The Maccabees and the Elephant Days

Elephant and Castle is undergoing a major 15 year transformation; yet amongst the unfamiliar sky scrapers, luxury modern apartments and recent pop-up coffee shops, The Maccabees are still staying put in their small SE1 studio using their musical brains to create a new album.

Following the release of their fourth album Marks To Prove It last summer, The Maccabees have teamed up with film directors James Caddick and James Cronin to create the documentary Elephant Days.

Marks to Prove it (2015) was released in July after two-and-a-half years of struggle, songwriting and recording in their Elephant and Castle studio, whilst Elephant Days shows footage of residents in the town on their daily routines showing a sense of community whilst they are preparing for the ongoing changes of the area. 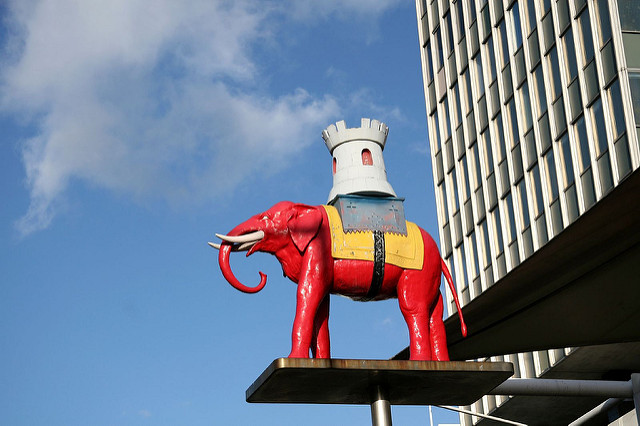 Orlando Weeks, the lead singer of The Maccabees, explains to Artefact how they commissioned the directors to collaborate for the film documentary.

“The reason we asked James was because we felt we shared such abilities, we were both in similar minds and we knew we were to have him and the other James in our studio for such a large amount  of time, so it was important that we could get along.”

“It that was a good starting point, and then the story and the theme would emerge, like something would just come out of it.”

The Maccabees recording and creating ideas for Marks To Prove It is just one segment of the film. Footage of the band giving up, remaining focused, searching for lyric inspiration and producing music are seen throughout the piece.

The heart of Elephant and Castle was where the band found inspiration to create their album, Orlando said Marks To Prove It was heavily influenced by the areas sounds and people.

Since the band’s arrival to their studio in 2012, they have seen a £3 billion redevelopment plan get underway, which is to be completed over the next 15 years as part of the Elephant and Castle regeneration scheme.

According to Southwark Council the regeneration will include the creation of a new pedestrianised town centre, a market square, 5,000 new and replacement homes, up to 450,000 square feet of retail space, and integrated public transport hub along with five green spaces.

Residents in the area, students at London College of Communication and The Maccabees themselves are already witnessing the current changes undergoing to the roundabout, which is just the beginning of the transformation of the area.

During the struggle to find new material for the fourth album, the band came across David Busfield’s photography of the Michael Faraday Memorial building at the centre of the Elephant and Castle roundabout. The memorial, which appears as a stainless steel box, was created in 1961, fills the area with light in the evening in memory of the late Victorian physicist.

This photography was the base for the album artwork; for the band it was “an extension to the album’s association with the area”.

Speaking to journalist Jenny Stevens in The Guardian back in July, Orlando says how the recording of endless demos and lists of various destinations to travel in order to find ideas forced the band to come very close to giving up.

At first the band didn’t plan to use Elephant and Castle as studio space, it was a mixture of luck and chance they landed in the Zone 1 area. He said they realised instead of travelling away to find music, he used the area which they have spent the past five years recording in for ideas.

Weeks tells Artefact, “I think the point was more to try and see that wherever you are or wherever we have ended up, which happened to be Elephant and Castle, would be enough inspiration and enough going on to make an album [and] make a documentary.”

He says this drove the concept behind the theme they had when making the album: “I think the records theme is more about, in the same way in what the film is really, its kind of filled with different short stories. Gentrification is just something that is going on around it.” 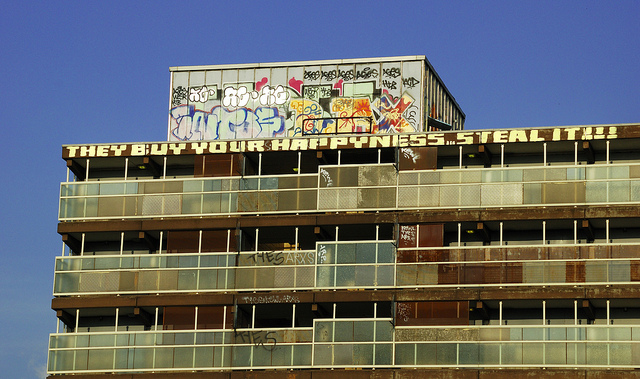 The ‘soon to be’ regenerated ‘Heygate Estate’ in Elephant & Castle, which was home to 1,500 families [Richard Fisher via Flickr CC]

Listening to Marks To Prove It you may not be transported directly to the Elephant and Castle shopping centre but Weeks mentions how the sounds from the area where used as a mark of the album making, for example you hear sounds of the area’s market in track seven Slow Sun.

“A lot of the time I start writing a song based on a line that I have read in a paper or overheard and that was defiantly true vision.”

“I try to build a song from something that I have heard like an echo, or something on the bus, or in a queue when I’m waiting at a cashpoint,” Weeks says Artefact.

“We did try and do some recording at the platform of Elephant and Castle train station to get the sound of a commute but we were a bit worried that we were looking suspicious sat on the platform with this 70’s mic, so we didn’t use it. The song on the record, Slow Sun, has some recording of the East Street Market.”

The use of quotes from past events are used as lyrics on the album, track five named Silence is based on the band’s guitarist Hugo White receiving a voicemail from his councillor to help come to terms with the death of his mum. The advice the councillor gave was used as lyrics for the song.

According to NME, River Song stems from the band “hearing a couple have a really sad argument heading up towards Newington Causeway.”

Elephant and Castle is also the theme for two forthcoming music videos taken from the album, using combined footage of different faces of the area.

Marks To Prove It shows shots of the Elephant and Castle roundabout, followed by scenes of chaotic traffic, whilst their second track release Something Like Happiness present a more quiet environment with architectural shots and plants growing in deserted alleyways; possibly links to the tree planting in the late Heygate Estate.

Weekes states, “We wanted to show its kind of ‘manicness’ with the commute aspect of the Elephant and Castle and I also wanted to try and make it look like there is still some kind of London architecture coffee table book style of it too.”

Produced by 2AM Films, Elephant Days premiered on October 12th at the Odeon Cinema in Haymarket.

It also shows the struggles with the rapid changes which comes with being in an area faced with re-development and the potential impact of gentrification.

Whether it be Arments Pie and Mash shop, the traditional restaurant established in 1914, muscling against the new pop up coffee shops, whilst maintaining a sense or originality of the old Elephant, or the Peckham Prides basketball team with the constant battle to strive for success.

Residents Richard and Layla are on a mission to attain colour in the area by creating gardens in derelict spaces, especially the late Heygate Estate.The vibrance of the area is reprinted through Natty, the local musician who regularly uses the local small business to tailor his wacky suits, and of course, The Maccabees, the band enclosed in the four walls of their studio, using Elephant and Castle as a source of inspiration to make their album. 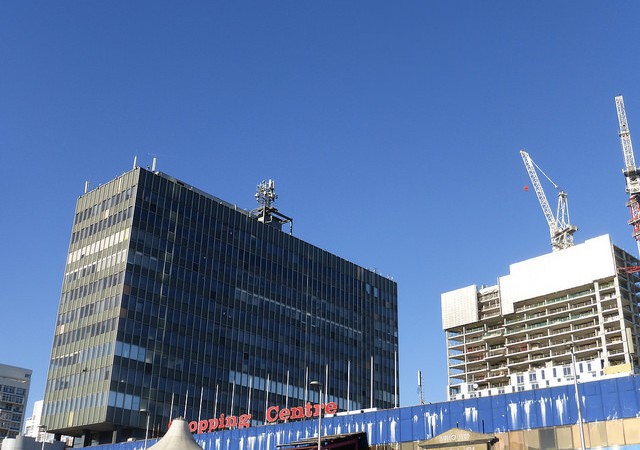 Transformations. The shopping centre was built in the 1960s [Mickey via Flickr CC]

The 83-minute film consists of short stories; it shows the sense of community and love the residents have for the area.

Inspired by British experimental film artists such as Patrick Keiller, the director’s aim was to capture the vibrance and character of the Elephant and Castle, which is at its tipping point of losing its identity due to the on-going effect of gentrification happening in London today.

James Caddick says: “I think the more problem for the area is that it is becoming generic, like putting all big buildings that all look the same and which cost a lot of money, I suppose that is more of the problem, as said in the film there is no meeting point, not even a big Tesco’s so its a incredibly diverse area, which is very interesting I think.”

With Elephant and Castle undergoing changes, new communities are moving in.

“I don’t think there is a connection, but there is an acceptance I guess and the respect they have for these different communities I guess, there seems to be a operation, harmonious fashion of inspiration and that is something to be commended isn’t it?”

“As James Cronin says if you lose that and if everything does become generic then it will be a less colourful place. As an artist I think it is probably an incredibly inspirational play to work and very useful in terms of being so central.”

Expanding the Elephant’s greenery in the derelict Heygate estate is Richard Reynolds, he and his partner are shown in the film using the empty buildings as a place to add colour and life endorsing the area with trees and plants. Reynolds describes in the film how Elephant and Castle is seen as the “underdog”, shots of the area in the film capture this ideology.

James Caddick defined a message he wanted the audience to leave with after they have watched the film: “I wanted it to be a film about people who are passionate about things and I wanted people to relate and make people think about that and care about that in our society, especially in an area that is going to be completely brought out with huge amounts of money- but not force that down people’s throats. It’s about individuals and people who are passionate about what they do.” 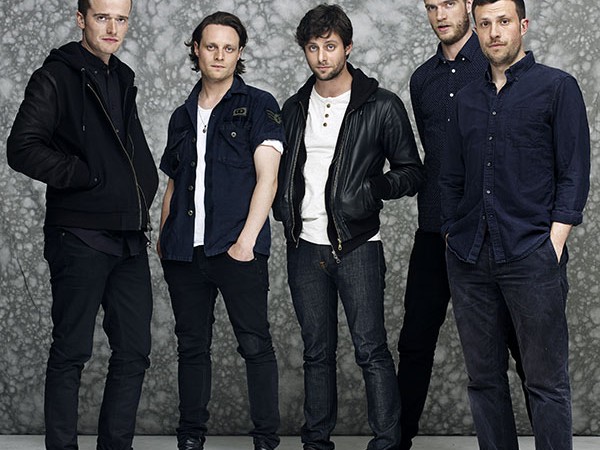 Orlando has captured the energy of the Elephant from being a past resident close to East Street Market. He describes the best parts of living in the area.

“I lived above East Street Market and so I enjoyed that and when I got the time I would be in the Elephant and Castle shopping centre, that’s still there and I like that. I hope that with all the changes going on, the kind of eccentricities that the area has are preserved somehow. I don’t know how that will happen.”

The Maccabees began their three months of touring around Europe in December last year, starting at London’s O2 and ending their tour in Madrid.

The band are aware that when returning to Elephant and Castle, they will already see distinct changes since they last packed their suitcase in their SE1 studio.