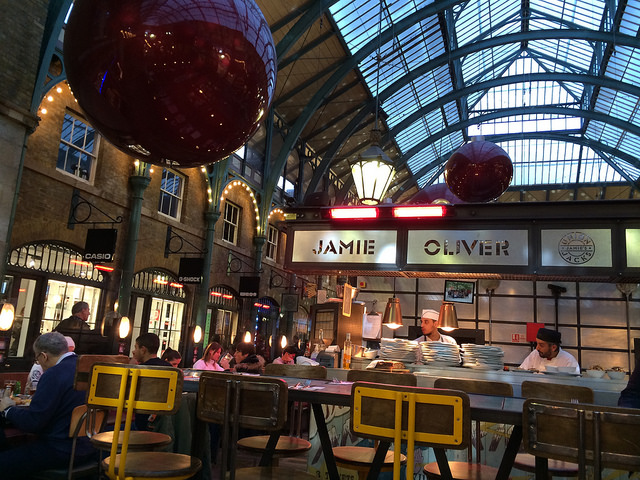 In the heart of Covent Garden there are a number of restaurants you can go to, but if you fancied a change of scenery and were feeling particularly healthy, Jamie Oliver’s restaurant, Union Jacks, may be the place for you.

Jamie Oliver describes this restaurant as “…all about bringing back nostalgic British classics” and when stepping into the restaurant you can feel that the rustic, outdoor decor adds to the British feeling.

You are greeted by polite waiters as you walk in and are seated, and the booths are equipped with seat warmers which is ideal in the colder months. 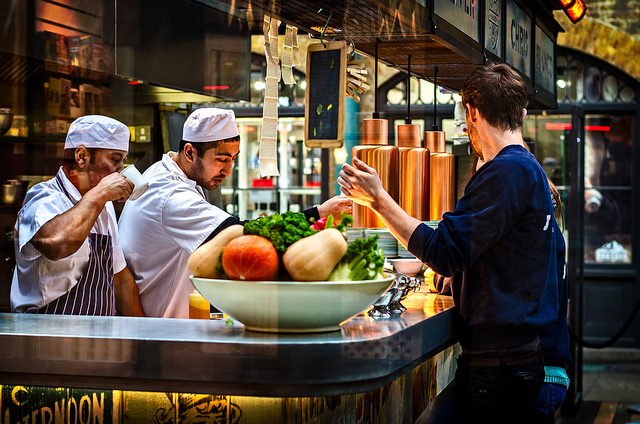 When looking at the menu I was intrigued to see there was not as much choice as I first thought, although it was understandable for it being such a small joint. It was the sort of menu that wouldn’t be out of place in a pub.

Featuring British classics such as steak, chips, lamb and chicken, the restaurant added its own little twist to each dish.

I opted for a margarita pizza (called ‘Margaret’ in the menu) and a side of chips. The drinks menu was very limited and apart from the alcoholic choices there were only a few options; fresh fruit juice, iced tea or water.

I asked the waiter if there were any alternatives and they did in fact have coke – which they served with a paper straw; not the best thing to drink out of as it became soggy!

The food didn’t take too long to come and as the restaurant was in the Covent Garden food court we could see everything that was happening outside.

There was a musician on the stage playing acoustic versions of classic songs such as Damien Rice – Cannonball, which provided a nice atmosphere while I waited for the food.

When the food finally arrived, I looked down to see a very large pizza. I knew i wouldn’t be able to eat it all by myself. The chips arrived and I asked for some mayonnaise, which to my surprise they did not have, and instead gave me some garlic butter.

I found it weird that they did not have mayonnaise, it’s a must with chips in my opinion.

None the less, the chips looked rustic and homemade, with some skin on them. The only downfall was they tasted very vinegary, as if they had been cooked in it, and as someone who does not like vinegar, was slightly off putting.

Despite this, the pizza was very tasty. Italian base, very thin, which is what I like, with a delicious crust. A few bits were burnt however that added to the rustic feel to the place.

Overall, the atmosphere was nice and cosy and the pizza was very tasty – however, I can’t see myself eating here again anytime soon.