by Desislava Todorova and Lauren Sharp – Video by Max Gayler

Almost 50 years after the release of his album David Bowie and with more than 140 million records sold worldwide – musical giant David Bowie passed away at the start of January 2016; he left legions of fans mourning over the loss of a culturally revolutionary leader.

Fans were shocked to learn of his 18-month battle with liver cancer, something the star kept to himself; many now believe he was referencing his deathbed in his most recent album, which contains lyrics like “Look up here I’m in heaven” and “I’ve got scars that can’t be seen”.

The response was immediate: millions of people across the globe took part in memorial services in celebration of his life and career; the day after his death fans gathered in his hometown in Brixton where they sang and celebrated his legendary work.

Artists and musicians paid tribute to the enormous influence Bowie had on their work, but also many young people in their 20s and 30s continue to feel his strong impact on their lives.

Being a pioneering champion in expressing sub-culture, Bowie continues to inspire many young people – from mod, hippie and 70s glam, to post-punk, avant-garde and Neo-Romanticism, Bowie was the living cultural reflection of more than four decades of transformation.

Seeing Ziggy Stardust live or even hearing Heroes and Fashion for the first time in 1977 and 1980 respectively, was extraordinary. Heroes reached number six in the overall artist rankings.

What has been striking is the fact that nearly a decade since Bowie’s last tour, people in their 20s still find his work and career powerful, and young people shared the sense of grief and despair with their parents who witnessed Bowie’s rise.

In the light of his death, actor and comedian Simon Pegg reflected on the musician’s death : “If you’re sad today, just remember the world is over four billion years old and you somehow managed to exist at the same time as David Bowie.” 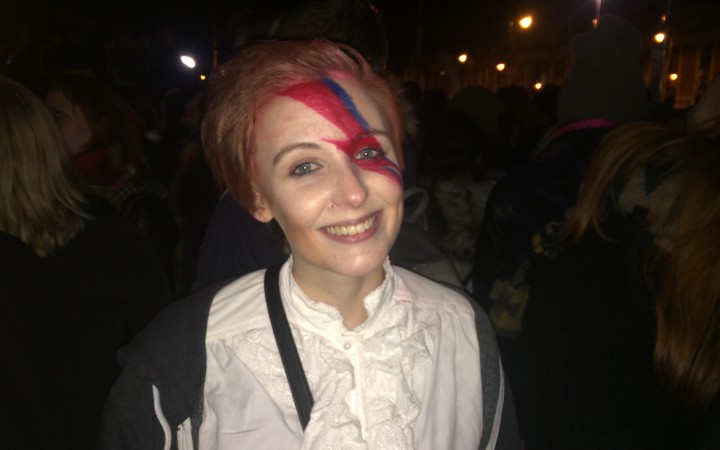 Fans made a pilgrimage to his hometown, Brixton after his death, and saw the streets glittered with flowers and stardust, reminiscent celebrating the life of the man himself; thousands of fans from all ages came together along with guitars and speakers to play his music.

Brixton also saw locals paying tribute in other ways. In Pop Brixton, one local DJ who owns Bowie’s entire discography, organised a theme night while one of London’s newest cocktail bars, Machine No3, and O’Neill’s in Beckenham organised DJ nights with best-outfit prizes.

Attending the Brixton party was 25-year-old Rebecca Brown, daughter of Bowie’s Spanish interpreter, who considers herself a life-long fan:”My mother was his interpreter when he visited Spain on the Glass Spiders Tour in 1987. She describes him as a very well spoken, very kind and a true English gentleman, I don’t know who fancied him more, my mum or my dad. He had a profound effect on everybody, every artistic genre you can imagine, but he kept his life very private which is sadly why now we know he is no longer here.” 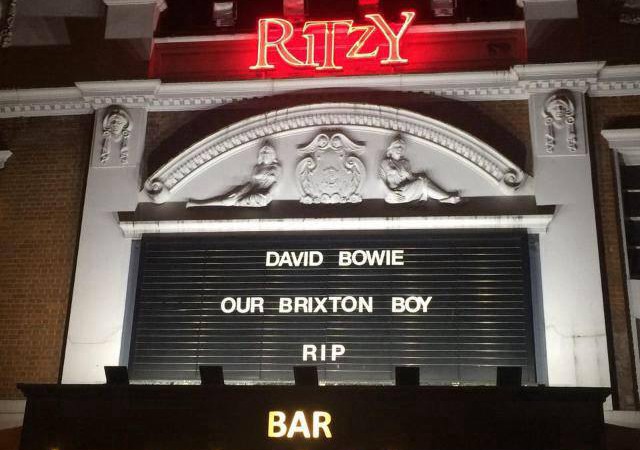 Many of those in their twenties flooding outside the Ritzy cinema in Brixton, discussed how Bowie’s music has been passed down though their parents’ record collection when growing up.

One 25-year-old student from Kingston showed his admiration for the artist: “I admire the fact that he would be everything he wanted to be, he is one of the best people that Britain has ever produced. The whole Ziggy Stardust outlines on that you can be whoever you want to be. He made it cool to be weird, Let’s Dance was what properly got me into Bowie”.

A City University student from the United States described David Bowie in one sentence: “He was avant-garde, he saw the world differently and it gives you a different perspective on things, constantly revolutionising himself.”

His 1950s tailored sharp suits and snappy striped ties were just the starting point of his fashion and cultural journey.

A cornerstone in his career was his meeting with British choreographer and mime artist Lindsay Kemp; it was thanks to him that the stage persona Ziggy Stardust was born. His influence on Bowie’s work had some sort of liberation note which educated the young Bowie to “free his body” , according to Kemp.

An essential extension to Kemp’s pantomime was the art of kabuki, which led Bowie to spend a few years in Japan where he would work on “the inner beauty through gestures” and would eventually come back to England.

Thanks to this thorough inner self-experimentation and research, Bowie’s androgyny was reflected in the edition of “onnagata” which consists of male actors playing female roles wearing exotic costumes. 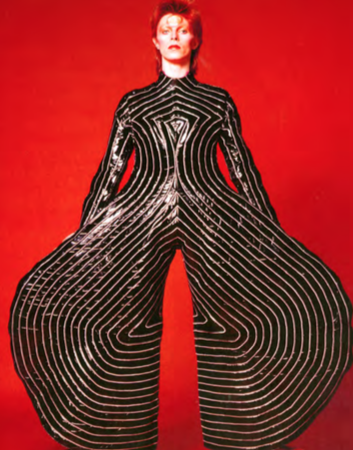 27-year-old Dave Rudd from Camden has been a follower of Bowie from the age of four, when he first watched the film Labyrinth in which Bowie starred.

For him the 1971 album Hunky Dory was his introduction to David Bowie musically when he was aged 17, after which he became an influence in all aspects of his life: “His eclectic style introduced me to fashion. His kooky characters in films introduced me to cinema. Bowie has creatively educated me and shaped my taste into the man I am today.”

One such character is Ziggy Stardust, a colourful androgynous alien from Mars. This was the most popular alter-ego of Bowie amongst the younger generation.

For his album Aladdin Sane in 1973, the famous “lightning bolt” make-up was created by Pierre Laroche and the new Bowie persona styled by Celia Philo. The stylist also happens to be the mother of Phoebe Philo, now main designer at French fashion house CÉLINE. 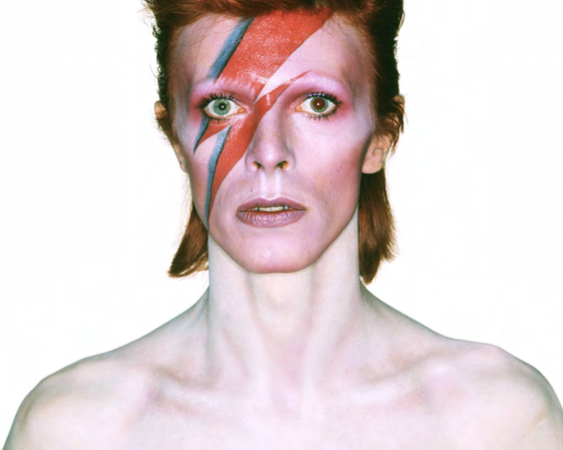 Many of David Bowie’s songs are based around timeless issues like mental health, due to his late brother committing suicide in 1985. He used his music to express emotions and the plight of mental health.

His song All The Mad Men directly refers to “a nation hides its organic minds in a cellar dark and grim”, considering how mental health is hidden away in society and we should take more time to make notice of the issue, something unheard of in the 1970s.

Eighteen-year-old Adam Farrell said listening to Bowie’s music helped him overcome his mental health disorder, which first occurred in his early teenage years, when he suffered with low self-esteem and bouts of depression: “It was by coincidence really but I was watching an old Top of the Pops episode on BBC Three and he came on singing Jean Genie. It was very nostalgic and it made me smile when not many things had done in a while.”

He added: “I think he stands for everything that’s weird and wonderful in the world, and that it’s okay to not be okay. Being different is cool, you just have to own it.”

Aman Ubhi remembered seeing hearing Bowie in the late 1980s: “I had Let’s Dance recorded behind some Christmas special…I was hooked by the sound, the look and I was mesmerised as I got older I discovered his earlier work and the transition that he had from David Jones to Ziggy Stardust and later his reinventions. I was in awe with this performer: so confident and other worldly. I found inspiration from his attitude and ability to transport you on a sound journey always uplifting and magical.”

“I think he was more like a phenomenon rather than a pop star.”
Aman Ubhi

Ashley Sharkey, aged 21, who is a David Bowie memorabilia collector said “Ziggy Stardust taught me to always be yourself, it’s okay to be that weird girl with the bright blue and pink hair. Visual expression is a wonderful, beautiful thing which I found instills a lot of confidence in yourself. Never fall into the black and white and fade into the crowd.”

Bulgarian student Alexandra Marinova said that she didn’t remember the first time when she heard his songs but she clearly remembered the first video she saw. It was Life on Mars and she was shocked. She somehow related her main hobby, astronomy to Space Oddity and thought that it was cool hunting for asteroids and listening to Starman. 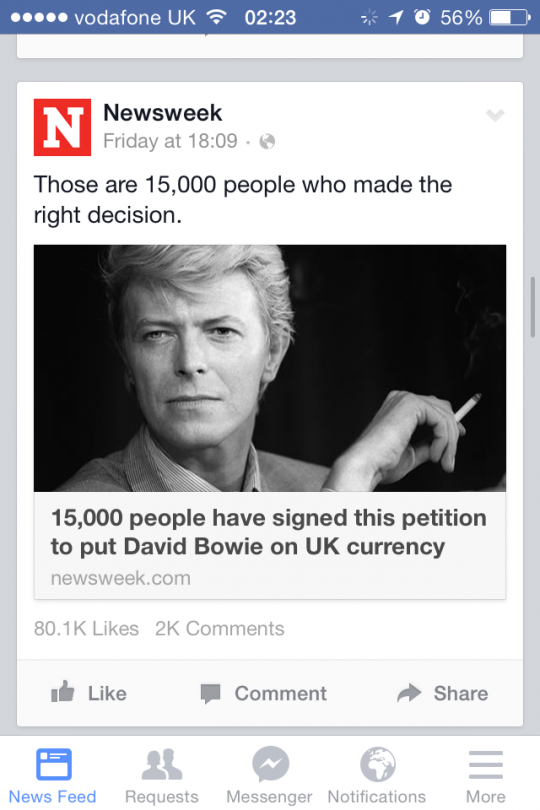 She also shared that there were times where she would just light up a cigarette and sit quiet and listen to his poetry because she didn’t care so much about his physical appearance or how people looked at him. “He’s a damn poet. His music needs to be listened to.”

“There is nobody else quite like him. It has been ages since he appeared as Ziggy Stardust and people keep copying him. I’m saying copying because you’ve probably seen Madonna, Lady Gaga or a bunch of X-Factor stars, so you know how they look like. He was a genius in everything he was doing. Consider his last video and his last album.”

Perhaps, in the age of X-Factor, Bowie spoke to a generation bored with sanitised pop commercialism.

In Brixton another young couple said that Moonage Daydream was a particular favourite: “I love the colour of the music, I’m more confident in my weirdness because of him. I love the fact that he was willing to stand up as a bisexual, as a gay man, which has given me that example to stand up for who I was, not giving a fuck about anyone else.”

Artists and musicians from all over the world took part in their own ways of sharing the grief. Arcade Fire have announced a collaboration with the Preservation Hall Jazz Band to organise a Bowie memorial parade Pretty Things: A second life for Bowie which took place on January 16 in New Orleans. 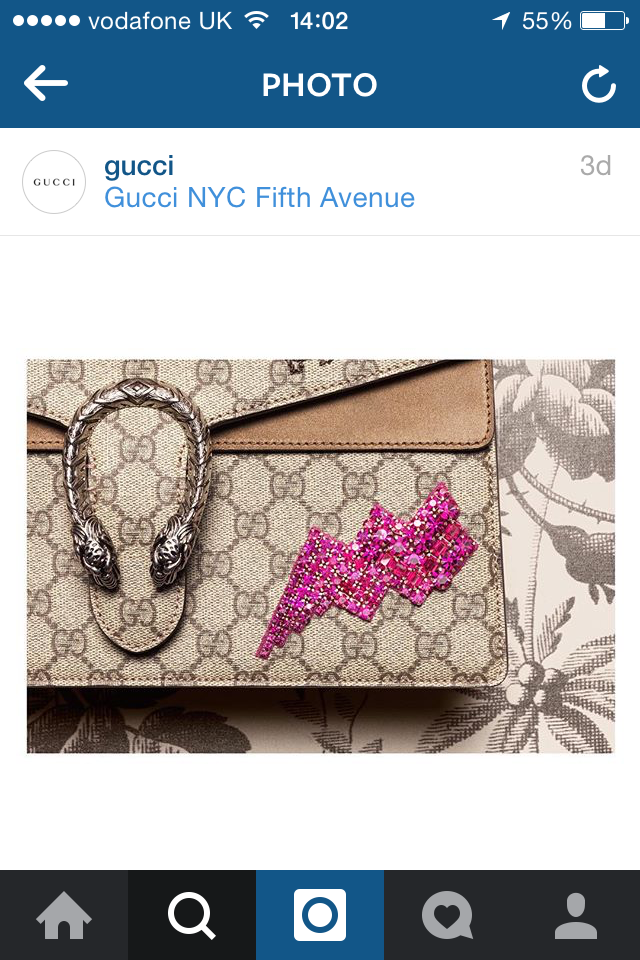 The fashion world also saw an immediate reaction. The musician’s death coincided with the last day of London Collections Men (Fashion Week), and in his honour many visitors paId tribute by wearing Ziggy Stardust T-shirts.

Multiple shows made last-minute changes in their models make-up adding glitter as a reference to Bowie’s stage persona.

Model Hayett McCarthy paid her tribute to the musical icon by writing Bowie on her palms at Kensington Gardens during Burberry’s Autumn/Winter 2016 show. Two of Bowie’s cult hits, Changes and Oh you pretty things, were played.

Sir Paul Smith also expressed his huge influence by recreating his original shop from the 1970s as a setting for his presentation and Bowie’s images were present throughout the whole display. Smith also created the infamous T-shirt for David Bowie’s last album Blackstar. 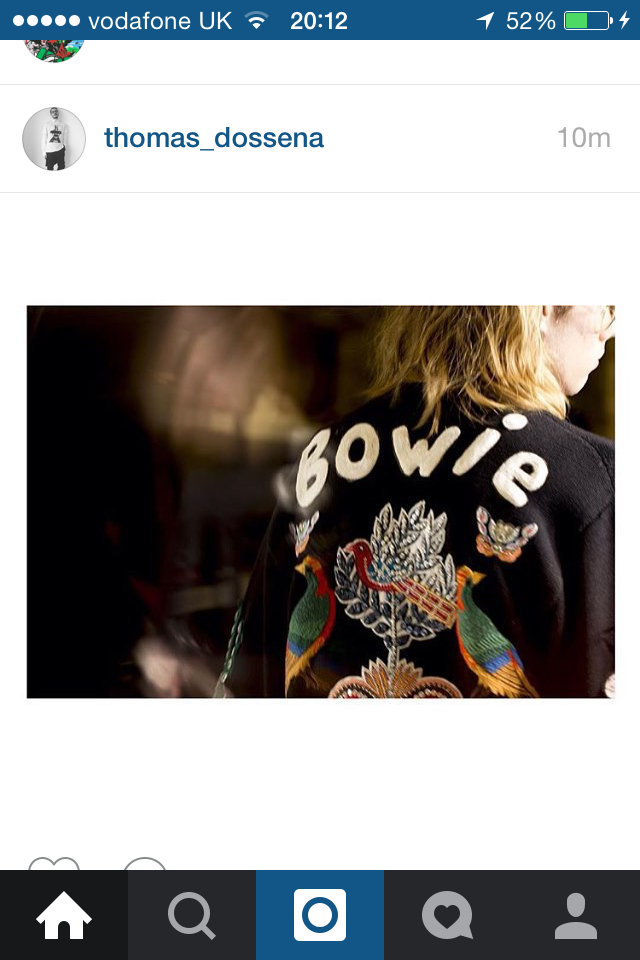 Bowie’s impact continued to be strongly distinguished in the following week, at Pitti Uomo, men’s fashion week in Florence.

During Monday’s Gucci Men’s catwalk show, Alessando Michele paid homage to Bowie by staging a sequinned jacket with a heart and Bowie’s name written on the back.

The legend’s impact on the brand could be defined by the 1970s influence that Michele used in order to rebrand Gucci.

Back in 2012, the Italian house sponsored V&A’s “Bowie Is” exhibition, which put focus on David Bowie’s style influence on modern culture.

In an interview for Vogue, Belgian designer Dries Van Noten said that Bowie “opened the great, big gates to our future and sparked in us that creativity that proves vital even tot his day”.

The designer chose the 1977 cult hit Heroes for the closing of his Autumn/Winter 2011 womenswear show.

This same season, the menswear collection has also been directly influenced by Bowie’s artistic attitude. Models had their hair dyed bright red, which was influenced by the cover of Low.

Whether it’s fashion, culture, timeless personal issues or social outcast Bowie has opened a window to each universal theme of all ages.

So, David Bowie, we thank you for your make-up, your high-heeled boots, your alter-egos and your stardust and self-expression. You have taken us on your incredible spaceship journey to eternity, and still doing it after leaving us with the album Blackstar. 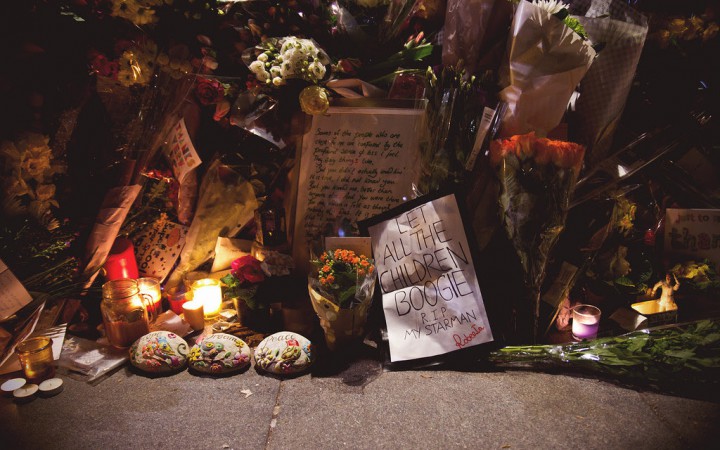