Little did they know this night sowed the seeds for the punk movement in the UK. In November, to commemorate the 40th anniversary of their first ever performance, the college, now called Central Saint Martins (CSM), and in new buildings at King’s Cross, held a Sex Pistols-themed evening called “Be Reasonable Demand The Impossible“.

Attending the event was the original bass player from the Sex Pistols, Glen Matlock a CSM alumnus, along with his college friend Sebastian Conran who attended the 1975 gig.

Together, they spoke of the original gig’s events, as well as how punk is still an influence in the fashion scene.

Looking around CSM, sipping a beer, Matlock said: “It was exciting, I left some lifelong friends at Saint Martins, they were the more rakish, more off the wall people in Soho. It was when things were beginning to change.”

Jarvis Cocker, the frontman for the band Pulp attended CSM in 1988.

Speaking to the Guardian back in 2009, he explained  how art school can be an advantage for musicians: “The experience of just being at art school gave me a lot to draw on, in a deeper level I was taught to think about things in a non-lateral way,” he said.

Ealing Art College graduate Pete Townshend also noted the advantages: “The art schools from my time specialised in old-school teaching methods of brutalising your students with some wild thinking that was off the map”. This “wild thinking” lead him to form early punk band The Who, an early influence on the Sex Pistols.

Matlock,  during the event I attended, was very warm and welcoming and he began talking to me about how different CSM is now from when he was a student in the old Charing Cross Road building.

Looking up from outside the canteen he joked: “To me, it looks like a hospital, Northwick Park Hospital. I thought there would be a lot of art on the walls and there’s not. There is a nice coffee machine and a table tennis table but maybe the work goes on inside.”

Matlock added that it was almost a trend to study art in order to form a band.

“I went to art school because I could draw a bit. Every band of any consequence had gone to art college and that’s why I went, to get a band,” he said. “But it happened to be that the band I got into I met outside of art school so I introduced them to art school things a little bit.”

Whilst studying at CSM Matlock worked in Malcolm McLaren’s shop on King’s Road, Chelsea. McLaren was soon to become the Sex Pistols’ manager and clothes designer and, with his partner Vivienne Westwood, they changed the face of fashion founding what became the punk movement in the UK.

Matlock states “Punk didn’t exist, it just happened. We all assembled at Malcolm McLaren’s shop. He didn’t put us together it was just the location where we all came together”.

After forming a band at McLaren’s shop, the Pistols wanted a venue to perform live, and Matlock arranged for them to support a band called  Bazooka Joe at St Martin’s.

Young and penniless, the band turned up equipment-less in the hope the headlining act would let them borrow their kit.

After 20 minutes of what some people described as “horrific music” the plug was pulled and the band were taken off stage. Looking back at the night Matlock tells me the reasons why the band were more lively than the headline act.

“Just before the show Malcolm brought us a bottle of our favourite alcohol and that kind of kicked in as we started playing so that illustrates why John was a bit lairy.”

Undoubtably CSM has changed since the Sex Pistols’ infamous gig. Matlock’s days at the college were spent sipping beer in the drinking clubs in Soho where he found inspiration for his songs, in particular Pretty Vacant.

“It was fantastic,” he said. “I was 17 and being in the middle of Soho is really quite exciting, a time to explore, it was the cusp of when things where beginning to change”. 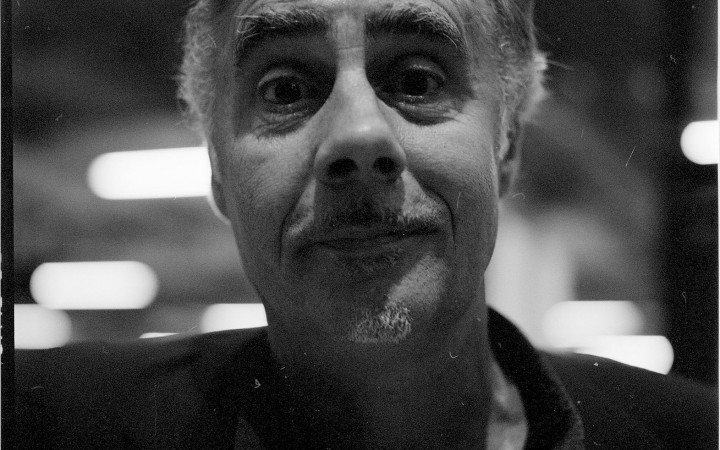 Speaking to Glen Matlock at CSM. Image by Mathias Gontard

Art school provided an opportunity for those who did not want to attend university.

According to Matlock it was a time for “breathing space” for most 17 year olds. “When I started you needed O Levels to get in, before then, you didn’t have to.

You would get “square pegs” that could draw and were so concentrated in art school and I don’t think you get that so much now, you need Maths and English qualifications, that’s the difference.”

Although the Sex Pistols were arguably not the first punk band, they defined the image of the punk movement, with help from Malcolm McLaren and Vivienne Westwood in their SEX shop on the King’s Road.

Like the music, the clothing introduced ideas of freedom and rebelling against the “normal”. McLaren’s slogan “the look of music and the sound of fashion” was part of the making of the Sex Pistols, entwining fashion and music, just like the psychedelic shirts of Jimi Hendrix, the glam and androgynous look of David Bowie, The Jam’s Fred Perry shirts and Elvis Presley all shook up in a blazer.

Malcolm brought us a bottle of our favourite alcohol and that kind of kicked in as we started playing so that illustrates why John was a bit lairy.

Dean Mayo Davies a freelance fashion writer who has worked for publications such as Dazed and Confused and i-D, attended the “Be Reasonable Demand the Impossible” evening. He explained how punk has been an ongoing influence.

“I suppose punk today is very different since back then they were the first ones to put a label and create the scene” he said. “Today it’s a lot more about subversion, particularly Japanese designers, like Comme Des Garcons were inspired by them. It is a kind of language which is beyond western clothing and that’s what Malcolm McLaren was doing”.

Co-organiser of the event Paul Gorman is currently writing a biography of McLaren. Inspired by McLaren’s attitude of anti corporatisation and non-conformity ‘do-it-yourself’ attitude and honest creativity without focussing on money, he conceived “Be Reasonable Demand the Impossible”.

He and his wife Caz Facey first approached the owners of the old St Martin’s building, now a luxury apartment block, but, says Gorman, they “wanted to celebrate in a commercial and corporate way and obviously we are all anti that kind of corporate adaption and corporatisation of London”.  So they brought the event to CSM, to emphasise the importance of art schools to the city and on culture.

Gorman explained that the Sex Pistols didn’t want to reform like many acts would, “cashing in” on the idea. So far we have seen the likes of The Police reforming in 2008 to celebrate their 30th anniversary, the remaining members of Nirvana celebrating one night only a 25 year anniversary just last year, and of course the 50th anniversary of the Rolling Stones for a worldwide tour in 2012.

“It was 50p to go and see the Sex Pistols in 1975 and it’s free to come here tonight,” he says. “Nobody is making any money from it. This sounds crap but it is quite punk to be doing this, sort of slightly off the radar because when they first played they were totally off the radar”.

Sebastian Conran, a CSM alumnus, stood in the crowd the night the Sex Pistols took to the St Martin’s stage. Staying in his memory most is Johnny Rotten spending most of his time blowing his nose with a handkerchief into the microphone while playing many Monkees cover songs. Looking back on the night he says: “Most respected people at the college really liked it, others were really shocked and horrified describing them as ‘revolting’ as it went on it felt like some great art movement. I was unbelievably naive, as Malcolm McLaren said it was an attitude thing”.

The Sex Pistols were catapulted to national notoriety the following year after their live television interview on the Bill Grundy Today Show during which guitarist Steve Jones uttered a series of F words, shocking in 1970s Britain. The next day headlines dedicated to the Sex Pistols filled national newspapers, thus enhancing their musical career.

Matlock says everything changed for the band after appearing on the the show: “It all completely changed overnight,” he said. “It was different and none of us were equipped to deal with it, Malcolm did most of it. Instead of it being a band by the kids for the kids like in the early days before The Who it became a media exercise.”

No matter how much outrage and controversy the Sex Pistols caused among the older generation and the general public, they became the voice of youth and punk. The Sex Pistols were celebrating the amateur with an honest creativity.

“We [Sex Pistols, Matlock and Westwood] were all these people in the same place at the same time. It happened to us because everyone was looking for something.

Everybody knew exactly what they didn’t want but didn’t know what they did want. When we arrived on the scene…it was what we had been looking for, but never knew we needed.”

Feature Image by: Hulton-Deutsch Collection/CORBIS
All other images by: Mathias Gontard