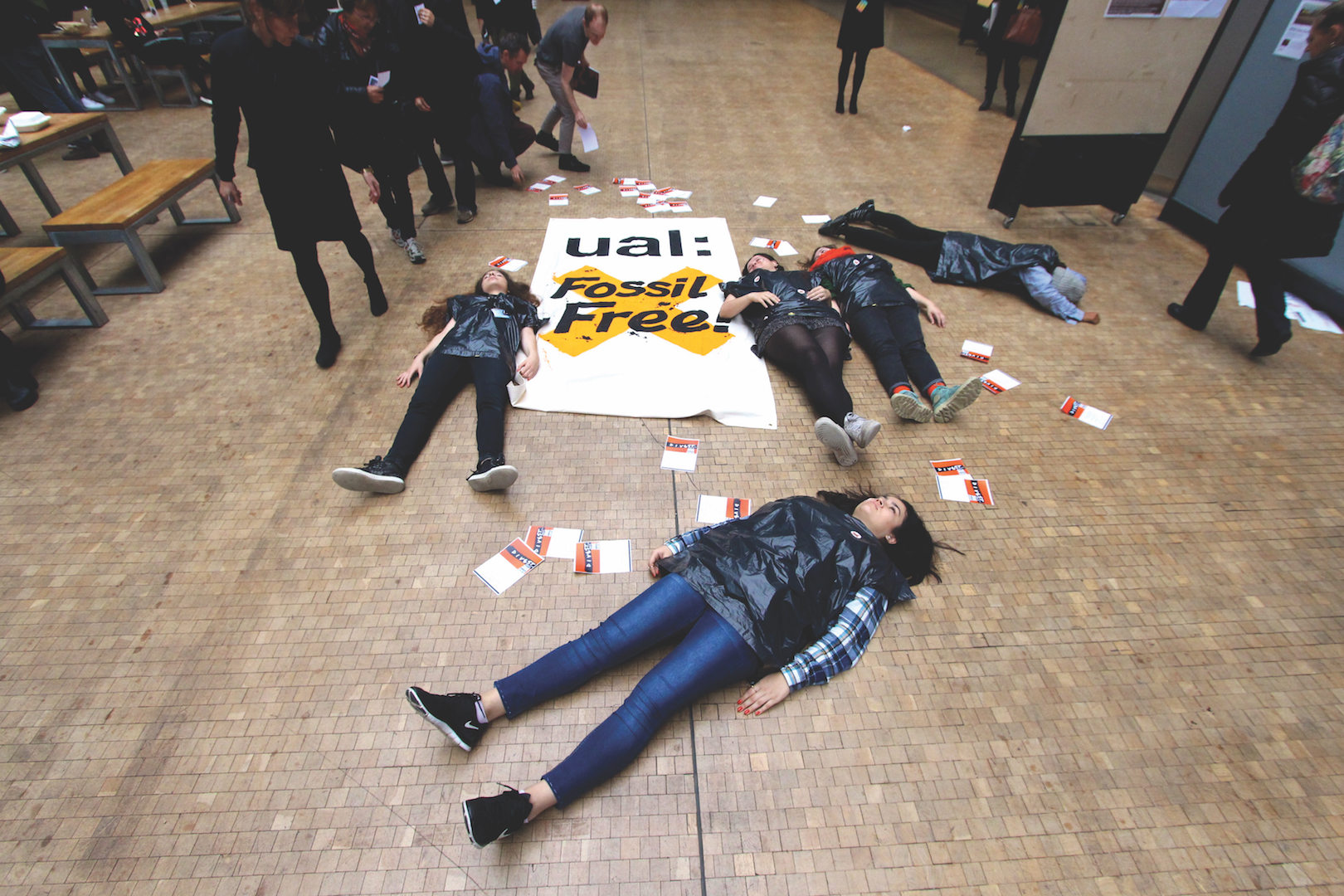 In February 2013, UAL Vice Chancellor Nigel Carrington signed the People & Planet ‘Green Education Pledge’ committing UAL to a clear position of engagement with sustainability. In my new role as an artist on a placement, I wrote to him to say that this pledge was a bold and admirable move. But we’d need to act fast, if we’re to keep up with the leadership being shown by the students.

UAL banks with National Westminster, which is wholly owned by the Royal Bank of Scotland (RBS). During the times of easy credit, RBS made so many reckless loans that in 2008 it had to be bailed out with £45 billion of public money. A Cabinet Office spokesperson said: “The failure of RBS played an important role in the financial crisis of 2008/9 which, together with other macroeconomic factors, triggered the worst recession in the UK since the Second World War”. When the disgraced Chief Executive Officer of RBS, Sir Fred Goodwin, was stripped of his knighthood, the UK Chancellor George Osborne commented: “RBS came to symbolise everything that went wrong in the British economy in the last decade”.

RBS branded itself as ‘The Oil and Gas Bank’, investing aggressively in extreme fossil fuels, including extracting shale gas by ‘fracking’, which poisons vast quantities of drinking water and compounds climate damage from burning hydrocarbons, through the leakage of unburned methane gas. RBS is a major source of finance for tar sands oil extraction in Alberta, Canada. Destroying the wilderness, extracting oil from tar sands also emits up to four times more CO2 per unit of energy than conventional drilling.

RBS branded itself as ‘The Oil and Gas Bank’, investing aggressively in extreme fossil fuels

RBS has also funded a devastating mountaintop removal for opencast coalmines in the Appalachian Mountains in the USA. Between the years of 2005 and 2011 RBS financed coal mining and power companies with £9.4 billion. Polly Higgins, a leading international lawyer, is working for the term ‘ecocide’, the destruction of our living ecosystem, to be officially recognised as a crime against peace. If she and her colleagues succeed, RBS could be tried in the International Criminal Court for their key role in financing ecocide.

So this pulls our relationship with RBS into question. Should we try to engage RBS in dialogue about the transition to a zero carbon society? If it’s true that UAL has borrowed £200 million from RBS, could that mean that we’ve no hope of influencing RBS because they have power over us? Or at the other end of the scale, could our enormous institutional debt make us a valued customer?

I’ve proposed since 2013 that UAL should divest any funds it has invested in fossil fuels, and reinvest in energy that is not only renewable, but also decentralised, diversified and democratically controlled. I have written to key people in UAL — the Vice Chancellor, Director of Strategic Development, Director of Finance and UAL Head of Sustainability — providing summaries of the latest research connecting climate change and the nancial system, and warning of the risk of reputational damage through being associated with RBS.

Across UAL I have given lectures about art, climate change and finance, and argued for divestment. In response, a group of students came forward to form ‘Divest UAL’. They set up an online petition and Facebook group, went on marches, held stalls at UAL events, and submitted a Freedom of Information requests. They also staged ‘die-ins’ which supported the factual research and practical actions by demonstrating courage and solidarity.

The Divest UAL group has inspired me. More importantly, they’ve got a result: in November 2015, UAL announced that it will divest its endowments of £3.9 million from fossil fuels, and sign the United Nations Principles for Responsible Investment. Congratulations are due to the UAL Fossil Free team, and to UAL for listening to them!

November 2015, UAL announced that it will divest its endowments of £3.9 million from fossil fuels, and sign the United Nations Principles for Responsible Investment

Positive thinkers might see this as a sign that research, reasoned arguments and creative actions can have a profound effect. Realists might remind us that the sum divested is only a fraction of the university’s total funds (UAL’s annual report for 2015 says our total income is £263.8 million, and our net assets are £254 million). Critical thinkers might ask: “What is the difference between a token gesture and a transformative change? Should we judge an action by the intention, or by the outcome?” Ecological thinkers and artists might agree that the link between cause and effect is rarely ever simple or straightforward.

Sometimes the law of unintended consequences can create surprising opportunities. For example, through its Green Paper, the government is pushing for fundamental changes to higher education. Dr Andrew McGettigan observes that the proposed changes include:

– freeing up universities to change their own governance structures

– ending universities’ obligation to oper- ate in the public interest

These proposals are designed to destroy education as a public good. But used differently, they could allow us to transform UAL into the university we want. As an experiment in co-determination, we could get together and envision UAL as a truly sustainable organisation.

Through a series of talks and discussions, an exhibition of videos, maps, diagrams, sculptures, paintings, and performances, we could develop a model of UAL as it might be. Here’s what I would like to see: UAL as a co-operatively owned and managed, not-for-profit social enterprise.

Under ‘Business As Usual’, studying art and design has been about acquiring transferrable skills of innovation and enterprise to boost employability in the creative industries. But there’d be no jobs on a dead planet! Besides, artists and designers can do more than deliver creativity to industry — they can resist the monoculture of thought, and contribute to the cultural transition to ecological sustainability and social justice.

The Global Divestment campaign has united critical thinking and creative action to revoke the fossil fuel industry’s “social license to operate”. The 2015 Paris Climate deal has signalled the end of fossil fuels. Now, by acting together through our university, we have a rare chance to protect what we value and make something amazing happen. Our future depends on our ability to envision alternative possibilities, and to choose from amongst them as an act of free will.