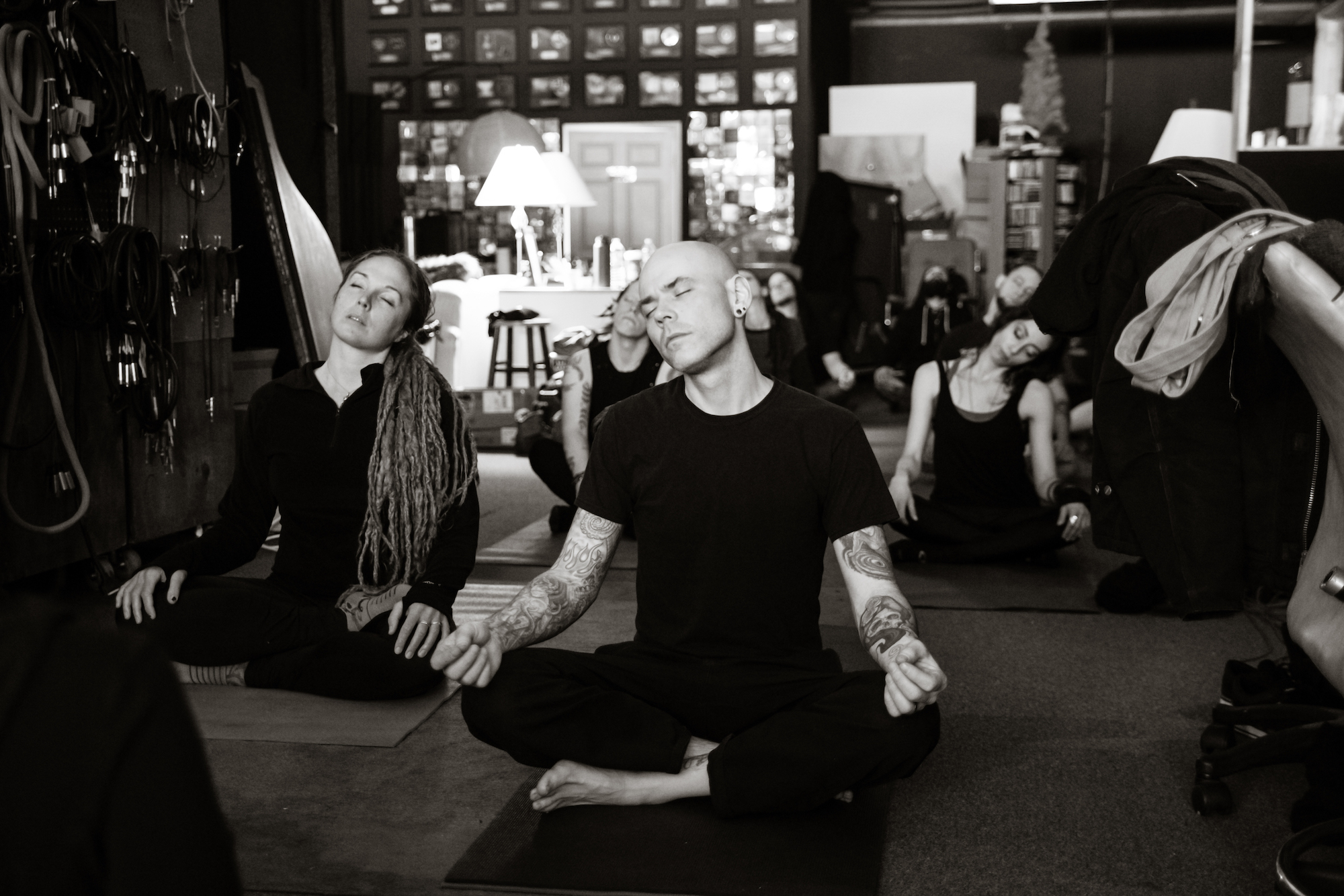 Since enjoying a boom in popularity during the Swinging Sixties, yoga has become an increasingly important part of modern life in the West, with people from all sections of society turning to the ancient practice in an attempt to achieve spiritual, mental and physical wellbeing.

As a result, new forms are continuing to spring up, with each one trying to adapt to the particular community in which they are operating.

A largely newfound interest in Hindu spirituality was what first kicked-off the West’s 1960s yoga revolution, whilst the penetration of New Age ideals into the heart of Western culture in the following two decades resulted in an increase in the number of adherents to the discipline.

Since then, true to its etymological roots (in Verdic Sanskrit the word refers to “union”), yoga has become a practice for everybody, taking on separate forms in different communities in an attempt to bring peace and harmony to all.

From hip-hop yoga to Madonna-inspired “voga”, there is now something for each and every one of us, and the latest to join this long line of interesting variations on the 2,500-year-old practice is Black Yoga, a group that aim to discover the light using the darkness of heavy metal music.

On the surface, the idea of doing yoga to the chaotic and relentless pounding of metal sounds like an oxymoronic idea, one that is detached from the image of wind chimes and chirping birds that are so often associated with the practice.

However, delve beneath the surface and you realise that the pairing isn’t quite as odd as it first seems.

Over the decades, metal has undergone a transformation just as radical as yoga, resulting in a plethora of sub-genres and communities that are centred around creating meditative, trance-inducing, and visceral music that has as much in common with the ambient sounds of Brian Eno as it does with Metallica.

Occult and New Age ideas have also filtered into the genre, so it’s no wonder that the next step was to couple it with yoga in an attempt to lift both to new heights of consciousness.

Run by husband and wife Scott and Kimee Massie since 2012, Pennsylvania-based Black Yoga came to be on a road trip as the duo listened to an album by the doom-jazz quartet Bohren & der Club of Gore.

Interested by the idea of combining vinyasa yoga with ambient metal and doom-laden drone (Kimee is a trained yoga instructor whilst Scott used to play in a band called Storm King), they quickly set about creating mixes of meditation music whilst searching for a place to house their new vision.

What was initially created as, in the words of Scott, “a new class for ourselves that had music we liked” quickly snowballed into something bigger, and as time went on an increasing number of people began to find a home for themselves in the Monroeville-based group’s weekly meetings. 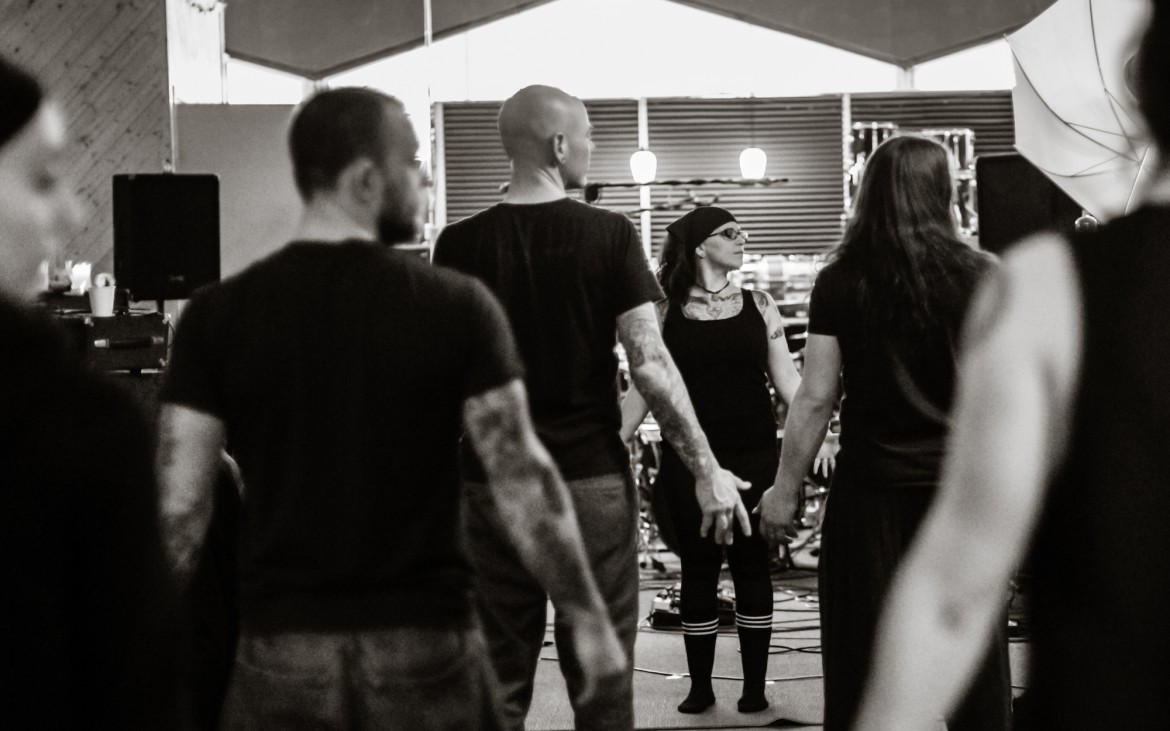 Speaking on the subject of pairing yoga with what for many would be classified as dark and depressing music, Scott believes that the similarities between what they do and more “traditional” classes are greater than many realise.

“It’s not such an odd pairing, really,” he told Artefact. “A lot of the music that we use shares the same properties as more traditional meditation music; we just swap out droning sitars for droning guitars.

“I mean, it’s more than that, but I think a lot of people who first hear of it have a knee-jerk reaction because they hear anything related to ‘metal’ and just assume it’s us trying to use Ride the Lightning or something.”

For Scott, Kimee, and those who attend their classes, the choice of music is all about being able to attain spiritual, mental, and physical wellbeing whilst feeling relaxed and secure in an environmental that fits their tastes.

“I don’t think what we listen to in class is any different for us as listening to an Enya record is for other people,” Scott explained.

“The class Kimee teaches is essentially the same one as she might teach at a regular studio, it just makes us and our demographic feel more comfortable.”

As has been the case with almost every modern variation of yoga – not to mention what some see as an increasing Westernisation or even cultural appropriation of Eastern disciplines and spiritual practices – there were always going to be people that don’t like the direction that Black Yoga have decided to follow, but Scott says that people’s reactions have never played a role in what they do.

“The reaction has been split the entire time. It’s resonated with some people on a very deep and meaningful level right away, whilst others were going to hate it no matter what,” he said. “That’s just the way the world works, and we’re okay with it.

“And, yes, there’s been a number of sceptical people over the last few years who have tried our class and ended up getting into it once they realised we weren’t sacrificing goats or doing drugs.”

At the dawn of Black Yoga, Scott and Kimee, alongside their friend Chad Hammitt, created tailor-made mixes of music to accompany each session, but the growth in popularity of the group has resulted in them composing their own music in an attempt to further realise their ideas.

Asanas Ritual, Vol. 1 is an 80-minute journey through dark and brooding soundscapes that seamlessly merge together to create an intense and meditative experience.

Created by an eclectic ensemble of likeminded musicians, the song-writing process for the album started in 2014, when Scott and Kimee decided that their classes could benefit from specifically crafted music that had their brand of yoga in mind.

“We started talking about making our own music for this soon after it got started,” Scott explained.

“We didn’t totally realise it at first, because we didn’t know what it was yet, but we were essentially making blueprints with our mixtapes before, learning how to make the soundtracks flow with the classes that Kimee teaches.

“The music fits a certain structure, but it wanders in its own direction depending on the particular mix.

“We definitely have more control over it when we’re writing. That was the impetus. But then the music took on its own, yoga-like properties.

“The songs began to stretch out and flow on their own, creating a whole new process where our artistic selves met with our practice. The two became one.”

Fast-forward to October 2015 and Asanas Ritual, Vol. 1 finally saw the light of day, with the increasing popularity of Black Yoga resulting in them releasing the CD to the world via their online store.

Also released alongside the CD was a DVD by the same name, which includes a one-hour class led by Kimee that students can follow in the comfort of their own homes.

Well-received and in high demand across the globe, the success of Asanas Ritual, Vol. 1 indicates that there is a hunger for Black Yoga outside Pennsylvania.

With Scott himself saying that they plan to branch out to other countries in the future, it may not be long before the Black Yoga revolution finally reaches the shores of the United Kingdom.