The word gentrification gets thrown around a lot at the moment. All you really need is a Twitter account and a small dose of romanticism to get onboard with the crusade against our ‘shitty, rich-landlord infected city that’s becoming like an overly yuppified scene from American Psycho’.

And while it’s definitely true that London is in the middle of a weird transition, it’s probably closer to something from the transcendentally meditated dreams of David Lynch. At least in the present moment anyway. 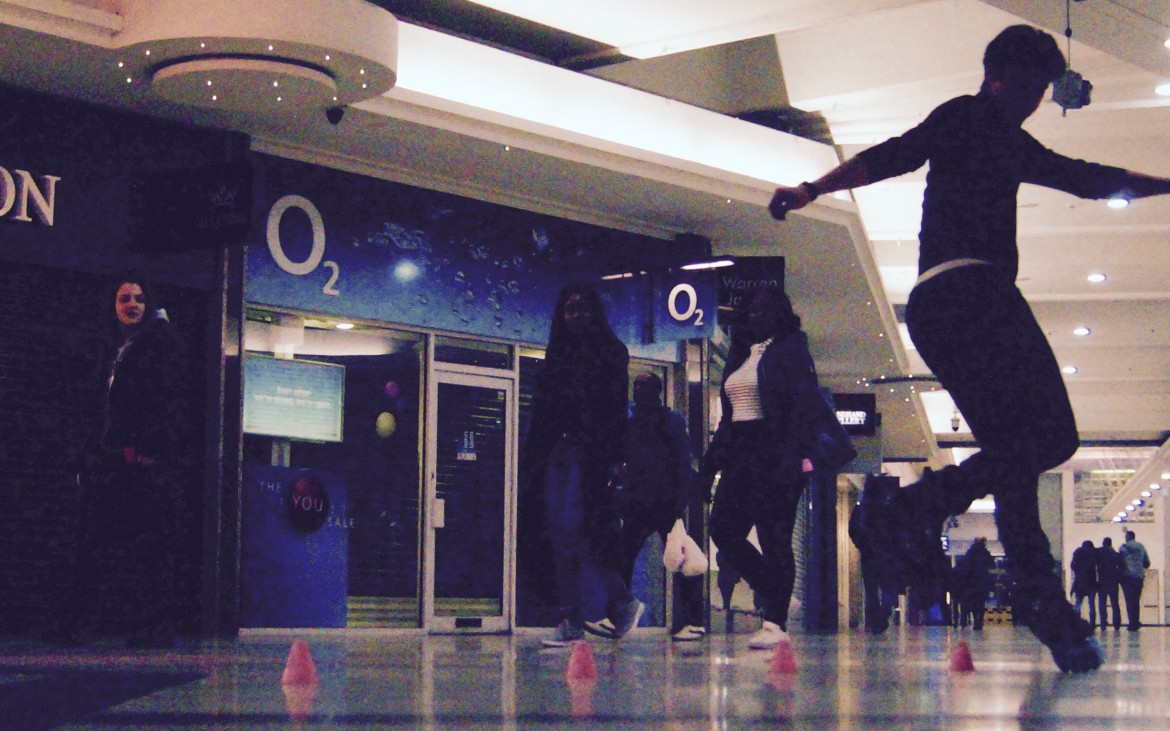 [pullquote align=”right”]“A lot of people just want to shake our hands and ask about what happens here.”[/pullquote]And nowhere is this contrast more visible than in Stratford.

Just two walls away from the utopian madness of Westfield – where most of us go to pay £8 for a burrito and charge our iPhones in those school-lockers-cum-charge-stations – a small community of skaters, breakdancers and freestyle bladers are gathering after-hours to showcase their passions and talents in an older, more harshly-lit shopping centre.

Historically, skating has always been something that has existed away from the mainstream.

Southbank has long battled to rid itself of any sign of subculture being created by the seminal skatepark that sits just by the river Thames, and it’s become almost an inside joke among the skateboarding community that they will eventually face hassle from both the law and the council for their passion.

Apart from Victoria Park, Bay Sixty Six and Southbank, which somehow still remains, major skateparks have been consistently scarce in the capital. So it’s hardly surprising that skaters would eventually just start their own in closed shopping centres. 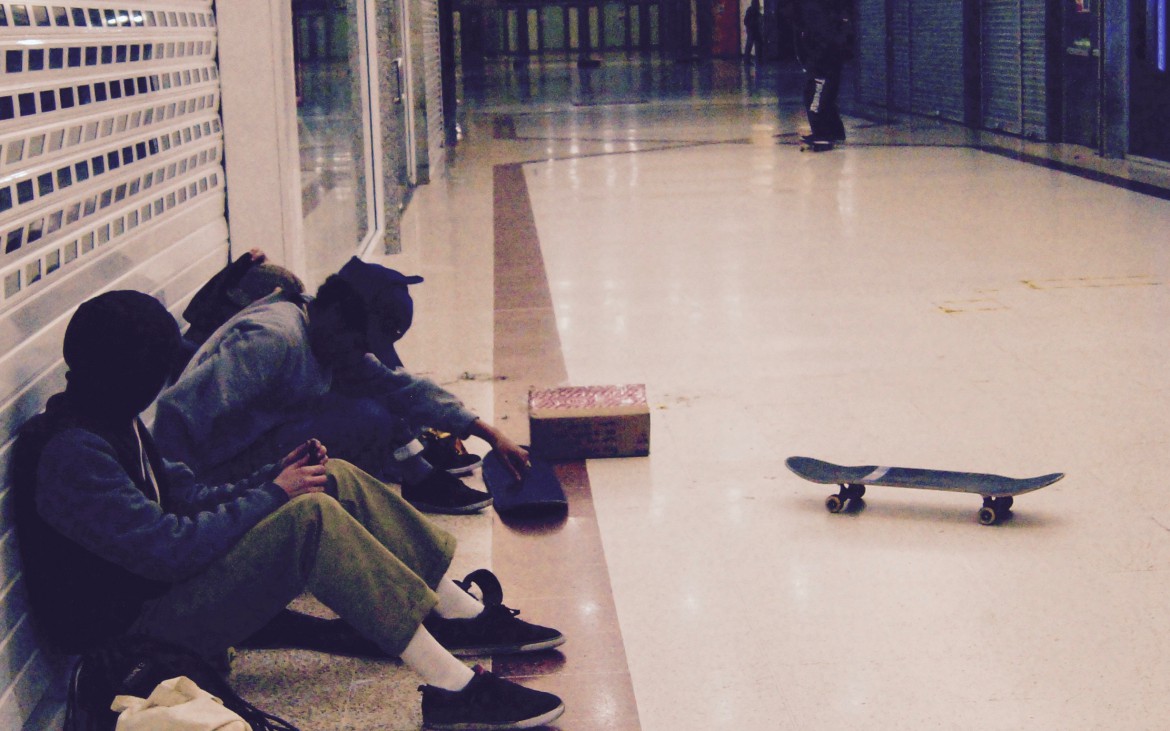 The Stratford Centre was built in the 1970’s, and sits awkwardly about 100 yards away from its newer, more significant shopping centre cousin.

According to the skaters themselves, it has been occupied at night by the community for more than ten years, after it started staying open to serve as a public walkway.

Natalie, from East London, who is one of the many people of different ages, genders and backgrounds who use the area, comes to Stratford for a place to hang out with her friends whilst practicing her biggest passion, freestyle skating.

“I’ve been coming here for roughly four years now, but the history of skating in Stratford goes way back. More than ten years, I’ve been told.” 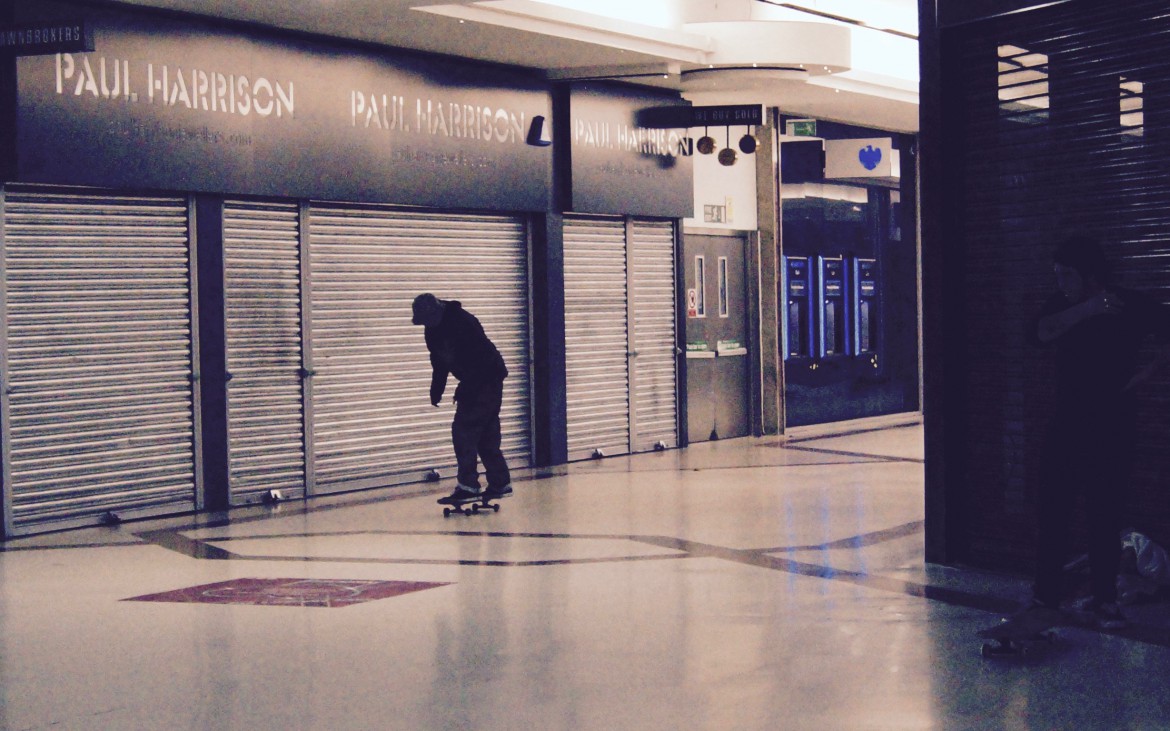 The first thing you notice when you walk through Stratford Centre after around 8pm is the amount of people who have stopped on their way through to just appreciate the things going on inside.

Some people film on their phones, while others simply stand and applaud from a distance some of the more impressive tricks the different communities manage to pull off.

The skaters certainly aren’t shy of the attention that inevitably comes with being in such a public area either.

“You get people stopping to watch or film us all the time, especially if they’re drunk,” one of the other skaters explains.

“It’s cool though because it is quite a unique thing, I guess. People just don’t expect to see it.” 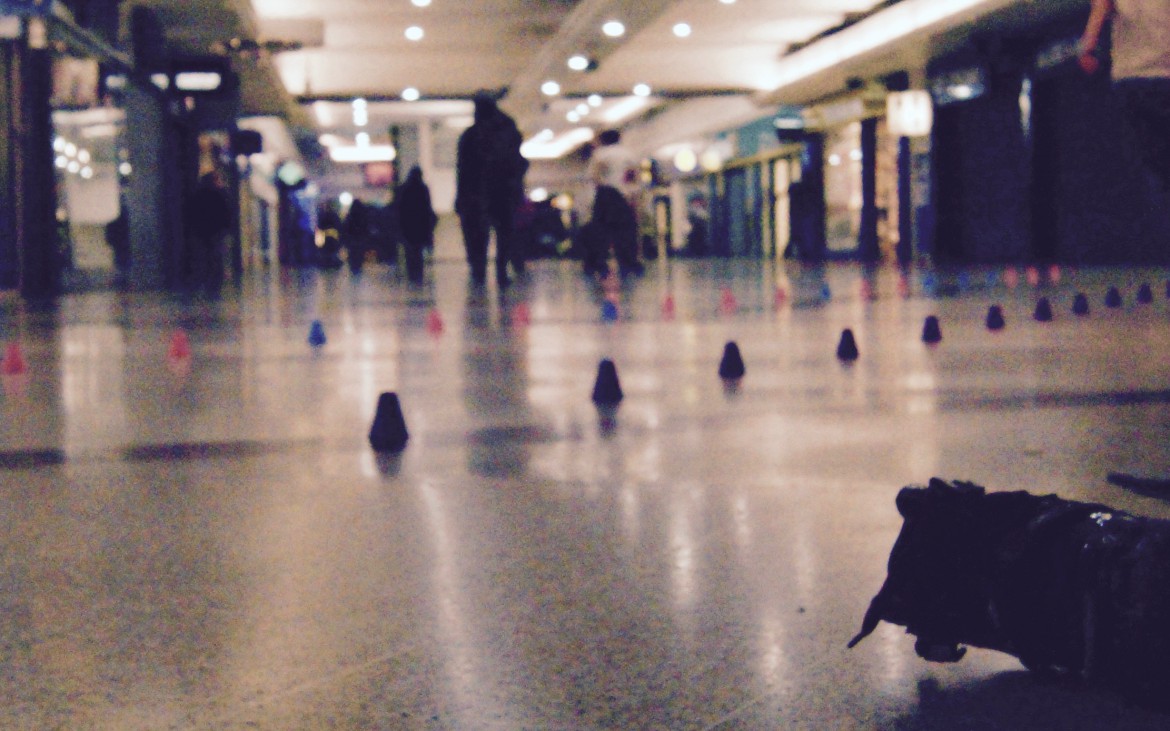 Being situated right in the heart of Stratford, between the main underground and bus station stations, means a huge amount of people pass through during the night, but it’s rare that the group face any real trouble or threat either.

“I think sometimes people may even feel a little bit intimidated by us, but again, that’s because it’s something you just don’t normally expect see happening in places like this,” says CJ, one of the main freestyle skaters who comes here almost every night to skate.

“Some people will just stand and watch for ages, like twenty minutes or something sometimes, and just watch us. There’s honestly never really been any trouble since I’ve been coming here.”

It’s clear that skating is something everyone who occupies the centre at night is extremely passionate about too, and without anywhere else to go during the evening in the area something like this was always going to happen.

Young people who are passionate always just seem to make the best of a situation, which is what the skaters of Stratford have done by turning the shopping centre into their nighttime hangout. 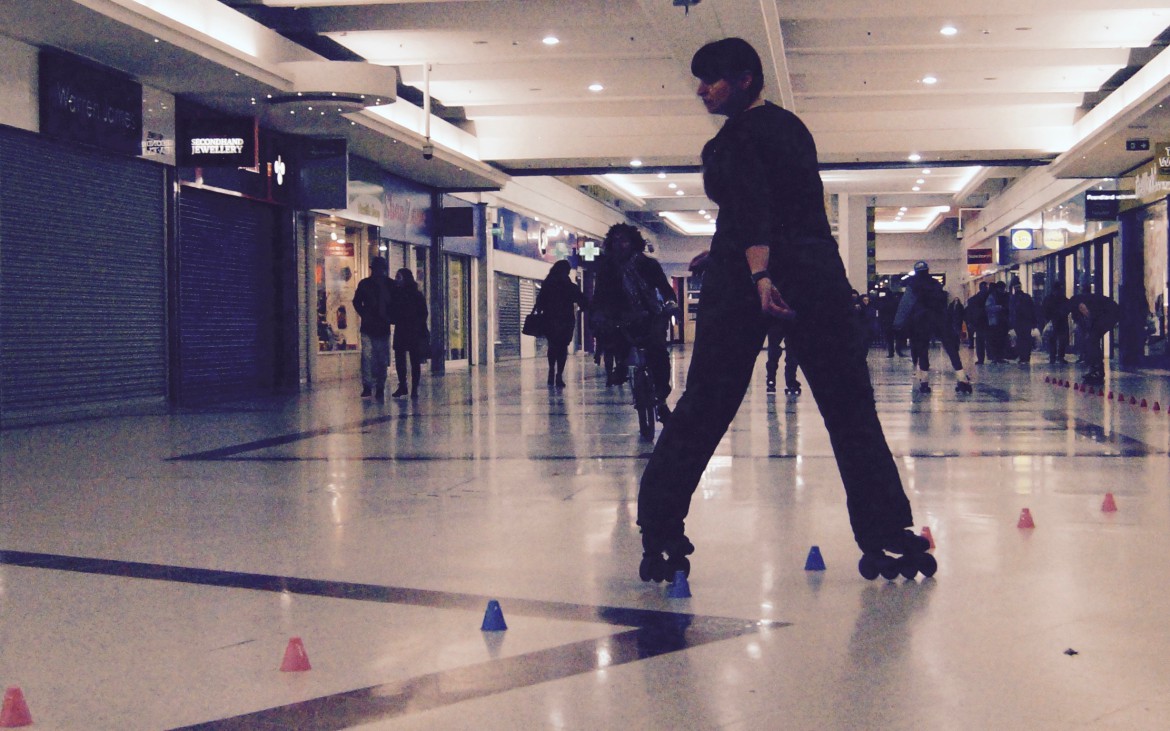 When the Olympics came to London four years ago, Stratford was promised huge changes to the facilities available to its hugely diverse, young population.

But aside from West Ham moving into the Olympic Stadium and the council almost making a slide out of the Olympic sculpture, those plans have practically been completely forgotten by Newham Council.

“I do wish that there was somewhere proper to skate, especially for the skateboarders.” one the of the other freestyle skaters explains.

“It’s obviously all just flat ground in here, which is really nice to skate on, but it would be cool if they built something with ramps and stuff so the we could practice more proper tricks.” 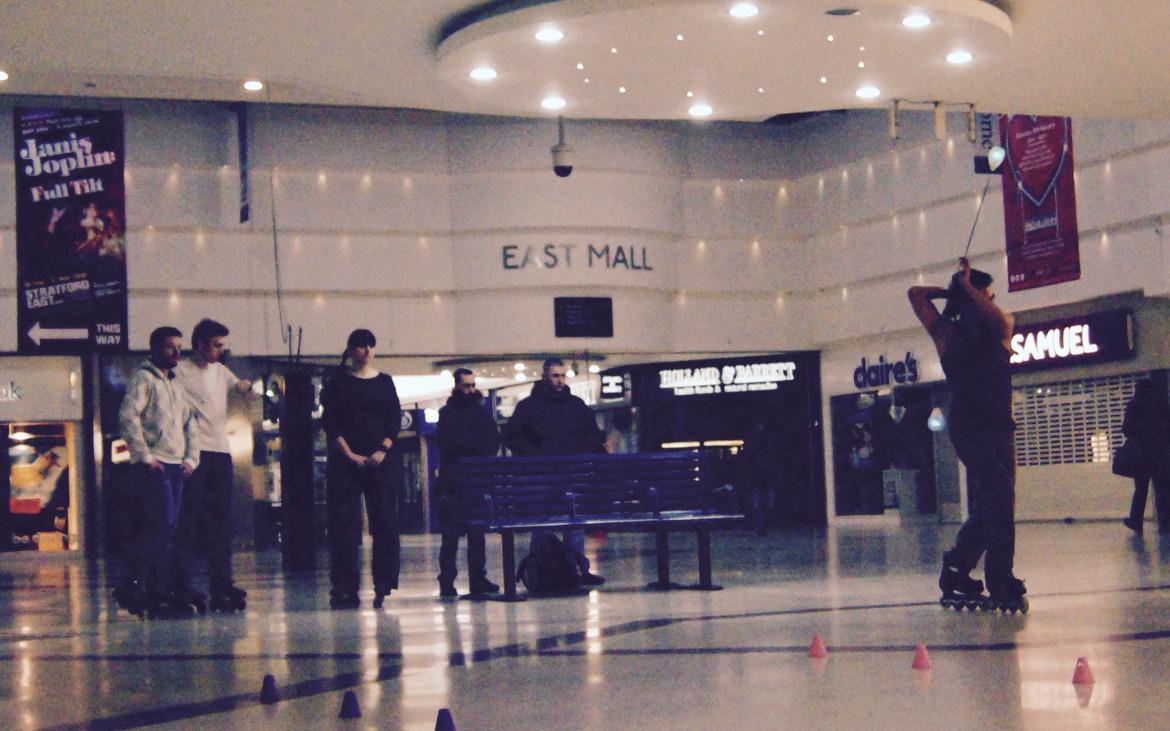 “There really isn’t anywhere else to go either,” CJ also says of the lack of facilities in the area, “so we do appreciate that we’re able to come here and not get hassled to move on.”

Security, for the most part, have left the skaters alone. Possibly because it keeps them out of the Westfield across the road. That doesn’t mean the night passes without a few security cautions blasting from the shopping centre speakers though.

“You’re on camera, we can see what you’re doing,” one message says around midnight. What exactly the message is alluding to, I’m not sure.

“To be fair they probably do hate us,” one of the skaters explains.

“There’s rarely any trouble though. The police do kinda patrol the place, especially on weekends, but they just sort of walk around a bit and leave us to do our thing.” 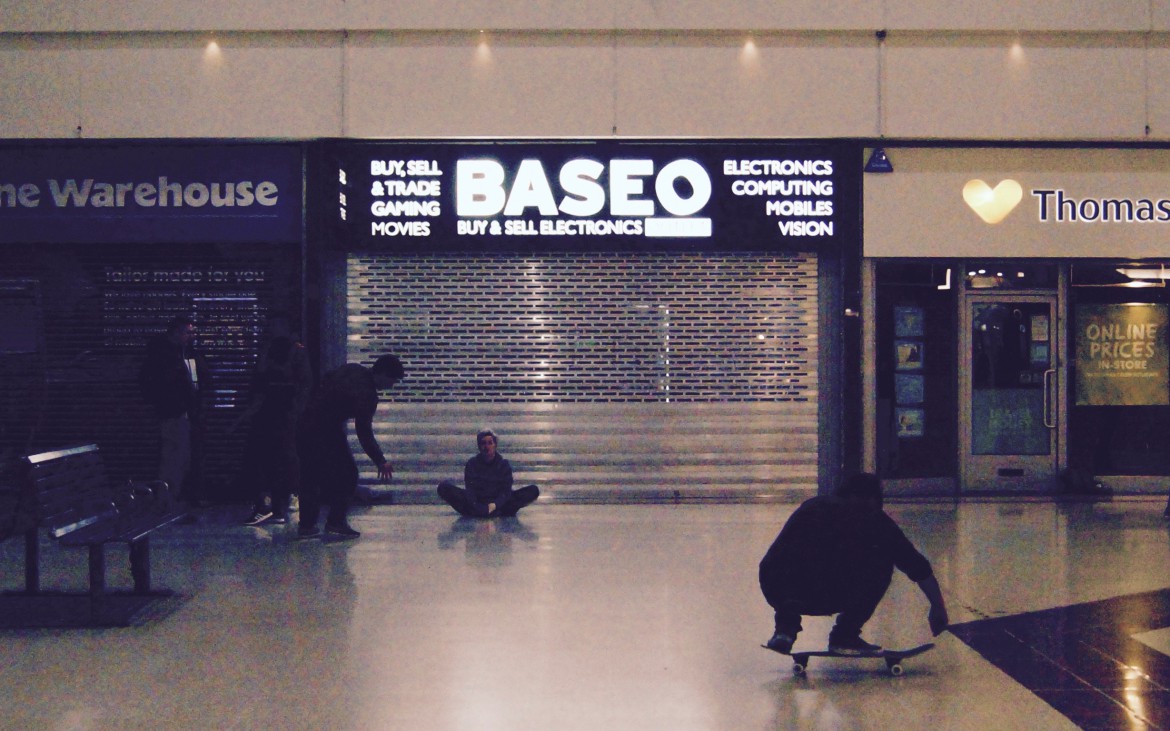 Nights at the centre can also act as a social gathering for the group. Many of whom are too young to go to the pub, and too passionate about skating to really want to spend their nights doing anything else.

Among the people who come here are the skaters, freestyle bladers, breakdancers, a few of their friends – some of whom have been playing hacks-sack for most of the night I’ve spent hanging out with the skaters.

A small community of homeless people also take refuge in the centre for a few hours each night, and considering the sometimes over-zealous approach of the security and police who patrol Westfield and the surrounding area, they must almost see the centre as the opportunity for a few precious hours away from the cold Stratford street and attention of the law. 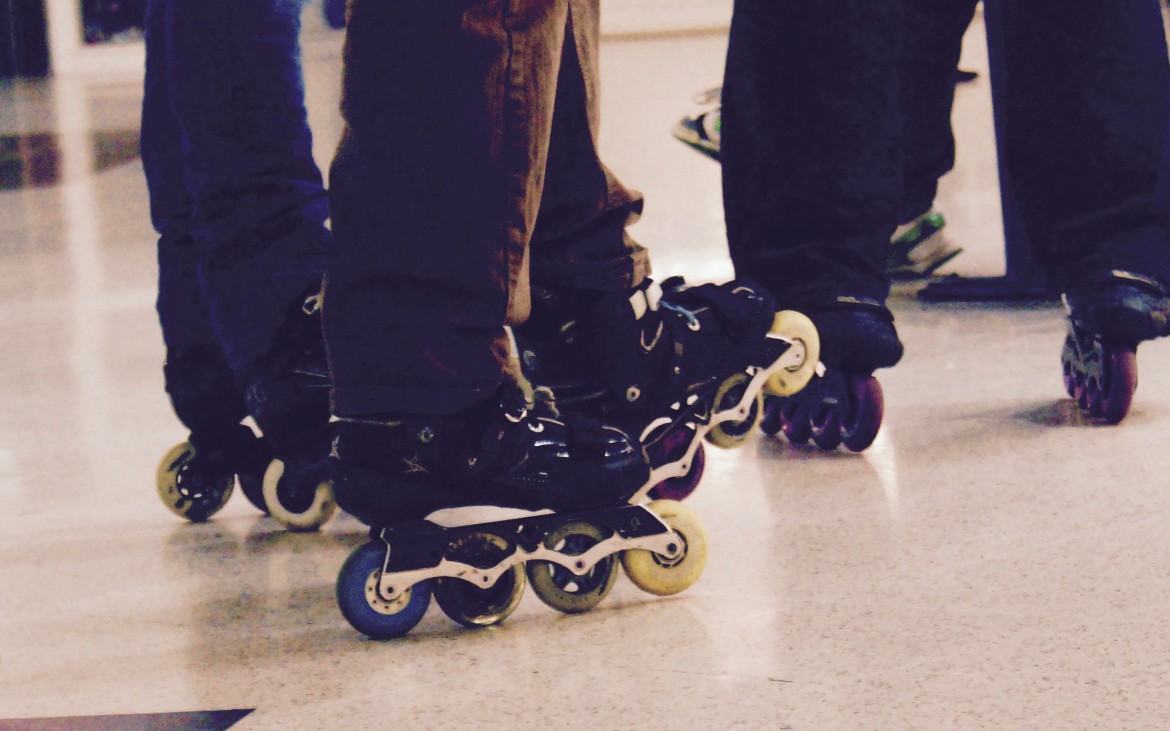 The atmosphere almost feels like that of an actual skate park during the daytime, or on a weekend.

Each of the different groups have there own space, sometimes all merging together to take interest in what the other is doing.

The backgrounds of everyone that comes here also varies drastically. Some are students, some are unemployed, and some are even teachers or work serving coffee or fitting shoes in the Westfield opposite during the daytime.

Some are just 15, while others are in their late thirties. What they all seem to share though is a huge passion for what they do, and the 24 hour opening of the Stratford Centre has allowed them somewhere consistent to gather and practice something that has become a huge part of their lives. 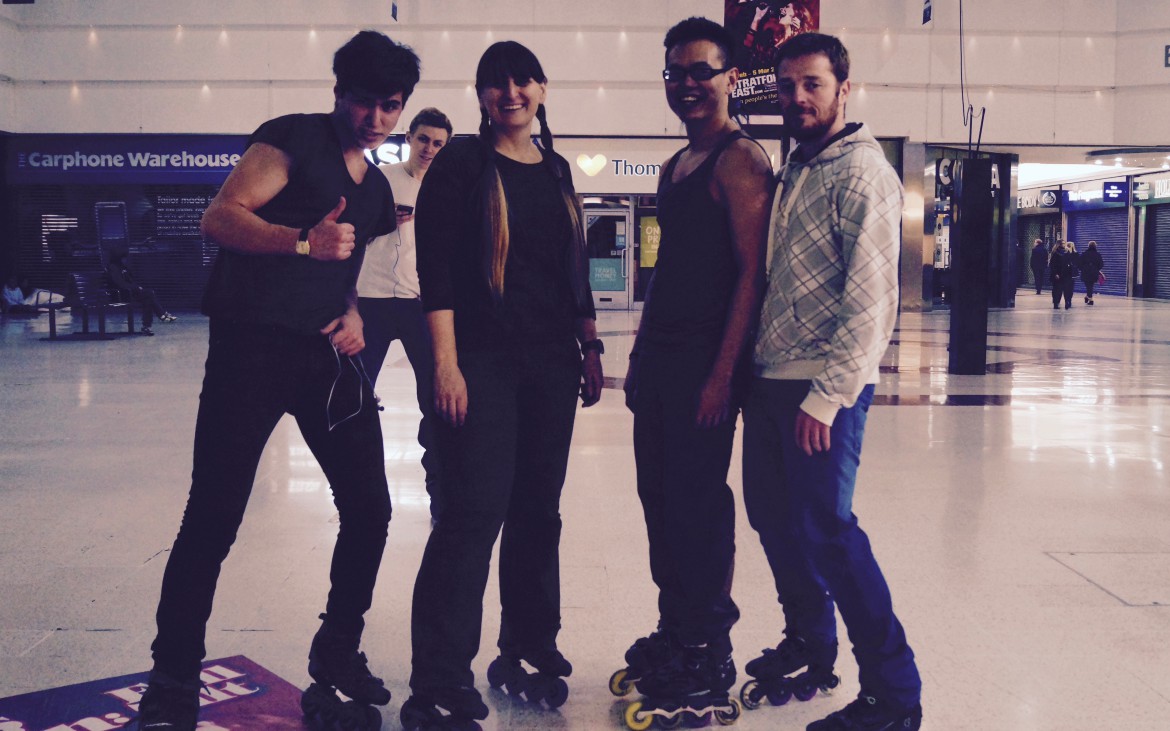 Too often, gentrification is a word used by people it doesn’t have a huge effect on. Almost as a symbol for a supposed moral value and regard for  the things that are happening around them, but that they don’t have too much involvement in.

A passing thought, or drunk conversation, that may lead to halfhearted debate, but never really leads to more than that.

What the skaters, b-boys, b-girls, freestyle bladers represent is a will to carry on against the grain of very real gentrification that is happening in their lives.

And they’ve done it in the graceful way of quietly continuing to create their own culture and community right in plain sight of a council that seems intent on placing their focus on pricing them, out in favour of those with more disposable incomes.

Whether it’s due to some kind of happy accident, or anarchistic occupation, however you look at it this is exactly the sort of thing that London was promised in the wake of the 2012 Olympics.

And barely half a mile away from the Olympic Stadium itself, subculture and young people finding solace in extreme sports and a community they’ve created for themselves continues to thrive against the odds. 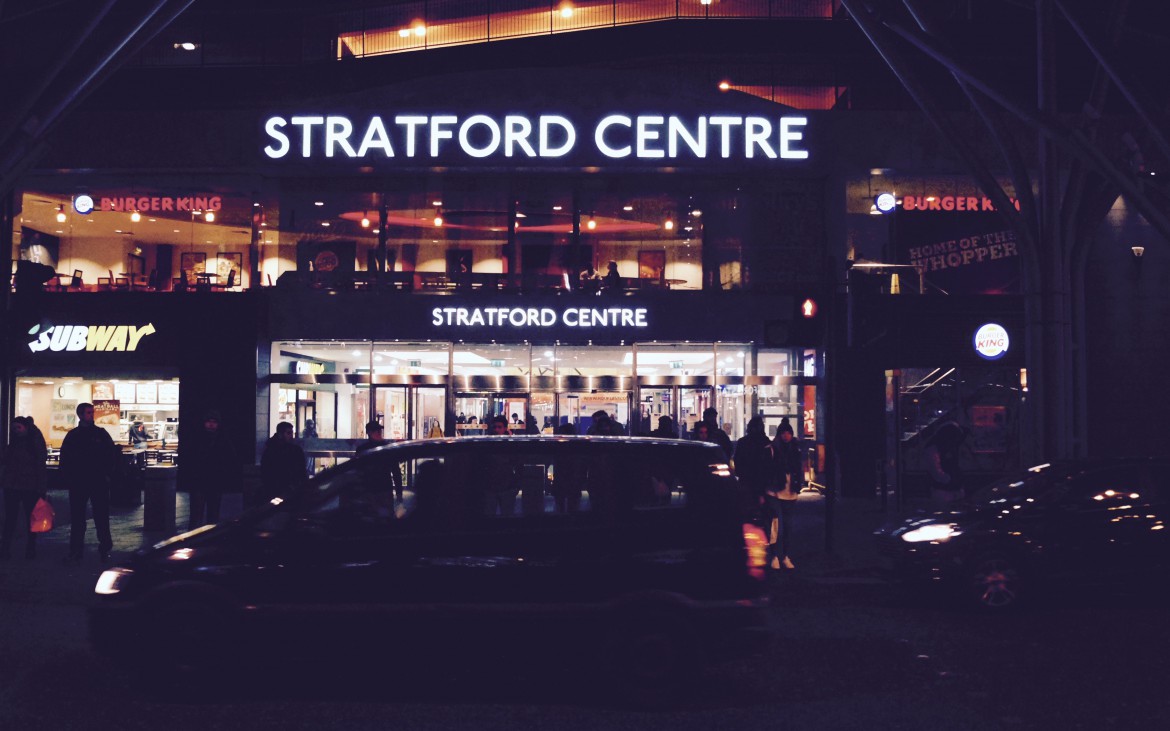 All images courtesy of the author.

By Aman Hafiz
3 Mins read
Brick lane is home to the most vibrant culture and atmosphere, but it is threatened by plans for a mall.
Culture

By Oriol Escude
6 Mins read
The unfinished Sagrada Familia has become known for tourism, crowds, kitsch souvenirs and paella restaurants. Its completion threatens the homes of hundreds of residents.