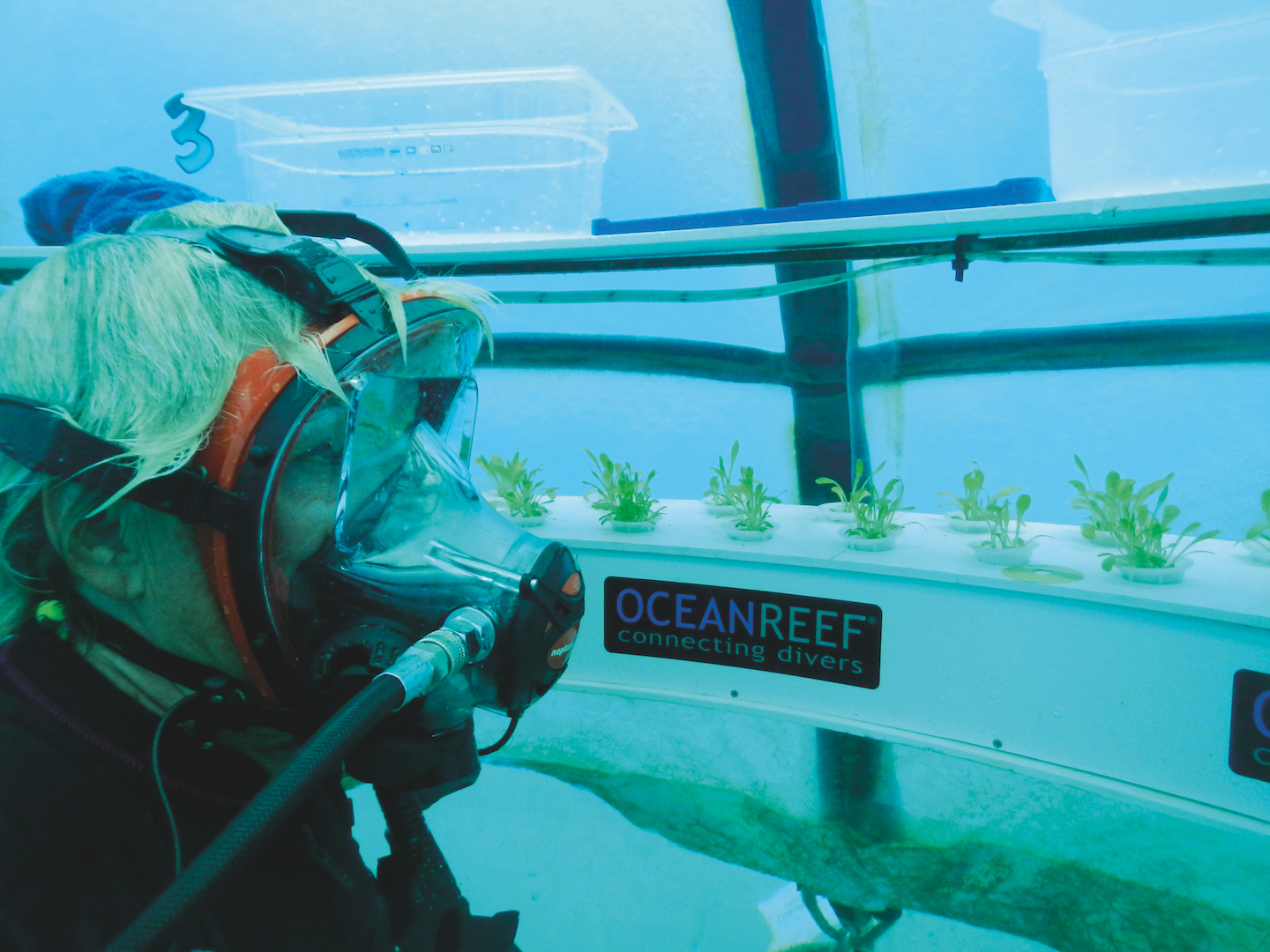 Under the crystalline waters somewhere off the coast of an Italian village, a group of scuba divers swim towards floating bubbles where they grow basil, beans, strawberries and lettuce.

This dreamlike image isn’t taken from a science-fiction novel, it’s part of the Nemo’s Garden project: an alternative farming method that could change agriculture forever.

The project, reminiscent of Jules Verne’s Twenty Thousand Leagues Under the Sea, is particularly relevant as in 2050 the world’s population is expected to reach more than nine billion.

According to the Food and Agriculture Organisation (FAO), our present farmland is the size of South America and to feed the coming three billion people we’ll need an extra landmass the size of Brazil.

This surreal, underwater project could present a very real solution to the food crisis as destructive, conventional farming techniques cannot be applied when farming beneath the sea.

The Nemo’s Garden project consists of a number of underwater greenhouses called biospheres, which are anchored to the seabed, where a wide range of products are grown.

The invention was first developed three years ago by an Italian family from the seaside village of Noli in the Northwest of ‘The Boot’.

The inspiration came from a father and son duo, brought together by their passion for the aquatic world and the gardening one. Sergio Gamberini, administrator of the Ocean Reef Group, a scuba diving company, his son Luca and few other divers were the founding members.

After talking to Luca Gamberini, it seems that this project is aiming for food production on a large scale: “Our dream is to build bigger biospheres in lagoons, lakes and potentially in the ocean in order to compensate the lack of cropland.

“The first goal is to place biospheres from May to October by the cost of Noli and at the same time to expand our experimentation to Australia, Maldives, the Baltic Sea and to the US.”

Despite still growing and learning, the Nemo’s Garden project has already gained a lot of recognition. In the Expo 2015 (Milan World’s Fair) the idea was chosen to represent the Italian region of Liguria.

The invention has also received international media attention, including articles in the Washington Post and the Guardian. 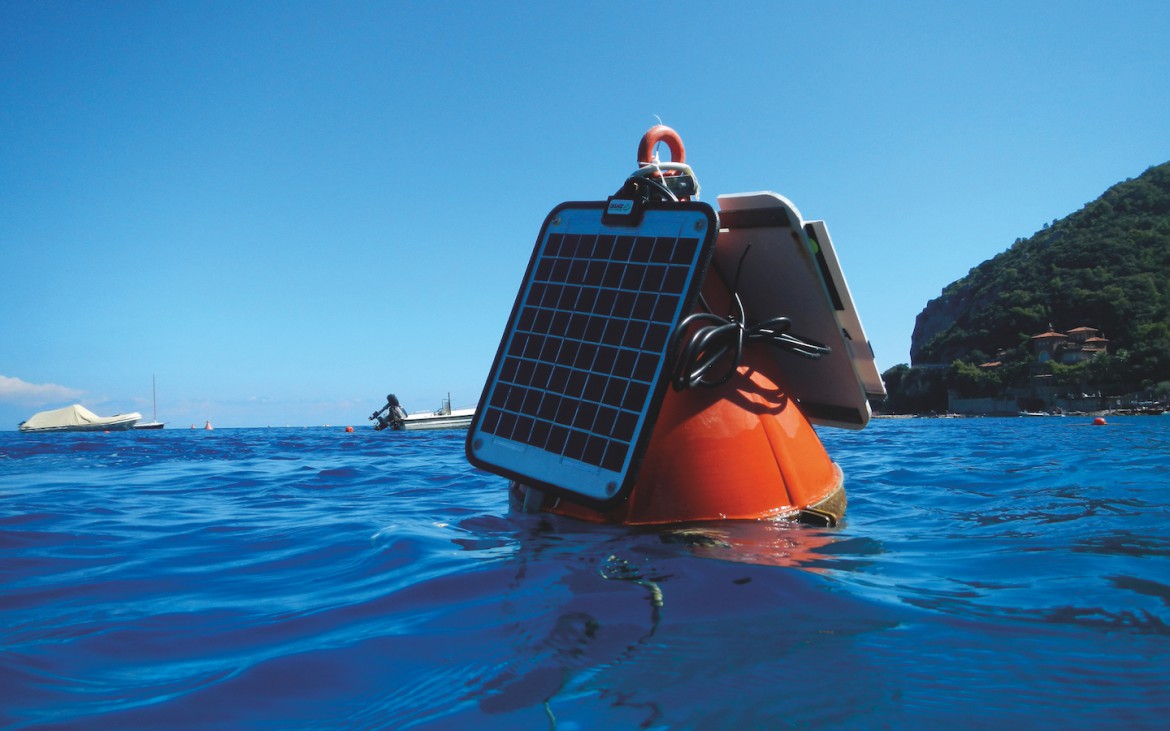 While underwater farming sounds like an innovative idea, it’s also a very complicated one to achieve.

So how does this invention work? The underwater pods called biospheres, similar to hot-air balloons, are pegged to the seabed with eight screws and supported by a structure where the gardening equipment is built. The bottom side of the biosphere is open in order to allow one or two sub farmers at a time to directly access them.

Nemo’s Garden Project is a step away from destructive farming techniques. First off it’s an eco-friendly form of farming, the farming processes used in the biosphere don’t create pollution, nor does it affect the surrounding seawater.

The underwater farm has very little, if any interaction with the marine environment and existing ecosystems. The only exception to this is the positive shelter effect from the biospheres.

Nemo’s Garden is also self-sufficient, it uses renewable energy and once the crop has been planted by using fresh water obtained by desalination of seawater, it continues to sustain itself without any external support, except the light and the heat transmitted by the seawater.

At the moment, the underwater farm that consists of seven biospheres of varied size, is located in Noli’s Bay and covers a surface of 15 square metres.

The farm is composed of a big biosphere called the underwater lab that has a volume of 2,000 litres, four smaller biospheres the size of 800 litres and two cylindrical biospheres of 200 litres.

The biospheres float at different depths in the sea, from five to ten metres below the surface, and they are made of a transparent polymeric film that allows the sunlight to reach the plants.

The biospheres are filled with air and thanks to the stable temperature of the water they stay at 26-27ºC – the mild temperature allows the biospheres to grow plants with the same characteristics and properties as the ones above ground.

The Centro di Sperimentazione e Assistenza Agricola of Albenga, an agriculture test centre said that some of the products grow even quicker inside the biospheres than on land.

The biospheres are completely sustainable, they avoid the waste of natural resources and the use of pesticide. The difference in temperature between the inside of the biospheres and the seawater surrounding the bubbles make the water inside evaporate, creating an high-humidity environment.

The humidity keeps the plants hydrated by drips of water condensing on the inner walls of the biospheres. The sea also acts as protection from insects so the use of pesticide isn’t necessary.

Four cameras filming Nemo’s Garden 24/7, give an overview of the entire underwater habitat. In this way it’s possible to follow constantly what happens in the underwater farm. 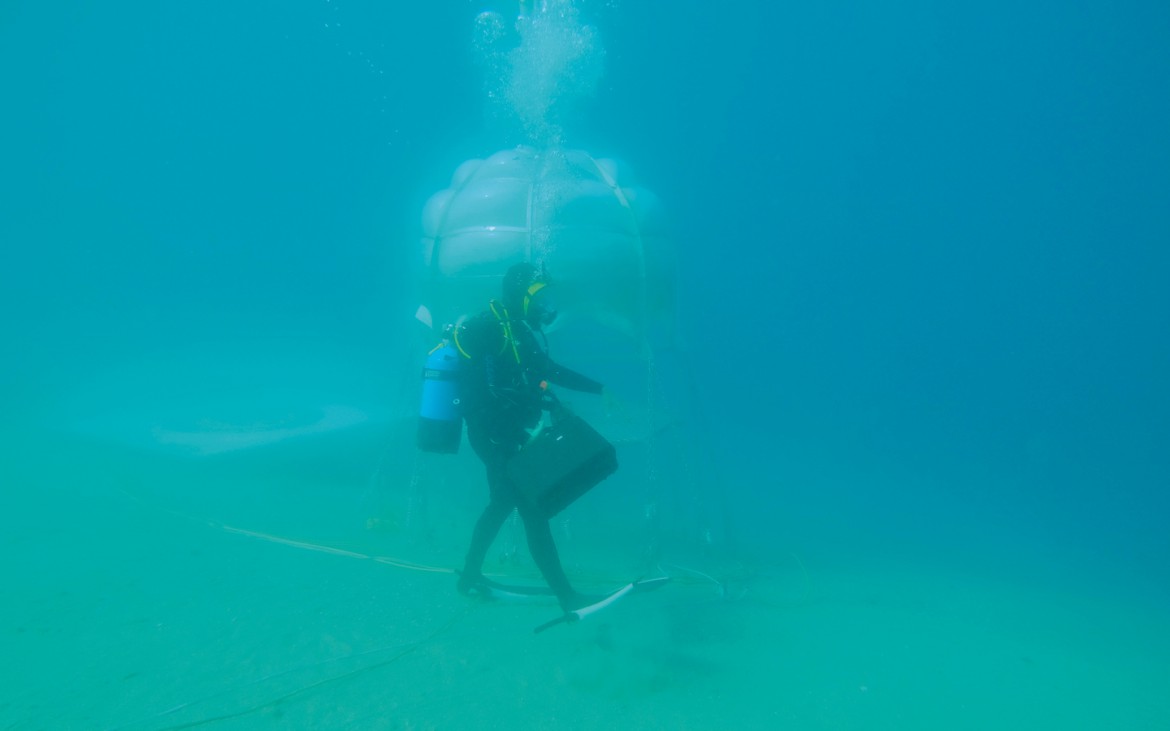 A surface support station on dry land, named the Control Tower, allows the scientists to monitor the status of crops without having to dive down every day to tend to them.

It also allows them to communicate live with the agrinauts (via ultrasonic underwater communication systems and through an intercom in the biosphere lab) and whoever is diving in the underwater farm.

There are also remote systems in the tower where they can monitor both the crops status and the physical and en- vironmental parameters recorded in the biosphere lab.

This form of farming is completely new and still going through experimentation. Ocean Reef want to explore if the installation of the biospheres could be used for other purposes while cultivating plants: for example, conservation.

Examples would be fishing farming, growing types of seaweed or coral to repopulate dying or diminishing species.

The biospheres could also be tested as fish shelters and a way for monitoring wildlife. Animals such as seahorses, a rare find in the Mediterranean, have started to inhabit the site of the biospheres.

The biggest challenge for Ocean Reef is to get funds to conduct further experiments on a larger scale. However, thanks to the recognition the Ocean Reef team have received so far on Nemo’s Garden, they have been able to improve the engineering aspect of the biospheres and grow 25 new products.

To gain financial support and further recognition, the group also presented a funding project on Kickstarter.

Even though other underwater farms of biospheres are not available on a large scale yet, it’s possible to imagine what could happen in the future of our own home.

The ‘Mini Nemo’s Garden’ is a small version of the project, built inside an aquarium – a scaled down, 100 per cent functional version of the bio- sphere installations and will be available to gardening enthusiasts to buy to experiment with alternate forms of gardening in the home.

This is an original way not only to grow products at home but also to contribute to the green economy.

The rise of robotic dairy farming