Exhibition | Rockarchive’s A Chunk of Punk

UAL alumni and Rockarchive founder Jill Furmanovsky is renowned for photographing some of the biggest names in rock music, including Pink Floyd, Bob Dylan, Bob Marley and The Clash.

Her work during the rise of punk in the 1970s is considered some of the most seminal photography of the era, beautifully capturing a scene that was vibrant, rebellious and had the same DIY ethic of a young Fumanovsky, who had emigrated to London from Zimbabwe with her parents just ten years previously.

Rockarchive’s A Chunk of Punk opened at the Barbican in early March to showcase her mainly unseen collection of images taken at the height of punk: featuring The Buzzcocks, The Jam, The Sex Pistols, The Clash and the many other bands who convulsed the UK music scene back in the 1970s. 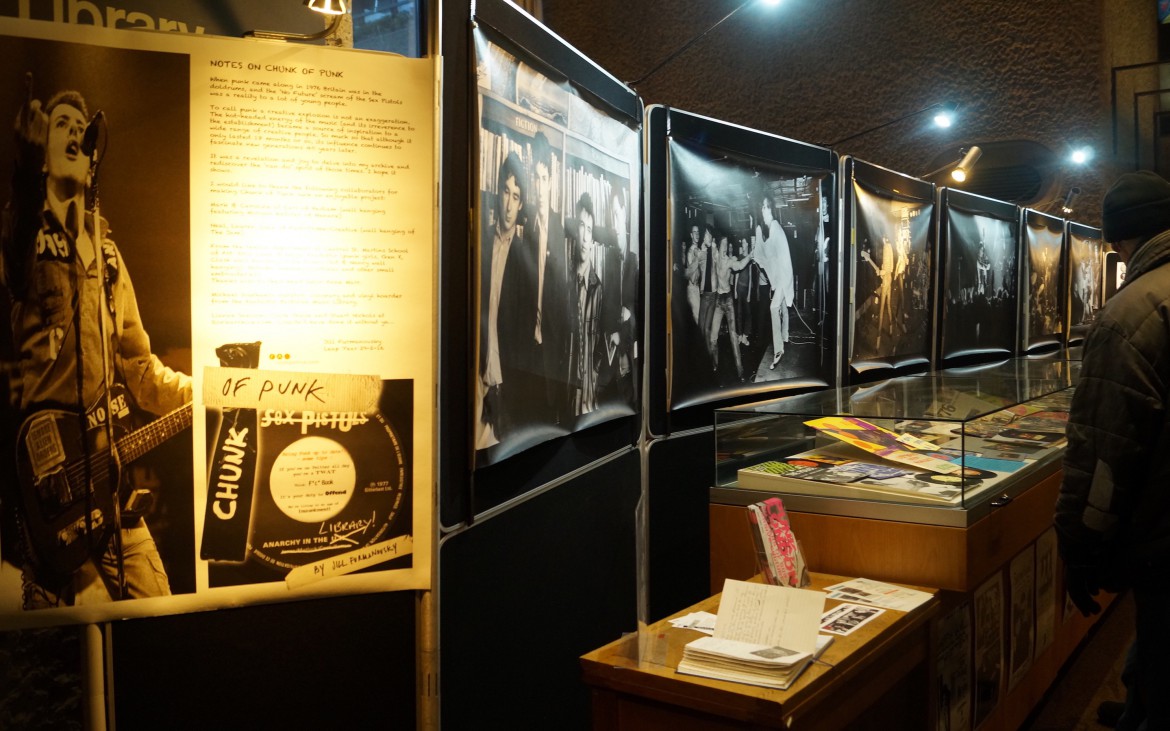 One of the displays showcasing Furmanovsky’s images of Joe Strummer among others.

The Barbican serves as a perfectly fitting venue for such a celebration of important, delightful photography, with its delicate, calming interior antagonising the bright, safety pin clad exhibition sitting unmistakably at the back of the library.

The live images are particularly impressive, and seem even more striking and relevant now than they did when they were taken 40 years ago: each one complimented by article cut-outs, rare LPs, and short anecdotes written by bands, friends and Furmanovsky herself: including one about the strange inspiration behind Gary Gilmore’s Eyes by The Adverts. 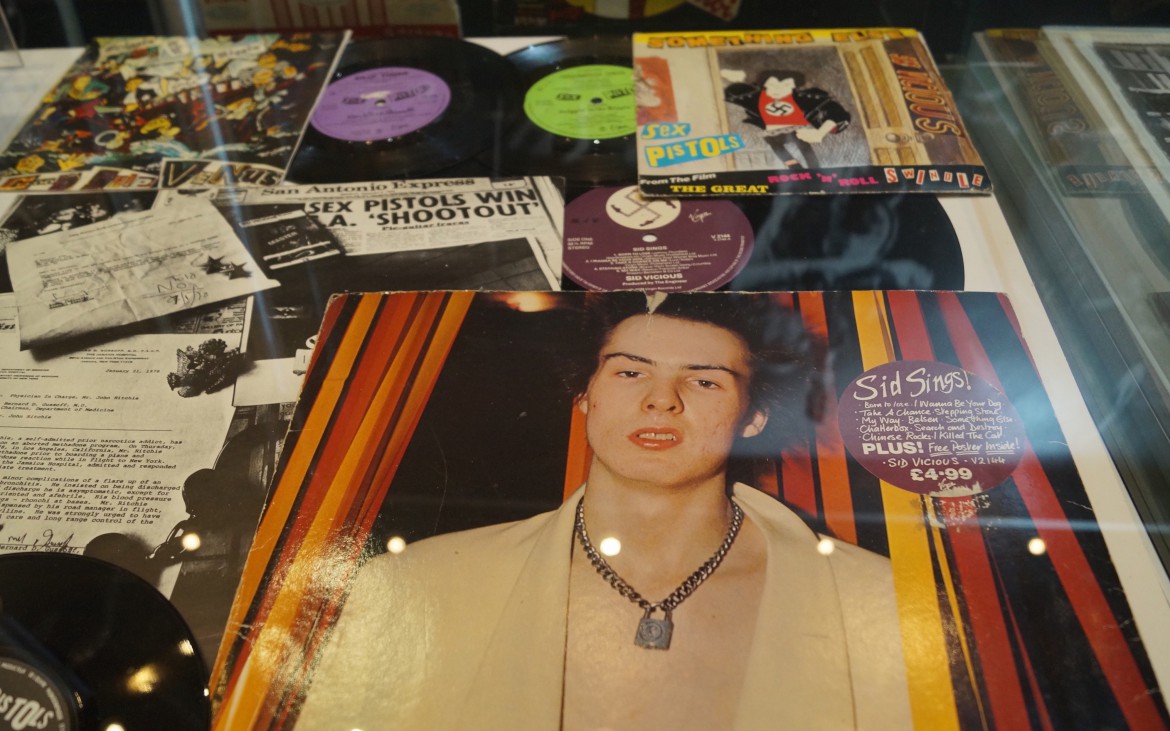 The opening of the exhibit kicked off with a Q & A featuring Jill Furmanovski and Mark Berry, creator of punk rock zine Sniffing’ Glue which began in 1976 featuring contributions from none other than Shane McGowan, offering a unique opportunity to meet two influential people central to the rise of punk rock.

The exhibition also features super rare editions of the Sniffin’ Glue ‘zine that could be privately viewed during the opening, with some still on display and available to read throughout its run: with the first edition featuring two extremely early interviews with both The Clash and Sex Pistols.

Fermanovski would later stretch out into film, with her latest work including music videos for both Oasis and the Pretenders. She’d also produce “Oasis – Was There Then“, a groundbreaking exhibition and book of the same name focussing on the former, that toured both England and Ireland.

Her work showcased in “Chunk of Punk” offers an exclusive, intimate portrait of some of her earliest photography of a subversive culture, captured with a raw elegance that fails to exist in much of the other photographic work of the era. 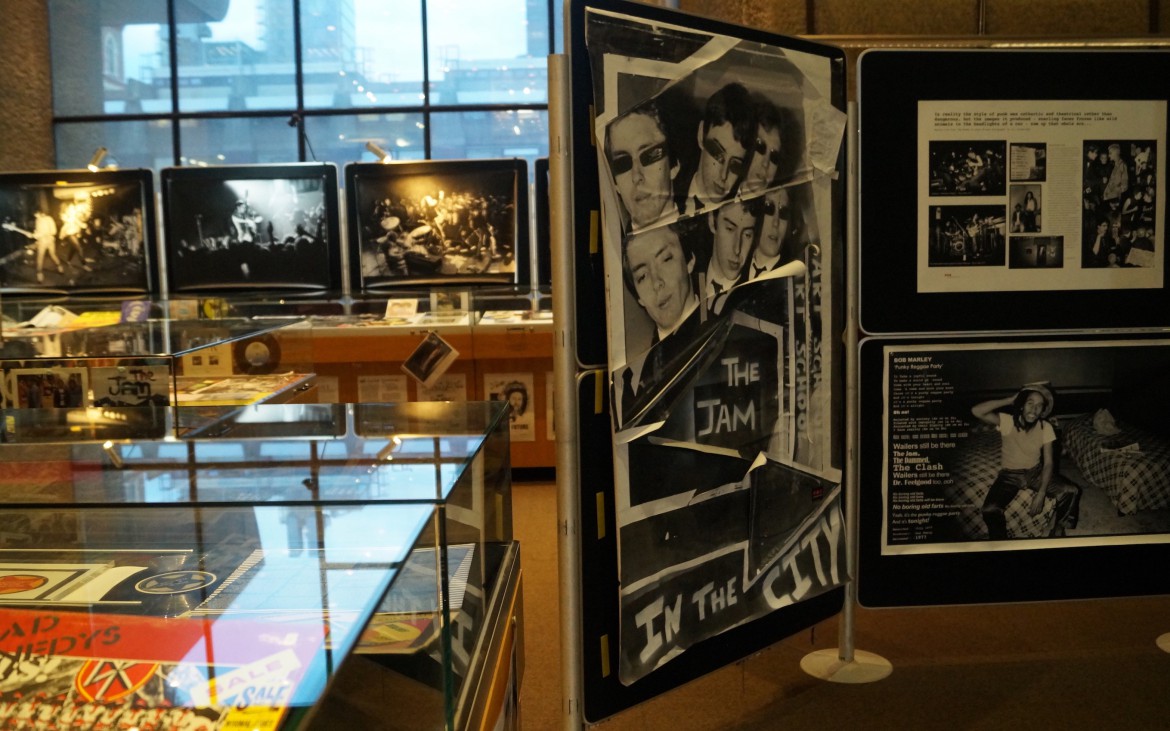 Central to the exhibition is a montage of Furmanovsky’s work annotated with anecdotes and details of the era.

Each image is unique and distinguishable, showcasing the incredible eye for detail that Furmanovsky possessed, even in her earliest work.

Situated next to the library’s rare collections of musical film and records, an interactive music booth is also available to listen to albums of the era: including The Clash, Siouxsie and the Banshees and The Sex Pistols which is a fitting, unique touch.

Her portraits manage a rare intimacy into figures such as Sid Vicious and Nancy Spungen, and her live images delve into the energy and emotion of the early punk scene, with many of them offering a a fascinating and exceptional reflection of the timeless, “you needed to be there” moments of punk history.

Fermanovski has recently managed to unite Liam and Noel Gallagher for a full length documentary focussing on Oasis, and her archive at ‘Chunk of Punk’ is a must see for anyone with an interest in music, photography, fashion or subversive culture.

All images courtesy of the author