From club to concert hall 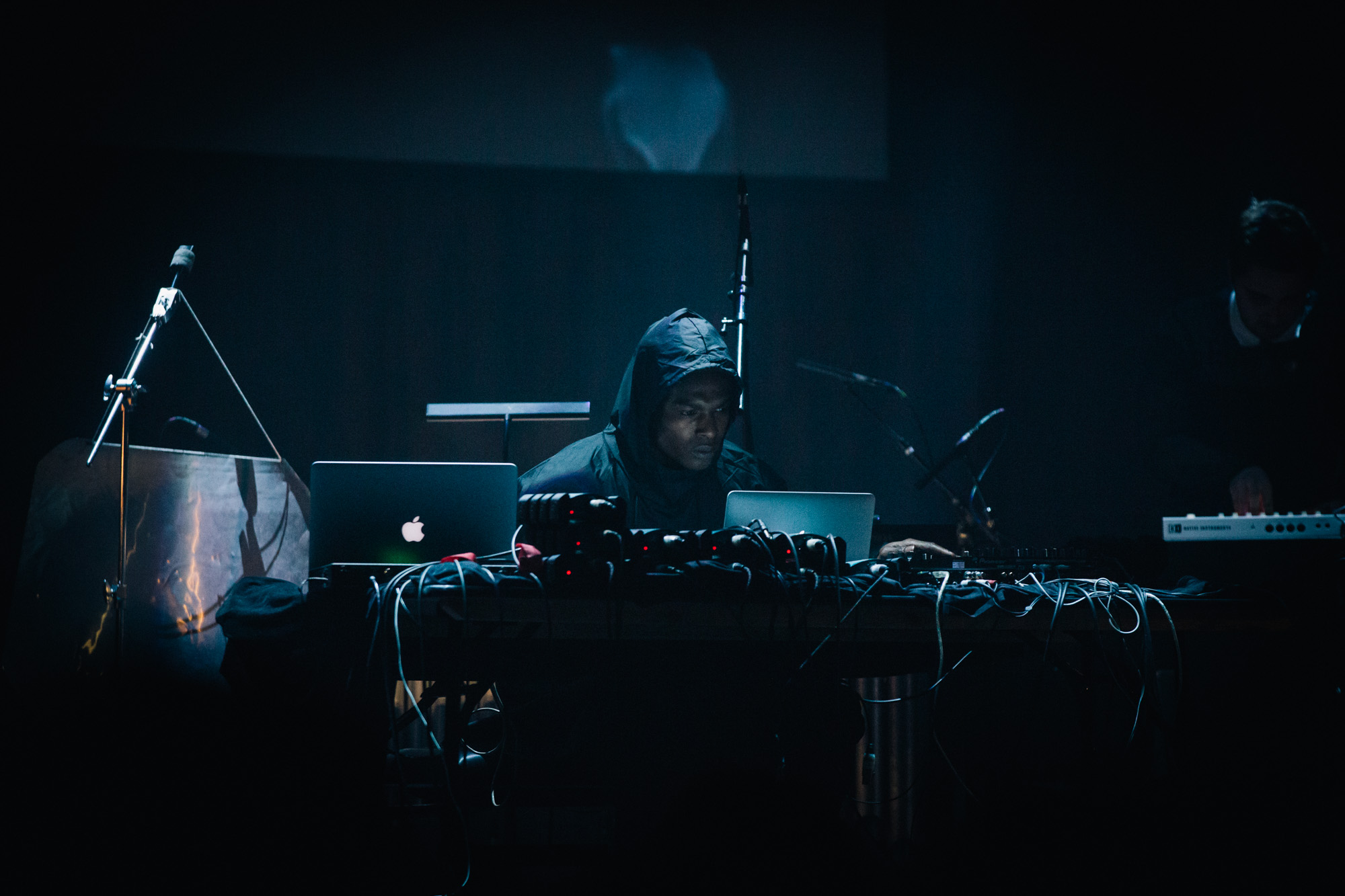 “Good evening and welcome to the blue potential, It was made about 10 years ago, the track is about injustice, it’s about one part of society prohibiting and keeping down another part, and sometimes the way to change things is to come together and make one voice – sometimes that voice has to stand up to what they believe in” – Jeff Mills, 2005

If you think about classical music, you’ll no doubt make certain assumptions about its age and heritage alongside the calming melodies and piano keys.

Reflecting on techno may be a different story; sending you back to a bug-eyed sweaty club.

Despite the significant differences in atmosphere, the 21st century has seen the two genres colliding together, creating new and unexpected sonic collaborations.

The recent performance by Darren Cunningham aka Actress and The Contemporary Orchestra had anticipations running high.

Commissioned by the Boiler Room website and supported by the Ninja Tune record label, the event at The Barbican brought swarms of fans intrigued to hear how the mixture of the two sounds would work. They spent the evening entranced by the minimalistic orchestral arrangements.

The event was funded by the Arts Council England, and Joyce Wilson, the London area director commented: “This project combines two very different forms of practice and communities of music lovers…

“This live and experimental collaboration will help cement Boiler Room’s place as a leading forum for new music and enhance the range of content on offer to its online audience across England.”

The night revolved around avoiding the beats and making way for the lighter, subtler sounds. For some, the patient approach to Actress’s usual techno busting crunchers was  encapsulating although the concept may have lead your mind to stray. At points some songs are un-recognisable without the bass format.

Cunningham finally achieved his longing to make “classical stuff for the modern generation” describing the night as “a heightened kind of chamber music”.

The new age sees many classical collaborations from a range of artists, Aphex Twin & Philip Glass and Brian Eno’s classic explorations are just a few.

Giving away to globalisation, for a contrasting integration is paving the way for the future of music and what is perceived not to be possible.

From one polar opposite to the next, Techno encompasses repetitiveness, a long-running history of its mould in urban tribalism, or in a sense, escapism and connection. The minimalist theme runs strong here, a term coined by Michael Nyman, a classical pianist and critic in 1968. Being described as “a whole new kind of language,” specifying on its ability to grow, minimalism has certainly done that.

An ability to encapsulate a genre revolving around a theme leading into alternate realms of instruments and technology and encompassing a new generation of listeners.

As a purveyor of everything Detroit, Jeff Mills has been musically merging classical aspects with electronic sounds for over a decade.

As a prominent icon of the scene, founding his label Axis Records, co-founding Underground Resistance and leading the scene with champion mixes. As techno grew, so did Mill’s ambitions, delving deeper into the unknown and unconquered.

The fresh classical take on minimalist techno saw an overwhelming amount of interest from European countries but a dip in American interest.

Mills had a vision of his music, a vision where the royal dense sounds of techno translated too classical instruments via The Montpelier Philharmonic Orchestra – churning out live shows across Europe brought this fresh sounds .

Out of the techno trio Belle-ville Three, consisting of  Derrick Carter, Juan Atkins & Kevin Saunderson, it was Carter who debuted seminal anthem Strings Of Life in 1988 with Detroit Symphony Orchestra in a homecoming performance joined by Mills.

Demonstrating the sheer ability Carter’s songs have when accompanied by a live orchestras. Entrancing brass and string sections mold along the hypnotic techno beat.

“These visions aren’t supposed to come from black guys in Detroit,” said Mills in an interview last year with The Guardian.

As the orchestral combination goes , this question leads me to ponder who’s supposed to instigate the genre cross-over, the white male who founded a classical uproar or your local music savvy dreamer.

A matter of importance dawns upon those so fond of classical music, and those who play and write it; often remaining with a consistent crowd of your standard classical music fan.

The techno uprising has brought a new lease of life to a genre regarded by some dated and others ‘boring.’ Shifting the course of genre’s can result in many failed attempts, but with a concept as bold and genre-spanning as minimalism the two can entwine to draw out a new generation keen to appreciate and understand.

Across the pond, German born Henrik Schwarz, veteran of the deep house scene who constantly pushes the boundaries with his music has sought out to join the moulding mindsets of fellow musicians.

Trading his synths for secret orchestras, Schwarz spent four years developing and creating the sounds he sought to share via Sony classical label. Claiming that it begun after asking the question “What’s left of my music if I have it played by Classical musicians and omit the most important element, the beats?”.

The challenge, that seems to draw attention to those in the realm of dance music formulates eradicating the sense of “electronica” to replace the beats with strings and brass.

Likening to the inspiration and sound omitted by Actress at the recent Barbican event – By removing the shattering bass which often dominates songs, it makes space for the subtle intricacies aligned by the artist which truly ignites the sense of bold artistry.

Whether it works or it doesn’t, whether you like it or you don’t, this musical uprising is diminishing any genre constraints you thought might have been associated with techno or classical music.

Such a refreshing take on music can make anyone see that the impossible is possible. The visionary attitudes reflected from figureheads of dance genre’s only prove there is always leeway for those creative and ambitious enough to try something different.