In November 2015 Theresa May, the Home Secretary, released the draft of a new surveillance bill called the Investigatory Powers Bill (IPB), the so-called “Snooper’s Charter”.

In the run-up to its publication, Government officials, like May, stressed that the Bill was introduced as a thorough precautionary measure to prevent terror-related offences and other serious crimes.

The IPB introduces more powers to security organisations such as the interception of phone calls and monitoring internet searches.

May has recently come under attack from senior members of Parliament because of the draft IPB; many of them argue that the IPB intentions are not clear.

As an introductory statement May states: “The use of investigatory powers is vital to locate missing people, to place a suspect at the scene of a crime or to identify who was in contact with whom.

Privacy International (PI) said in a statement: “Hacking involves an active interference with a computer, it raises serious evidentiary concerns. Evidence obtained via equipment interference is admissible in court.

“Once an agent or officer takes control of a computer by hacking it, however, they have the unfettered ability to alter or delete any information on that device. This raises the risk, in the context of a criminal prosecution, of defence accusations of evidence tampering”.

The report states that it will introduce a more transparent regulation compared to the current security laws, while May states that the reassuring environment will still exist, as the chosen interceptions will only be authorised by herself and in the case of Scotland, a Scottish minister will take charge.

The Joint Select Committee (JSC), consisting of 148 MPs, released a report citing concerns about the IPB as the Bill makes its way through parliament. During the public panel the committee also heard from 59 members of the public­.

MP Joanna Cherry told the Huffington Post “Everyone wants to get the balance right between protecting civil liberties, in particular, the right to privacy and data security and giving law enforcement and the intelligence and security services the necessary and proportionate powers to fight serious crime and terrorism, however the Government’s attempt to get this right falls short.”

Wendy Grossman, a freelance technology journalist told the committee: “The bill proposes to allow interference with “electronic devices such as computers and smart phones.

“The image this phrasing creates is that of either a self-contained device that is used by one or a few individuals for long-established purposes such as email, word processing, internet browsing, and so on, or perhaps the routers, switches, and other devices that direct data traffic around the internet.

“This is not the reality of computers today, let alone tomorrow. Modern cars are clusters of computers on wheels—ten to 30 for an ordinary car, as many as 70 for a luxury car. The same or similar is true of other vehicles from tractors to airplanes. Computers are embedded in streetlights in Glasgow”.

The Joint Select Committee did stress that they did believe in law enforcement interception – especially to save lives.

Internet connection records were also a subject of scrutiny. The IPB states that the government will monitor communications made by computers to each other.

If evidence of criminal activity was found the government would locate the wanted individuals through their IP address.

Former liberal democrat leader Nick Clegg argued that the bill was undemocratic: “The question is about proportionality. Is it proportionate in a small ‘l’ liberal, small ‘d’ democracy to retain information on everything – from the music you download on Spotify, to the app you opened, to the supermarket website that you visit – in order to go after the bad guys? Very few other countries other than Russia take this dragnet approach.” 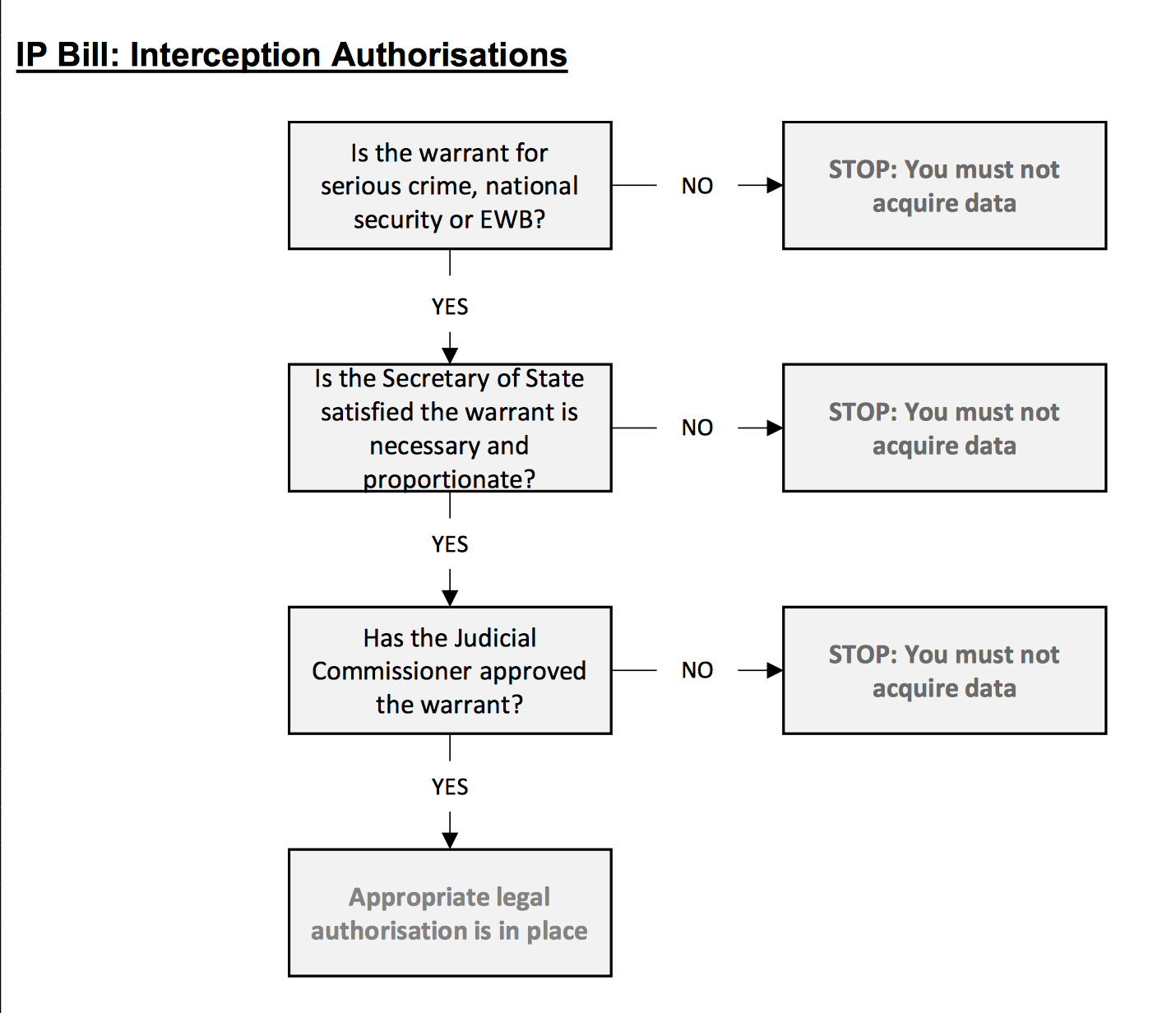 PI also went on to say that “the IP Bill currently does not contain any provisions to address this evidentiary concern. Without such safeguards, the efficacy of the use of hacking in investigating and prosecuting crimes is very questionable.”

It has also been recently announced that Theresa May will be rushing the bill through Parliament to avoid scrutiny.

Critics have argued the Home Secretary is making the most of the Britain’s focus on the EU referendum campaign.