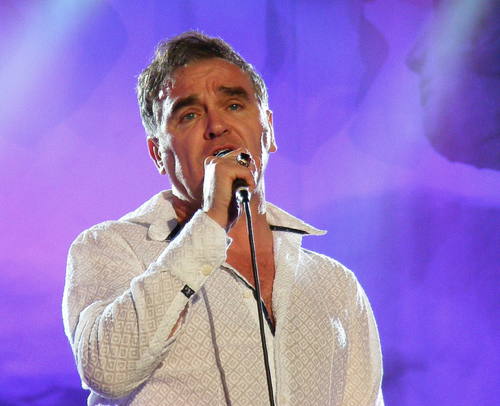 In the grand tradition of rock stars averting their attention to pursue careers in politics, Morrissey has been approached by the Animal Welfare party to run as their candidate for London mayor.

An avid supporter of animal rights, Morrissey issued a statement saying he is ‘considering the contest very seriously’.

On the website and online Morrissey zine True to You where fans can keep up to date with all things Morrissey, he released a statement  expressing the need for a candidate concerned with animal rights.

“Animal welfare groups cannot persist simply in order to continue to persist. There must be a governmental voice against the hellish and archaic social injustice allotted to animals in the United Kingdom simply because those animals do not speak English, otherwise millions of very caring citizens are greatly concerned about issues that no one is able to do anything about.”

The True to You website also features information and links to videos about animal welfare, including the controversy over the dairy industry, which Morrissey addresses in his statement.

“Animals in dairy farms and abattoirs are very eager not to die, yet their bodies are torn apart whilst still alive as they are strapped beneath a blade.”

Morrissey continues to discuss how a “society without compassion goes nowhere”, and urges readers to notice the injustice faced by animals in abattoirs.

He also notes that “if you are a part of the milk-drinking population, then you condone systems of torture”.

Arguably, the use of hyperbolic statements throughout his manifesto, contribute to the power behind what Morrissey is arguing.

Questions such as “If animal serial killer Jamie Oliver feels so passionate about including ‘kid meat’ (young goat) into the human diet, would he consider putting forth one of his own kids (children) for general consumption?” despite being absurd, do beg the question; why is society so blasé about the methods of the meat industry?

Despite some backlash, this statement isn’t just a slanging match at carnivores urging them to stop eating meat, but illustrates the problems with the inhumane slaughter of animals particularly in the British meat industry.

It’s a problem in which animal rights campaigners have been trying to indentify to the government for years, but arguably Morrissey’s influential power as a mayoral candidate may help bring the issues to light.

In order for his name to appear on ballot papers, Morrissey requires 330 signatures, which is essentially 10 from each London borough.

Other musicians who’ve attempted to gain credit in the political world have been seemingly successful such as Peter Garrett from Midnight Oil who became Australia’s minster for environmental protection.

Morrissey’s stance as an influential figure of rock music, and The Smiths continuing status of legendary music stemming from the 1980’s to the present day, make him a considerably attractive candidate for public support.

A wild card in the mayoral candidacy might be just what London needs in order to make people aware of hidden issues which unknowingly affect the public on a daily basis.

After all, it would be in keeping with the title of The Smiths’ 1985 album, Meat is Murder.