When I first met Ben Eine, I was sat at the Dragon Bar in Shoreditch, where he stumbled over and plucked a cigarette from my packet without asking – I’m used to that sort of behaviour because I work there – so said I’d join him.

Standing outside he pointed at one of London’s most famous bits of street art: ‘SCARY’ on Rivington Street and proclaimed “I painted that”, to which I laughed and replied “bollocks did you”.

Turned out he did, and that he’d just been booted out of America for an expired green card. Eine was back in town.

When I meet him again a week or so later it’s down Ebor Street, that colourful alley opposite Shoreditch High Street station that’s home to work from the likes of Shepard Fairey and others.

He’s covering up an old piece that’s been tagged over so many times it’s indecipherable with the words LIKE NOTHING ELSE, a smart but simple ode to being back in London:

“After being in California for three and half years, it’s just fucking boring, everyone looks the same, the weather doesn’t change, it’s always hot and sunny, I was coming back here and like, really not looking forward to coming back to London”.

“When I got kicked out, and I got back here – it was like dude – everyone looks different, everyone’s got their own style and some kind of individuality, and I was just kind of like: ‘what the fuck was I doing living in California?’ This is where I’m from, this is where I grew up, this is where everything I love is, so yeah, London is ‘like nothing else’”. 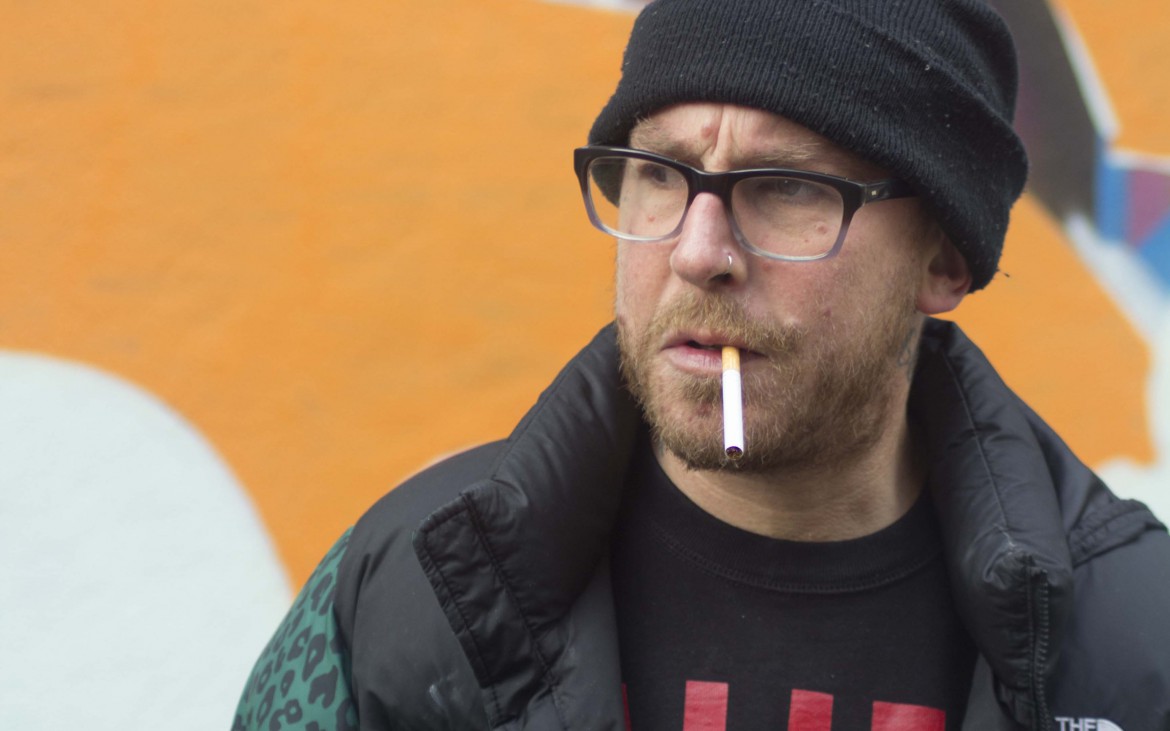 Back in his old stomping ground, it seemed apt to discuss how he first got into street art, but in actuality, he didn’t.

Eine “got into graffiti” by stealing a photobook called Subway Art, “made by these two middle class white people from New York called Martha Cooper and Henry Chalfant”.

In a strange, almost destiny-like irony he now knows both photographers well, especially Martha Cooper, who he described as a “really good friend” and recommended the exhibition of her life’s work at StolenSpace Gallery in Whitechapel.

The book was instrumental in moulding his fascination with graffiti, and quickly became a sacred reference – “the first thing I ever stole” – it was like his Bible.

“I just looked at it like all day every day –  I couldn’t believe there were people in New York, painting these fucking insane trains”. So he picked up the can and an obsession, now spanning 30 years, began.

Like most influential street artists he started tagging trains, bridges, anything he could – but kept getting caught and arrested.

Asked how many times he’d been nicked I got a cheeky smile and a reply of “mate, loads”.

It got to the point however, where he had to give up graffiti “because they were going to send me to prison” and so Eine found a new direction in the emerging street art scene: “I didn’t want to stop painting, but I didn’t want to go to prison – this was around the time Banksy was picking up a little bit and street art was beginning to happen”.

Hopping on board a new wave of art that legitimised his love for spraying and typography, Eine started to paint shop shutters with giant letters of the alphabet, during the day, without permission.

One of his most well known early pieces is SCARY – I had previously heard a story about the meaning behind it from Dario Illari at Jealous Gallery.

Supposedly Eine looked at the sheer scale and audacity of what he was about to do and thought “shit this is scary” but speaking to Eine the meaning is a lot deeper:

“The inspiration behind it, was that, well not anymore, but people used to believe that if someone can tag the side of a wall – where’s the police? where’s the law? where’s the order? – so if they can tag the side of the wall, they can smash my car window, steal my stereo, if they can do that then maybe they can grab my daughter and rape her, so it’s like graffiti was always portrayed as this scary thing that meant law and order was falling down and it’s totally not. So I painted scary because it’s a bit of a tunnel, and it’s not at all scary, it’s actually quite nice”.

Since then, street art has grown exponentially to become an international movement with an array of styles and household names.

From the typography of Eine, political commentary of Banksy, mosaics of Invader: the scale of the scene is on par with that of the greatest historical art movements.

In the UK alone, London, Bristol and Manchester are a haven of giant murals from the biggest names in the world.

In East London however, this has come at a price, in that the appeal of a cool but gritty, vibrant environment has brought in so much money and tourism that it has priced Eine out of the area.

In a cruel twist of irony, the place he aided in gentrifying is now too expensive for him to live in.

“When I lived here like 30 years ago this street was just dirty hookers and fucking smack dealers – and look at it now – it’s all fucking APC, Shoreditch House and Mother Bar – it’s like street art definitely has a role in gentrifying a neighbourhood – which is kind of ironic – because the reason we all lived in Hackney in the first place was because Hackney was this one borough that didn’t have the money to clean off graffiti, so we’d paint shit, and they wouldn’t clean it off”.

Now the council’s reluctance to clean the art off is for the opposite reason – pieces like SCARY and Alphabet Street are protected as a tourist attraction for the graffiti tours that frequent the area “which is ridiculous because I painted scary without permission, totally without permission”.

Eine was a household name to those in the street art scene, but beyond that his reach was limited to its followers.

This all changed in 2008 when he got a call from Anya Hindmarch, “this posh handbag lady” who he had previously designed tote bags for.

Coincidentally Anya is a good friend of Samantha Cameron, and she asked Eine if he had a suitable piece of work that David Cameron could give to President Obama as a gift.

“Just surreal, weird” is how he described the experience. Within a week some £80,000 worth of his work had been sold at various galleries.

Despite the most powerful man in the world owning a piece of his work and his having had tea with David Cameron, however, he’s not a political artist:

No totally not, I’m not political, I write on the side of a wall in Shoreditch where I can’t afford to live anymore ‘EXTORTIONISTS’ that’s about as political as I get – I’ve never voted.

I had ‘vote conservative’ tattooed on my leg but sort of thought, I better get ‘Don’t’ written above it.

I had tea and biscuits with the Prime Minister and I think got vote Conservative tattooed that afternoon as a joke. He (the PM) was actually really fucking cool, I had a laugh with him, he’s just down to earth and normal really.

Eine’s fame has risen to the point that big names like Body Shop, Smirnoff and Virgin Airlines have paid him to fly around the world to design and paint.

In the next few months alone he’s flying off to Dubai, Tokyo and Berlin to “paint shit”.

Cities from LA to Hastings have had a dash of his trademark colour-matching and the proclivity of his giant lettering, but he hasn’t let the recognition get to his head, and still finds it odd when people stop him in the street. 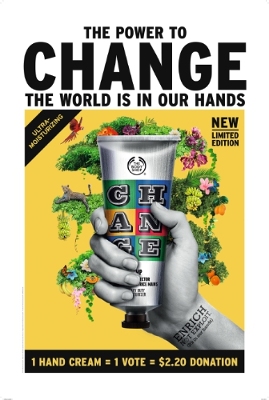 The heights Eine has reached weren’t anything he could have ever envisioned when he was tagging trains, and certainly wasn’t the reason he started out – “I started this because I loved graffiti and wanted to paint trains, like, I’ve just always done it with a passion and a drive, I’ve got a massive addictive personality and running away from the cops was such an adrenaline rush”.

Contrary to naysayers who thought the street art scene was little but a fad, it’s still thriving and relevant, and will be “until something else comes along”.

Arguably it’s a way for art to be accessible to the masses – the walls are the gallery and it’s top players are famous outside the realms of the street – many have thousands of followers on Instagram, sell out every show they put on and are instantly recognisable by their distinctive styles.

One issue with the rise of the popularity of street art is that its demand outweighs the supply – to the point that work by household names like Banksy are stolen from the walls they were first sprayed on.

Speaking to Eine about what essentially equates to the commodification of street art, he told me that he doesn’t “think it’s right that the stuff that Banksy paints in the street gets cut out the wall and then sold at auction, it’s not what he wants to represent him, it’s stealing”.

In a recent interview Eine talked of how street art was “supposed to be enjoyed by everyone” and how keeping the pieces in situ was important because “no one goes to art museums”. When I spoke to him he’d changed tune slightly though, saying that:

“When I went to this Keith Haring exhibition, in this museum called the de Young in San Francisco, everything in this exhibition was shit, apart from these old chalk drawings on the New York subway posters, that somebody took off the wall and stole, and it was totally the best thing in the fucking show, it was historical”.

“I was like, maybe in a hundred years time, all of Banksy’s paintings are going to be in private collections, the owners of these paintings aren’t going to lend them to a museum like the de Young, so the only thing they can get is a wall that he painted in Croydon”.

Asked about his own future, he tells me it’s not his street art he wants to be remembered for – most of it will eventually get sprayed over.

Although he experiments in other mediums, it’s the screen prints and canvases he produces in the studio that will define his legacy as an artist.

Clearly, talking about a hundred years down the line, Eine sees a promising future for his career and street art as a movement, he tells me he “can’t see anything else that’s going to come along and be as big”.

I asked what advice he might have for any UAL students interested in pursuing a career in typography or street art and his advice was blunt, nonchalant: “don’t use a computer, do it by hand. I love sign writing – people that paint signs are my gods. The hand-made, hand-drawn elements will never die, so do it by hand.”