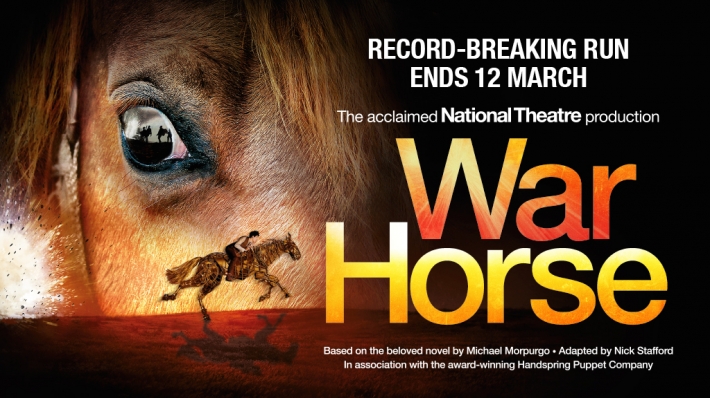 War Horse was originally a children’s novel, written in 1982 by Michael Morpurgo – read by thousands of children, the phenomenon was turned into a blockbuster film in 2011 by Steven Spielberg.

Adapted for the stage by Nick Stafford, War Horse first premiered in front of a live audience at the National Theatre in 2008. A year later it transferred to the New London Theatre, and crowds still flock to see the award-winning production.

Set in the First World War, the play follows a young lad from Devon, Albert Narracott, and the relationship between him and his horse. Joey, a half-thoroughbred which ends up in the hands of Albert’s father after a drunken auction.

When the horse gets sold to the cavalry in 1914 Albert is devastated, too young to enlist himself, he takes matters into his own hands to get his horse back.

So what is so special about the play? It has been running for eight years and in 2009 Her Majesty The Queen and her husband Prince Phillip went to see the play, making it their first public theatre visit in four years. So there must be something.

There is one stand-out USP of the show: the puppets. A life-size (if not bigger) Joey was created.

At first one may doubt the use of a puppet. Can a puppet really display the seriousness of the First World War? You would be forgiven in thinking that it couldn’t, until you see the show.

Created by the South African company, Handspring, the horses are quite the sight to behold. Operated by two puppeteers initially, for the foal, and then eventually four for the fully-grown animal.

At first it was impressive, the foal was obviously very realistic, and the puppeteers very skilful.

But it soon became almost an optical illusion. At the beginning all I could focus on was the puppeteers, 20 minutes in and I hardly remember they are there. From the twitch of the animal’s ear, to their quivering flanks, it really is a marvel.

The story too, is marvellous. Realistically brutal, yet exceptionally heart-warming. It really gives you an idea of what life was like on the battlefield.

The show ends its record-breaking run at the New London Theatre on 12th March 2016, and I would urge you to see it.