Was Kim Kardashian West right to post that nude?

Kim Kardashian West is very well known for being confident when it comes to revealing herself online; she always knows how to break the internet, whether it’s a controversial magazine cover, to something she has said on social media – I mean, it’s Kim Kardashian!

With more than 1.4 million likes on her Instagram, where she has a staggering 62 million followers, she received a number of mixed reviews.

Another user Joey commented: “Put some clothes on please”.

Despite these negative comments, Kim did receive some nicer ones as well.

Another Instagram account, Marimar, says: “It makes me really sad to see a lot of comments shaming her for showing her body. It’s a body, EVERYBODY HAS ONE, and she chooses to show it because she feels confident. I don’t know what the problem with a woman loving her body”.

It wasn’t just fans that had something to say about the picture, other celebrities felt they needed to comment on the image through their social media too. 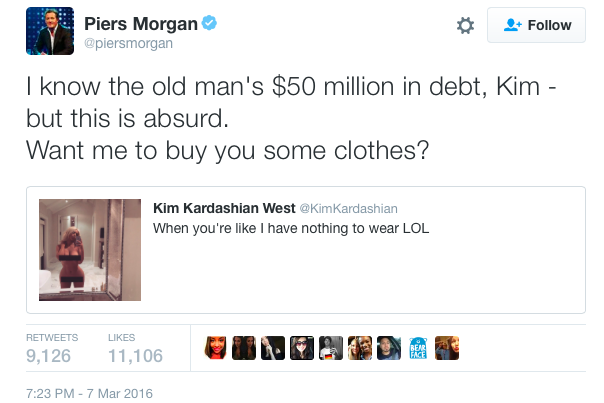 Journalist and TV personality, Piers Morgan, took to Twitter and said: “I know the old man’s $50 million in debt, Kim – but this is absurd. Want me to buy you some clothes?”

Actress and comedian, Bette Midler, also commented on the naked selfie of Kim: “Kim Kardashian tweeted a nude selfie today. If Kim wants us to see a part of her we’ve never seen, she’s gonna have to swallow the camera.”

It is very unlike Mrs Kardashian West to take a stab at celebrities via her social network, however, her husband Kanye may have influenced her outspoken replies.

She also replied to Bette Midler twice during her Twitter spree: “hey @BetteMidler I know it’s past your bedtime but if you’re still up and reading this send nudes #justkidding”

and a few minutes after she continued with: “hey @BetteMidler I really didn’t want to bring up how you sent me a gift awhile back trying to be a fake friend then come at me #dejavu”

These replies caused even more of an uproar on Twitter, as everyone thought Kanye had hacked Kim’s account; this later lead Kim to assure fans neither Kanye or sister Khloe had hacked her account.

While posting the picture so close to International Women’s Day – which was on Tuesday, March 8, was Kim just embracing her body? Or was it wrong to post a picture so revealing?

Biology Student, Elizabeth Matthews, told Artefact: “International Women’s day is about embracing being a woman, and empowerment, and if posting a revealing picture of yourself to million’s of people to see empowers you, then so be it.

“At the end of the day, Kim Kardashian has more money than I could ever imagine having, so she can basically post what she wants – she doesn’t care.”

With mixed emotions over the picture, it is clear not everyone is going to agree with it. When you put in perspective that Kim is a wife and a mother, it sometimes upsets members of the public.

Jordan Lewis, who works at a PR firm, said: “I think that she [Kim Kardashian] is setting a poor example for her young children, especially in a time when women are fighting for things such as equal pay and equal job opportunities.”

Despite this, it is undeniable that she has made an impact in the celebrity world, with a number of people, including Sharon Osbourne, copying the famous mirror selfie after being ‘inspired’.

Other celebs including Amber Rose defended Kim in an Instagram post on March 9: “And @kimkardashian I don’t know u well but I saw u speak about slut shaming and as u know I’m an activist feminist so it spoke to me.

“Being Slut shamed and ridiculed is not fun it’s hurtful and mean. Us women deal with it everyday and I’m happy u can speak openly on this now because if anyone knows what it’s like to be Slut Shamed it’s u! Live it Kim! Make a difference and speak on it”.

It is certainly clear not everyone is going to agree with the way Kim Kardashian portrays herself, some people are going to hate her, and others are going to love her, but Kim has made a living out of being controversial to the public eye – and this is what she does best.

How the pandemic boosted micro-influencers