As International Women’s Day passed, the achievements of women worldwide, through social, economic and political achievements were celebrated.

Internationally known figures took to social media to lend their support on a day that not only is designed to celebrate, but to also take action by donating to women-based charities, pledging support and running campaigns.

The official International Women’s day website are running a #PledgeForParity where you are able to pledge an idea in order to help achieve gender equality and be a leader of your own ideas.

This campaign has proved successful, with more than 60,000 people pledging through the website and the hashtag has proved popular on twitter, with Emma Watson offering her support.

The actor is a prominent figure when it comes to gender equality – in 2014 she gave a speech at a UN summit about her campaign, HeforShe and is now considered a voice for many females around the world.

The campaign, uniquely, is mainly targeted at men and boys by encouraging them to take action against women who face prejudice based on their gender.

Twitter have even launched their own HeForShe hashtag emoji – on a day where thousands of tweets paid tribute to women who have shaped the world.

At the time of her speech, Watson aired her views passionately and also tackled the issue of feminism, expressing her thoughts about the stigma attached to the word by saying: “Why is the word such an uncomfortable one?”

She continued to back her campaign and the idea of equal pay, questioning why should women be paid less than their male counterparts in the same field of work.

The campaign is not one that has been done before, and by trying to specifically involve men, the initiative can be considered unique.

Watson came from a privileged background herself and while discussing the negativity labelled at the word “feminist” she also added: “And if you still hate the word — it is not the word that is important but the idea and the ambition behind it. Because not all women have been afforded the same rights that I have. In fact, statistically, very few have been.”

Gender inequality is a heavily discussed topic and the subject is not a recent one. In 1995 Hilary Clinton made a speech about women’s rights in Beijing and Emma Watson alluded to this in her speech adding: “Sadly many of the things she wanted to change are still a reality today.”

Emma Watson is most famously known for her roles in Harry Potter. However, these days, Emma Watson is considered a voice for women and with the campaign being backed by people such as Barak Obama, it is expected to achieve success and drive men to get involved in this campaign. 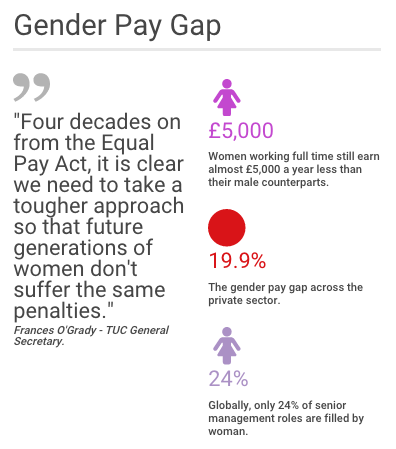 Infographic presenting the inequality in pay between men and women. Statistics gathered by The Guardian via the TUC.

She has even taken a year out of her acting career in order to pursue her own goals of gender equality, proving she is still very committed to her campaign, HeforShe.

#PledgeForParity, launched by International Women’s day, is also backed by the founder and CEO of Virgin, Richard Branson: “I’ve always felt strongly that the best places to work are those that foster an inclusive culture – one where differences are celebrated and our people can be themselves and feel at home,” he said.

“That’s why, on International Women’s Day, I support the Pledge for Parity. It’s an important reminder that all of us in business can and must do so much more to promote equality, respect and fairness,” Branson added.

Why does it still remain important?

Gender inequality is still prominent in countries today. It is important to note that it is not just developing countries or underdeveloped countries who possess problems of inequality, it is still an issue in the UK.

As recently as February 2016, firms were forced to reveal the gender pay gap and address the issue of pay differences between male and female employees.