Exploiting it is a documentary about the exploitation of Muslim women in the mainstream media.

The film shows different perspectives from Muslim women who were at the centre of media attention in recent months due to their cultural and religious background.

In the documentary, writer and director Nadia Latif discusses why her play was banned two weeks before its opening night, due to pressure from the government to prevent risks of radicalisation.

The theatre production Homegrown was a reproduction of the conversation British Muslim schoolgirls had before joining ISIS. Yet the police asked the production team and Nadia Latif to hand over a copy of the play and planned to bring undercover security during the play.

In Exploiting it we hear other women share their stories of how they are perceived as Muslim women. We discover that self-censorship and freedom of expression play a big part in the creative sector, with female artists being given only one narrative to explore.

The recent media portrayal of Muslim women often gives a very negative view on their behalf, representing Muslim women as oppressed and subject to male dominance. The film offers an insight into what these women think of them being portrayed a certain way, and who in reality is able to make decisions on someone’s behalf.

“Originally, I thought I was going to make a different documentary about an Afghan female graffiti artist who was now living in Europe,” says film director Jade Jackman.

[pullquote align=”right”]“They were constantly being referred to with their gender, race and religion attached.”[/pullquote]

“As I researched her, I started to become more interested in how female artists are never just referred to as artists; they were constantly being referred to with their gender, race and religion attached,” Jade Jackman tells Artefact.

The stigma attached to the Muslim community due to the recent moral panic in the media and in the debate on terrorism have led to another form of exclusion experienced by these Muslim women.

“Whilst I am fully aware that this is not by any stretch a new discovery, it became what I was more interested in terms of whatever Muslim female artists and people in the public eye would have the same response to them if they couldn’t also be utilised as a success story for European imperialism,” says Jackman.

The film offers an insight into the lives and working space of women who recently have been at the centre of attention from the media and the public.

The film interviews Sarah Maple, a London-based artist whose work has evolved around feminism, gender and race.

Maple made photographic series portraying herself with a hijab smoking a cigarette, and in another one, carrying a pig. 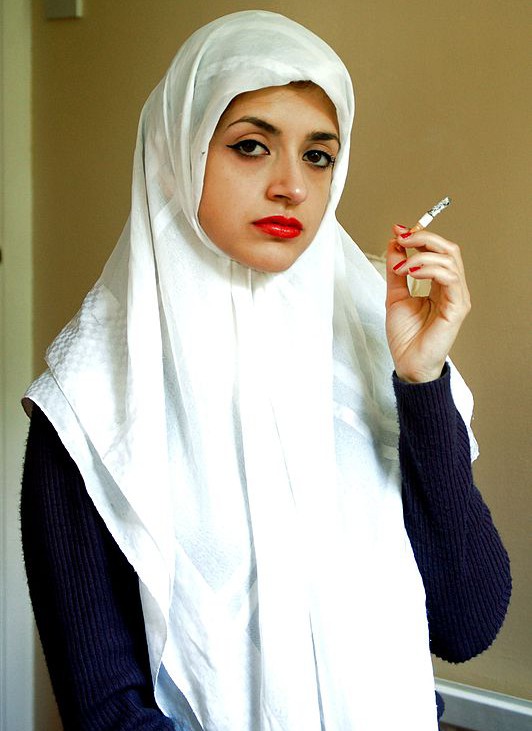 The artist talks about the death threats she received since her artwork was exhibited in various galleries in London.

When her painting – portraying her in a hijab with a pig – was first exhibited in London, someone threw a brick through the gallery’s window.

That attack left Maple worrying for the safety of her family and friends, as she felt she couldn’t entirely express herself in the face of public criticism.

Censorship in the arts is more common today, especially after the recent terrorist attacks in Europe.

This censorship and fear of the other grew since new governmental legislation in the UK, with the controversial and hotly debated Prevent Strategy.

Prevent allows inquiries and investigations on university campuses and educational spaces to people who show signs of radicalisation.

The Counter Terrorism and Security Bill led to protests from women and minorities in England, claiming the Bill was institutionalising racism and further marginalising those already stigmatised.

“Majority of people have been quite shocked by the stories such as Nadia Latif and the line when the woman from Index of Censorship says that people would only be accepting of a certain kind of narrative from a Muslim as it shows the lie of freedom of speech in this country,” says Jade Jackman.

Jackman was interested in how art could be combined with storytelling in documentaries, as she believes that changes with the traditional way of conveying information can bring new questions in how we perceive issues and conflicts.

Exploiting it is challenging the mainstream perception we have of Muslim women in the modern world, and how this image creates false perceptions when one interacts with these women.

In the documentary, we hear from LCC student Hani Richter, who was asked to pose as an Islamic State recruit for a Conservative British magazine.

Other interviewees include Julia Farrington from Index on Censorship, who talks about the self-censorship being practiced by women and artists in fear of getting in trouble.

There is also Sara Shamsavari, a British-Iranian visual artist and photographer, who documented in a photographic series the religious clothing Muslim women wear in the Western world.

From London, Paris and New York, the portraits reveal young Muslim women wearing fashionable, bright and colourful veils, far from the dark and full covering niqab we see in newspapers and tabloids.

Exploiting it is one of the rare films which gives women a platform to speak up and share feelings and thoughts about what it means to be a Muslim, a feminist, a woman.

“It is important to me for the film to have a debate afterwards because there are lots of things that the film touches on,” says Jade Jackman. “So I sort of see it as a springboard for conversation rather than a conclusive entity.”

The film brings central governmental policies on the frontline, which bares the question of how political decisions should be made in the long-term.

The participants and makers of Exploiting it appear to have one thing in common: these women have developed a sense of political engagement through their own identity, whether they are a practising Muslim or not.

Exploiting it is youthful and compelling to watch. By keeping her film so focused, Jade Jackman succeeds in making the viewers reflect and think about his or her own identity, and how severe judgements can be for those who have been at the forefront of the media frenzy in recent years.

The film is more than a documentary for Jade Jackman and her co-workers, who believe the debate is just the beginning to rethink and change mainstream attitude towards women of Muslim origin.

The film is turning into a multimedia project, with the creation of a zine and artworks evolving around the documentary.

Exploiting it was crowd-funded at indiegogo.com

By Alexandra Andronache
9 Mins read
How Muslim women living in the UK are working together to tackle Islamophobia and sexism.
News

By Sophie Patrick
2 Mins read
The Wildlife Photographer of the year is open at the Natural History Museum and is full of intriguing images from across the animal kingdom.
Culture