History tells us that demonstrations, protests and riots have always been a way for people to proclaim their rights out loud.

In a few occasions this hasn’t been the case, and protests did not serve the purpose to defend those rights for the people but to reiterate their dissociation towards the rights of others.

And yet this has often happened in Italy with the so-called ‘Family Day’, an event organised several times in the last few years by different political and religious parties.

‘Family Day’ is an occasion to defend traditional family values. During each event there are members of different right-wing political parties, ecclesiastic and religious institutions as well as ordinary people.

There are politicians, MPs, senators, nuns, priests and cardinals, psychologists and other people who believe in the sacrality of what they call ‘the traditional family’: a family composed of a mum and a dad, a man and a woman, institutionalised by a legal and religious marriage and because of that, worthy of living under ethical, religious and legal conditions.

A few thousand people who share the same belief: that each child needs a mother and a father legally married, a phrase that you hear a lot in Italy today.

Meaning no to civil unions, and definitely no to gay unions.

The very last ‘Family Day’, in January, was organised to protest against the legislative proposal Cirinnà, named after senator Monica Cirinnà, and aimed to guarantee legal protection for civil unions of both straight and same-sex couples. 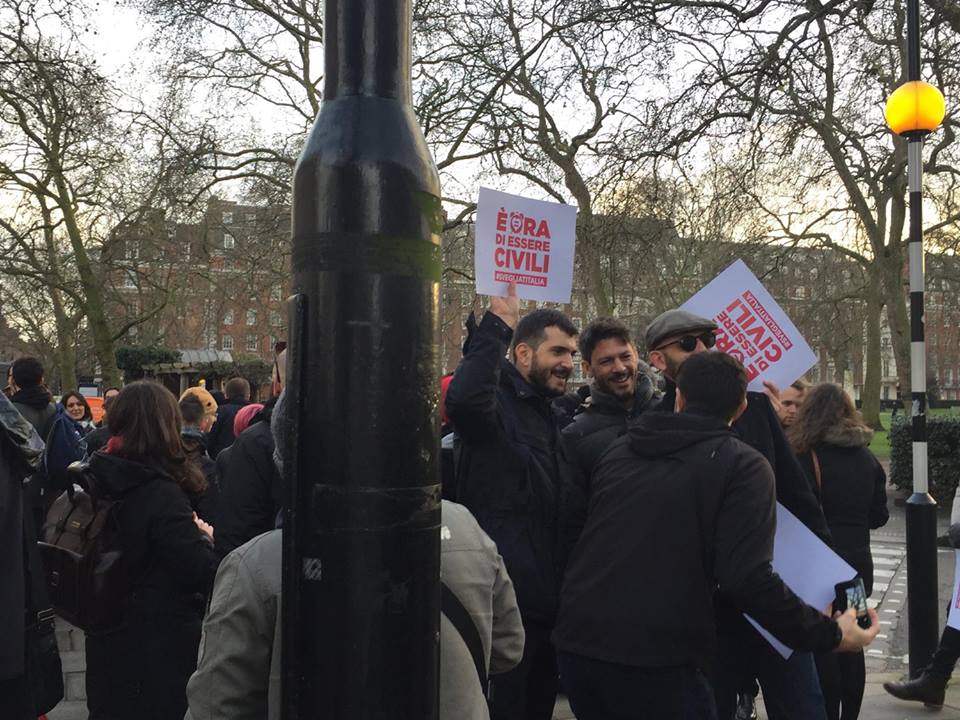 Gay marriage is still not being contemplated, even though the European Union is pressuring Italy to keep up with other countries; Italy is the only country in western Europe that don’t recognise civil unions and gay marriage.

In July 2015, the Italian Government was condemned by the European Court of Human Rights in Strasbourg, urging Italy’s Prime Minister to legalise same-sex civil unions.

This came after various Italian gay couples decided to appeal at the European Court after they were denied the right to be united in a civil marriage.

On that occasion, the European Court condemned Italy for the violation of Article 8 in the European Convention on Human Rights, which guarantee the right and respect for anyone’s private and family life.

The legislative proposal Cirinnà recently approved by the Senate on February 25th, 2016 has been through a number of cuts and amendments and so does not resemble its original content.

In origin, the main points of the proposal were:

Rights that by no means could take something away from those who don’t agree, but in spite of everything, civil unions will continue to exist and gay couples will continue to fly abroad to fulfill their desire to become parents.

The proposal has been approved, but not the most important part of it: stepchild adoption. For many gay people this feels like a compromise in order to make a good impression on Europe and to please both Arcigay (the LGBTI Italian organisation) and also conservatives, political parties and catholics.

It is also a contradiction, and some people might wonder what the point is in giving people an opportunity to get married without giving them those rights that every legal marriage should have, such as being able to legally adopt their partner’s son or daughter.

It’s a decision that clearly puts in risk the future of many children of gay couples.

As the council of Europe’s Commissioner for Human Rights, Nils Muižnieks, said: “[The decree] will not create new rights. It will simply eliminate discrimination based on sexual orientation.”

The opponents’ worries are based not really on what changes the legislation will bring, and what it could’ve brought if it would have been fully approved, but on what could happen right after that.

There seems to be a general confusion in the words of people interviewed at the ‘Family Day’, who often end up talking about the possibility of legalising gay marriage or gay adoption even though those issues are not even debated in parliament these days.

The general idea is that, if homosexual people will get these rights now, they will end up asking for more and more.

History tells us, again, that when rights that are considered fundamental are put in doubt, people will take to the streets and say it.

In support to the proposal, and against ‘Family Day’, one million people have participated in the event ‘Svegliati Italia’ (Wake Up Italy) in several cities, and they did it again when the legislation was partially approved.

From North to South, people took to the streets armed with colours and alarm clocks (literally) to be used at the same time, as a proof that many Italians want a change.

It is peculiar, in this respect, how the Italian media and show-business industry have given their solidarity to the cause: the biggest annual music competition that airs on TV every year, the Sanremo Festival, has seen every performer who went up on stage wear some rainbow-coloured accessory, and the presence of Elton John as a music guest has been suspiciously commented on by various political opponents on the internet.

Wake Up Italy happened in London, too, right in front of the Italian embassy. And that is because London has become the fifth city in the world for Italians, after Rome, Milan, Turin and Naples. 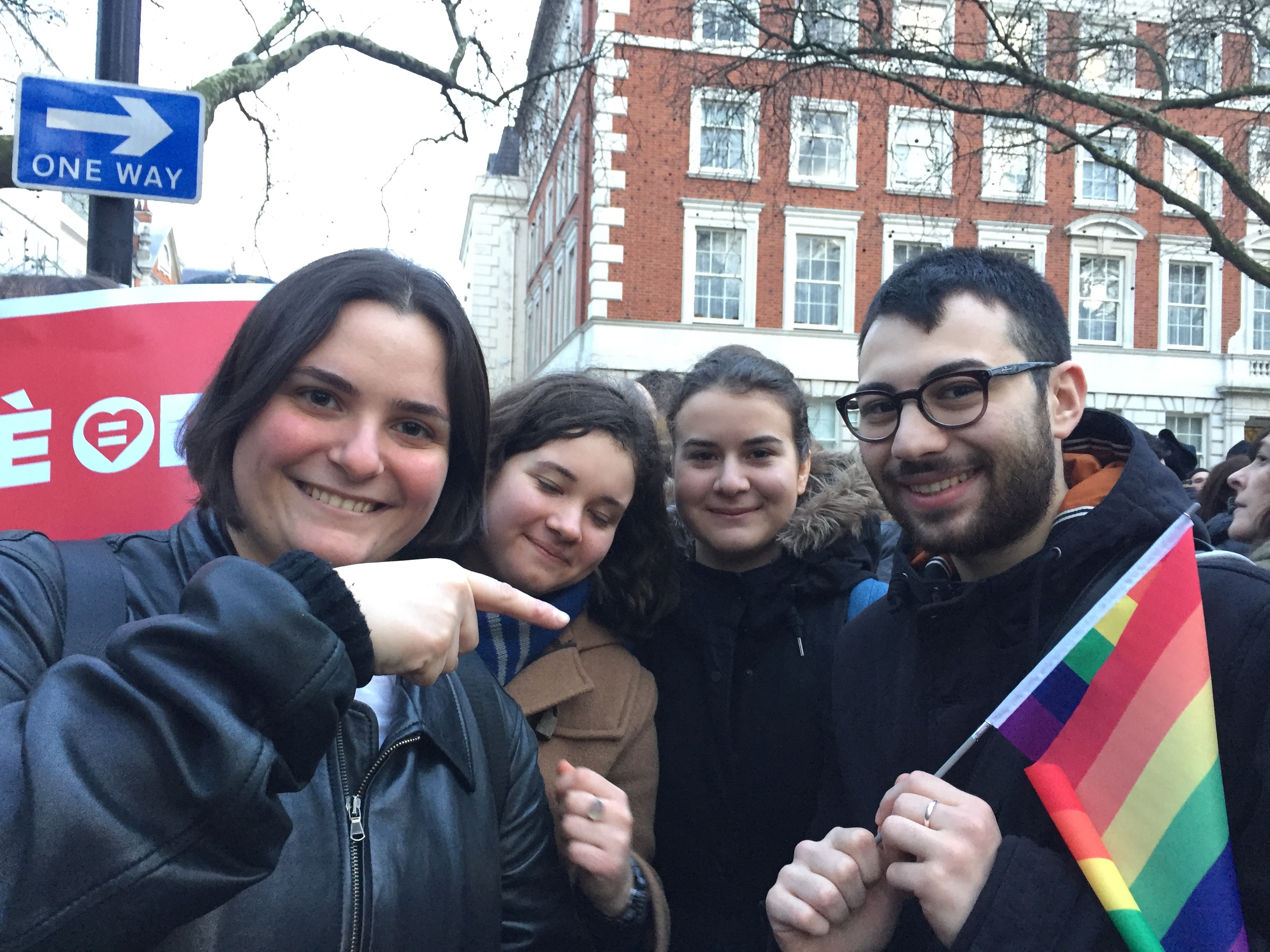 And that is also because people choose London for many different reasons that go from looking for better economic expectations to a better education, but amongst them there’s the possibility of being respected, which is not even only a matter of legal protection anymore, for who they want to be, or love, like it is a granted condition, something largely rooted now in the British way of living.

“The reason why I’m here today is because I support human rights,” says one of the protestors, Andrea. “That’s why I literally ran away from Italy, because I needed a place where my relationship with my boyfriend can not only be accepted, but protected too.”

Chiara, who is going to marry her fiancee soon, said: “I’m here because I still don’t accept the fact that I had to migrate in order to just get married. We’re having our families fly over here for the wedding, and they are going to pay for that because it’s not something we can afford at the moment.

“I wish we could just do that in our country. Since that’s not possible, at least I want to have rights there, and if we’re going to have children, I want legal protection for them. What if I’m the legal parent of my kids and something happens to me…what if I die and not even my wife, their mother, can adopt them?”

Giacomo, who now has an English boyfriend that he met in London, told us: “When I was in Italy I used to think I wouldn’t ever find a boyfriend, because the gay scene over there exists but it hides. It hides all the time.

“It’s like other people don’t even know about it, or they try to pretend they don’t, they like to think that gays are just a myth created for some sociologic experiment. I’m not saying that there aren’t prejudices in London but overall everything is easier. Finding love is easier too.” 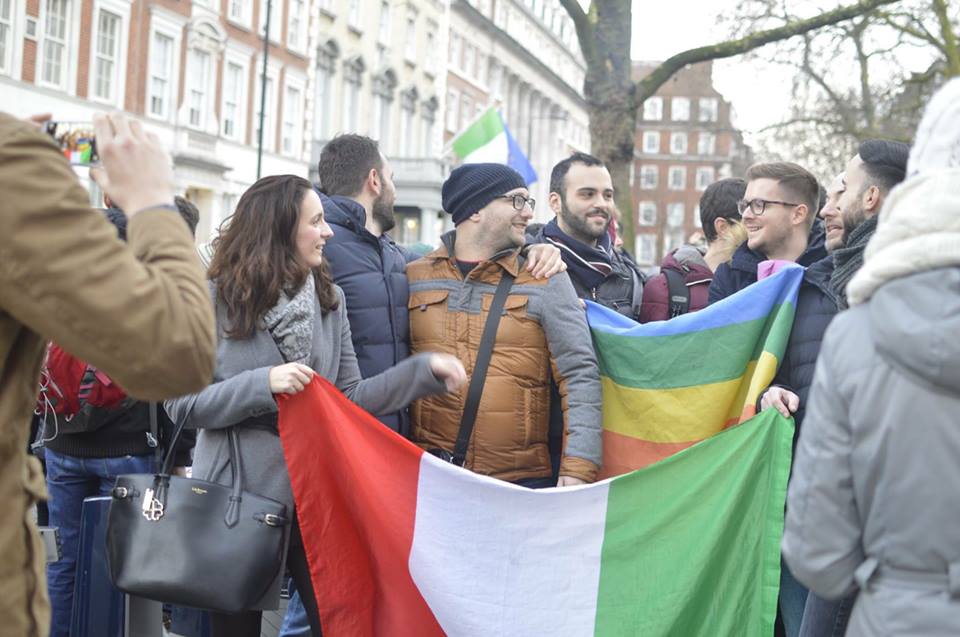 It is true that the idea of ‘family’ is based around Italian history. In a country where young people still live at home far into their 30s, prevented by the economic crisis to seek independence, the nuclear family becomes a nest from which it is difficult to spread their wings and take off.

And so, the roles of mim and dad are romanticised to the point they become modern heroes of a society that is not made for young people.

The stereotypical picture of the Italians is that image of a large family that sits down every week for Sunday lunch as a cultural tradition.

An idea of family that has deep roots in history, and is still tied down with what twenty years of Fascism had praised: women as good housewives, men as authoritarian fathers, a sense of extreme devotion towards elders, encouragement to have as many children as possible.

Those are concepts so deeply rooted in Italian culture that even talking about different family models arouses defiance and mistrust in some people.

And yet again, history has told us that time goes hand in hand with education: maybe the right time has come to make a big step and realise that Italy can’t have it its own way anymore.

All images by Natalia Carcame