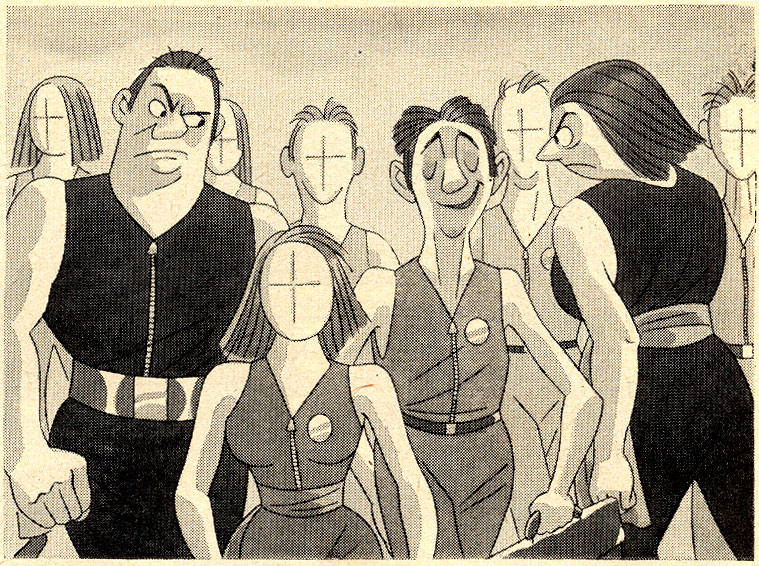 In 2084 or the end of the world, Boualem Sansal takes George Orwell’s 1984 novel for inspiration to create a tale against theocracy.

The vast kingdom is named Abistan, taken from the designated prophet, Abi.

The system is based on amnesia and submission to one and only God.

A totalitarian and sectarian system enravels its inhabitants who are imprisoned and banned from almost everything we consider as human rights.

Everyone must follow the god Yölah. The system is based on amnesia and submission to one and only God.

Any personal thought is strictly forbidden and a large-scale surveillance system is put in place in order to track people’s thoughts.

Officially the people in Abistan are all living in bliss and ultimate happiness from blind faith. It is forbidden to doubt, even once.

There is no history, as this system is built upon stringent codified rules and rituals, so precisely set it cannot be contested. Yet one man starts to doubt.

This man, who we learn is Ati, tries to understand and start wondering into the search of another world of renegades, who live in the ghettos and don’t follow religion.

In this novel not a single instance of the word ‘Islam’ appears, yet it is clear that radical Islam is being denounced through the novel.

“Balis” is the diabolic antoynym of the Yölah God, and the Abilang is often monosyllabic, vacuuming any possible thoughts.

In the first part, Ati is almost cured and ready to leave his sanatorium, the medical facility located in some far-distant mountain where those who suffer from tuberculosis and other long-term illness are sent for recovery.

The return back home lasts one year, during which he crosses wrecked territories stained by abject poverty until he gets to Qodsabad, the capital.

There he finds a flat and work as an archivist, yet he is unable to find the strength to become an active fervent disbeliever.

But his curiosity will drive him towards the “Renegades guettos”. The place is derelict, filled with walls covered with outrageous and blasphemous graffiti, and flirtatious women who seem free.

This world is so surprising and contrary to what Ati and his friend Koa know, they start to doubt the very reality they are surrounded by.

The episodic narratives unfolds and mingles: between those devoted to Ati and those kept in the immense world dominated by the powerful Abi, where everyone lives in abject poverty.

Right in the middle of the novel, the reader feels the characters’ anxiety and troubles. Will Ati and his friend get caught during the discovery trip? Is it just a test and soon they will be punished under the dreadful Abi’s law?

In a bizarre volte-face, Ati gets into a lavish world where Abilang isn’t spoken, and where a conspiracy will soon be revealed to him, triggering the doubt that another conspiracy is hidden under the first one.

Similar to Aldous Huxley’s Brave New World, the hero gets closer to the cogs and secrets of power, not without visiting the “20th century in a museum”.

“Faith started with fear, only to end with submission.”

Who knows if Ati will be able to cross the mythical barrier, whether he is invited or trapped into it.

Boualem Sansal’s book is a tale and a philosophical essay: “Faith started with fear, only to end with submission.”

In his novel the government feeds a counter movement, in order to better alienate its citizens in a holy war impregnated with victims and martyrs.

Science fiction is intertwined with crude realism, where the atmosphere is oppressive and worrying; all is told to form the basis of a dystopian world.

Yet contrary to Thomas More’s Island of Utopia, we discover a dystopia that has contaminated the entire planet.

The reference to Orwell’s 1984 is made crystal-clear when in front of the sanatorium is inscribed this epic date.

In Abistan you can only speak the Abilang, similar to Orwell’s Newspeak, the only authorised spoken language. The screen walls are “nadirs”, and you have to confess nine times a day to the “Mockbis”.

War commands and shut down any debate, feeding the doxa in which Yolah’s rule is universal. We also learn the Angsoc of Big Brother is destroyed by Abistan.

Boualem Sansal was born in 1949 in Algeria. An outspoken critic of the Algerian government and the president Boumedienne until his death in 1978, Boualem was often under censorship from his own country.

When his book The German Mujahid was published in 2009 and acclaimed in France and America, whereas in Algeria the novel and all his other books were banned from libraries and bookstores’ shelves.

At that time Sansal made a parallel between Islamism and Nazism, which infuriated the political class in Algeria.

In every interview and seminar the author always denounced the religious totalitarianism taking place in the Middle-East and near the Mediterranean border.

Sansal claims the Western world has thrown the Enlightenment far into oblivion, with little humanism left for intellectuals to defend what is at stake.

His philosophical stance is similar to Houellebecq’s latest novel Submission which created controversy in France after the Charlie Hebdo attacks.

Submission depicts France in 2020, ruled by an Islamic government which isn’t that bad for the French people who have turned to apathy, according to the author.

Both novels have one thing in common: the philosophical trip the authors bury the readers in, leaving resistance or submission as the last resort for survival.

The secret atheism of former Muslims

Is modesty the new commodity?