In conversation with Moazzam Begg 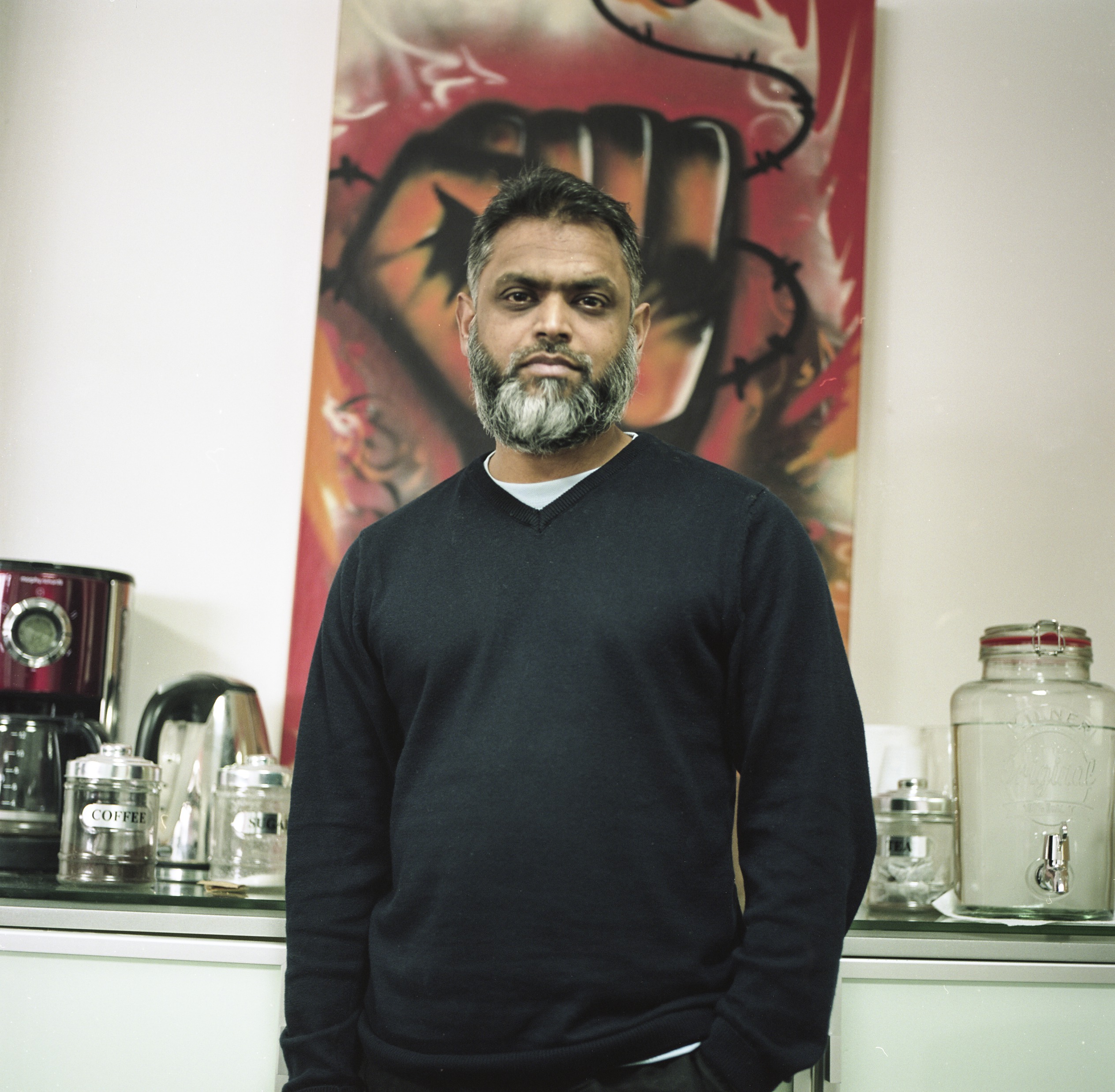 We meet in Whitechapel.

As I walk towards the office I notice that it is located opposite a mosque.

Once I’m inside I notice orange is a reoccurring decor theme, the colour signifies the orange suits Guantanamo detainees are imprisoned in. The detainee’s plight: one that Begg knows very well. He spends most of his days as the director of CAGE, an organisation that claims it exists to fight the war on terror.

I wait in the seating area of a room that resembles a small newsroom. It’s noisy like one, and everyone is talking on a phone.

After a couple minutes Moazzam Begg introduces himself. Begg is the ex-Guantanamo detainee who after his release has committed himself to a life of activism.

Begg grew up in Birmingham after his family moved there from Pakistan when he was young.

Eager to find out more about his travels, I ask him why he went to Afghanistan.

He tells me: “i worked for an aid organisation that worked out in Bosnia”.

“On my return I opened a bookstore and ran a bookstore for several years until I moved to Afghanistan in 2001 to build a school. I remained there with my family until the 9/11 attacks and the invasion of Afghanistan”.

Begg comes across as a man who knows what he wants to say with a stern look, adding to the emphasis of his views. He is sure of himself.

On September the 11th 2001, terrorists flew two planes into the World Trade Center in New York.

The tragic event came to be the largest terrorist attack on Western soil. The world was in mourning as thousands of people died.

After 9/11, President George Bush announced that the United States would be sending troops to Afghanistan and Iraq, to capture the terrorists responsible for 9/11.

In a speech Bush said “great harm has been done to us. We have suffered great loss. And in our grief and anger we have found our mission and our moment. Freedom and fear are at war.”

The most powerful countries in the world joined arms against the fight against terrorism, as it became clear that terrorism was a real threat.

America and the United States agreed to send troops to fight the Taliban, a group located in Afghanistan, which was also where Al Qaida was based.

The group who took the blame was Al Qaida (AQ) . AQ was run by Osama Bin Laden.

Bin Laden was the most wanted terrorist in the world and he claimed to be responsible for 9/11.

Begg explains to me how he became a target. He says: “Pakistan, Afghanistan and many other countries reacted by responding to the US call, which they essentially done by dropping leaflets all over Afghanistan”.

“[They] offered bounties of tens of thousands of dollars for each person that was handed over; and particularly for foreign Muslims who were living in that region”.

Bush said that “Al Qaeda is to terror what the mafia is to crime”.

Begg recalls the night he was taken into custody. He states that a group of unidentified,  [non] uniformed men knocked on his door at midnight.

He says the men “put a gun to my head [and] shackled my hands, behind my back to the back of my legs, picked me up, hooded me and carried me into the back of the vehicle”.

For Begg this was the last time he would see his family in three years.

He was detained in a secret location for three weeks in Pakistan by what Begg claims to be the Federal Bureau of Investigation (FBI), along with American and British intelligence.

They questioned him and sent him off to various detention facilities such as Kantaar, the then US facility in Afghanistan, then to Bagram and eventually to Guantanamo.

He emphasises that he was not charged and that he did not have access to a lawyer, stating that his detainment “was completely arbitrary and outside the rule of law”.

I ask him about his time in the Guantanamo. He dismisses my question as too broad. I then ask if he was tortured. Without hesitation he says “Yes”. Adamantly, he said not one person was not tortured.

“We were all stripped naked, we were beaten, we were punched, we were spat at, sworn at, we were dragged through the mud.

We were shackled naked with no clothes, violated. Nine people died in Guantanamo. Two people died in Bagram. I saw one person being beaten to death: being kicked and punched repeatedly, till he was no longer alive.”

It is 14 years since the establishment of Guantanamo, and its future is in question.

At the start of his Presidential campaign in 2008, President Obama stated that he plans to close it down.

In America the Republican Party opposes the closure of the camp.

The Office of Director of National Intelligence (ODNI) found that former Guantanamo Bay prison suspects who are fighting as militants doubled to 12 during a six-month period.

Begg states that Guantanamo has now become a symbol of everything that is wrong with the War on Terror, he says that “it’s become a recruiting sergeant for people who have a negative view towards the United States of America.

“So that’s what they’re stuck with and the majority of the prisoners as we speak in Guantanamo  have actually been cleared for release, but they can’t go back to their countries of origin because they come from Yemen.

Because Yemen is an unstable country that is the sole reason or why they are not being returned. Not because of any crime they have committed”.

“If another country was practising torture and the detention of citizens of other countries at this level: there’s no way you could get away with this”.

“If for example Guatemala did it: [and imprisoned] American, British, French, Canadian citizens from around the world or of a third world Asian country or an African country did it”.

“There’s no way they could get away with it: in-fact they would probably be invaded,” he stated.

The then Prime Minister Tony Blair stated that its aim was to prevent radicalisation.

Begg said that he did not find the UK government’s clarification between extremism and violent extremism to be efficient enough.

“Over the years the Labour government and everybody who worked with it was told that this [Prevent] is a failed policy, [and] that the Muslim community sees this as something that’s insidious, that’s spying on the community”.

In contrast the Home Secretary, Theresa May has stated that Prevent is vital to stop homegrown radicalisation.

May has previously stated: “our new Prevent strategy will challenge extremist ideology, help protect institutions from extremists and tackle the radicalisation of vulnerable people. We will not fund or work with organisations that do not subscribe to the core values of our society”.

Begg argued that famous activists such as Malcolm X, Gandhi and Nelson Mandela would be considered radicals.

He says “that they would not be allowed to address our universities today because each of them would be regarded as either a terrorist or a radical or an extremist”.

Begg has, what some would consider, controversial views regarding the Taliban.

I ask him about a statement he made in a book titled Enemy Combatants. He says, “the Taliban were better than anything”.

Straight away he dismisses the assumption that he supports the terror group.

He states that “with anything that’s a statement, you have to know what has been said before and after”.

“In my view were the Taliban were better than the warring tribes that existed in Afghanistan prior to that. Then the answer is, yes”.

Before the Taliban the Mujahideen were present. The Mujahideen originally formed to fight against the Soviet Russia, to prevent an invasion.

Whereas, the Taliban are a terror group which formed after 9/11.

In the last week the New York Times reported that the Taliban carried out an attack on Government sites.

In 2014 Begg was arrested for allegedly funding terrorism in Syria, after he made a trip to the country.

Begg was accused of holding documents that showcased the accusation.

Transfers made from the Habib AG Zurich back to Moazzam Begg were revealed.

However, Begg denied all the charges and they were later dropped due to insufficient evidence.

Begg has been touring several universities and has been giving talks to students across the UK on his “students not suspects tour”.

Many educators have come to support various universities implementation of free speech after several speaker’s events have been cancelled or even boycotted.

Examples include Cardiff University creating a petition to stop feminist scholar Germaine Greer visiting their campus, and Katie Hopkins who witnessed students walking out, in mass, on a talk she gave at Brunel University.

Begg continuted that “universities are places where people go to open their minds [and] to think about what is happening in the world”.

“Universities have traditionally been places of activism. In anybody’s life the most active [they are] is at the time they [are the] most idealistic and that is at university”.

“The Prevent strategy is now whether by design or by accident bringing in a Big Brother vision of how to deal with education”.

Earlier this year the Daily Mail said that Begg was hindering the government from tackling extremism.

The paper argued that the CAGE director was enticing radical views.

Begg hit back stating “I really don’t take much note of these right wing rags that have a history of fermenting hatred towards foreigners – refugees in particular”.

“If my crime is speaking out against crimes that people recognise are insidious, if my crime is that I’m calling for accountability after I’ve suffered torture, after I’ve been detained, after I’ve been abused and kidnapped and nobody’s been held to account for, then if that’s unpalatable: then they can take their newspaper and shove it where the sun don’t shine”.

He goes on to say that he does not know any Muslim in this country who has not been accused on having some kind of extremist link.

He used Baronees Sayeeda Warsi as an example, stating that The Telegraph accused Warsi of extremist links.

Begg addressed his views on Theresa May, saying “what she doesn’t recognise is that she’s part of the problem”.

“In terms of introducing the notion that being anti muslim is okay and surprisingly or unsurprisingly last year [at] the Islamic human rights commission Islamophobia awards she won Islamaphobe of the year”.

In recent months CAGE has leaked counter terrorism documents that show the training methods the Government provides to its employees.

The company states,”our mission is to highlight and campaign against state policies developed as part of the War on Terror”.

Begg says: “We’re trying to introduce the voice of reason where people have gone mad, we are and have been at the far end of initially talking about holding security services to account for their excesses on the war on terror that means complicity, torture, rendition, kidnap and abuse”.

“Closer to home we’ve been pointing at these corrosive measures [and] have made Britain one of the most draconian countries in the world in terms of its laws”.

He goes on to say that the Britain is an extremely beautiful country to live in but its laws target Muslims, “it’s becoming a police state for a certain part of a community”.

It is clear that Begg disagrees with the legal methods the Government uses to tackle terrorism, he adds “you can be detained at an airport or port of entry and exit into a country and held up to nine hours without any legal representative without any charge, without any suspicion”.

In the UK and individual can be held under custody for 14 days; if they are arrested under the Terrorism Act.

In conversation with | Edmund Clark

In conversation with Moazzam Begg