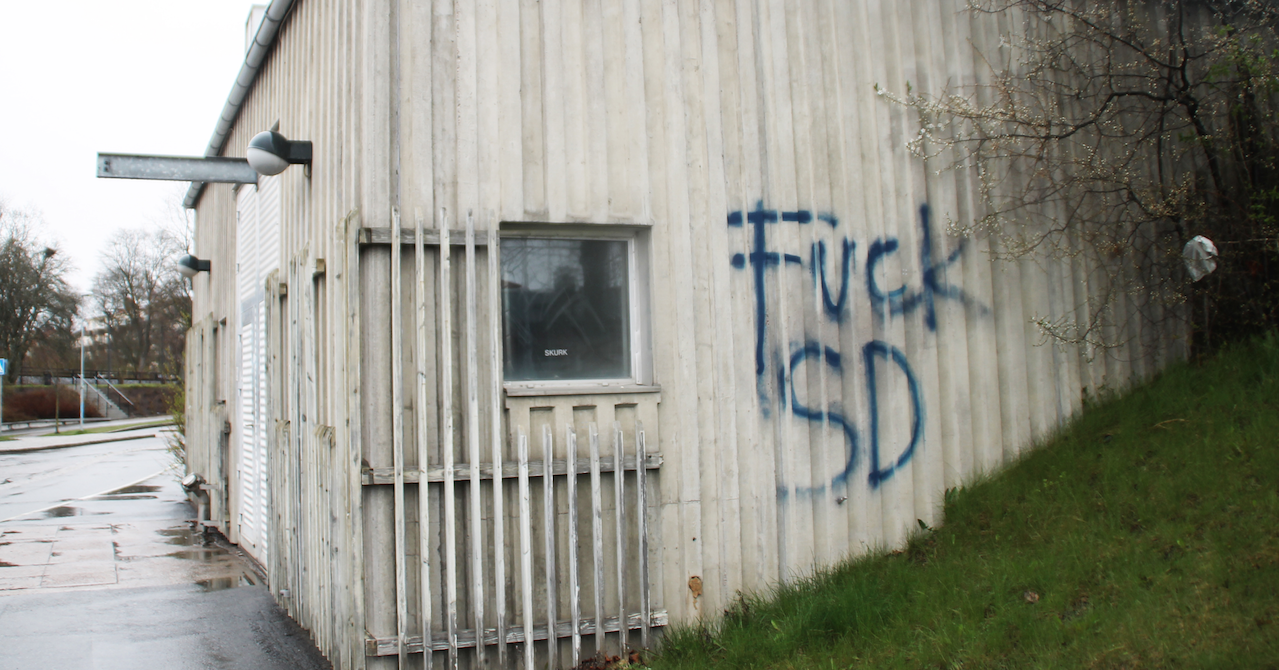 Muhammad was refused help when he came to A&E. Although he was bleeding heavily from the cuts in his arms, they wanted to see his papers first.

Fatima was walking on the street in broad daylight when a group of people started shouting racist comments after her.

Mustafa and Parisa went off the radar after their asylum applications were rejected as they had nothing to go back to in Somalia.

These examples are just a few, but it’s the reality in Sweden. Hardline attitudes are becoming common and the far-right has grown since the influx of immigrants to the Scandinavian country, drastically increasing in correlation with the continuing refugee crisis.

The Sweden Democrats (SD), a nationalist party that emerged from the neo-Nazi movement, is now the country’s third largest party with 48 out of 349 representatives in parliament.

José Nazar Toro came to Sweden as a refugee in January 1975 from Chile, he doesn’t consider the Far Right to be a new phenomenon: “This is nothing new, when we came to Sweden people were accusing us of taking the jobs and the girls. Even by then, many people hated us,” he says.

“As of late the racism has drastically increased in the whole of Europe. The parties representing these spiteful ideologies are getting stronger, something we’ve seen during the latest mass inflow of immigrants. We live in a dark period of time” he adds.

Anti-fascist groups have warned that, following Islamic State terror attacks and the refugee crisis, the far-right is rapidly gaining political legitimacy across Europe through the success of parties such as SD, Austria’s Freedom Party, the Finns Party in Finland, France’s Front National and the UK Independence Party. 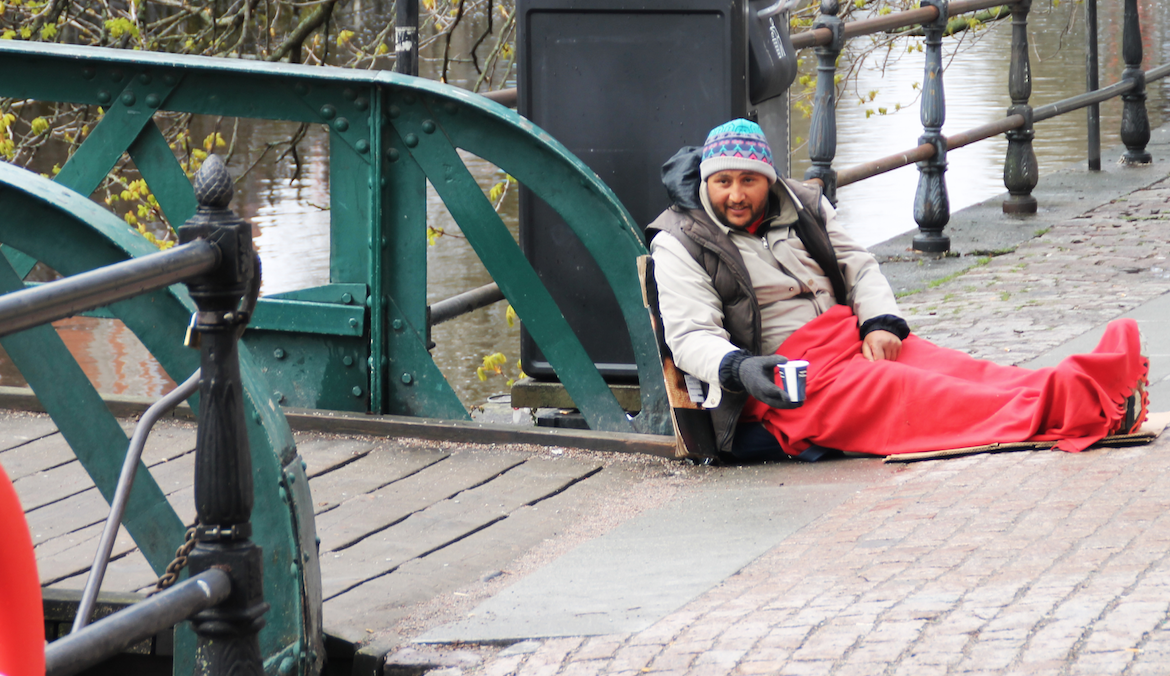 A refugee begging for change in Stockholm.

It all escalated in Sweden after the migrant sexual assaults in Cologne and Stockholm. On New Year’s Eve, about 80 women reported being sexually harassed at the German city’s central railway station.

Days after the attacks in Germany were revealed, there were many reports coming from Sweden about attacks of a similar kind, all of which have been covered up by the police.

For two years, a male gang of immigrants continuously assaulted girls as young as 11 years-old at Europe’s largest youth festival in Sweden, We are Sthlm. The information never reached the general public, as a result of the worry of how this story would play in the hands of the Sweden Democrats.

This sparked outrage among people, and especially infuriated the far-right parts of Swedish society. Shortly after, a demonstration against refugees took place in central Stockholm.

In addition, there are continuous reports coming from accommodation centres for refugees about fires and attacks. It all reminds Sweden and the world of the worst elements of European history.

“As of late the racism has drastically increased in the whole of Europe. The parties representing these spiteful ideologies are getting stronger, something we’ve seen during the latest mass inflow of immigrants. We live in a dark period of time”

The reason behind SD’s popularity may seem unclear but student Elin Holmgren and doctor Maria Ernudd are on the same track. “SD’s increase in popularity is a result of a fear of change and lack of knowledge,” says Holmgren.

“The party has caught a worry about the unknown. Everyone wants to stay in a native Sweden where we’re all blonde and blue-eyed, but our society doesn’t look like that anymore,” Ernudd argues.

Sweden has a population of less than 10 million. Last year, when huge numbers of refugees and migrants crossed the Mediterranean in the search for a better life, Sweden took in over 160,000 asylum seekers, double the amount compared to previous year.

Sweden has taken more refugees per capita than any other European country and was the continent’s first to offer permanent citizenship to refugees from Syria.

However, the Swedish government also recently announced its plans to deport 80,000 immigrants. Strict border controls have been imposed and IDs are checked frequently as a way to decrease the inflow of asylum seekers.

Over the next five years, the government expects the costs for migration and integration to be at a total of 336 billion SEK (£29 billion). One may wonder if Sweden’s taken on too much?

I spoke to Patrik Bálint, co-founder of Mipaza which runs homes for unaccompanied refugee children in Stockholm, and Solveig Backlund, a nurse at a centre for asylum seekers, and they shine light on a growing frustration.

“The attacks on immigrants have escalated. I’ve never heard about refugee camps being set on fire before. The insecurity is only going to increase”, says Bálint.

“The kids don’t understand why SD have those opinions. Many come to Sweden with an image of them being able to work, earn money and send it back home. This is impossible in Sweden.

“They have worked in a brick factory in Iran since the age of 11, their families have paid around $20,000 for them to come to Sweden and here they are told that they can only start working after going to school for x number of years. They simply cannot understand that,” he adds.

The attacks on immigrants have escalated. I’ve never heard about refugee camps being set on fire before. The insecurity is only going to increase.

Bálint talks about a Sweden with a lack of resources as the number of immigrants drastically increased by the end of last year. There are no alternatives today, which means everyone can start running homes with no regulation.

The capitalists in Sweden are using the situation to make money. Backlund also talks about the same frustration. “It has been chaos, a real misery. Sweden has room for everyone, but we’re falling behind on planning”, she says.

Locating and placing asylum seekers in Sweden has turned out to be a challenge, and a lot of the times, people have started to build up their new lives here when they are forced to move.

Backlund shows me a picture of her 15 year old ‘adoptive son’ from Afghanistan. He had been in therapy with her for a long time when he got relocated to another city.

“After everything he’s been through, after not having anyone, when he finally started to feel safe in his new home, they cut him off from the little connections he had made here. He needs to know that someone cares about him”.

Backlund and Bálint are two examples of people going against the mainstream, they have built incredible relationships with the refugees in Sweden and get a majority of them back on track after a life-changing journey where many of them are raped and tortured.

They are the opposite of the growing far-right societies in Sweden and Europe as a whole. Of the five interviewees they all, apart from Nazar Toro, consider the far-right increase in Sweden as a temporary phenomenon.

The other political parties in Sweden have drastically changed their migration politics in order to attract voters from SD. Looking back on history, racism has always been present in the society, but a racist Sweden is not the Sweden the world knows.

Muhammad, Fatima, Mustafa and Parisa travelled for eight months to get to Sweden.

Fatima and Parisa got contraceptive injections as it was expected that they would be raped on the way, they were tortured In Eritrea and beaten up by the European population and the police in some countries, while some of their siblings died on their crossing in overcrowded boats.

When they arrive, they are being told in various ways that they aren’t welcome. It’s as if the Swedish people are afraid. The latest attacks on immigrants are inhuman and don’t belong in a peaceful country.

The future lies in the hands of the Swedish voters.

All images by Alice Grahns