For most of October 2016, a massive, steel and aluminium sculpture of two figures suspended in a cube, loomed over New Bond Street in Mayfair

Lorenzo Quinn is the world’s leading figurative sculptor, whose works can be found all around central London and the rest of the UK; Would You Catch Me If I Fall? and Vroom Vroom can be seen in Park Lane, Force of Nature II in Berkeley Square and The Tree of Life in St Martin’s Church, Birmingham.

Amongst others, in Qatar, Rise Through Education, in St Petersburg, Leap of Faith and in Mumbai, Hand of God.

Lorenzo Quinn was the latest exhibition of the artist’s recent works, even though some of the pieces still remain in the gallery after the end of the official event in October.

The exhibition showed many sides of Quinn’s artwork and process; it started with his earlier work that was focused more on classic figurative forms and then progressively switched to his larger and more experimental work with bronze and stone.

It demonstrated Quinn’s ability to work with many different materials and to different scales and showed us why he is a leading figurative sculptor.

This show was expected to be, as Halcyon Gallery noted in their annotation of the exhibition, “an impressive culmination of the artist’s legacy which also hints at his future trajectory.”

The highlight of the evening was the unveiling of the sculpture Balancing our Worlds, which is Quinn’s newest interpretation of relationships between women and men, executed in bronze and steel.

A woman holding a spherical world and a man holding a cube world in his hand trying to balance while holding onto each other’s hands.

Quinn explained: “The man is a cube, with a lot of hard edges. He is quite basic and doesn’t need much handling. But the woman is smooth and round; you can’t just leave her on the table without any attention, otherwise she’ll just roll off.”

He explained how he wanted to represent finding compromises and balance in a relationship between the two opposite worlds of man and woman. He gave a ‘catchphrase’ to the sculpture: “If you let go we will both fall”. 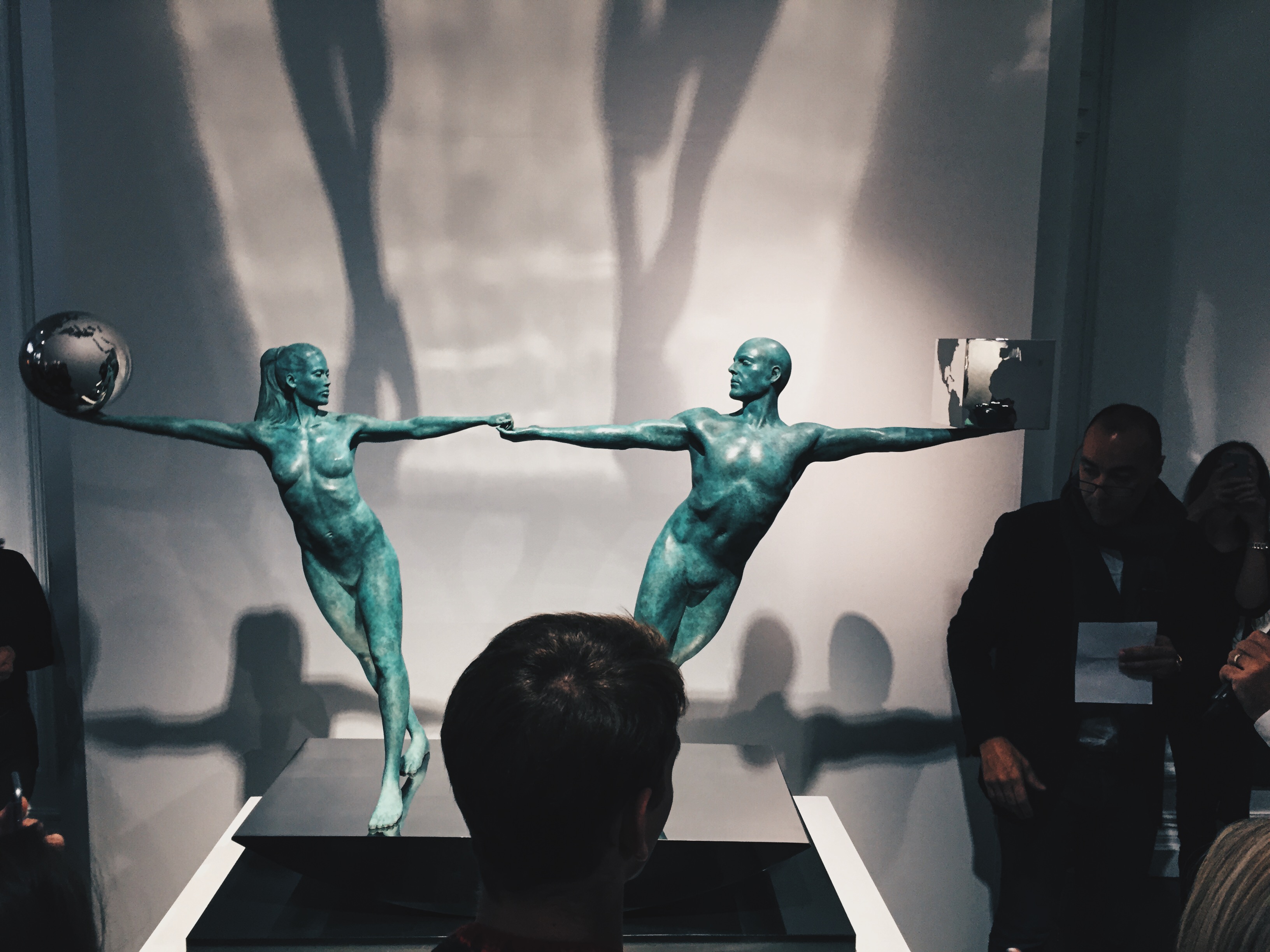 His uniqueness is in his precise representations of hands and human bodies.

We see this in Give and Take III, Two Worlds, and the most iconic Love sculptures. Quinn says: “The hand holds so much power; the power to love, to hate, to create, to destroy.”

The Love sculpture shows hands holding tight to one another in a perfect balance.

Quinn is adept at representing in bronze a sense of strong force.

His use of materials is key. In Four Loves the artist portrays a couple balancing on an aluminium world made out of puzzles, which lays on four stones.

The first stone, made out of polished bronze, represents faith and affection.

The second red stone represents passion and love. The third stands for friendship, which is executed in stainless steel.

And the last wooden stone finishes the composition with a representation of love.

Quinn believes it’s very important for an artist to find his own niche and identity.

“It’s very difficult to be recognisable. But for example, nobody can make an overweight person without somebody saying it’s Fernando Botero. This is a good example how one achieves an identity,” said the artist.

In Quinn’s art, the representation of balance and love through hands and human bodies is his iconic signature.

The uniqueness of Quinn’s artwork is in its simplicity. The perfect example of how simplicity is effective in Quinn’s art is the sculpture What goes around comes around. The sculpture shows a man’s hand, which extends in a round shape to touch the man’s own back.

It is, as the artist says, a representation of a reflection of all our good or bad deeds: “Everything that person does will come back to haunt or save him.”

Every Quinn sculpture has a message behind it.

“It’s important to have a conversation”, said Quinn during our brief interview.

Quinn believes that in order to create great art it is important to study traditional fine art first: “If you skip how to draw a proper human figure, this will limit your ability to freely create what you want. If you don’t have ability; you are stuck. Art is very subjective, but without a proper schooling your creativity is bound.”

He has always been inspired by great old masters such as Michelangelo, Bernini and Rodin, whose mastery is particularly distinctive. We see this traditional influence in most of his sculptures.

Quinn also mentioned his concern for young artists today and the manner that many skip traditional training: “There’re no shortcuts,” he said.

“One thing I want to say to young artists is that they shouldn’t take shortcuts. It’s important to study because the more you know the easier it is to be free with your creativity.”

The artist thinks that young students tend to go to abstract art or minimalist art because in some way, it might seem easier but it’s not.

Quinn gave an example: “Mondrian might seem very abstract and minimalist at times with his work but if you study where he came from he did proper schooling of art and then he developed from there. He minimised what he did. But it was based on something real, it was based on a knowledge.”

Tradition permeates through Quinn’s sculptures so that on the surface, they may seem simple in form and contemporary.

He creates sculptures inspired by meaningful quotes, poetry and moments in life.

We see this in his work Chess Set. The artist was inspired by the time spent with his father during his early years.

“I used to spend hours playing chess with my father, and slowly through the years I started getting better, and eventually I started to win. At that point I noticed how he immediately took it personally and saw himself getting old and frail, because he was not able to beat his son anymore.

“For me, it is a game in which the importance of time is relative. I wish we could learn how to live our lives in the same way as we play chess,” he said.

“Inspiration is everywhere, from someone you meet to a conversation you have and to a movie you’ve seen. Life in general is inspirational. If you tell me, for example, that you don’t know which way to go and you are facing a hardship of decision, this will spark an image in my mind – and I’ll say let me see how I can materialise that.”

The success of Quinn’s art is tremendous.

His earliest works, a Tree of Life created in 1993 for the United Nations and St. Anthony made for the Vatican in 1994 in honour of the 800th anniversary of St. Anthony, which he created when he was just 23, have become iconic.

In his art Lorenzo Quinn manages to embody universal issues into simple and elegant silhouettes, which are at the same time complex in their execution.

This style distinguishes his works amongst others, making the art relatable and appealing to many of us.

Even though the exhibition was held for a relatively short period of time and finished last month, some of Lorenzo Quinn’s works will still remain in the gallery for further display and are definitely worth seeing.

All images by Adelina Shaydullina.