Haircuts for the homeless

There’s been a steady stream of customers waiting patiently in line for most of the day. But he hasn’t made any money – all of his haircuts have been for free. He’s not working out of salon either.

There are no sinks, no plugs, no magazines to browse through while you wait or complimentary cups of coffee.

For one day his barbershop has been Victoria Square in Athens, a makeshift home to hundreds of the 5,000 refugees living in the city who are caught up in one of the biggest humanitarian crisis of our lifetime. 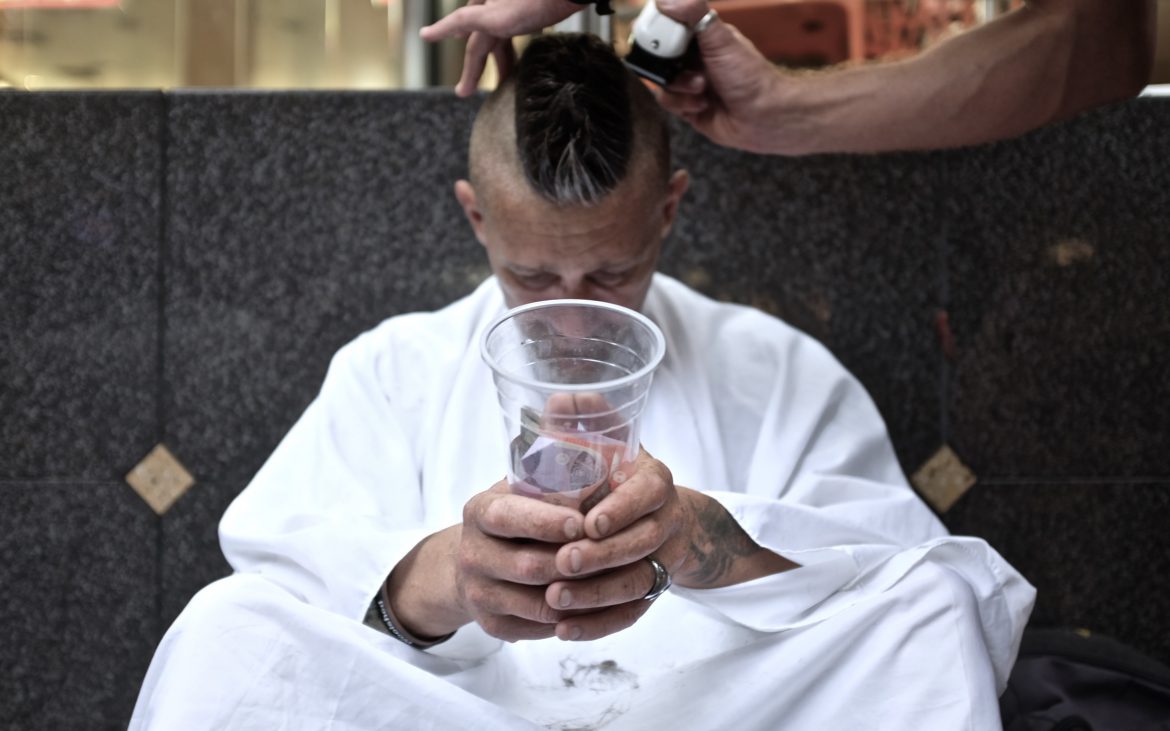 Street Salon: A homeless person having a haircut [Matt Spraklen]

Rewind to one year ago. Josh, then working at a salon in Exeter, cut the hair of a homeless man he knew on the streets of the city one day after work.

“It was this guy who was the same age as me,” says 29-year-old Josh. “He’s actually someone who had a fierce heroin addiction and I saw him really high and really low sometimes. I had my hairdressing gear on me one time and he was in a really great mood and I was like, “let’s give you a haircut.”

With a backpack full with scissors, mirrors, clippers and hair gel, Josh hit the streets giving free haircuts to those sleeping rough at night around South West England.

[pullquote align=”right”]“It’s about bringing people who feel invisible in society back into the light”[/pullquote]Posting before and after pictures of his handiwork on social media, Josh set up a campaign called #dosomethingfornothing along with Matt Spracklen and Dave Burt.

The campaign, aiming to inspire people to help those in need, quickly gathered pace – the campaign’s official Instagram account now has over 55,000 followers.

Having taken his skills to the streets helping homeless people get “dignity” back into their lives, Josh then shifted his focus to those sleeping rough in London.

“I’ve always been quite open to talk to most people anyway so that wasn’t a problem, but I wanted to do more than just give them a bit of pocket change, more than just a “hello” and “goodbye,” says Josh. 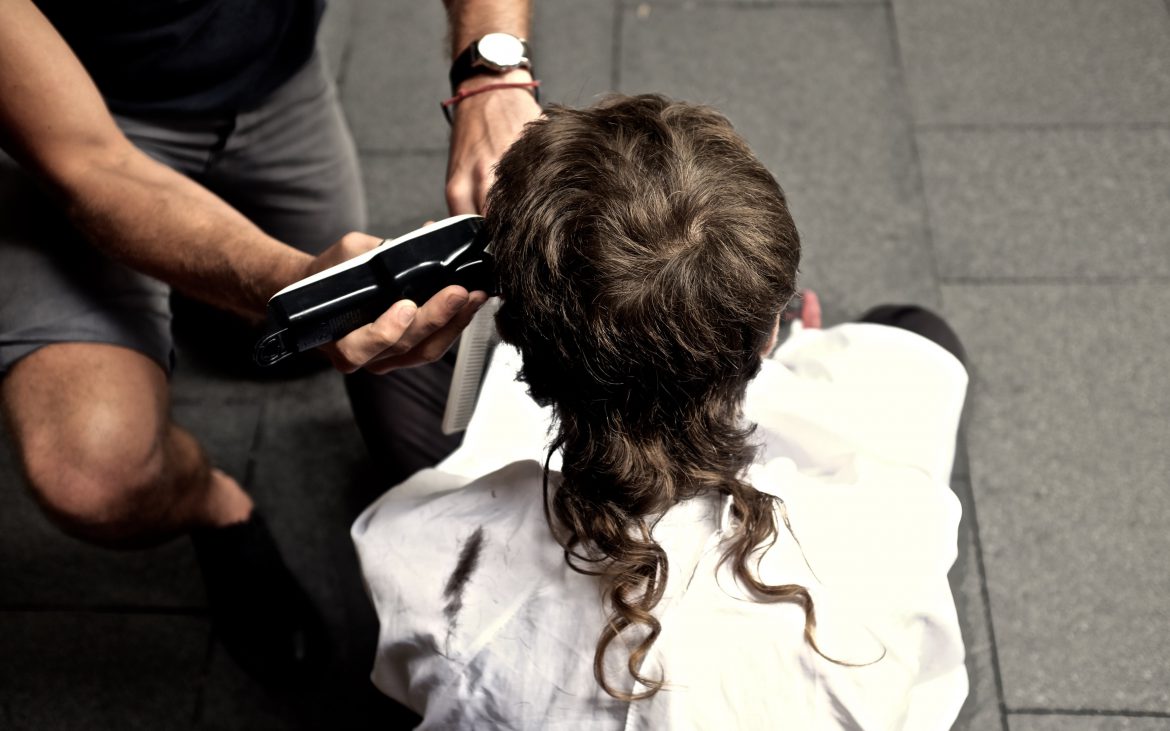 Having trained as a hairdresser five years ago, Josh emphasises the ability to have a connection with someone in a vulnerable situation during a haircut.

“When I started hairdressing,” Josh says “I think I really realised quite soon how important the human connection you have with the person in front of you is. You play quite an important role as a hairdresser, not only to make someone look good but also to make them feel good.”

With more than 8,000 people a year sleeping rough on the streets of London, many homeless people struggle with addiction including drug abuse and alcoholism.

“That’s why we’re trying to bring it down to one person and go beyond the addiction and go beyond whatever’s happened to them in life, because you never know when you’re going to be there yourself,” says Josh.

In May, a group of 500 campaign supporters gathered in London, helping those who are homeless by reinforcing the message of “raising compassion.” 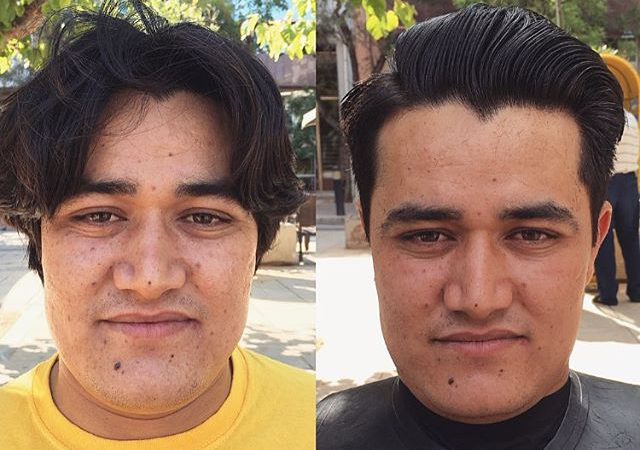 Before and after: Waheed gets a haircut [Josh Coombes]

Over the summer Josh continued to give free haircuts to the homeless, before visiting Greece in September where currently 57,000 refugees are stranded.

In Victoria Square, his first customer of the day was Waheed, a man from Afghanistan.

He fled the Taliban with his pregnant wife and is now in Greece hoping to start his own business. “He was actually one of the first people [I saw]. 45 minutes later he’s running off to show his wife because he looks like Elvis Presley,” says Josh. 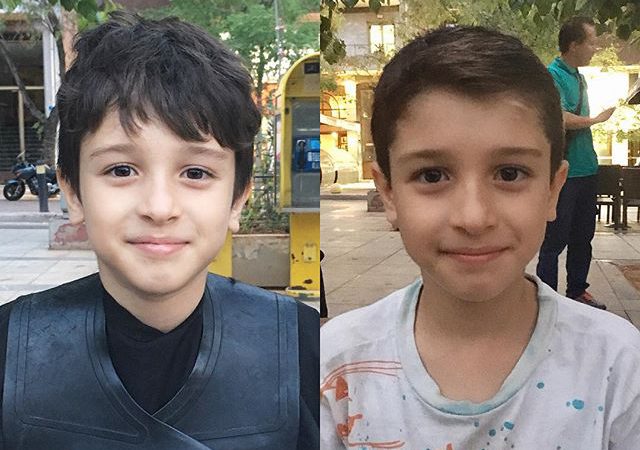 Ready for School: Ali gets a haircut [Josh Coombes]

Josh also cut the hair of Ali, a 10-year-old Afghan boy, just before his first day of school.

“It was him and his family that meant a lot actually. It was because I spent time with him, I cut his hair, then his dad’s hair and his uncle’s hair.”

Victoria Square has a notorious reputation.

At night, vulnerable young refugees desperate to get to mainland Europe are becoming victims of prostitution and the drugs trade.

Around eight miles south of the square lays the Elliniko camp where an airport, once used for sports centres in the 2004 Olympics, now houses around 3,000 refugees.

The conditions in the camp have been so poor at times that it has been difficult to get aid to those living there.

“I was working with people who were in different situations there, some people are homeless but there’s a lot of refugees who are in limbo,” says Josh.

Now back in London, Josh hopes to see a multi-city launch for the campaign. “We’re trying to look at a new way of doing it to inspire the people who are compassionate and who want to do something, but are not quite sure how. You don’t have to be part of an organisation. You don’t have to be part of having to deal with bureaucracy and the red tape that’s sometimes involved in just doing a nice act for someone”.

“I understand completely that this isn’t a normal experience for anyone every day. People might think well, how can I do it? Maybe I’m scared to approach somebody or I’m quite intimidated because it’s all about being scared of the unknown. What I’d say primarily is just give your time.”

When asked about the difficulties in dealing with homeless people who have addictions, Josh says: “I just feel like you’ve got to look at humans in the same light; it’s about letting your empathy stretch further than someone’s addiction”.