Whitework: Collaboration between art and science

With all the drama that comes with cancer and the ups and downs of keeping up with new findings on cures, it is understandable why many people facing cancer want to escape from it all and express themselves through music and art.

Artists Denise Wyllie and Clare O’Hagan have been investigating the effects of utilising art therapy among cancer survivors and their book, Whitework, has given them a medium to do so.

Whitework was created as a way for people with or without cancer to develop “a strategy to manage stress from cancer and challenging issues through mindful creative craft making.”

The artists also define it as a great remedy for the directness of a hospital environment with a hundred images and a fantastic read.

With more than 2.5 million people diagnosed with cancer in the UK and the figures set to rise to 2.9 million by 2020 and four million by 2030, it’s no wonder more communities are searching for calming outlets to strengthen the idea that living as a cancer survivor doesn’t have to feel like eternal damnation.

With rave reviews from the likes of Jane Ray, the artistic director of The Whicker’s World Foundation, commending it for transforming her negative views of the disease and associating it with hope and thoughtfulness, it is safe to say this piece of work does exactly what it says on the tin.

The book is a visual log of the project that involved many people, families, friends, old, young and more.

The project consisted of a 30 metre-long and 1½ metre-wide white banner that had invisible ink etched onto it. The ink transcribes different scientific data and microarrays that represented the current findings on DNA’s role in cancer.

Wyllie and O’Hagan decided that DNA research would be the focal point for their project as it juxtaposed nicely with the structure of the banner in terms of many threads intertwining to create one larger concept, which is exactly how DNA works and makes us who we are.

The invisible ink was specially made for the project with trailblazing technological advances, which superbly contrasts the idea of using traditional textiles as the body of work.

The ink appears when sunlight goes through the banner but O’Hagan hinted that the magic definitely happens when it is night and all the scientific information gives off a luminous glow as if the piece has come to life. 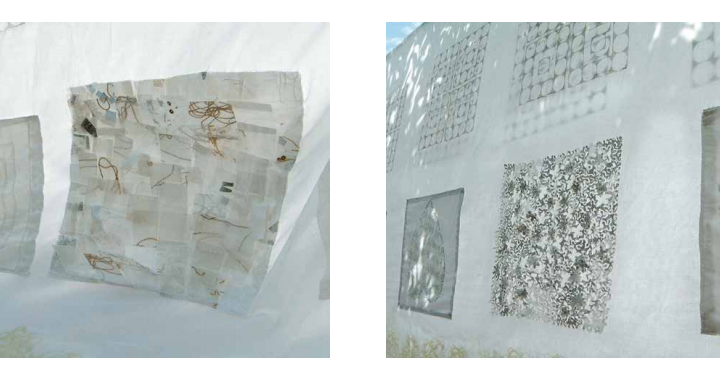 Some of the pieces from Whitework [Denise Wyllie & Claire O’Hagan]

With an innovative banner as a strong foundation to the project, the duo also incorporated the personal creations of each participant that was involved in the project.

The creations were 30cm squares that every individual used to forge their own designs using only materials that were available to them.

This meant that each piece was unique, much like a snowflake.

Speaking of snowflakes, Whitework was made by just using white materials; hence the name.

The aim of the project was to create a calming escape and mind-easing retreat and that the colour white connotes exactly what they were aiming for.

It also allowed everyone to be more creative and inventive in expressing his or her vision through texture only, thus creating a more three-dimensional piece.

Wyllie also explained how the fact that the 30cm size was convenient for many people who were busy during the process.

Many women dealing with cancer would take out their square during hospital visits and work on it in the middle of the waiting room thus making the pieces more special to both Wyllie and O’Hagan because it was made with tenderness.

Although the book was published in 2016, the process actually spanned from 2004 through to 2008. It initially began when the authors were invited to the workplace of their friend Professor John Hartley who was the leader of the Drug DNA Interactions Group for Cancer Research UK.

Psychosocial oncology is a form of cancer care that focuses on the emotional and mental health of the patient as to prevent stress and depression, which is one of many factors that can worsen the effects of cancer.

After their involvement with the group they then proceeded to have a two-year art/science residency at University College London and worked closely with scientists and clinicians to create “Transformations in Science and Art”, which was the design that Whitework expanded on.

Whitework has also been internationally appreciated, with a digitally re-mastered version, called “the landmark DNA banner”, set in the Royal Mint and exhibitions at the Royal Academy of Fine Arts and Architecture in Copenhagen, De Ploeg Galerie in Groningen and Greenbelt music festival in the UK.

It has connected various countries sharing one common cause – the fight against cancer; “the most important part of creating this huge artwork was interacting with all the participants”.

They wanted this project to normalise cancer and to downplay the drama that comes with being diagnosed as it wouldn’t help anyone, and approaching the illness with positivity will allow you to live life to the fullest.

One of the many stories they recall during the process was getting together with the North London Deaf Children Society to create numerous squares.

Wyllie laughed as she explained that the children were so passionate and excited by getting stuck in that they were not aware of how loud they were being, “because they were hearing-impaired they didn’t know their volume but the energy was invigorating”.

O’Hagan remembered working with a group of elderly Afro-Caribbean women and the conversations they had; “we weren’t talking about cancer, we were having fun. We had a great time. The ladies were talking about the Mighty Sparrow, the Calypso singer and how hot he was. They were young at heart.” 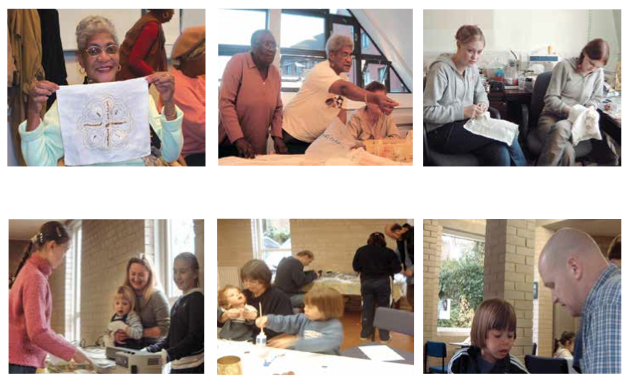 Another person they appreciated was Jaap Wortel, a visually-impaired Dutchman who created a message with braille for his contribution.

The braille stated; “Hello, I’m Jaap. I’m blind and I think that cancer is a rotten disease. Particularly if you’re young – it’s very difficult. I wish you lots of love and strength”. Although a simple message, it meant a lot to them.

Whitework is an original piece that strives to focus on the good side of living with cancer when so many focus on the bad.

It has also received a great deal of support from so many different types of people, acting as an effective gateway for cancer survivors and anyone struggling with an issue to find a sense of calmness and comfort.

Denise Wyllie and Clare O’Hagan describe themselves as an Anglo-Irish partnership who have been working in unison since 2001.

They consider themselves as activists as well as artists and express their views wholeheartedly through their work.

They also wish to work on future endeavours similar to this project.

If you are interested in purchasing the book, Whitework – A Gentle Path, you can do so through their website www.wyllieohagan.com. 20% of all profits will go towards cancer communities, nursing, hospices and further designs and ventures.

ASMR: Why do strange sounds feel so good?

By Jiaqi Zheng
1 Mins read
Join us as neuroscientist Paul McGeoch and ASMR content creator Rita to discover the the magic that ASMR perform in our brains.
Technology

By Alexandra Andronache
6 Mins read
With AI imaging improving over the last few years, the question has also arisen about how it will affect real art and artists.
Health

By Rella Jefferies
5 Mins read
Processing traumatic memories using medication is no longer an idea restricted to the realm of science fiction.