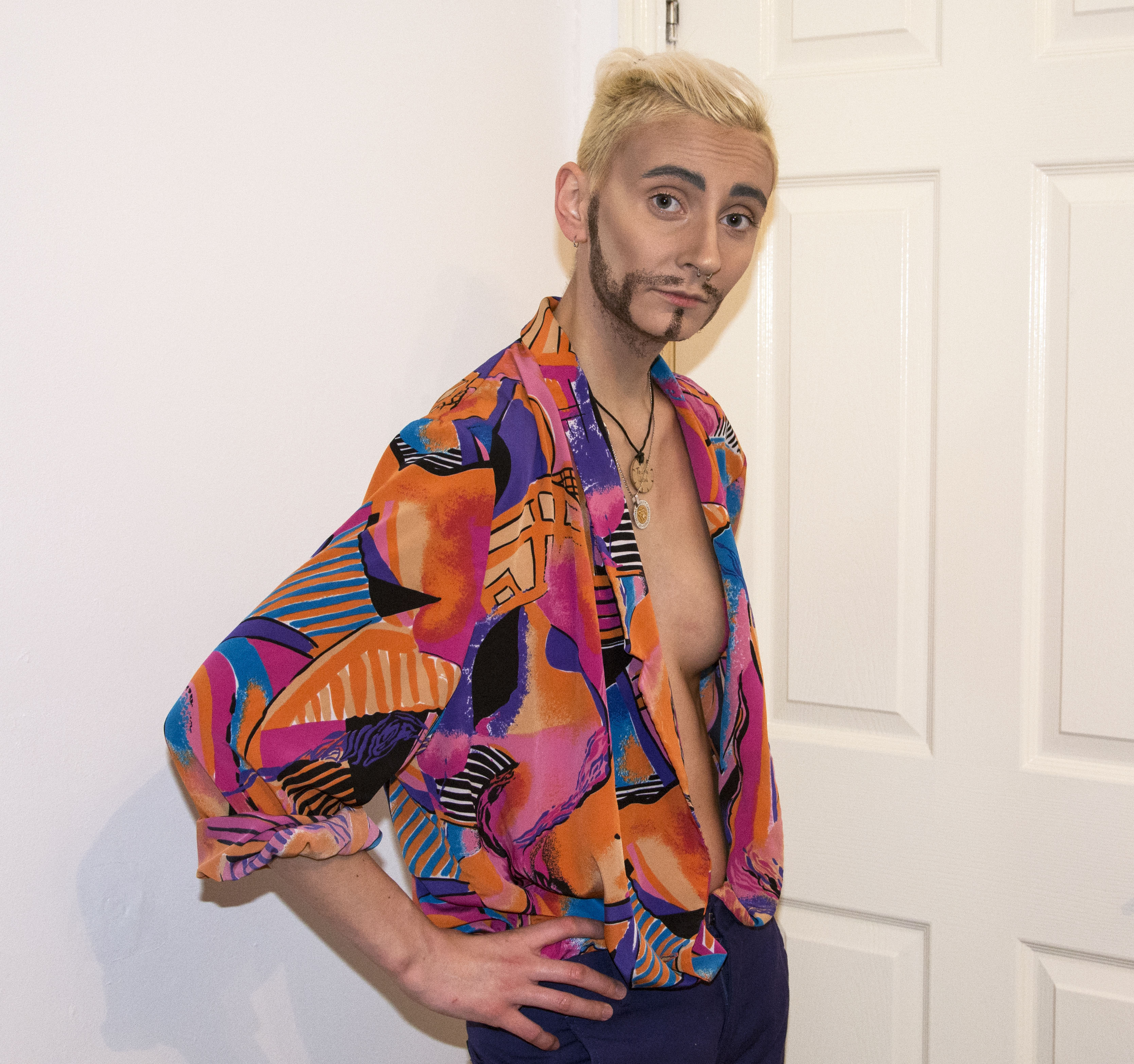 “It is not always a woman dressed as a man – being a Drag King doesn’t define your sexual orientation. I know plenty of Drag Kings who are straight, bisexual, pansexual – no sexual.”

Perhaps I should have suggested the Royal Vauxhall Tavern (RVT) or maybe, She Soho on London’s Old Compton Street – locations known for their iconic ‘LGBTQ+ cabaret, performance and club nights’ – for our interview, I thought, shrugging off the idea as we made our way towards East Ham High street, Newham, in search of our destination – Costa Coffee.

While arriving late to interview someone made for terrible journalistic etiquette, arriving early was equally unacceptable, so we stopped, got a drink and waited for another 20 minutes to pass, “I can not believe there is a Drag King living in East Ham,” Daisy stated, to which I nodded and replied something along the lines of: “Yeah, right on your doorstep.”

Daisy was not just my photographer for the evening, she was also my guide. She knew East Ham like the back of her hand, after all, she had spent her life weaving in and out of the streets that would soon lead us to our final destination, the home of Drag King: Benjamin Butch.

The first time I saw Benjamin, or Ben, as I sometimes refer to him, was on the television. Sat across from ITV This Morning hosts Ruth Langsford and Eamonn Holmes, alongside fellow Kings – the abbreviated term for Drag Kings – Frankie Sinatra and Adam All, viewers were given the opportunity to ‘Meet the Drag Kings’! Intrigued by the interview, I continued to watch.

“Why is being butch so negative?”

The second time I met Ben however, it was I who was sat across from him, me taking the sofa and him, the floor, in the neatly decorated living room of the East London flat he shares with fiancé, Billie Butch, both 22, who also does drag. They have been living there for five months and so far, it is “my favourite house I have lived in” since moving to London three years ago, Benjamin told me.

Crossed legged, make-up free and hair up in a topknot, Benjamin at home was not as “flamboyant” as the Benjamin I had watched perform on stage, via YouTube, in “not stereotypical, masculine attire” of skirts, glittery boob tubes and shirts influenced by Sir Mick Jagger’s style. 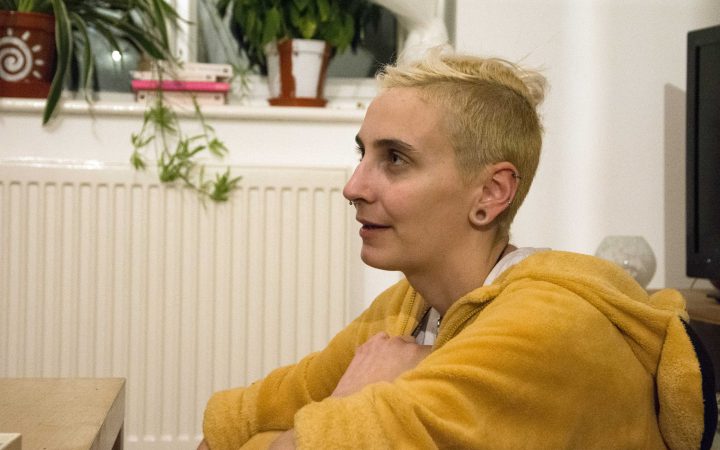 Then again, the slim built, politely spoken, “feminine” King who sat in from of me, wearing a yellow Lion King onesie was also a far cry from the man his name insinuates, especially given that name is ‘Benjamin Butch’.

“When I was growing up, I was always referred to as Butch and it was always a negative word associated with me like ‘Oh, you are actually so butch’, instead of, ‘Oh, you are really butch'”, he explained.

No longer wanting the phrase ‘butch’ to be seen as a negative, Benjamin, who is non-binary, spun the term into a positive by asking a simple question: ‘What is butch?’

I was introduced to the world of Drag Kings by a Buzzfeed video in 2015, but the whole subculture of Drag Kings remains relatively unknown in the mainstream media.

While Benjamin “gets that a lot” – people having heard of a Drag Queen but not a Drag King – the history of Drag Kings can be dated back as far as the 1850s when pioneering figures such as Vesta Tilley became one of the first male impersonators to earn prominence in Britain as well as America for his performances.

“The way he moves on stage and dances is amazing”

A little later on, it was Drag Kings such as Hetty King, Diane Torr and the ‘Grandaddy of Drag Kings’, Shelly Mars, whose performances would form part of Drag King history.

But today, while the “very small community” of Drag Kings continues to grow, there is still “so much more to Drag Kings than what is seen from the outside”.

The perception that only women can be Drag Kings and men, Drag Queens, is an aspect of the drag world Benjamin finds frustrating.

“Being a Drag King is not necessarily the opposite of a Drag Queen, a Drag King is someone who performs masculinity on stage and expresses themselves in whatever format. A lot of people would refer to a Drag King as a woman dressed as a man, performing as a man, but it is so much more than that,” he explains. 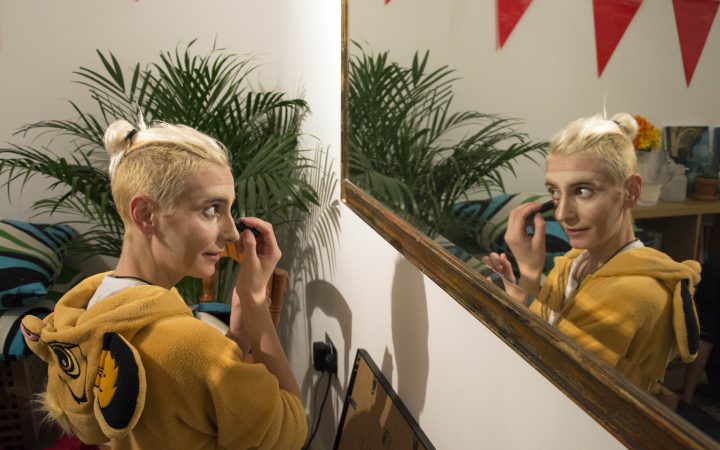 Benjamin starts the process of preparing for a show

Having trained as a dancer growing up and studied Urban Dance at university, deciding to become a Drag King last year was a decision that “helped me understand who I am… before drag, I was a lost soul.”

Since learning of the world of Drag Kings from a friend at university, a few online searches later and Benjamin knew: “I was going to be a Drag King, so I googled Drag King nights in London and Man Up, at The Glory, the best gay pub in the country according to Attitude, was on. I was like: OK, I am going to go for that, so I did. It was fabulous.”

Since making it to the Semi-Finals of Man Up and winning King of the Fringe in May 2016, Benjamin has also achieved other successes since becoming a King last year.

From performing at Bar Wotever at the RVT, every Tuesday and starting up Butch Boiz: “A company of seven Drag Kings. I made it so all seven Drag Kings could come together and promote drag and our own events.”

The life of a Drag King who “talks, sleeps and dreams drag” still allows Benjamin some time to think of new acts when “the inspiration sometimes pops into my head.”

With one of his most popular acts including Suzie, the mop, “which is funnier than a blow up doll and my favourite act to do”, it is performing on stage which Benjamin enjoys the most: “I do drag because I love it, I do it so other people can see that they could do it as well and feel the happiness I feel… that is why I do it, to inspire others.”

“Being a Drag King doesn’t make you a lesbian”

Taking inspiration from Mick Jagger: “the way he moves on stage and dances is amazing”, and British comedian Lee Evans, the third inspirational figure to inspire Benjamin’s performances is surprising, to say the least, “He is also based on Mr Bean as well”, Benjamin stated, as I waited for the punch line – no punch line came.

“I used to watch him when I was younger and not find it too funny and now I look back and think, what he is doing is quite funny. Benjamin doesn’t really speak on stage. He does lip sync all the time and Mr Bean never speaks, he just does a little mumble.” 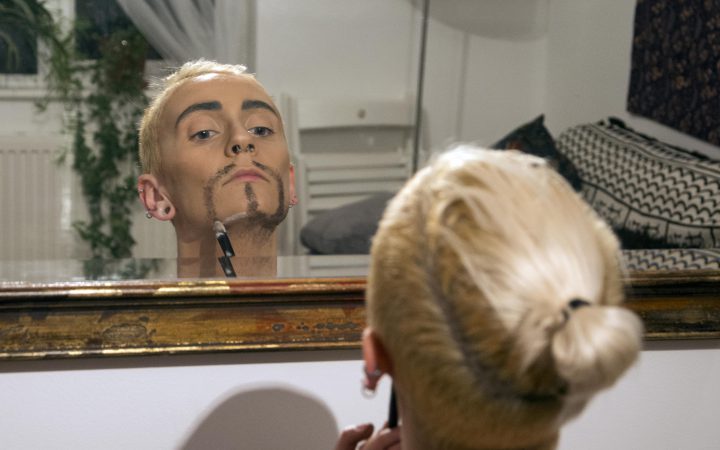 From cutting up brown hair extensions to create the perfect beard, sculpting a jaw line with Kim Kardashian worthy contouring and remembering to shade in eyebrows, Benjamin Butch’s pre-show routine is similar to that of my own pre-gym routine, obviously minus the beard.

“Basically, I go and sit in the changing room for an hour with a drink.” His favourite being Desperados – with a straw.

“Before I bind, body paint, face, beard, six pack and god knows what else… it can take an hour to an hour and a half. If I am not really in the mood to get into drag, which is very rare but does happen, then I can probably do it in 40 minutes.”

When Artefact asked Benjamin about his signature six-pack which he shows off on stage, he proudly proclaimed: “My fiancé does it” – the same smile of relief I would have if I too could draw on abs for minimal effort, maximum results.

Having moved from the sofa to the floor and out of shot from Daisy’s zooming lens, I noticed the tattoo on Benjamin’s tricep, “I like your tattoo, what does it mean?”, I asked, as Benjamin continued to cut away at the hair extensions with scissors, a process sometimes carried out pre-show due to time, “Thank you, it is a rainbow with my beard on it.” 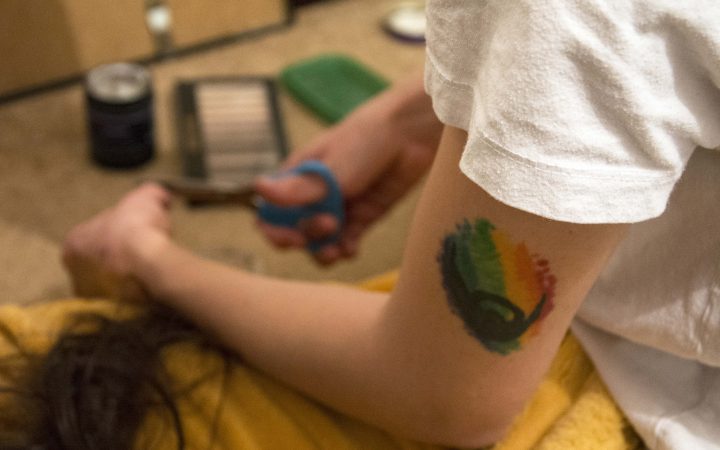 While many Drag Kings, like Benjamin, have the support of their fiancés, families and friends to cheer them on, it is not uncommon for those within the business to hide the truth about performing on stage: “One of my Drag King brothers parents does not know he is a King so he has to sneak out and do it in secret – which is really sad”, Benjamin confessed.

But not all hope is lost, for those who still want to try out the Drag King scene regardless of their situation, “the advice I give to people is to come down to BOi Box and get to know the show, get to know the Drag Kings and hang out with them. Get tips, watch videos and then once you have pieced an act together, then do an open mic slot at Bar Wotever or BOi Box.”

Despite the idea of Drag being a little daunting to some, Benjamin assured Artefact that the scene is very welcoming.

“We are all friends, I am friends with all my Kings… Adam All, Sammy Silver, Chiyo, Rico Del Ray” – to name a few – a truth Daisy and I can both affirm having been invited by Benjamin to attend the launch of BOi Box at Her Upstairs, in Camden Town. 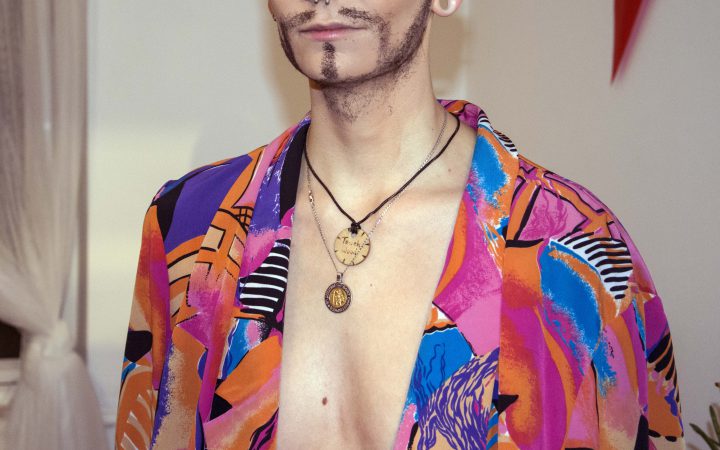 Benjamin Butch in one of his signature shirts

Between weekly performances and attending shows, Benjamin is not always as flamboyant as he is when on stage, swinging round his beloved Suzie, the mop – there are times when going to the shops or going out to a bar require some downtime for even Benjamin Butch.

However, it is Benjamin’s fans who are not often aware that he is not always in Drag King mode.

“I had someone come up to me the other day and say, ‘Are you Benjamin Butch?’ When I said yes, they said, ‘I didn’t recognise you with all your clothes on.'”

“Are you Benjamin Butch?… I didn’t recognise you with all your clothes on”

We laughed, considering Benjamin’s signature looks range from open shirts to getting down to his boxers.

After an hour or so of preparation and the completion of another successful performance, Benjamin can usually be found soaking up the atmosphere and have a drink alongside the rest of the audience.

“If I am staying in the club, I will just stay in drag and drink there but if we are going to go elsewhere, then I will de-drag  – it depends what mood I am in.”

Catch Benjamin Butch and the rest of the Drag Kings’ perform around London at the RVT’s Bar Wotever, every Tuesday night and regularly at BOi Box, The Glory, Kingsland Road and The Eagle, Vauxhall.

All images by Daisy Cox