On the road with the modern day hippies

24 year-old Marino Mazor and his sister Marilisa, 19, were standing on the side of a road with their thumbs up.

It was mid-August somewhere in Greece so the summer breeze was helping them to cool off as the heat radiated from the sun-bathed soil.

A long highway with limitless options laid ahead of them.

Every car that could potentially stop was another ride to the unknown, another option for a completely different path, another possible memory.

A car stopped and the driver asked them: “Where to, guys?” their response was: “Anywhere!”

Hippies embraced hitchhiking as their transportation of choice because it was utopian, cheap and most importantly, it gave them the feeling of freedom.

“When you’re on the road with your thumb out, you feel freer than you’ve ever felt”

There is no official data showing exactly how much hitchhiking has declined over the years, but most people agree that the number of hitchhikers is dropping mostly due to transportation being cheaper and for safety reasons.

However, it hasn’t died out completely: “I wasn’t aware of how many people still hitchhike until I started doing it myself,” Mazor, a student from Croatia, said.

It is a common belief that hitchhiking has been around since the invention of transportation but in its form as we have it today it started with the invention of car in the early 20th Century.

It became especially popular when Jack Kerouac, an American novelist explored it in one of the milestones of hitchhiking literature, the book On the Road, which was published in 1957.

He was one of the pioneers of the ‘Beat Generation’, a group of authors whose literature influenced American culture in the post-World War Two era.

The book was based on his travels around America and gave many romanticised views on hitchhiking: “Nothing behind me, everything ahead of me, as is ever so on the road. There was nowhere to go but everywhere, so just keep on rolling under the stars.”

Marino shares similar sentiments: “Stories can’t convey the emotions I’ve experienced while hitchhiking this summer.  From the biggest fears to the most precious moments when you realise that you are truly alive,” he told Artefact. 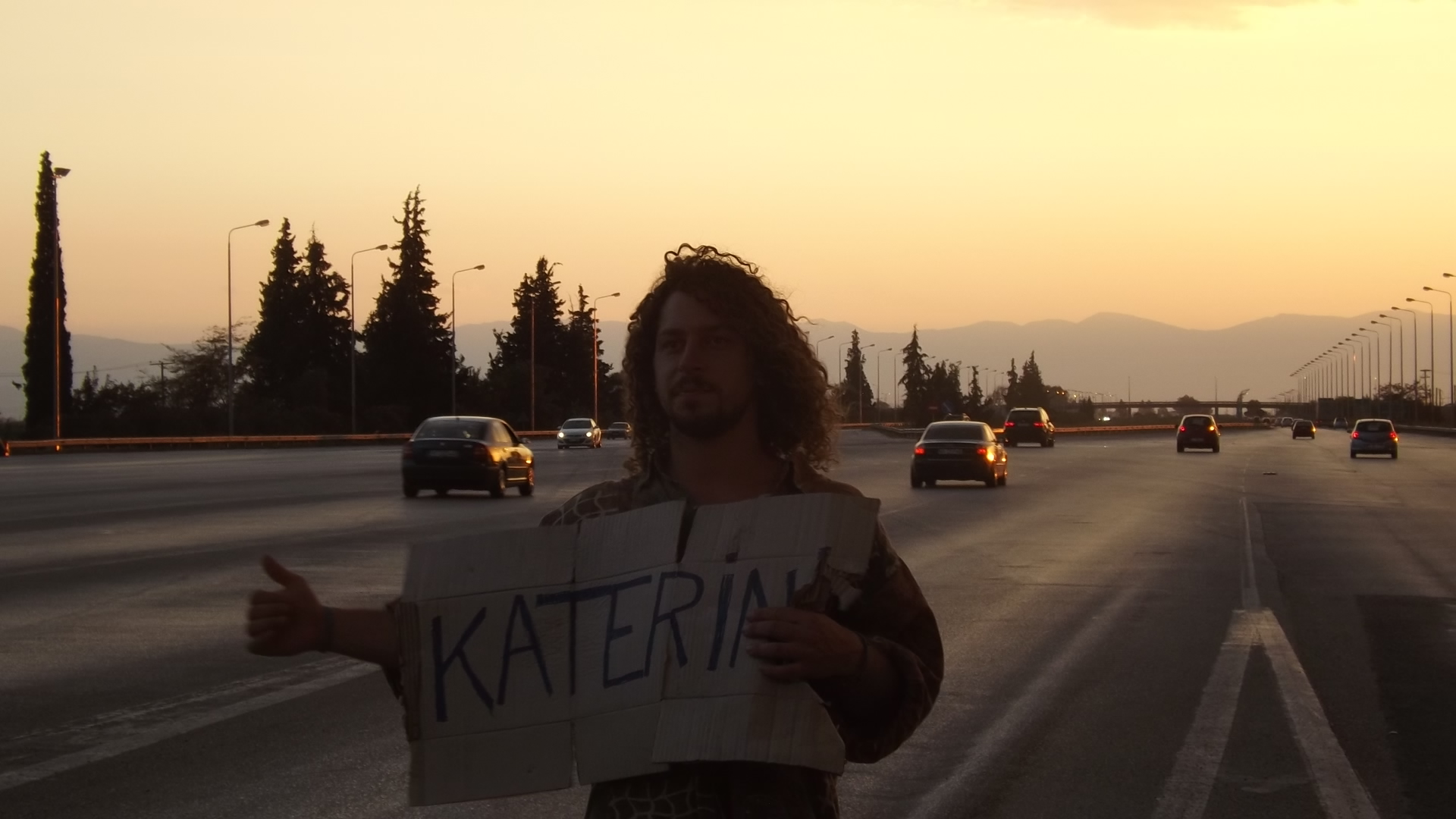 Marino hitchhiked with his sister for 40 days last summer and travelled 2,300 miles through Croatia, Hungary, Serbia, Macedonia, Greece and Italy.

Hitchhiking is cheap, energy efficient and it allows a person to go to places public transportation sometimes does not go.

So why it is it so much less popular than it used to be?

Safety is usually considered as the main reason why fewer people are doing it nowadays.

“Riders on the storm, there’s a killer on the road,” as Jim Morrison, from the influential 1960s band The Doors, sang.

In the UK, the murder of French hitchhiker Celine Figard near Newbury in 1995 attracted huge media coverage.

Carlo Ballardini, a 23-year-old engineer from England who frequently hitchhikes around Europe with his guitar told us: “People are more cautious and less trusting. Also, media is painting a negative picture of hitchhiking.”

“Nothing behind me, everything ahead of me, as is ever so on the road”
– Jack Kerouac, On The Road

In the US there were a series of seven unsolved murders of female hitchhikers that took place in California in 1972 and 1973, known as the ‘Santa Rosa Hitchhiker Murders’ .

The 1986 American horror film The Hitcher about a psychopathic hitchhiker certainly didn’t improve the image hitchhiking already had in a society.

Hitchhiking has a potential risk for sure and it’s important to be cautious while doing it: “Always be careful, it’s a good practice to let someone know, like a member of your family or a friend, the registration number of the car you are entering,” Marino advises.

Speaking of his own experience Marino told Artefact how during their travels this summer his sister almost got kidnapped.

When they were going from Greece to Italy by ferry, the lorry driver who picked them up said that he would come to pick Marino up later because if he transfers his sister separately they will not need to pay individual tickets as he will pretend that she is with him as his daughter.

The driver disappeared with her for the whole day: “At the end we sorted it out because I contacted the police and they contacted his boss so he released my sister in the south of Italy and that’s where I eventually met her.”

“Reasons why less people hitchhike these days are probably fear and the fact that generally people have more money,” Mikael Gunter told us.

Michael is a 28-year-old busker from Australia who is hitchhiking around Europe for two-and-a-half years and has so far covered around 47,000 miles. 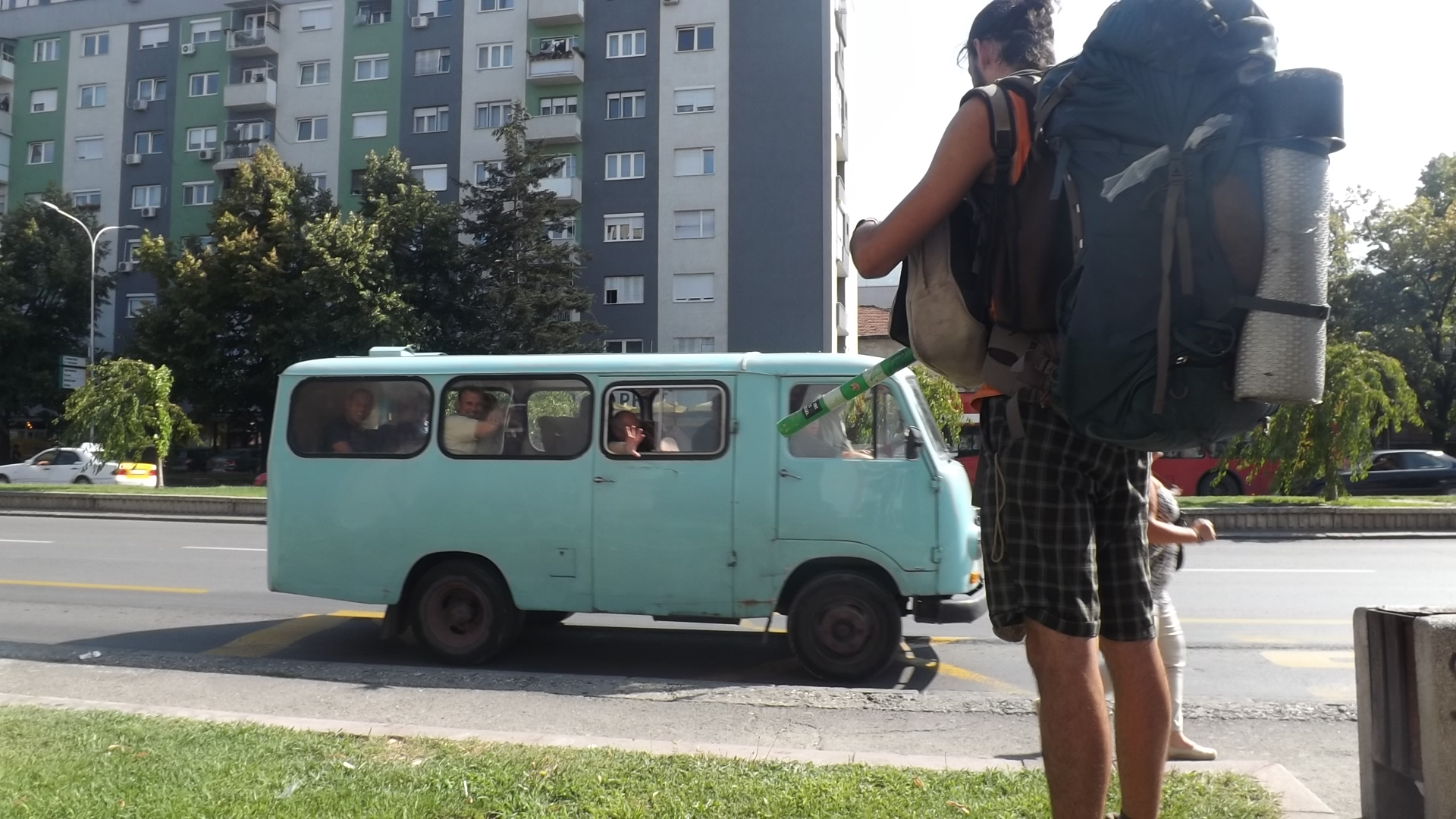 One of hitchhiker friends Marino made during his travels [Marino Mazor]

Although hitchhiking has potential risks that doesn’t mean we shouldn’t do it.

After all, so many activities people do are dangerous but that doesn’t stop them and even the most mundane activities like driving a car or crossing a road pose a possible threat.

“When the adventure came to an end, I started to think if all of that was worth it, to risk life to that extent. I felt completely alive. When you are hitchhiking, one day seems like a week and that is when you realise that a routine is just shortening your time,” Marino said.

Hitchhiking allowed him to not only save money but to experience the generosity and positive side of human nature.

“Usually people you meet offer you a place to stay, when you are a traveller you have that status of a traveller and it is in human nature to help the traveller,” Marino continued.

He and his sister didn’t sleep in hostels, as it usually doesn’t fit with the hitchhiking lifestyle.

“We never slept in a hostel because for us that would be limiting, it breaks the fluidity,” Marino told us.

In 1970 Danish photographer Jacob Holdt had a similar experience.

He decided to hitchhike around North America; in his widely acclaimed book American Pictures he says that he was travelling for five years around 48 states and stayed with 434 separate families or individuals.

The poorer the people Holdt met, the greater their capacity for generosity was; not only did he rarely sleep rough but he was guided by the belief that being on the road and having little is actually a form of security, he managed to make the $40 he started with last the entire five years of the journey.

Cassandra Meijer is an 18-year-old student from the Netherlands who hitchhiked in Europe for two months last summer with her best friend – they covered around 1,200 miles.

“What I like the most is the people you meet! The local people tell you a lot about the area and their personal experiences and that is what makes you a traveller rather than a tourist,” she told us.

Except the locals you meet and other travellers, what is interesting about meeting people is the sense of relation you have when you get into someone’s car.

“You talk openly with the driver about your life; they talk about their life. I don’t know why you feel so comfortable telling [a] complete stranger personal things, maybe because you know you’ll never see them again,” Marino said.

Although getting into a car has its perks, as Marino explained, there is also another view on that.

As Kerouac wrote in On the Road, this can become exhausting at a certain point: “One of the biggest troubles hitchhiking is having to talk to innumerable people, make them feel that they didn’t make a mistake picking you up, even entertain them almost, all of which is a great strain when you’re going all the way and don’t plan to sleep in hotels.” 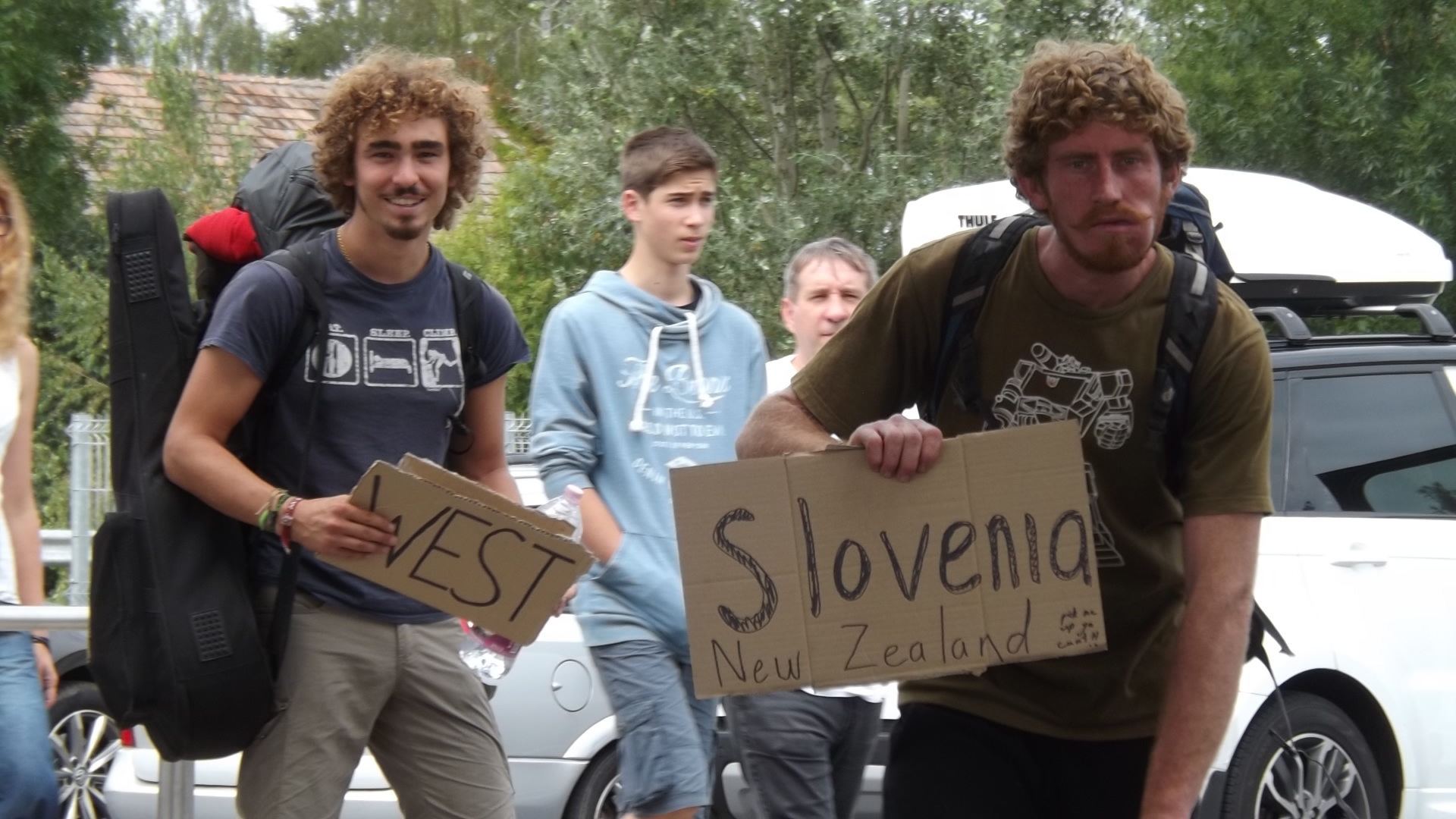 Group of hitchhikers waiting for their ride somewhere in Europe: ‘Let’s hitchhike to New Zealand? Why not!’ [Marino Mazor]

What is also especially appealing when it comes to hitchhiking is non-conformity: “My favourite part is the freedom,” Carlo told us.

For writer Joe Bennett from New Zealand, hitchhiking has always been mostly about the feeling of liberation as well.

Bennett hitched everywhere before buying his first car at age 28 as he writes his book A Land of Two Halves, where he tells his story of hitchhiking around New Zealand.

He says hitchhiking injects adventure into one’s life: “When you’re on the road with your thumb out, you feel freer than you’ve ever felt.

“The journey itself is the experience rather than the destination,” the 48-year-old said in an interview with the New Zealand Herald.

To stand on the side of the road with no exact idea of what will happen is so rare in the modern day where everything has a timetable and there is little space for spontaneity.

The lifestyle hitchhiking provides also brings peace of mind to some people’s lives: “Originally it was about saving money but then it turned into meditation,” Mikael told us.

“When you live in the city, life becomes monotonous, you are playing a certain role and then, when you go on the road, when you hitchhike, you leave that role behind you and that for me [is] the best part of hitchhiking,” Marino concludes.

All images by Marino Mazor