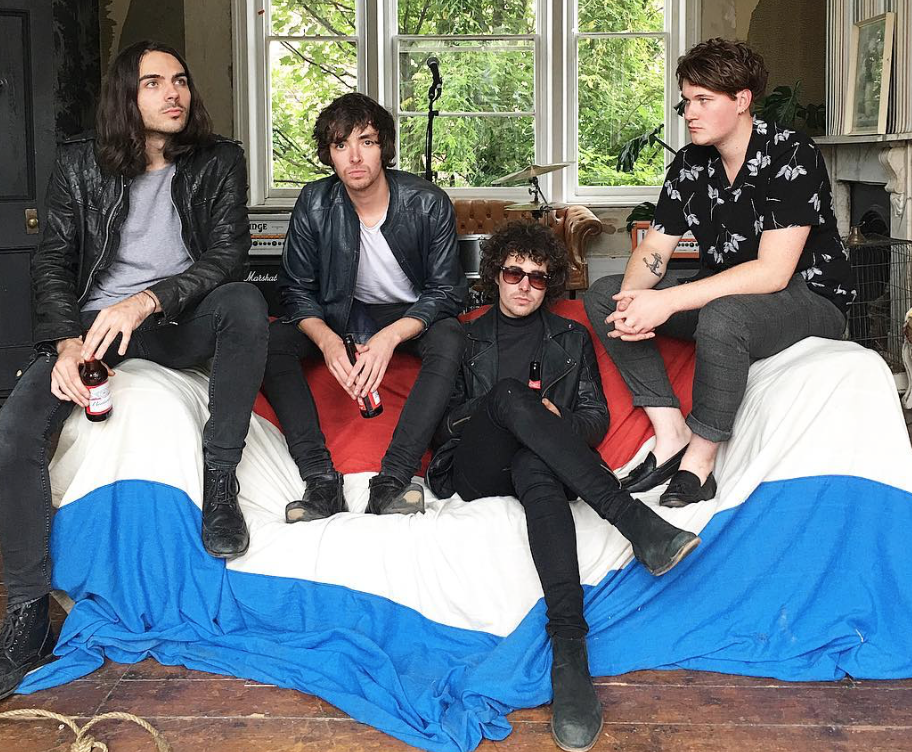 British rock and roll band Hello Operator have cooked up a storm with the release of their latest EP Operator Hour.

After attending one of their gigs and getting an interview with Pete Greenwood, the guitarist and Max Dalton, the lead singer,  I think it’s safe to say these Yorkshire boys have a lot of exciting things coming their way.

As an avid music listener and singer myself, I have always been a fan of old school rock and roll bands that have come about naturally without massive money-making corporations grabbing pre-adolescent, clean cut poster boys that can barely hold a note between them and shoving them so far up everyones nose that the general public have no choice but to listen to them and try to like them.

Gone are the days of song writers and  friendships turning into bands, so when I come across a band that have been together since they were kids, I prayed they were actually good.

Turns out they were.

Having been a fan of the boys since they came onto the scene last year with their smash hit Stephanie, I jumped at the chance of getting to see them live and interviewing them about how it all started.

Meeting them just before their gig at the Seabright Arms, a distinctive little pub and gig space in East London, the excitement and anticipation of the night ahead was already in full swing.

The guys were chilled, dressed in black from head to toe and looked utterly badass.

It was clear they’d done this many times before.

We started by asking lead singer Max Dalton about how the band formed: “It was like, a yearly thing where you play in the school hall and there were seven of us at the start, we just did it as a joke! That’s when me and Pete sort of met, then we carried it on, didn’t we?”

It’s refreshing to meet a band that hasn’t been superficially placed together, like many are nowadays.

“We used to play covers of Nirvana and The Strokes, discovering it anyway,” guitarist Pete Greenwood continued. This to me, was an obvious reflection of their music style so far, very rocky with a strong guitar element.

Like any band, Hello Operator have evolved and changed drastically from when they first started out.

“Well, we used to be pretty shite,” Max laughed. “We used to start off playing one thing and then change the tuning on our guitars and start playing something completely different half way during the song.”

“Just getting all experimental from an early age really,” Pete added.

When asking how their name came about, I was sure it was because of the song by The White Stripes. However, that wasn’t the case.

“It’s actually not from The White Stripes, although many people think it is. It was actually from a Black Keys song called Little Black Submarines and one of the lyrics was ‘operator please’ or something like that, we just thought it sounded cool and picked up on it. It’s a badass name, probably one of the best that’s out there now!” Pete laughed.

“It’s not ‘the’ something. We tried to avoid ‘the’, it’s been done so many times before,” continued Max.

“It was like, a yearly thing where you play in the school hall and there were seven of us at the start, we just did it as a joke!”

It was obvious the guys were influenced by old school rock and roll. It came across in their style, mannerism and most importantly, music.

“We vary, you like your heavy metal don’t you Pete?” Max laughs. “System of a down, Rammstein. We get our influences from various different artists actually. There’s also Queens of the Stone Age, The Black Keys, Rage Against the Machine. Bit of Arctic Monkeys, well, the third album.”

One important question that has affected the music industry and the way in which artists make a living is the internet.

With many people snubbing off gigs to watch them online and internet-famous celebs becoming musicians purely because of their massive following, the idea that it’s even harder to become successful nowadays is prominent.

“I think social media and the internet is a good and bad thing,” Max replies. “It’s good to get yourselves out there and it’s easier to access music but then again it sort of ruins it because there’s also a lot of shite out there.”

“A lot less people come out and see it now because it’s all online, someone will no doubt be live streaming the gig tonight,” Pete responds. “So you can actually be here without being here. However, it is another avenue to get your music out there.”

London is all about cool venues and hidden gig spaces, it’s the reason why there is such a great music scene and so many different options when it comes to watching bands play.

“Our favourite place to gig was Electric Ballroom in Camden, it’s probably the biggest we’ve played at.”

Dating back to the 1930s, Electric ballroom has come to be the hub musical talent in the heart of Camden Town.  Bands such as Joy Devision, Red Hot Chilli Peppers and The Killers have graced the stage in the last decade.

This has given the venue the star stamp of approval, which makes any band able to play on that stage a pretty big deal.

“Then there’s festivals which are always good. Y Not Festival was the best one. It wasn’t as big as Leeds or Isle of White but the line up was better and you didn’t have to walk miles and miles between stages,” Pete says.

Unlike London, the guys hometown of York has a much smaller music scene. The differences are pretty drastic when performing there.

“We do play in Yorkshire – we do this thing every two months called ‘Operator Hour’ where we get different bands in to play – the next one is December 22.”

But the guys are always faced with competition with other bands, this is quite common in the music industry, the rivalry is always stronger in smaller towns because there are smaller audiences that always pick favourites.

This makes it even more important for bands to stand out and make their mark.

“There’s been bands on the scene that have been doing it for ages, but they’re not as good as us though,” Pete chuckles.

We asked the guys if they had any advice for those who are thinking of starting up a band of their own.

“You have to believe in it, but you need to also realise how hard it is to get into and it won’t just happen,” Pete explains. “You also can’t doubt yourself at all, it’s a lot more hard work than you think.”

“There’s a lot of hard work that goes into it and a lot of sleepless nights in vans, stuff like that. However, it’s worth it in the end, if it’s what you want to do, it’s the best job in the world.”

As the interview with the band drew to an end, I was pleasantly surprised at how driven and talented these guys were.

Starting out as a seven man boyband in a secondary school talent contest in York, to gigging across the UK at festivals such as Leeds and Isle of White, there was no doubt in my mind that if these guys were anything, they were driven.

As well as being great songwriters, watching them play live was a great experience too as they have a rare ability to get the audience involved and interacting whilst still keeping it effortlessly cool.

Personally, I think it’s time we take it back to the traditional 90s rock anthems and have more bands like Hello Operator on the music scene, which know how to capture that style of music so well without it sounding cheesy and staged.

These cheeky chaps definitely have an exciting future ahead.