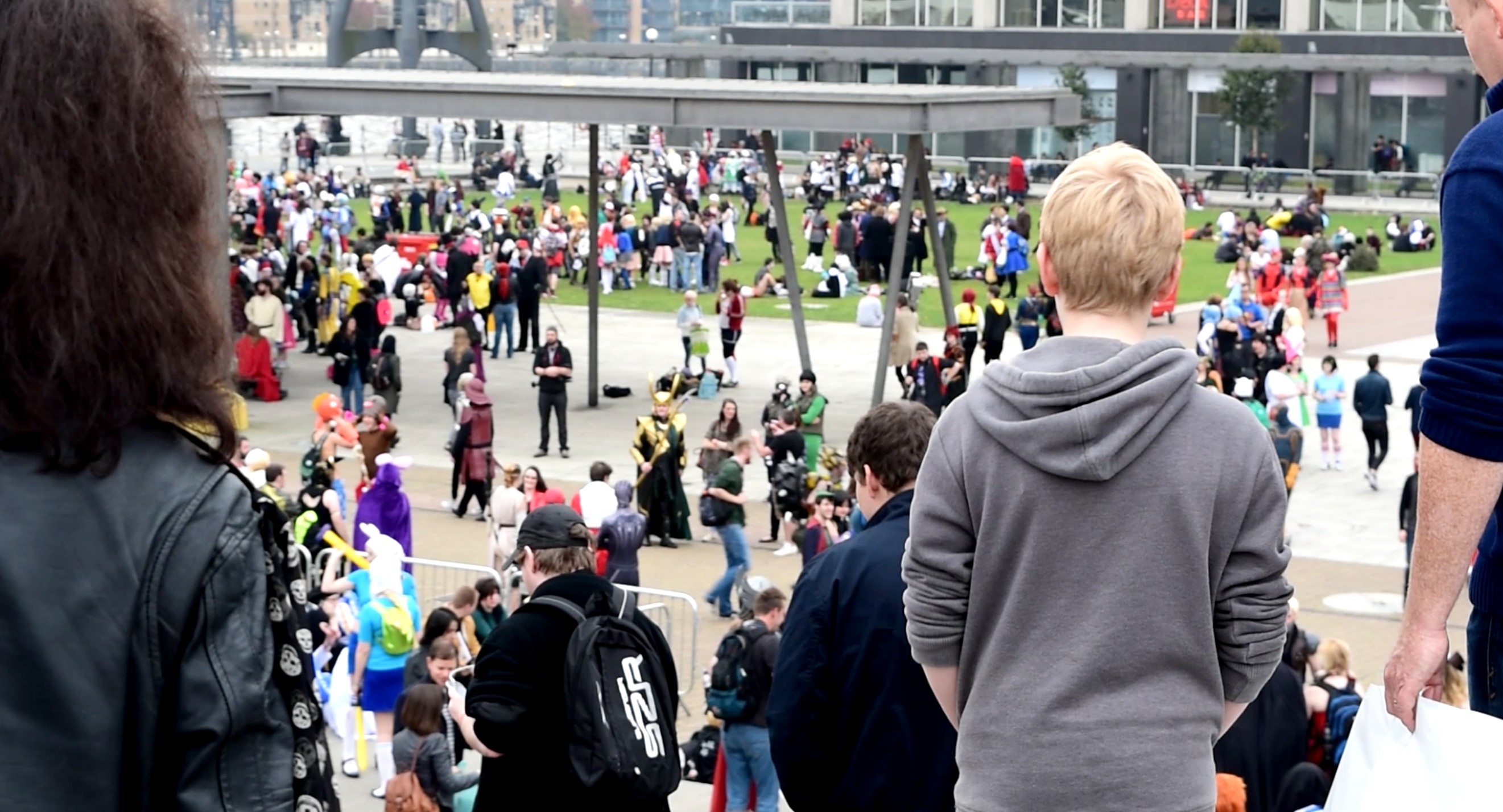 Comic Con is a convention that celebrates fantasies through multiple genres and people can express their favourite characters through costumes and performances.

It’s a multi-million dollar business that takes place across the world and has a lot to offer.

From karaoke to video gaming. Unique food to limited edition merchandise, it’s safe to assume that Comic Con is a utopia for all things alternative.

ExCel, situated in Royal Victoria Dock has been home to London’s Comic Con since the beginning in May 2002.

This year it housed many large companies showcasing their new products to 131,308 fans over three days in October, making it Europe’s largest Comic Con convention.

“A lot of friends are here at the moment and they’ve always said that if you’re going to make money, this [Comic Con] is the one to do it”

Starting my journey around the place, I decided to go behind the scenes first and find out what it’s like to be a merchandiser.

I wanted to see all this fun from the outside, so I met up with Dan from Bleadin Marvellous who has been selling at Comic Con for 10 years.

“A lot of friends are here at the moment and they’ve always said that if you’re going to make money, this [Comic Con] is the one to do it,” she says.

She tells me how she deeply loves the event and how it makes everyone feel comfortable in who they are and what they like.

She feels that over the years, it has become more acceptable to indulge in the world of fantasy without being labelled a nerd.

The more I explored the more options of things to do popped up; I saw Game of Thrones fans sitting on the Iron throne and having professional photos taken of them – perfect for their bedroom wall.

There were also karaoke competitions taking place and the participants were not your ordinary extroverts.

A lot of them told me how they’re incredibly shy and only participated in karaoke because for a reason they can’t explain, Comic Con just made them feel confident – it may be the costumes or it could be that they’re amongst like-minded people. 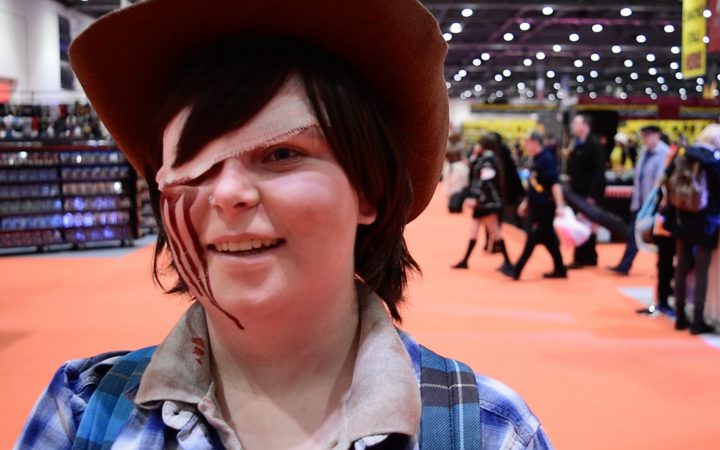 Zoey dressed as Carl Grimes from The Walking Dead

I follow one cosplayer in particular who dressed up as Carl Grimes from The Walking Dead – 19 year-old Zoey Jenner is a returning attendee and told me that the convention is something that she’d never want to miss out on.

“I’m especially looking forward to the ‘Summer in the City’ area,” she told me. Summer in the City is a zone in the building where cosplayers can meet their favourite YouTubers and get their autographs.

Zoey got to meet LukeIsNotSexy and was incredibly excited to have him sign a portrait she drew of him.

Luke has almost 600,000 subscribers, he told me that he would look forward to meet each and every one of them if it were to happen.

Zoey then moved on to explore more of what the Comic Con had to offer and I decided to speak to more cosplayers about why they came here too.

“This is my favourite costume but my favourite Comic Con was probably the May just gone. Even though I got burnt, It was on point”

Meg and Brian were keen to showcase their costumes to me and were happy to answer a few of my queries.

“You meet people who are into the same things so it’s a nice way to socialise. It’s my seventh time at Comic Con and a lot of the stuff are kind of the same but there’s always new people and new things to interact with,” says Meg.

Brian was probably the most confident person I met during the weekend. He dressed as Pinkie Pie from My Little Pony: Friendship is Magic.

“This is my favourite costume but my favourite Comic Con was probably the May just gone. Even though I got burnt, It was on point.”

The first thing I noticed about their costumes was that it was themed to a certain aesthetic. Comic Con is home to so many different genres that are distinctly unique.

From fairy kei styles known for their child-like clothing to the standard gothic that everyone knows about – the best part was that each genre didn’t seem divided but integrated with each other at the venue.

However, I wanted to know about the steampunk genre in particular so I spoke to one of the owners of Second Coming Clothing, who is simply known as ‘D’.

‘D’ explained how steampunk is all about living in an alternative universe: “We often say there’s no such thing as doing it wrong because it’s imagination. Often people do seem to stick to the victorian age but there are other ages, like Steam Wars (Steampunk Star Wars).”

“The idea is that at some point in the past, there were many alternate futures split off from each other. And one of these imagined futures, we’ve invented laser guns and computers but we haven’t invented plastic or electricity so we have steam-powered mahogany computers. It is a really good community it is one of the friendliest most accepting communities I’ve ever been part of.” 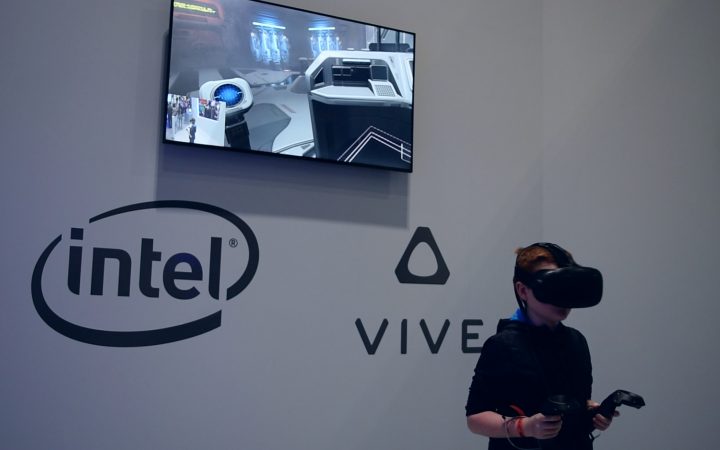 Virtual Reality gaming could be the future

From one vital part of Comic Con to another, gaming is very important. Although card battles is still a big thing, video gaming is still the most popular source of fun.

The video gaming industry is worth more than £4.2 billion as of 2015 and Comic Con is a big contributor to that net worth – it’s used as a platform to showcase new games to the industry’s target audience, allowing them to test the waters.

But digging deeper, it seems as though this year was full of virtual reality consoles. Considered the future of gaming, companies such as Alienware have invested large sums of money to be ahead in the game.

They allowed visitors to take a sneak peak of their latest consoles and it seems to have gone down fairly well, with everyone I met giving the experience a thumbs up.

Putting the focus back on to the types of people who participate in the event, I realised that there were hundreds of families attending. 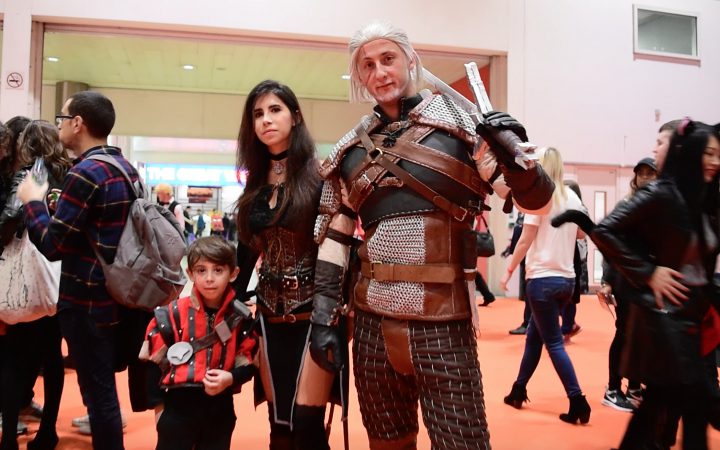 The Amos’ were the first family that I bumped into. “I’m playing away with it. I’m using the kids as an excuse to come but really I’m the big kid here. I wish I had more money to spend on toys,” said Mr Amos.

“It’s great for families but I do think it gets a bit busy over the weekends so Friday is best for little kids. There aren’t many baby changing rooms facilities around so that’s a little problem,” another attendee, Anne Marie, told me.

Although there were parts of the event that she didn’t like Anne Marie assured me that she’ll definitely be attending again next year.

There was also a great selection of food available. In the centre of the building, there were standard foods like the classic burger and chips, sandwiches and pizza but on one side there were Japanese food stalls that goes down well with the anime and manga focus of the convention.

There was a variety from hot to cold and savoury to sweet so the whole place catered for even the pickiest of eaters.

Many of cosplayers that I spoke with raised the same point: They felt that they were safe at events like these, that in everyday life they would be mocked or bullied for living an alternative lifestyle.

One in four students in the UK experience bullying, so this was a significant issue. “It’s a great place to be where gender-bending is considered normal,” one cosplayer told me.

Hannah, another cosplayer, said: “Out and about we don’t fit in with everyone else. But the second we go to Comic Con we blend in and it feels like were at home and this is a whole new family of strangers that you can rely on.” 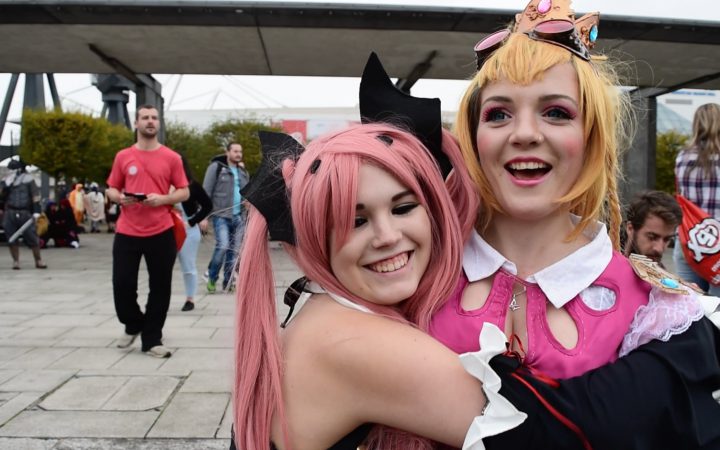 Hannah and her friend

Her friend also said: “People ask a lot of questions and they don’t really understand how complex it is when going to a con. It’s almost like a lifestyle, and people judge you for being a character that’s different but once you come to a convention everyone appreciates all the work you put in. So whether you spend £5 or even £100 everyone loves you.”

It seemed to be unanimous that Comic Con has made them more comfortable in themselves.

Many individuals expressed anxiety when commuting to Excel – they felt their bright costumes may make them targets for harassment and on further research I discovered such concerns we well founded.

An example of these attacks is when an Autistic man was brutally beaten and robbed on his way back from Manchester Comic Con just a couple of months ago.

Many women have reported problems with sexual harassment, including reports that in 2014, a young girl was sexually attacked and left in a pool of her own blood in San Diego, the host city of the original Comic Con.

Recently after London Comic Con, a man dressed as the ‘Winter Soldier’, from the Marvel series Captain America, was caught carrying a shotgun in a suitcase near Excel. This incident alerted local police to a potential terror attack and the whole area had to be closed off.

But while there will always be some people ruining the fun for everyone else. It’s not all doom and gloom. It’s still a happy place to be.

“it was really good. I really enjoyed it. I need to start planning my next costume!”

I caught up with Zoey on her way home to reflect on her day at Europe’s biggest cosplay convention ever.

She told me all the merchandise that she bought and how she enjoyed the day and was looking forward to more Comic Cons in the future: “It was really good. I really enjoyed it. I need to start planning my next costume!”

If you now like the sound of attending Comic Con, don’t worry that you missed this year. The next one will happen in May 2017. MCM London promised to go bigger and better than this year so be prepared for fun and action.

Comic Con is home to a surge of creativity with so many things that anyone can enjoy and I learnt that it’s not just about dressing up but also feeling like you’re a part of something bigger.

Make sure you keep up-to-date with the MCM website.

All Images by Deek Hussain Jama