Where poverty lives at the seaside

It’s almost become a cliché that British seaside towns, barring the likes of Brighton, are now nothing more than dilapidated versions of their former selves.

Once the scene of thriving tourism industries, these towns have been crippled by years of declining industries and austerity.

This perception was echoed by a 2013 Centre for Social Justice report that discovered seven out of Britain’s 20 most deprived areas were seaside towns.

The report, entitled Turning the Tide, focused on five seaside towns, which, when analysed together produced a working-age benefits bill of approximately £145 million.

However, according to the organisation, this figure could yet be higher as it failed to include housing benefits, which are estimated at a cost of £220 million.

The entire welfare bill for seaside towns is thought to be around £750 million per year while housing benefits were estimated at £1.18 billion.

Following years of globalisation and austerity, successive generations in these towns have been left with a sour blend of dire education prospects and poor employment opportunities.

This has resulted in a widespread lack of aspiration throughout coastal residents with a recent report by The Future Leader’s Trust offering a bleak analysis of educational prospects in these towns.

The trust’s report indicated that children who grow up in England’s coastal towns are consistently underachieving compared to their peers in both rural and metropolitan areas.

This, the organisation says, has been caused by geographical, economic and cultural factors, which include declining industry, limited transport infrastructure and low-paid work.

According to the organisation this has left a simple explanation: “Coastal populations simply have fewer choices than many others. The sea has turned from the basis of local wealth to a barrier that restricts opportunity.” 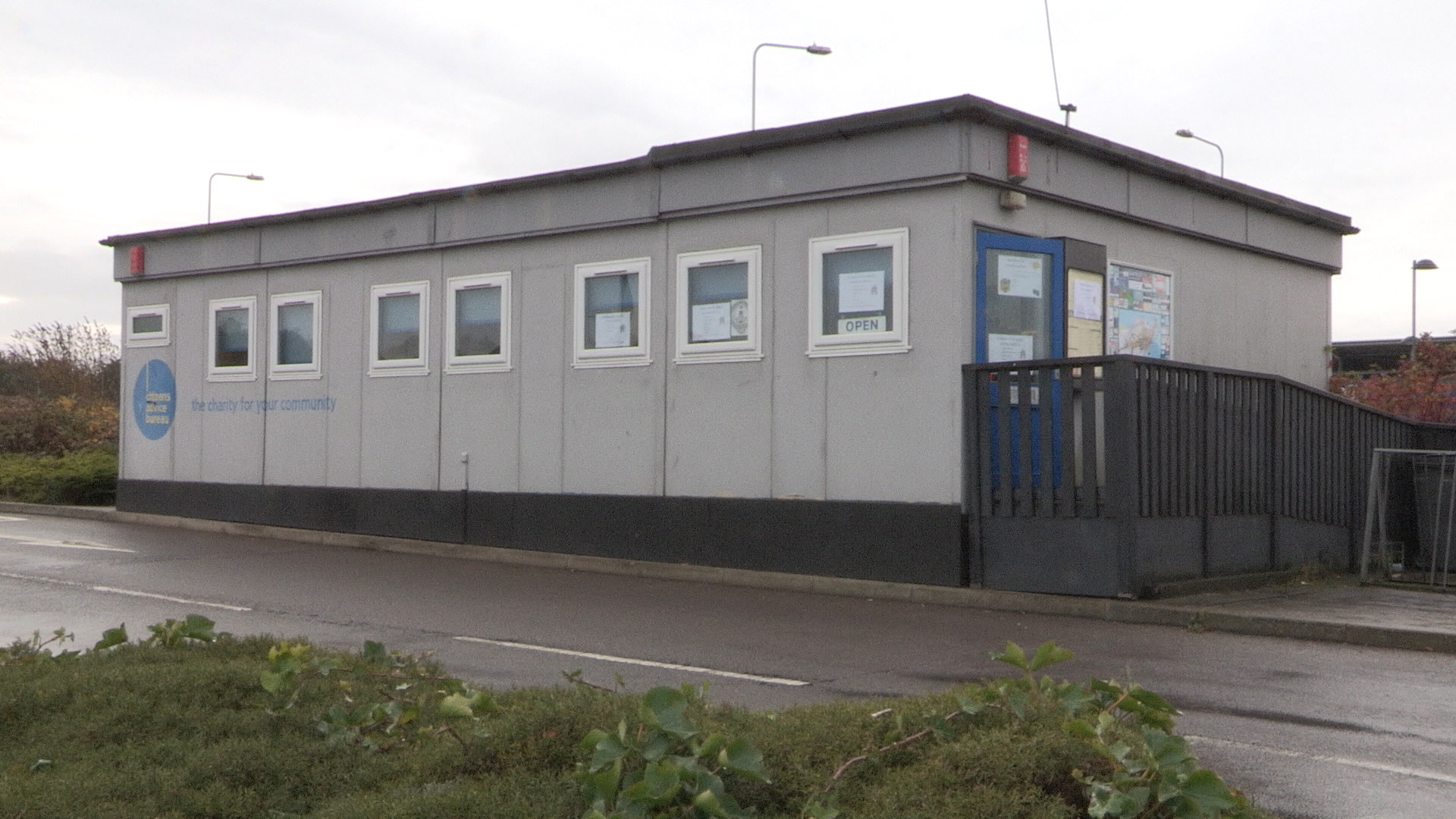 Harwich is one such town. Located at the tip of Essex, the town is home to a relatively isolated community, which has endured high levels of unemployment following the decline of what was once a booming industry in shipping.

As a result local charity workers in the town say it is facing a tsunami of deprivation, shows no signs of drying up.

Despite its connection to mainland Europe through an eerily quiet shipping terminal, the town is essentially cut off from closer hubs of Ipswich, Colchester and London with only one train arriving and leaving per hour.

Arriving at one of its three main stations, ironically named Harwich International, the town’s rich shipping past is evident with a large port dominating its coastline’s horizon.

Amongst this scene, lorry drivers from across Europe use the port to rest before continuing their journeys into England and vice versa.

Shortly after getting onto British roads, these lorry drivers will drive past a relatively modest looking mobile cabin located at the corner of a popular supermarket’s carpark.

This cabin is the Harwich and District Community foodbank, which was formerly used by the Citizen’s Advice Bureau but now sees desperate residents seek food parcels rather than everyday guidance.

The independently-operated charity opens its doors two days per week to provide food for deprived residents of all ages.

Volunteers there told Artefact that they first have to establish an applicant’s financial situation before handing out food parcels. 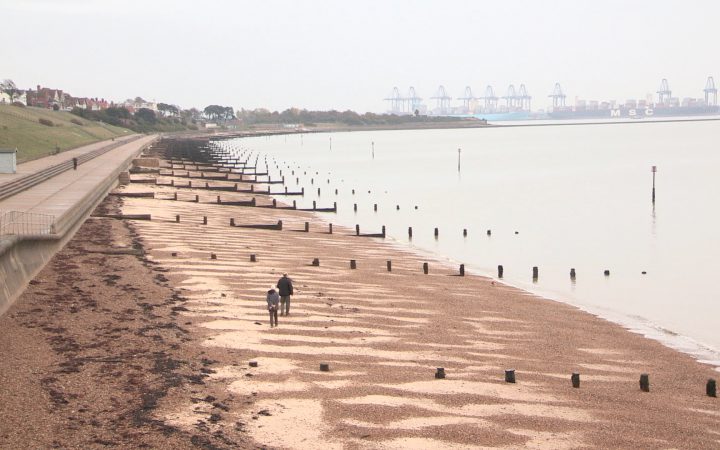 The beach at Harwich stretches as far as the eye can see, but is usually virtually empty [James Cropper]

One young woman, who wished not to be named, spoke of how she was at the food bank on behalf of her mother as their family was struggling to cope with a string of financial problems.

This, she said, showed that the government’s new benefit cap was already having a profound effect on Harwich residents as her family was now around £60-80 behind on a rent payment that they would have been able to pay just weeks earlier.

The cap, introduced in early November, was announced by former chancellor George Osborne to reduce the amount of welfare that claimants are entitled to.

This has resulted in the amount of benefits that families can obtain being reduced from £26,000 per year to £20,000, which campaigners have said will affect 88,000 household.

This has caused worry at Harwich’s food bank as local volunteers say they believe it will lead to a greater demands on their service.

This is in contrast to a narrative of benefit caps helping people back into work as portrayed by both Cameron’s and May’s governments.

When the cap was introduced, the government’s work and pension’s sectary Damien Green said he believed that it represents “success”, and told the BBC’s Today programme “the best route out of poverty is to have a job”.

However, for Harwich’s most deprived residents, the prospect of gaining a job isn’t something that they believe is remotely possible – due to a combination of the town’s crippled industries and young people being let down by stagnating education. 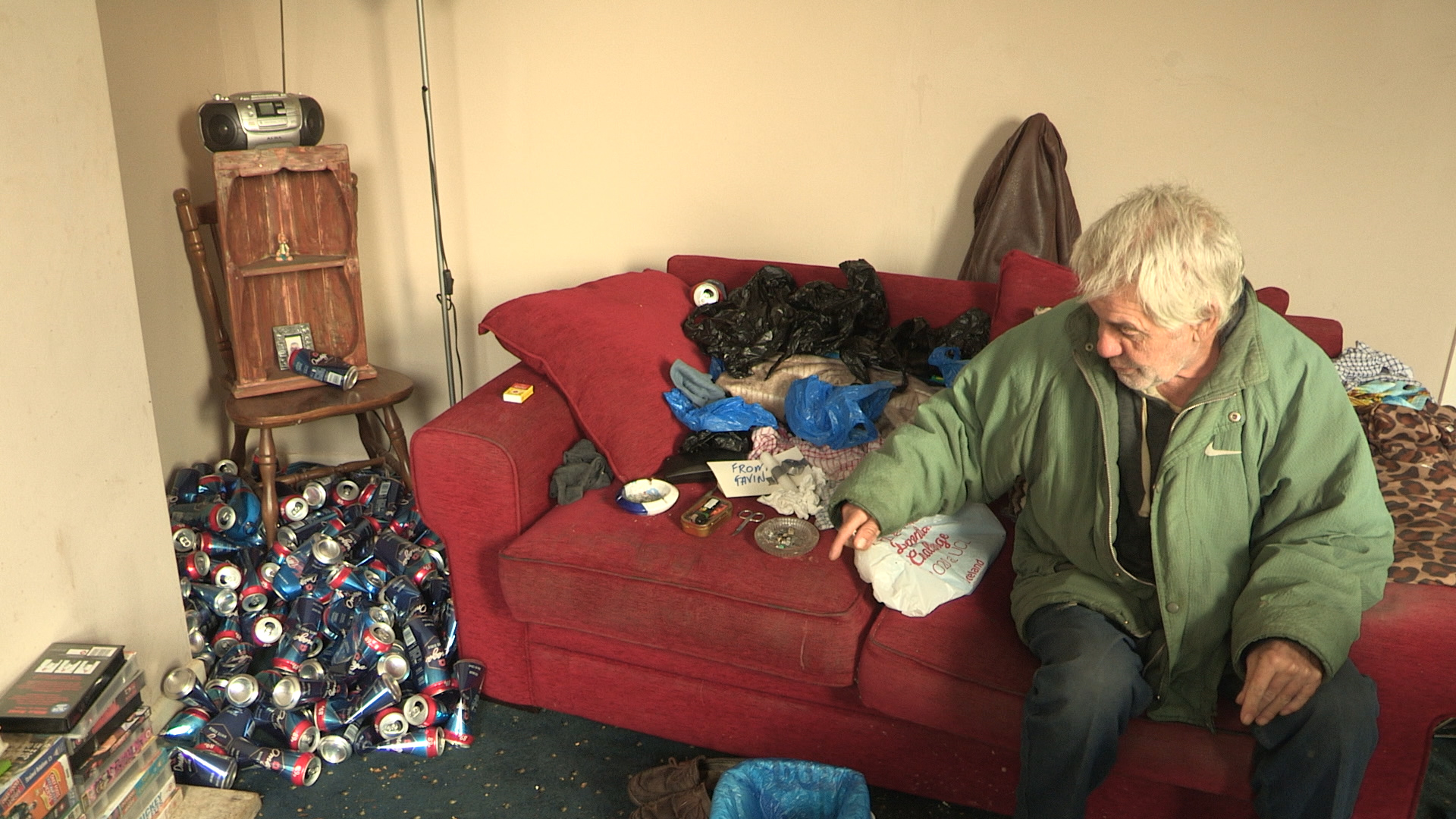 Food bank volunteer Serry Barker told Artefact: “In work poverty is a trend as work does not pay because rents and utilities have risen beyond anything a working class family could once afford. Every pathway out of poverty is blocked for these people.”

These strains are not just confined to the working age residents of Harwich. According to a 2014 report by the Campaign to End Child Poverty, the town has recently been plagued by high-levels of child poverty with certain areas seeing over 35% of children living in deprived conditions.

In Harwich, many food bank visitors use the charity to provide their children with living essentials such as food, washing supplies and cleaning products. The sight of nappies being placed into parcels is also a common sight at the food bank.

The sheer level of poverty experienced among Harwich’s younger generation has been attributed as a major contributing factor behind the poor qualification success rate of residents by several recent reports.

This can be seen by analysing data from the 2011 national census that showed 34 per cent of adults in the town possessed no qualifications, which was well above the national English average of 22.5 percent.

According to the data site School Dash, which analyses and ranks school results throughout England, Harwich’s secondary school ranked 2,171st out of a possible 2,599.

Despite these grim statistics, the town’s centre is similar to any other coastal town with a relatively modest high street positioned parallel to its long peaceful seafront.

Nearby is a district known as Old Harwich, where the environment immediately changes – poverty is not just a buzzword but a stark, visual reality.

It brings literal meaning to the popular phrase of crossing onto “the wrong side of the tracks” with dilapidated houses, boarded up windows, rough street corners and heavy alcohol use in evidence.

It is completely poverty stricken.

This is where we met Wayne, a middle-aged resident who did not wish for his full name to be used – he is one of many people in Old Harwich who currently claim benefits, in his case the Employment and Support Allowance, otherwise known as ESA.

However, with just enough money to pay for hot water, electric and food, he is one of the luckier residents in this run-down area.

[pullquote align=”right”]“Every pathway out of poverty is blocked for these people.”[/pullquote]This became clear when Wayne told us about his next door neighbour, Philip, whose story illustrates how poverty can remain hidden in areas such as these.

“My friend has had his money stopped on more than one occasion over the last eight weeks. They dropped him down to £21 a fortnight and then back up to £31 after I spoke with them to try and explain that he’s not a well man and he needs help,” Wayne told us.

According to local food bank volunteers, the issue of benefit sanctions has been a major contributing factor behind people depending on their services.

“People are being ruthlessly sanctioned by the job centre for the smallest infraction,” Serry Barker confirmed. “They are deducted 40, sometimes 50 per cent of welfare payments for months at a time, then left to fend for themselves.”

We met Philip as well, and he told us how benefit sanctioning was having a substantial impact on both his health and ability to live independently.

When he visited the food bank he told volunteers that it had been three weeks since he’s been able to pay for electricity, leaving him with no heating and limited or no access to living essentials such as a working fridge.

He also says it’s been more than a year since he last has any gas, which has left him without central heating, hot water and the ability to cook hot meals and clean his flat.

Wayne says he has been helping out: “I’ve helped him as much as I can by giving him hot water, so he can make himself a coffee, tea or soup and I’ve also cooked him meals”.

Philip’s freezer, unusable for three weeks, is now infested by a swarm of maggots that filled the freezing living room with a pungent stench of decaying insects.

On top of this Philip admits he suffers from alcohol dependance; he told us that at one point, his doctors warned him that he could die within less than a year if his drinking continued.

However, when asked if this scared him Philip admitted “I get to the stage where I don’t care” and said that he would be “relived if his life came to an end”. At this point Wayne knocked at his door with a kettle full of hot water.

According to food bank volunteers, it is people like Philip who are most susceptible to food poverty in towns like Harwich.

They are usually single and childless, or not in contact with their families, which gives them less motivation to ask for help like food parcels.

“The most vulnerable group in my opinion are single adults, if they are not responsible for children, most will not have the incentive to seek help from us,” Barker told us. “It’s a humiliating experience for an adult to ask for food because they cannot feed themselves.” 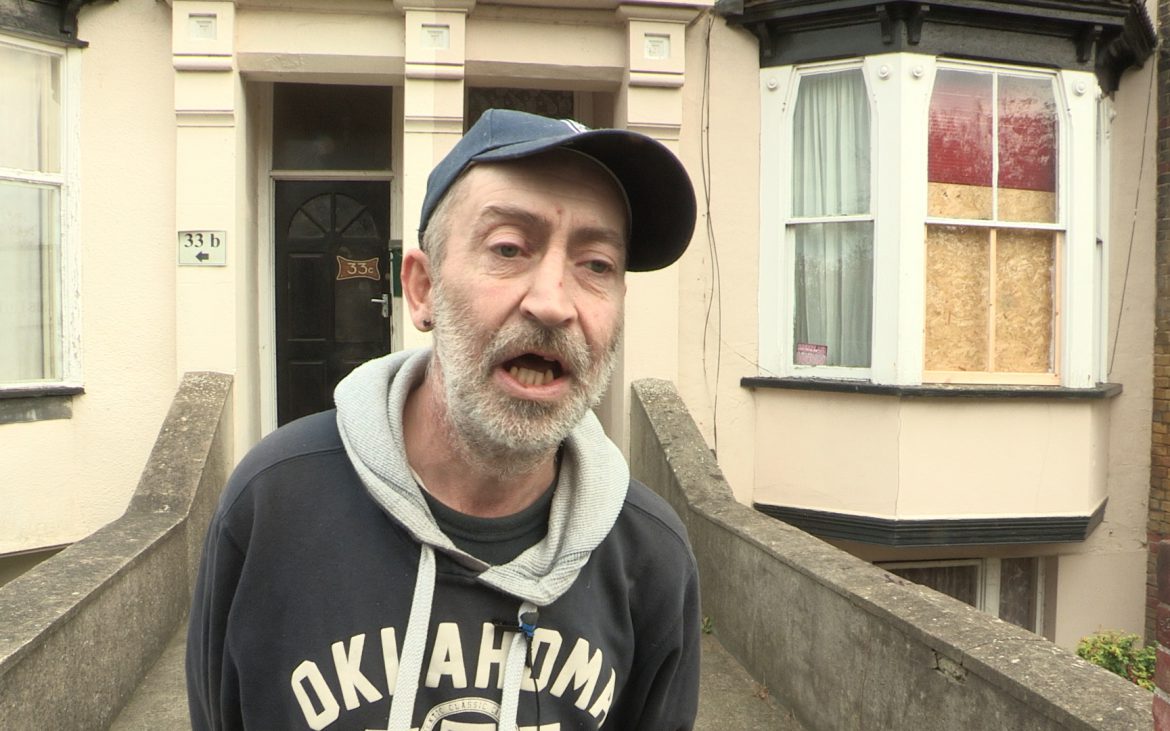 The use of benefit sanctions came under fire during Ian Duncan Smith’s time as Work and Pensions secretary from 2010-2016.

In an exchange filmed by the Camden New Journal earlier this year, Duncan Smith claimed that 75% of people who had been sanctioned over this period said the experience had “helped them focus and get on”.

However, this sentiment is not shared by deprived Harwich residents who feel abandoned and even targeted by the decisions of Coalition and Conservative governments since 2010.

“There just does not seem to be the help for people in these situations,” Wayne told us.

And Harwich is just one of dozens of other coastal towns that feel they have been, and will continue to be, ignored by Westminster.

As an isolated corner of Essex that only experiences the temporary sight of big businesses when their lorries pass through its port, Harwich does not feel like a town where words such as ‘aspiration’ and ‘hope’ will return anytime soon.

For many residents, that ship has long since sailed from Harwich’s docks with those left behind on shore being subjected to conditions many in Britain would struggle to imagine.

With another winter in full swing and the government’s recent benefit cap beginning to take effect, local volunteers are preparing themselves for a tough new year ahead.

By Taysan Ali-Osman
5 Mins read
Child surgery is difficult for everybody involved, however there is a drastic delay in the wait time for children at this current time. This article Hearst from those waiting and those operating.
AudioNews

How does Local Government funding affect you?