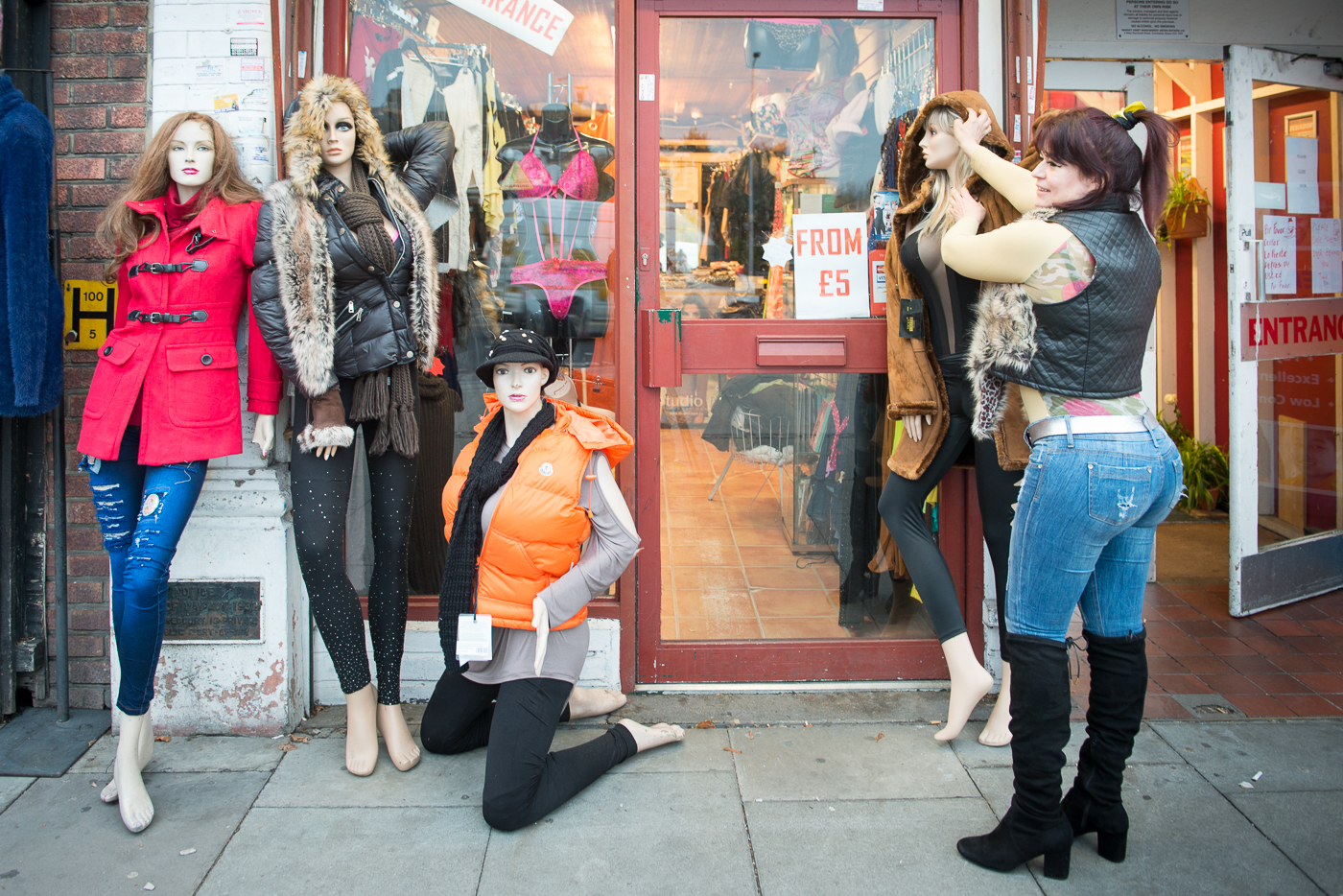 In the capitalist metropolis of London is hard to imagine a place where money is not the main currency but humanity is the medium of exchange.

This reality that seems too idealistic to be real is called Pueblito Paisa – but it is a rarity that is now under threat.

The South American market just outside Seven Sisters station, might not look like the most glamorous place but what makes it special is what it means to its community.

“People that have left their families far away come here because they receive love, support and generosity. This is a unique place where I can guarantee you that if you are hungry someone will give you food regardless if you have money or not,” says Venezuelan journalist, Pedro Velasquez.

I have heard about Pueblito Paisa before but I have never had the chance to experience it – but as soon as I step into the market Pedro’s words made much more sense.

The loud music, family gatherings, children playing, people laughing and talking in Spanish felt like I was visiting a little village in the outskirts of Medellin, Colombia, where everyone knew each other.

The mouthwatering smell of the home cooked Colombian street food made the scenario even more characteristic. 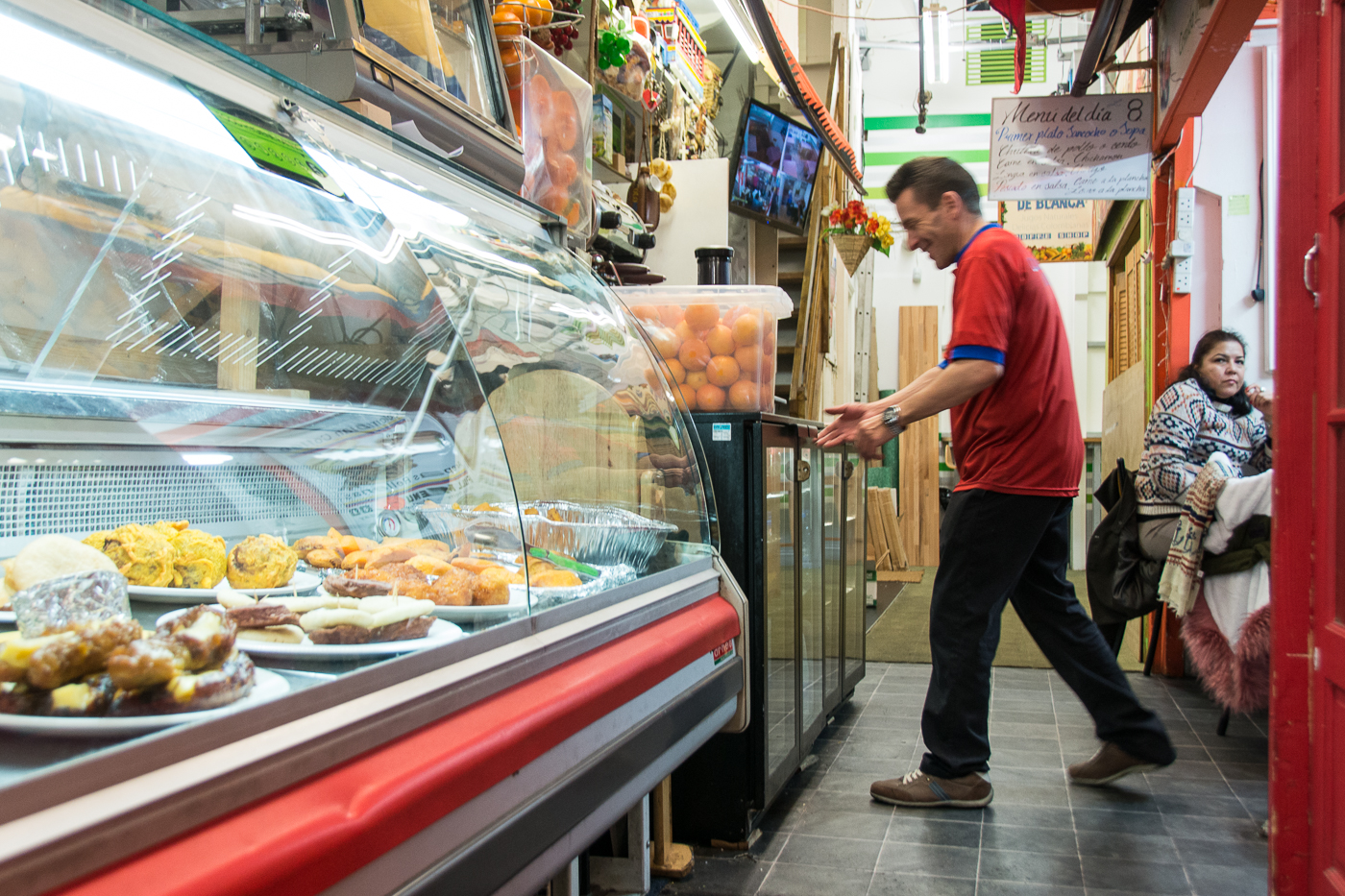 One of the Colombian restaurants in Seven Sisters market [Chelin Miller]

Strolling by the stalls selling many kinds of traditional products, Pedro and I chose the “quietest” café in which to have a chat.

Despite the laughs and jokes about me trying to pay for the coffee that Pedro very insistently wanted to offer me I could see that something was bothering him.

The colour and music of the market is at risk of being replaced with a grey block of luxury flats.

Seven Sisters, like many other areas in London is going through a process that is seeing neglected areas completely transformed into more modern neighbourhoods, where chain stores and residential towers replace small independent businesses.

Behind these developments are big wealthy companies which are able to invest a surreal amount of money that they say won’t only benefit their own income but will also improve the economy of the country.

In this case of Seven Sisters, Haringey Council chose to give the property developer Grainger the task of reshaping the area.

As part of the plan, the development company will invest £65 million into a demolition and reconstruction plan of the Wards Corner site in which Pueblito Paisa is located.

Grainger argue that the scheme will provide much needed community benefits which include new homes, hundreds of jobs, high street shops and a new market and they have been granted planning permission.

However, the local community has its own plan which has also been approved. The alternative project includes cultural activities such as workshops, performances and an art gallery.

The company knows that the opposition of the community might affect the resolution of its scheme and often organises meetings with the local traders to try to find some a sort of common ground.

These meetings often fail as both sides struggle to understand each other; language is not the only obstacle, opposing values and interests also constitute a real barrier.

The community says it very clearly: money doesn’t matter; money won’t be enough to fill the void that destroying the market will create. What really matters is to them is to keep the community alive.

They also argue that for Grainger the economic outcome is the priority: ”The developers don’t care about us. It’s obvious!” Pedro says.

Haringey Council sees more benefits in the Grainger plan and applied for a Compulsory Purchase Order (CPO) to support it.

The developer doesn’t own all of the land that it would need to complete its scheme and the CPO would give them what they need – with a CPO you can legally take over land or a property without the consent of the owner.

If that is approved, the community will not be able to stay.

What could save them is a public enquiry that would review what would be the best solution for the public. Grainger and Haringey say that they remain committed to wanting to reach a negotiated settlement with the remaining land owners and tenants.

The residents have a clear idea of what would be in people’s interest.

“There is no need to demolish the market. This is a multicultural hub and with a bit of an open mind this could become a touristic attraction,” says Pamela Isherwood, who represents the Wards Corner Community Coalition (WCCC) and the ‘Development Trust’ which presented the alternative community plan.

This project was very successful and it had promises of funding. Development Trust director, Carlos Burgos clarified that what made it successful was the human factor that is lacking in the developer plan.

“Theirs will be buildings without soul. These two realities will never integrate but they will stay always separated. This situation makes me think of Rio de Janeiro where you see the favelas on one side and the rich buildings on the other,” he told us.

After my coffee with Pedro, he introduced me to his colleague Marta Hinestroza, a lawyer specialising in human rights. She was forced to leave her country, Colombia, by the civil war there.

Pedro is a journalist and an English teacher from Venezuela who has been living in many countries and decided to come to London to discover a different side of the world.

The two set up a consultation service in the market for people who can’t speak English and need support even for the simplest things such as going to the doctor or renting a room. 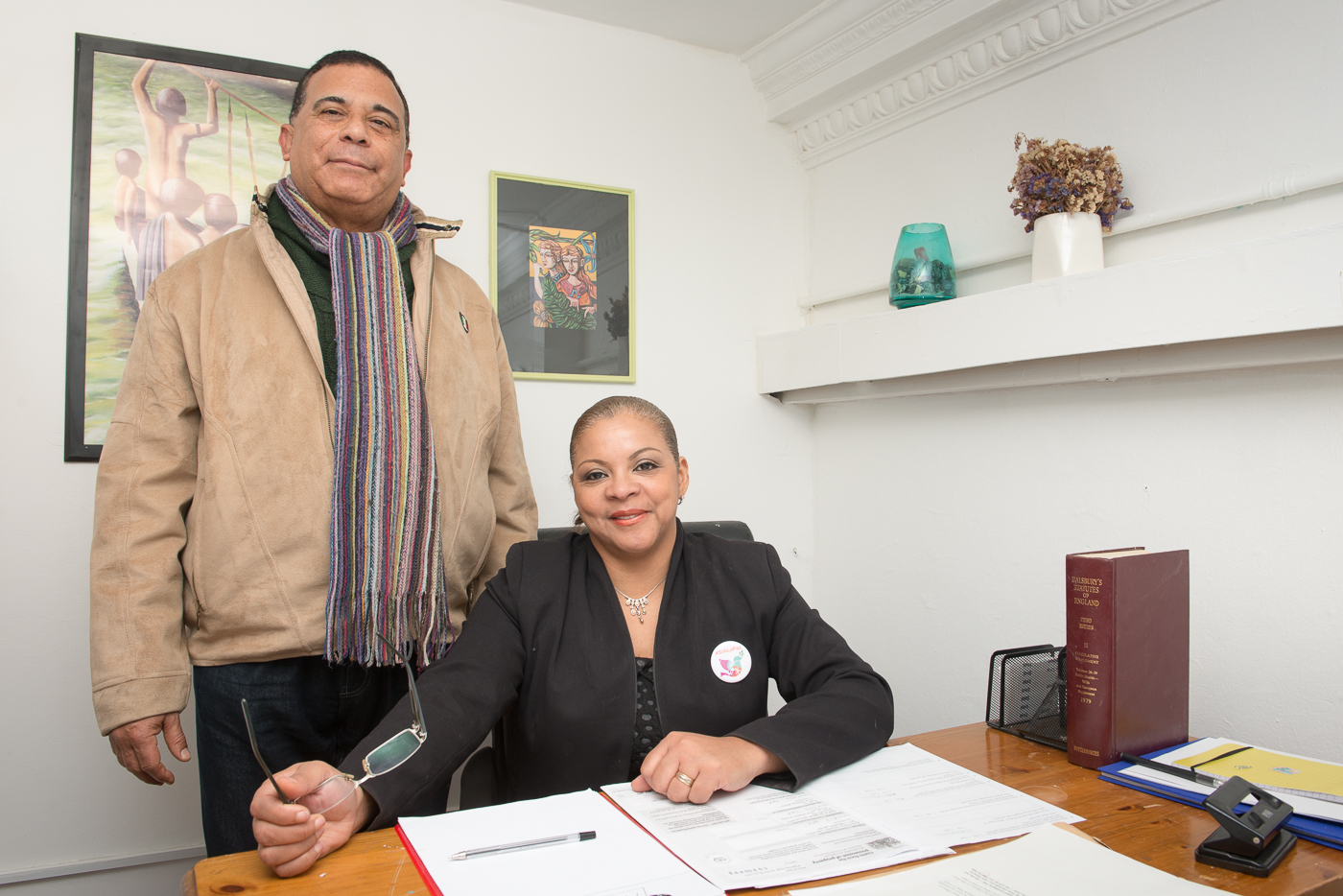 Marta Hinestroza and Pedro Velazquez in their office [Chelin Miller]

Many Latin Americans struggle to learn the language because they are forced to do low skilled and low-paid jobs that don’t require them to communicate Marta explains.

“They combine up to four or five different jobs to be able to survive. They wake up at three or four o’clock in the morning and then they have also daily jobs. After working so hard, it’s difficult to have the time and the fresh mind to be able to learn a language.”

Help is not only restricted to the Latin American community but it’s available to everyone as Pedro says: “The market is a symbol of diversity because this is not only a place for Hispanic people but brings together other communities. It’s a cultural and economic refuge mostly for defenceless people.”

Colombian president Juan Manuel Santos also understood the social importance of this market. In his recent visit to the UK he spoke to Marta who explained to him the situation of Pueblito Paisa.

He showed his willingness to help by involving the Colombian Embassy and Consulate in the matter, and the community hopes this political intervention could be enough to save them.

“There is no need to demolish the market. This is a multicultural hub and with a bit of an open mind this could become a touristic attraction”

In previous years, a political promise of saving the market was made by Boris Johnson who in 2012 when he was still mayor of London, expressed his intention to keep it intact.

Jonathan Kiddle, the development manager of Grainger explains that following that agreement, the traders that were there at the time are entitled to temporary rent reductions.

Deductions that might not be enough to save even few traders, as Grainger can’t predict how much the rent will increase.

Rent for the community of Pueblito Paisa used to be very low as when they took in in 2000, it was very neglected and no one wanted to take care of it, and the official owner, Transport for London (TfL) left it abandoned for many years.

Two Colombian cousins Oscar Giraldo and Francisco Restrepo, saw potential in the space and invited friends and family to join them in the market to start their businesses.

This spontaneous way in which Pueblito Paisa was formed contributed to the strong sense of community and is what differentiates the Latin American community in Seven Sisters from the one in Elephant & Castle.

“In the Elephant & Castle estate agents asked the Latin American community to take over the empty space of the shopping centre and people didn’t necessarily previously knew each other like in the case of Seven Sisters market,” Carlos explains.

“In Elephant & Castle the objective was economic whereas in Pueblito Paisa was mostly social,” he adds.

Invisibility is what the communities have in common say Lorena Raigoso and Veronica Posada.

This issue was what prompted two Colombian MA students, Veronica Posada and Lorena Raigoso, who recently moved to London and started a project, ‘Mapping Memories’, to help the community to be no longer ignored.

“We wanted to help the community to become more visible and not be displaced from the areas where they settled,” they said. 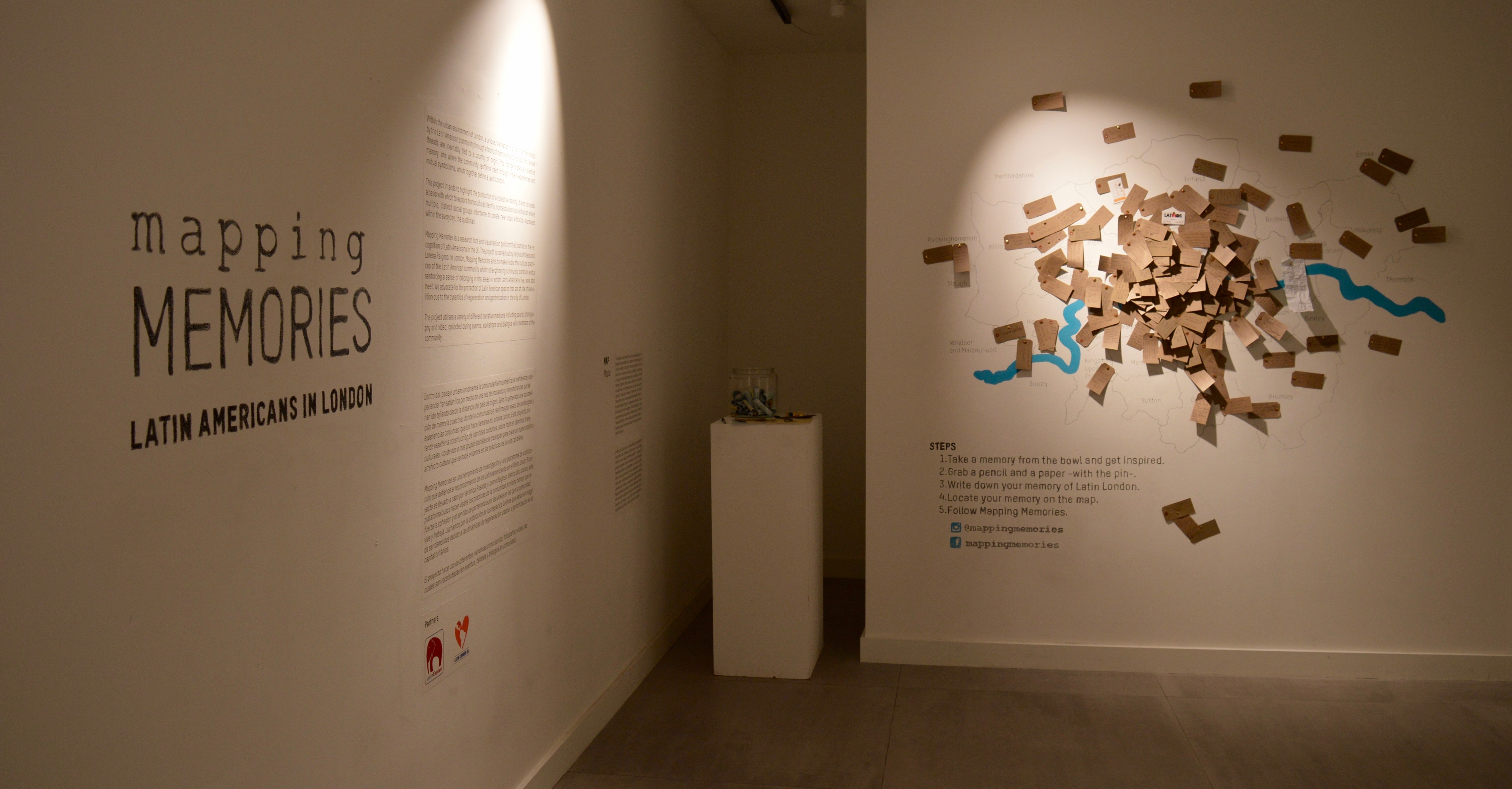 In the case of Seven Sisters in particular, lack of recognition is highlighted by the fact that Haringey Council refused to recognise the Latin American community as an ethnic minority.

Carlos believes that discrimination and racism are at the base of the decision to demolish the market: “In the first meeting between Grainger and the market’s community, the developer told them that they didn’t have any rights and moving should not be a problem for them as they do it all the time.”

Pedro also agrees with this view and says: “The cruel reality behind the demolition of this site is an ethnic cleansing. Brexit is a great example of this attitude, people are afraid of immigrants and want to get rid of them.”

Klearjos Papanicolaou, who made a documentary about Pueblito Paisa called Seven Sisters Indoor Market also thinks that the demolition of the market is a reflection of the actual political situation.

“In our conservative times, there is a vision of the city backed by the financial sector and political elite – a neo-liberal gentrification exploiting the value of space in London.”

Gentrification might be financially beneficial for some but definitely not for the community of Pueblito Paisa who made of the little market their home.

This is one of many multicultural hubs that made London a place like no other. Losing them would mean losing London’s uniqueness says Lorena.

“Before coming here, I had an idea of London as a city of multiculturalism but when I moved here, it wasn’t what I expected. London is still multicultural but not as it used to be. It’s not a place where many people want to stay. It’s a place where people come, work and then leave.”