Sports at an arts university?

It’s a Wednesday night and while most students are at home doing uni work (or procrastinating), a not-so small group of UAL students are out to party – these people are part of UAL Sport and are out for their weekly sport socials.

Through loud laughs and parallel conversations, someone chants ‘Oh when the Arts’ and within seconds the entire group has joined in.

Most people are surprised when they find out that UAL has sports teams: “Because we’re an arts uni people don’t expect us to have sports teams. People don’t know about us but they should,” says Shaq Mayanja, president of the men’s basketball team.

With almost 900 paid members this year, UAL Sport continues to grow each year but it is still unfamiliar to most students.

“I don’t even think we make 10 per cent of the uni and every time I go up to someone they’re like ‘Oh, sports. Didn’t know we did that’, which is rubbish. I wish more people knew about it because it’s so much fun,” says UAL Sport’s president, Hollie Melding.

She started with the cheerleading team and decided to join because “everyone was so nice and it was such a nice atmosphere”; now in her third year on sport she is in charge of the organisation which covers all the sports teams.

“It’s quite hard work. It’s nice to try and make it better and well known. I’ve got a great team behind me so it’s really fun,” Melding says. 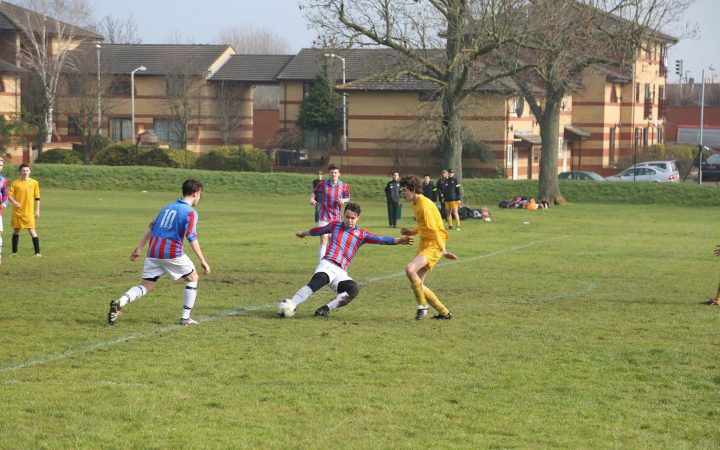 Being in a sports team can make your university experience much better: “There’s no other way you can meet so many people on different courses on so many years,” says Leah Kahn, the Students’ Union Activities Officer who is also on her sixth year on UAL Sport.

“You just make the best friends and get fit at the same time and it’s great to relieve stress when you’re working or have deadlines. It’s such a good way to let off steam.”

Every Wednesday students who play sports are involved in matches against other university teams. That is one of the reasons why BA courses are not allowed to schedule any lessons on those afternoons.

The games are organised by British Universities & College Sport (BUCS) to help support students in sport. The teams work hard every week to win their games and it shows on their results.

The women’s hockey second team was undefeated last year and moved up a league, which shows the commitment that students put towards their teams and training.

The main reason why people choose to join a club is to meet people from different courses: “You’re away from home and don’t know anybody and suddenly you’re shoved into this great atmosphere of people and they’re all there for you,” Hollie says with a smile on her face.

She says that if she hadn’t joined her university experience would be very different: “I would have a lot less friends,” she continues. “Everyone I live with is on sport. All my best friends are on sport. I really can’t imagine just going to uni everyday. It would suck.”

Hollie isn’t the only one who feels this way. Leah says that sport has enhanced her UAL experience: “I wouldn’t be sitting where I’m sitting. I wouldn’t have finished Textiles Design if it weren’t for sport.”

To Shaq the best part of being in a sport is “making all these connections and all these friends”.

“Everyone is so friendly,” Hollie continues. “We have so much fun together and it’s nice to know people and be part of something.”

One of the biggest events within UAL Sport is Varsity where the sports clubs play against the Goldsmiths University teams.

[pullquote align=”right”]“All my best friends are on sport. I really can’t imagine just going to uni everyday. It would suck.”[/pullquote]Each game win counts as a point. Last year UAL lost by one game, but the year before had beaten Goldsmiths 11-4. Last year’s loss hasn’t taken away their pride as they are ready to take the cup home again this year.

At Varsity all the members from different sports can be seen representing the university’s colours: pink and blue. All throughout the day the different clubs will support each other at their matches.

At some point someone will shout ‘Who are we?’ to which everyone will reply at the top of their lungs ‘Pink and blue!’ followed by ‘What are we?’ and an even louder ‘Better than you!’ And this goes on until their voices are hoarse.

“The students that are on UAL Sport have this pride that comes to wearing the crest and representing UAL,” Leah says.

At the end of the academic year UAL Sport organises the Sports Ball. This is the time when the members get dressed up and celebrate the accomplishments of the community.

Clubs are able to put their names up for Club of the Year; the most important award a club can receive, and hope that their achievements were enough for them to take the award home.

Some people might argue that joining a sport could end up being a distraction from university work. With training and games every week, it can seem like a greater workload to put on top of a degree.

Shaq disagrees: “Most people keep asking how [I] manage to do uni and do sports. You just have to schedule it really. If you put everything in the right place then you can do both.” He has been in sport since his first year when he joined football. “When basketball started up again I gave that a go. Now I’m president which is a big step.”

The men’s basketball team has gone through a few rough patches for the last two years. Last year the team didn’t have a lot of members, which made playing against other teams hard. The team even had to forfeit their game at Varsity due to lack of players.

In the last few years UAL Sport has recieved more publicity within the university. “There’s improvements being made within UAL,” Leah says when asked about how the university has been helping. “We’ve got a sport working group with deans from different colleges to discuss sport and how we can make sport more prominent in the colleges.” 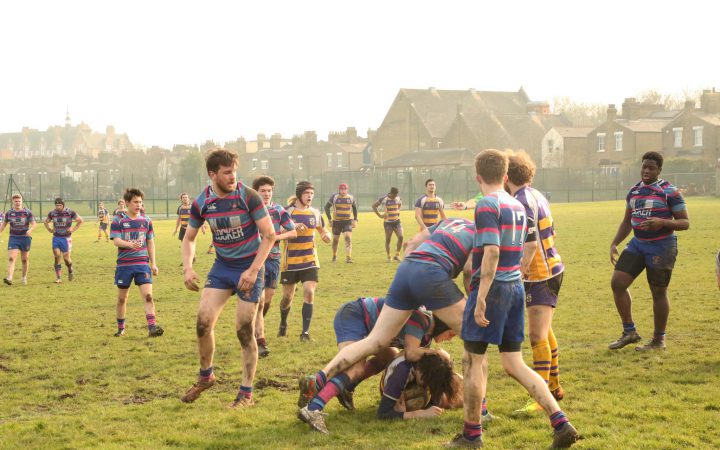 The rugby team working hard for a win at Varsity

At Freshers’ Fair the clubs each have their own tables where they get to show incoming students what their sport has to offer. Most times students just walk straight past the sport area, but the few that choose to check out the teams have a long list to choose from.

The clubs go from traditional ones such as rugby and netball to less expected ones like surf and tai chi.

“It’s gotten a lot bigger and a lot more diverse and inclusive,” says Leah. “When I joined it was more just the main teams as part of UAL Sport. You had the football, you had hockey, rugby, cheerleading, netball and that was the main UAL Sport and it was kind of like they were just content to just be UAL Sport. They were quite small and not very known.”

Now as Activities Officer Leah is able to help the sports clubs become more familiar to students across the different colleges.

“I felt that UAL Sport can be so much bigger and so much better,” she continues. “There just needs to be someone in the SU who has come up from sport and understands the issues we face and be able to know how to make it better.”

One thing that scares people away from trying out a sport is lack of experience. “It’s not about results,” Leah says. “It’s more about the friends that you make and the experiences that you have and not about winning. Which is why it makes UAL Sport so unique.”

“Sport is so welcoming,” Leah continues. “You shouldn’t be scared.”

“We’ll take people till the end,” Hollie says when asked if people can join at any point in the year. “Join sport. Sport’s awesome!”

Interested in joining? Head on over to the Students’ Union website and find your (new) favourite sport. Or perhaps join the teams at their weekly Wednesday socials for a night of fancy dress.

By Natalia Zelazowska
11 Mins read
Boxing, like many martial arts, was once said to be a man’s thing. Today, however, there has been a shift…
AudioNews

By Rebecca Keen
2 Mins read
An article about the Stop the Oil protestors who caused distribution on the M25.