Once you see one art piece by Anna Laurini you suddenly start to see them everywhere.

Her artworks are unmissable throughout London and can be found in various locations but most of them are on the streets of Soho and alongside Brick Lane.

That’s why Brick Lane was the perfect place to meet the artist and find out more about her work.

On a cold winter day during lunch time, we sat in a newly opened Italian restaurant where one of Laurini’s paintings decorates the wall and had a lovely chat over a glass of red wine: “We are in London, it’s never too early for wine,” Laurini laughed.

She was born and raised in Milan, Italy, but has lived in London for the past 15 years, approximately the same time period as she has been doing art.

She was studying at Central Saint Martins and The Art Students League in New York.

Laurini started producing street art three years ago but she still sees herself as primarily a traditional artist: “My main medium is the canvas, my main environment is my studio,” she told Artefact.

For Laurini, the main difference between canvas and street art is the environment.

As she’s working on canvas paintings alone in her East London studio and when she is doing street art, she is surrounded by the chaos of city and the noise of the street: “It’s a different vibe and I like them both. In the city you got to be quick, it’s a very different energy.” 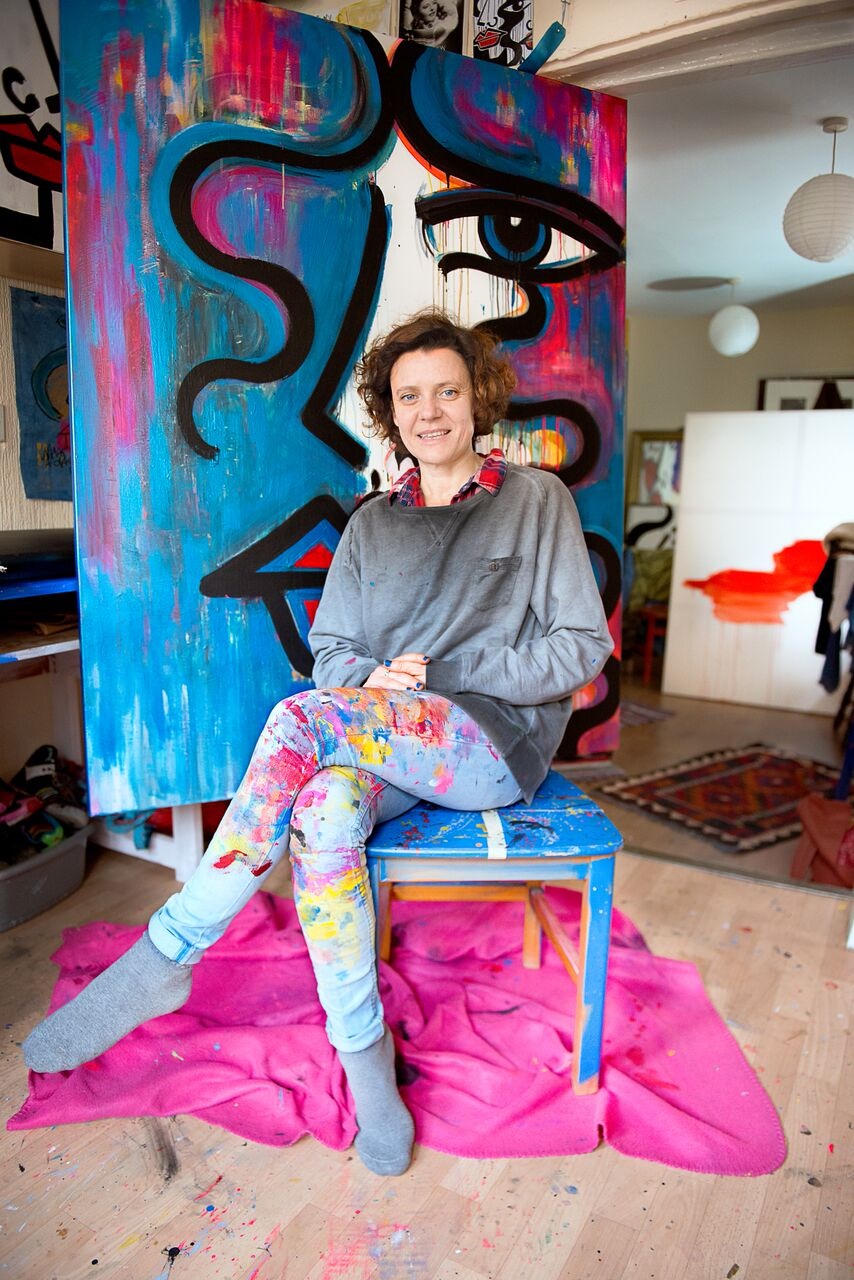 She thinks that London is a great city for a young artist to experiment and she would suggest it as a perfect place for someone who is about to start an art career.

This is an exciting period for Laurini as she has two major exhibitions coming up soon: in the Brick Lane Gallery and at Lights of Soho.

She is very excited for the show called Profiles, a collection of canvas and neon artworks at Lights of Soho, which is London’s well known light-art gallery.

She told us she will be using neon in her artworks for the first time.

Hamish Jenkinson, a curator at Lights of Soho said: “Anna Laurini has taken the technique of cubism and infused it with new meaning, giving the figures she portrays life. Her Picasso-esque style of paintings has become iconic in London as she has succeeded in painting nearly every street corner with her characterful faces.”

Another upcoming exhibition of Laurini’s work will be held at The Brick Lane Gallery in March.

The exhibition will be called Stay Human and will present her artwork through a collection of drawings and paintings as well as murals echoing surrounding neighbourhood of Brick Lane.

It will also feature her recognisable series called Faces. She said that there is no particular reason she’s doing Faces: “It’s just a scribble I started to do and carried on with it, it’s very automatic,” Laurini told us.

The Brick Lane Gallery director, Tony Taglianetti, told us that this will be the first time he’s exhibiting Laurini’s paintings: “Anna’s work is very visually distinctive, it’s work you can immediately recognise and relate to because it’s a human face.”

The Brick Lane Gallery is a contemporary fine art centre that presents an integrated programme of emerging and established artists from all artistic backgrounds: “My idea is to keep an eye open for artists that are making interesting projects in London and Anna is certainly one of them,” Taglianetti says.

Brick Lane is considered to be at the epicentre of street art in London so this is not the first time Taglianetti has hosted someone who is taking part in it – in 2009 he exhibited Banksy’s work in the gallery. 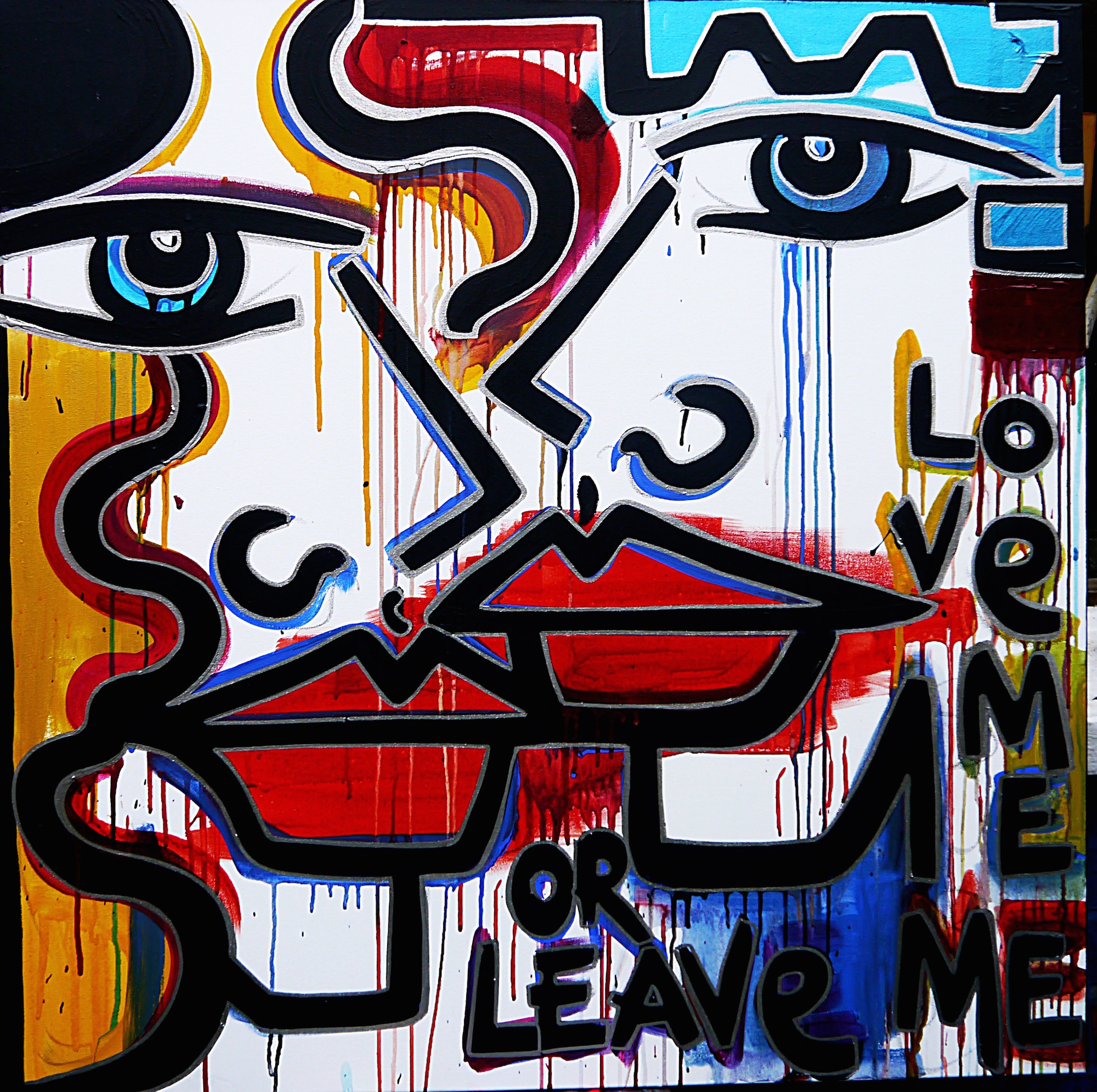 The secretive artist is one of the main inspirations for Laurini when she’s enhancing the streets: “I like him because I find him very socially aware and very original but my inspiration is my own emotion.”

She explained that although artists such as Banksy or Picasso stimulate her, her main inspiration is internal.

Laurini’s pieces of work are indeed emotional and personal; they are colourful and vibrant and they transmit a positive feeling.

Taglianetti, had also seen Laurini’s work before but wasn’t familiar with her name, but like many other Londoners, once he saw one, he started to see them everywhere.

“It’s very human, it’s very painterly and loose. It’s free and has a spirit. Even though it’s street art, it looks quite traditionally at the same time. It’s got that painterly effect like Picasso would have or a Matisse drawing,” Taglianetti told Artefact.

When you walk in Brick Lane, it’s impossible to miss Laurini’s beautiful piece Red Lips Lady standing next to the entrance of a fashion boutique 127.

Elisa Pensa, the owner of the shop told us: “I love Anna’s work because it’s a strong, positive, ironical and contemporary reflection of today’s independent thought. She doesn’t belong to anybody except to the streets of this world and street is life.”

Except in London, although Laurini is also working in New York, Milan and Paris.

She likes those cities equally although she says that New York can be quite tricky as the rules are stricter: “London is more relaxed especially in some areas like Shoreditch. Street art is business here,” she told us.

Laurini says her aim in life is led by the motto “all good things are wild and free” and that is also a quote that accompanies some of her art pieces. 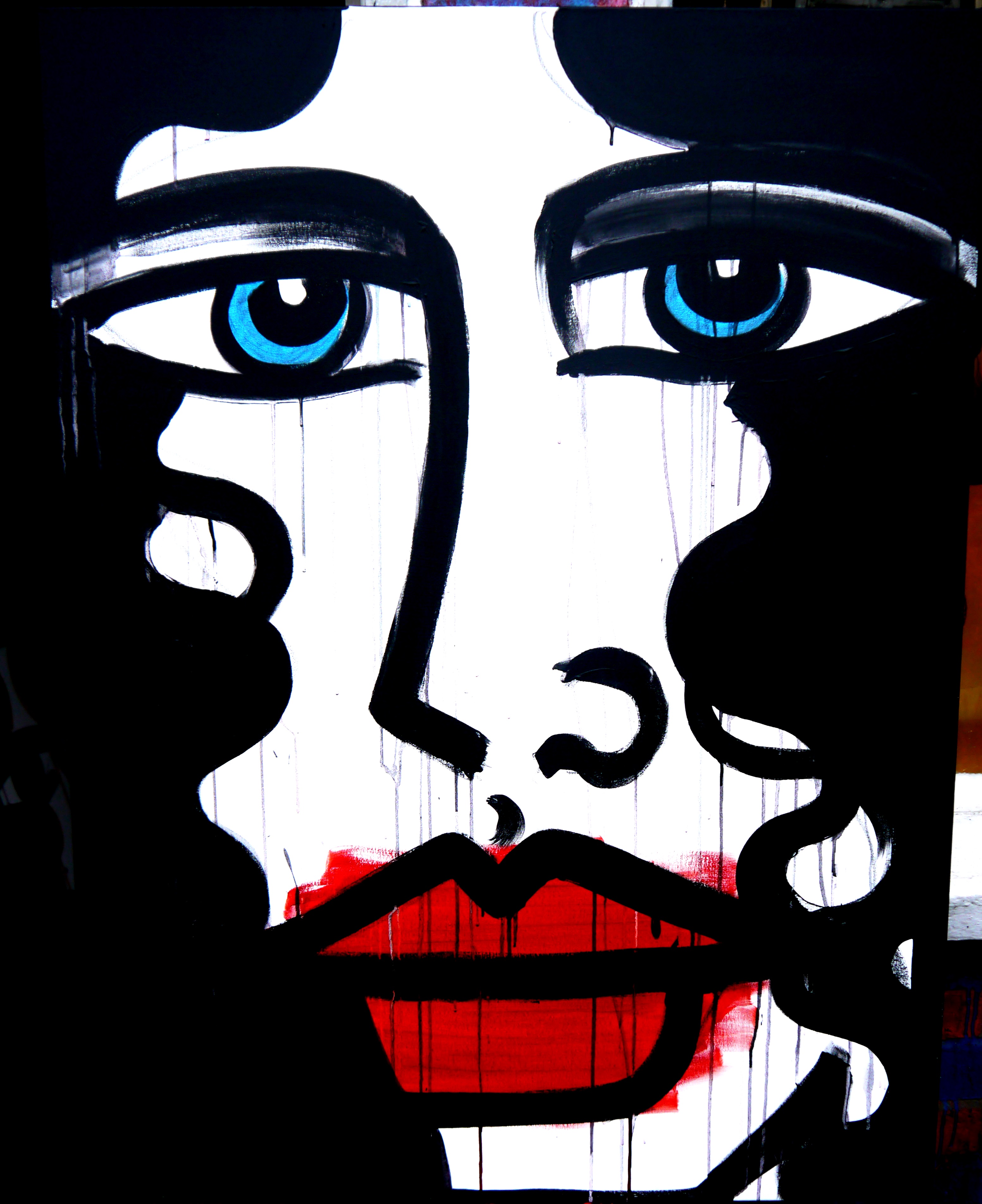 When I asked her about using quotes in her work she told me that because the images are similar she wanted to catch attention from people by using different tools: “Because I’m not very verbal they are not mine, I take them from various writers and philosophers.”

Since she’s a female artist and men dominate the art world, especially street art, our conversation did move into issues of gender: “Whatever kind of art you make it will be labelled feminine,” say Guerilla Girls, an anonymous group of radical feminist artists based in New York.

Laurini agrees that men dominate art but she thinks it doesn’t apply only to art: “All the world is still dominated by men, not just art.”

She thinks that art shouldn’t be evaluated in the terms of gender but since we live in the society that remains sexist, that’s not the case.

When I asked her about the message she is trying to convey with her work she said: “I’m trying to be empowering with my work. We need to be more conscious and to re-discover our own quality without being manipulated by the society.”

Don’t miss the chance to see her upcoming exhibitions: