The Most Excellent Order of the British Empire is an honour most people are happy to accept but when those who are chosen decline, the reasons may be more common than expected.

At the end of each year, an honours committee come together on behalf of the Queen to decide which individuals should have their lifetime achievements celebrated.

The celebration of their work is demonstrated with a medal and one of six Most Excellent Order of the British Empire titles: BEM, MBE, OBE, CBE, Knight or Dame and the highest honour, Companion of Honour. 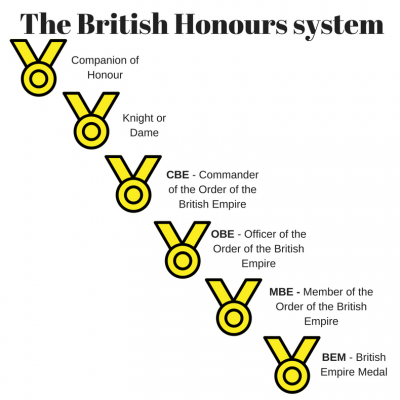 First established by King George V in 1917, the honours list is recognised twice a year in the New Year’s Honours and the Queen’s Birthday Honours in June.

Those mentioned on the New Year’s Honours list often include well known sports personalities, fashion designers and exceptional charity workers and in 2017 there were no exceptions.

From Sir Mo Farah, who received a knighthood for his services to sports to James Bond actress, Naomie Harris, who became a CBE for her services to drama, being considered for an honour is no easy task.

In order to first be considered for one of the six honours, an individual must first have “made achievements in public life or committed themselves to serving and helping Britain”.

The individual must then meet the Queen’s honour criteria.

Lastly, an honours committee will then decided if a person is worthy of the honour.

However, while most people accept the honour, there are more than 300 people who have respectfully declined the title and medal.

Best known for her role as presenter of Watchdog, Faulds, who is a survivor of cancer declined an MBE stating that the honour system needed to be dragged “into the 21st Century”, according to the BBC.

“I would love to have an honour if it didn’t have the word ‘empire’ on the end of it. We don’t have an empire, in my opinion,” she later added.

Other honourees to turn down the honour in recognition of their work also include the late David Bowie, author Roald Dahl and director, Frankie Boyle.

Writing on his Facebook page, Gayle stated that his ancestors would be “turning in their graves after how Empire and Colonialism had enslaved them” and for those reasons, would not accept the honour.

Fewer people, however, have returned the honour as the co-founder of The Beatles, John Lennon, in 1969, did for his rejection of Britain’s foreign policy.

Other have also declined due to the removal of funding from specific fields of research and its encouragement of a class divide, which is seen as outdated and offensive.

Speaking with my godfather and founder of charity Making the Leap, Tunde Banjoko, who accepted an OBE in the 2008 Birthday Honours List for his ‘services to training and employment in London’, I decided to find out why, unlike others, he had decided to accept the honour. 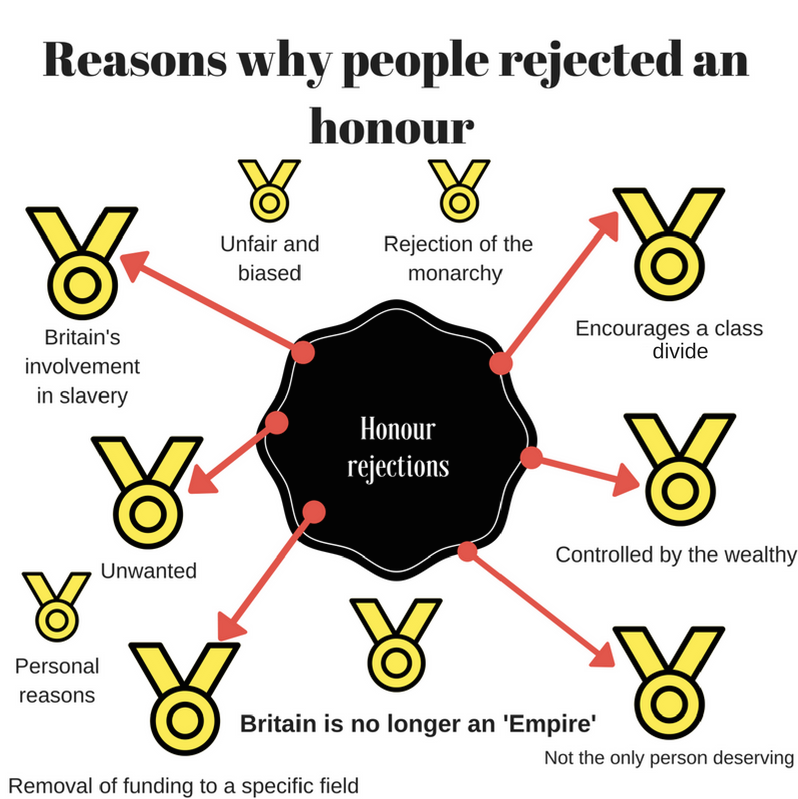 “The fact that I was nominated for the honour meant that someone had thought the work that I had done within the charity, Making The Leap, was worthy and had added value,” he said.

The individual nominated must be chosen by a member of the British public who discusses with the Honours and Appointments Secretariat and fills in an official nomination document.

“I accepted the honour on behalf of the excellent colleagues that I have worked with for many years, because we have achieved what we have together, and I would have let them down had I not accepted,” Tunde later stated.

“Because there are many things about our former empire that I am uncomfortable with, I resolved to think of it as the “Order of British Excellence” instead and that helped me to come to terms with it.”

Since accepting the Order of British Excellence nine years ago, Tunde had no regrets about keeping the honour, stating: “To see the joy that it gave members of my family, my friends and my colleagues, I have no doubt that it was the right thing and I would do so again, if I was privileged enough to be awarded another honour.”