Last year the UK came 23rd in the United Nation’s World Happiness report, failing to make the Top 20 and dropping two places from the previous year.

Denmark won the top spot, making it “the happiest country in the world”. The country also held the title in 2013 and 2014 and its capital, Copenhagen, has been dubbed one of the happiest cities in the world by CNN.

So what better place for Artefact to cross the sea for in an attempt to beat the British weather blues?

At first instance, the voyage to happiness seemed promising. The passport security woman we encountered was bubbly and complimentary of the arrivals, even joking to one woman (who sported brown hair in her passport and blonde hair in person), “Congratulations on the change, blondes have more fun.” 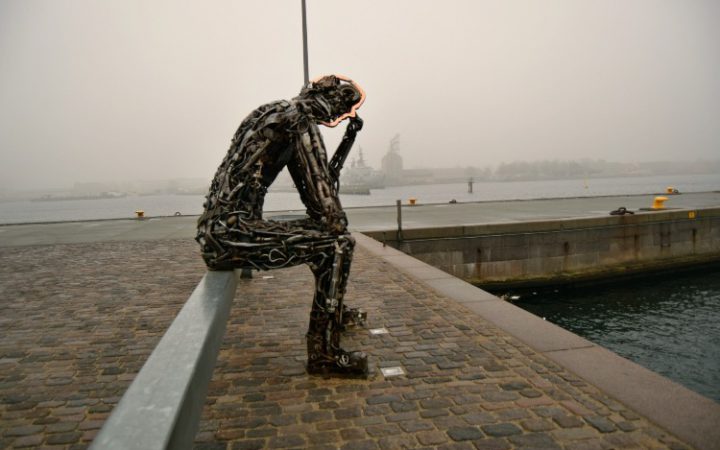 Perhaps she wasn’t too envious of the holidayers as Danish employees benefit from five weeks of holiday per year.

Having checked the weather forecast prior to our visit we were expecting a cold and cloudy weekend, what we were not expecting, however, was to feel like we had walked out of the airport and right into a Harry Potter movie. The air was eery, the sky was grey and the faces of the people surrounding us mirrored the atmosphere.

Fast forward to arriving at our hotel, settling down and looking for a place to eat.

Eventually, we decided on a cute little pizza place not too far from the Nyhavn harbour.

The hotel warned us that a lot of restaurants were likely to be full as it was a Friday night, however when we entered our chosen restaurant, Amarone, we noticed that there were a few empty tables so asked the waitress if we could eat in.

“How many?” She asked

She looked us both up and down, screwed up her face in disgust and said “no.”

No explanation, just a blunt refusal and a takeaway order of embarrassment for two. 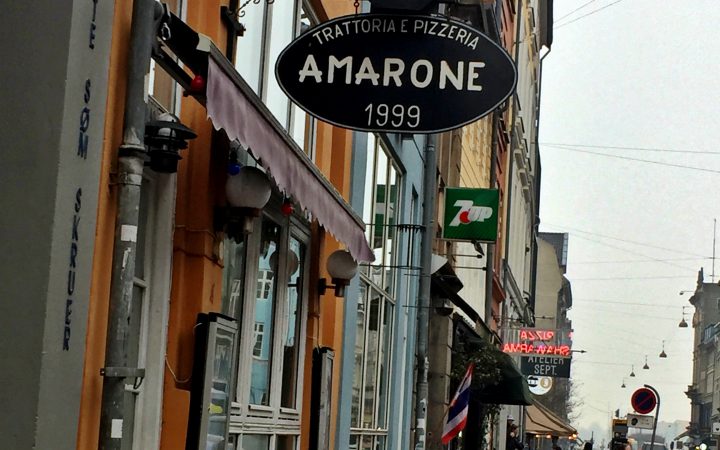 We later found out that we weren’t the only tourists to receive such hostile service, the following reviews were found on Trip Advisor:

“Do not go here. The food was ok but the waitress was incredibly rude – forced us to have a drink & never gave us our leftover change,” said user Katy J, who rated the restaurant one star.

“So unfriendly we left before even sitting down. I have no idea what makes the host so outrageously rude and I don’t care to find out either. There are many other options out there. I would guess he doesn’t like English speaking guests judging from how quickly his attitude went downhill.”

We opted to dine at the hotel instead and, in the words of Shania Twain, hoped that it could only go up from there.

Day 2: The Nyhavn harbour,  Strøget and eating out

Full of boats and colourful buildings, the Nyhavn harbour is a beautiful sight and there are plenty of restaurants with outdoor seating if you want to dine with a view.

During the colder days, some restaurants have blankets and heaters for customers who would like to eat outside. We can confirm it is a wonderful spot for lunch, although the food was mediocre and overpriced. It cost us £60 for what I can only compare to a standard pub lunch.

Be sure to take a second trip back to the harbour at night, when it’s quieter and simply stunning.

From the harbour, you can take an hour-long boat tour for only £5. We definitely recommend you do so, especially as we walked for 45 minutes trying (and failing) to find The Little Mermaid Landmark prior to deciding to take the tour. 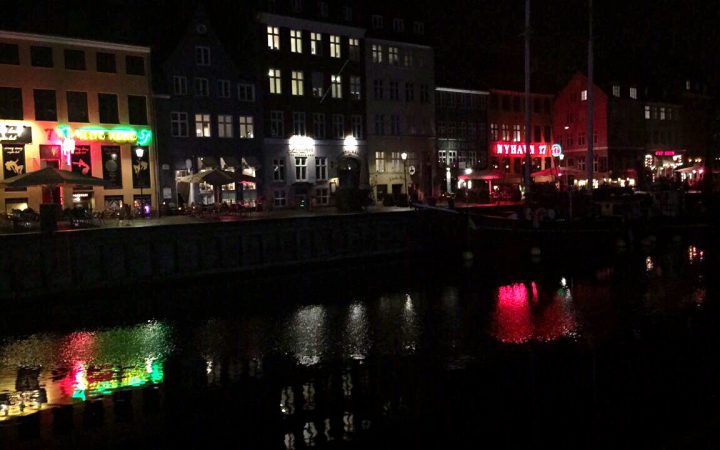 The tour guides are great and offer in-depth stories of the history of Copenhagen’s canals, buildings and landmarks. (Tip: if there’s space sit on the right side of the boat, that’s where most of the sights are).

If at any point you’re stuck on how to spend your time, the centre has a really handy spinning wheel with activity suggestions on.

The wheel is located right after the harbour’s closest metro station, Kongens Nytorv, and just before you reach the harbour itself. It’s labelled ‘Oases in Copenhagen’, but we nicknamed it the Wheel of Choice.

On our way to the Wheel of Choice, we bumped into Local resident, Carlos Ortiz, who migrated to Nyhavn three years ago from Gran Canaria.

Carlos laughed when Artefact asked him if he considered himself to be living in the happiest place.

He said, “To see a happy town, come in summer. This town is okay but with this weather, the people are as miserable as that grey sky you see. In summer people are happy, tourists are happy. Everyone is happy. 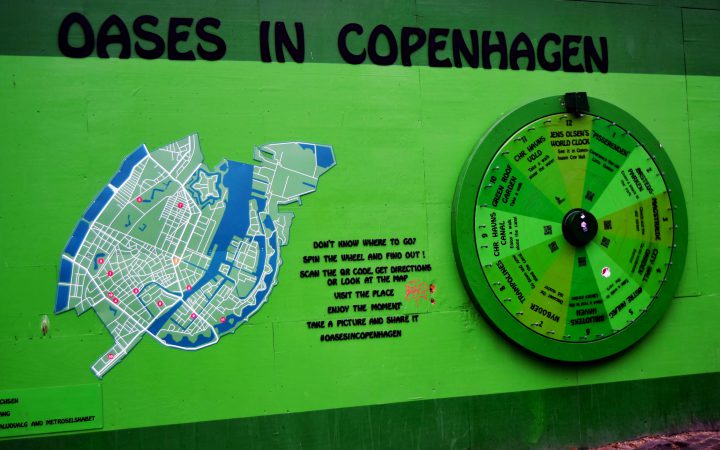 The Wheel of Choice: Located right next to the harbour, a spin of this wheel will suggest how you spend your day

“It’s definitely not happier than my hometown. I guess that we do have a good work and life balance here compared to some places though. I know [different aspects] are involved in [measuring happiness], but I don’t know why they say that. Maybe because that’s a selling point for it. And it sells, well it brought you here didn’t it?”

Later on in the day, the buskers and performers on Strøget had us feeling like we were in a movie again, (but this time more like a rom-com or a light-hearted comedy) the kind of movie where your mood has been lifted by the end and you feel inspired.

Strøget is Copenhagen’s shopping area, and one of the longest pedestrian streets in Europe.

Mama Rosa, located along Strøget, made for a far better dinner choice than Amarone. The food was both well-priced and absolutely delicious and the staff were funny, kind and helpful. The restaurant also has fire heaters both indoors and out.

Day 3: The Carlsberg Brewery, Tivoli Gardens and the City Hall

We came across Copenhagen City Hall by accident, actually on our way to Tivoli Gardens. Tivoli Gardens is the world’s second oldest theme park and has a delightful mix of rides, including a virtual reality experience, performances and attractions, making it suitable for kids and adults alike. 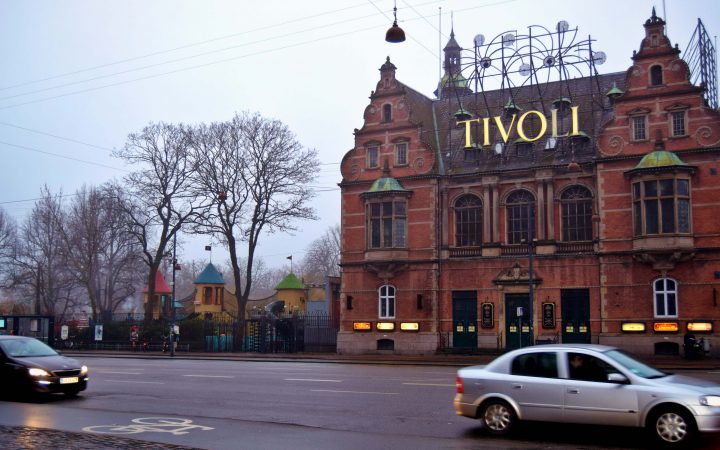 Unfortunately, the gardens were closed when we were in the city. They re-open on April 6.

The City Hall is located opposite the gardens and is hard to miss – at 105.6 metres tall, it is one of the tallest buildings in Copenhagen. From its tower (approx. 300 steps from the sidewalk and up to the tower) you can get a good view of the inner city and Tivoli Gardens.

Tip: When walking around the city be careful not to get in the way of cyclists. Unlike in the UK, the Danish cyclists have half of the pavement allocated to them as well as a path on the road.

According to a Danish report: “In Copenhagen, 50 per cent of all citizens commute by bike every day and there are more bikes than inhabitants.” And just like how Londoners get frustrated when tourists walk extremely slowly at tube stations, the Danish cyclists are understandably not the biggest fans of tourists standing too close to the bike lanes.

Another great place to visit is the Carlsberg brewery and if you are a student they offer discounted rates too.

On the experience route you will come across the Carlsberg bottle collection room, an exhibition explaining the history of Carlsberg, a sculpture garden (which includes The Little Mermaid’s Sister),  their horse stables and the bar and shop. 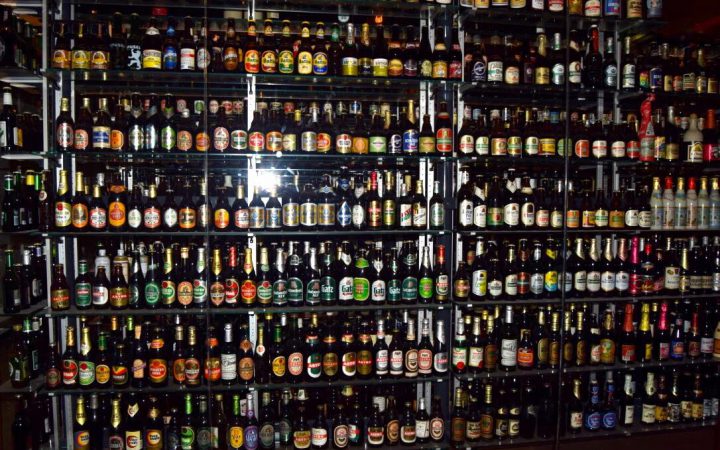 Carlsberg has over 20,000 different shapes and designs of unopened bottles – the largest collection in the world

During our stay in Nyhavn, Copenhagen, there was a general theme of disappointment in the air. Perhaps we set our expectations far too high.

We also noticed that, in contrast to London, the locals seemed to stare a lot – we are use to sharing a tube with people who stare at the same tube advert for all seven stops in a bid to avoid eye contact with the person opposite them.

Verdict: If you visit without the expectations of it being a super happy location that will have you singing and dancing by the end of your trip, you’ll really enjoy it.

We would visit again, just not Amarone. That place is on our blacklist. 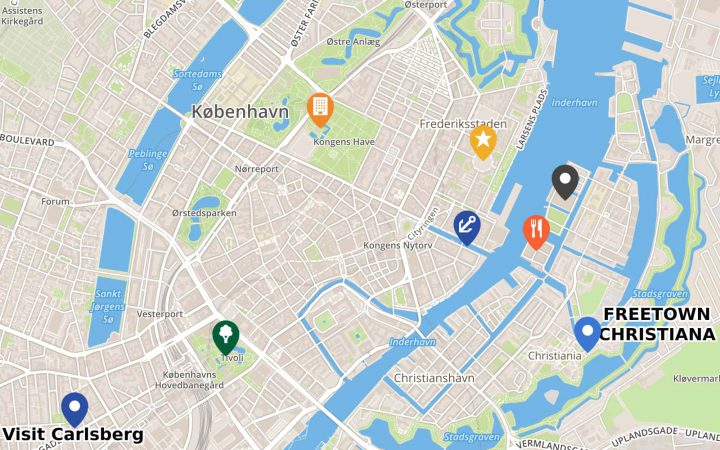 See the map to the right for a preview of Artefact’s selected “happy spots” in Copenhagen and click here to read the descriptions of the picks.

Interactive map and all images by Tyisha Maynard-Outing

By Emma Jepsen
6 Mins read
Danish design is having its media moment, we talk to the founder of the cult danish jewellery store Handcraftedcph about their online branding, presence and success.
Travel

By Lydia Tsiouva
10 Mins read
Exploring how living with less could be the secret to achieving true happiness by focusing on what’s important and minimising wastage.