The future of Brixton

The changes brought about by the regeneration of Brixton have been aptly epitomised in the poem Not my business by the African poet Nidi Osundare, which speaks on the two adversaries: comfort and responsibility.

The piece paints a powerful and contemporary portrayal of our own world as it might have appeared to those reading it back in 1993.

‘What business of mine is it
So long they don’t take the yam
From my savouring mouth?’

Nidi Osundare writes in a tone of a careless observer, or in fact, has not much power to change what he sees.

Just like the prose expounds on the poignant effect of the gentrification of an area, where members of a poverty-stricken society are removed in front of their neighbours while others remain unconcerned as long as they have the “yam” (African vegetable) to comfort them.

Though the author warns about the danger of minding our own business for the sake of ignoring the problem, as the same can happen to us and others, even if they are just minding their own business.

Making a way for privileged members of the society at the expense of poorer ones has been a central dispute in the attempt to ‘regenerate’ the Brixton via the Future Brixton strategy.

“The theory of the regeneration was to benefit the local people. In the ideal world, if you’re making the region better, its for the people that reside in there,” said Stuart Horwood, the CEO of Brixton Traders’ Federation CIC and a trader in Brixton market since 1984.

“However, all the low-income families that live here are being eased out at the remarkable rate, as in most London places now,” he told us.

[pullquote align=”right”]“The area is getting slowly sterilised, and I guess the more comfortable members of the society will benefit from the transformations”[/pullquote]

At first glance the transformation prospective looked bright and promising, particularly to youngsters and newcomers.

For the technology-savvy generation that mostly do their shopping online, the idea of change seemed like an optimistic step forward.

The redevelopments metamorphosed the region into an edgy ‘new Shoreditch’ of South London, which lures in visitors with its quirky night-life and can’t-get-anywhere-else fresh and exotic groceries sold by Caribbean, African and Asian traders.

Only a decade ago, due to humanitarian stigmas and the lack of attention from authorities, the area was often compared to the wild west, accompanied by the grimness that goes hand-in-hand with class A drug dealing.

Not only was it unsafe during the nighttime, but most importantly, the prominent grocery centre was a chiefly known by the police as a ’24-hour crack supermarket.’

“I am originally from the north-west of England. I would come here with my family just to get the type of stuff you couldn’t get from Chester like certain vegetables, types of meat and fishes. Alas, a lot of that is slowly disappearing,” Shepherd Sheunesu told Artefact.

“Now with distinctive changes, you see more gym, clubs and pizza places appearing out of nowhere. It’s like a completely new neighbourhood, a new trend. It’s a double-edged sword: it’s a good place to visit. We travelled specifically from Kingston for a day in [Brixton].”

On the other hand, for people who base their livelihoods in Brixton, the thought of the regeneration brought a wave of scepticism and fears.

Many believed that the so-called regeneration is a cruel attempt to alter the distinct sites that are built on the ethnic-minority ambience.

The old council-flats that were built originally for the low-income families that reside in Brixton will fuse with the rest of the London’s high-price property regions, following by the surge of the cost of living to an unprecedented scale.

As Brixton’s community apprehensions shot up so has the desire of the major chain companies and real estate investors to gentrify the district.

“I lived in South London my whole life, when there were a lot more social problems here. It was rougher, a lot of people considered Brixton a no-go area,” said Thom, a sales assistant at Shaw shop in Brixton Village.

[pullquote align=”right”]“Is it for the benefit  of richer “whiter” people who are moving in? That’s what makes people angry”[/pullquote]

“When the area is gentrified or regenerated, perhaps it’s for the best with less crime, street lighting, things get cleaned up to a certain extent. After few decades of social problems with the communities being ignored, then suddenly people do things about it, which is to do with the money.”

“What the long-term residents would say. Why wasn’t this done 20 years ago? Who is it suddenly for the benefit of?

A Facebook group Reclaim: Brixton conducted a survey to testify the scale of popular perceptions of the community on the latest changes.

Interestingly enough, there was no major statistical difference amongst respondents who voted to stop forcing trader tenants out of Brixton Arches and preserving an already existing enterprises such as Pop Brixton.

The Pop Brixton through a community’s initiative has transformed a disused plot of land into a pioneering space that showcases the most exciting independent businesses from Brixton and Lambeth. Yet, during its short period of existence, the opinions of indigenous community has split in two; for some it has become a social-hub and for others an epitomising reminder of an on-going gentrification. 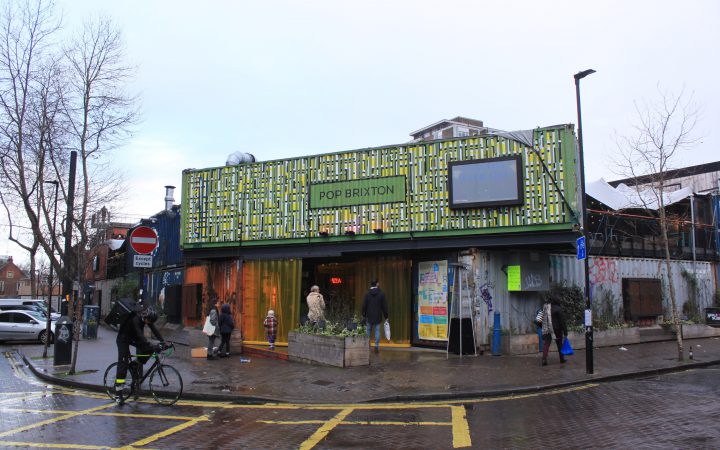 Evidently, the strongest difference in respondents’ opinions occurred in the question of quantifying and contrasting the worth of Brixton Arches and Pop Brixton.

The grey area was highlighted in the existence of Pop Brixton which sits somewhere between being “an inclusive social enterprise” or “an unwelcome symbol of Brixton’s gentrification.”

Conversely, the Brixton Arches are widely viewed as a “bread and butter of the area,” bringing the cultural and commercial value in the words of the long-life residents.

The findings supported by the interviews demonstrate negative connotations of respondents on the belief that the intentions of Lambeth Council to “improve the attractiveness of the area,” meant in reality freeing up the space for more investment-worthy companies.

As one of the interviewees put it: “There’s no attempt been made to even allow those spaces to be used for community groups or exhibitions, there’s all these empty shops.”

Looking back at the Council’s earliest pledges, they guaranteed to “balance out the aspirations and priorities of the local people” in a submission on December 8 2014.

The two major landowners Lambeth Council and Network Rail along with engineering company AECOM and Fluid Architects consider Brixton Central as the number one investment-worthy area to commission.

During the series of workshops with locals, the main development principles were prioritised as the main following acts for the regeneration, some of them included requisites on affordable housing and work space along with preservation of culture and community.

In return, the Lambeth Council and Network Rial took on board the resident-proposed requests with additional promises on the side. Those included building 250 new homes with less than a half of them being affordable and creating a commercial space which would provide extra 500 jobs.

When it came to making good on those pledges, however, it seems the project commissioners had their own perception of the future of the Brixton Central, the home to independent market traders.

The railway arches beneath the Brixton station which for many decades supplied fishmongers, and carpet and grocery sellers metaphorically speaking crashed on their heads.

Under the veneer of improving the fabric and the structural integrity of the arches Network Rail gave few month to the shopkeepers to vacate the place, promising that they can return and trade there again at a discounted rate over seven years.

“What we really want to bring to Brixton is more small, local independent businesses that will complement what’s already there and encourage that rich diversity that is in the area,” said Digby Nicklin, Commercial Director at Network Rail.

“We recognise that Brixton is a very unique place in London and has a very diverse cultural mix, which is something we keen to preserve. That’s why we’ve gone to offer such a good package for tenants to return and in addition we made it very clear that we don’t want any chains coming in to take up their space.”

Though the returning part hasn’t been made to be easy for the indigenous traders who survived off their small businesses whole their lives.

They claim Network Rail tried to squeeze the money out the traders by increasing the rent for the arches over by 300 per cent leaving the traders with a dilemma whether to pay on average a £1,000 a week or relocate and start their lifelong-trade form a scratch with a new clientele.

In reality, traders had no practical opportunity to financially afford returning to trade due to the sky-rocketting increase of the rent, leaving them to protest against an ultimate example of gentrification.

The final straw, was in the fact that Network Rail ignored the community’s enquiries about the reason behind the allowance for the continuation of trade for William Hill betting shop and H&T Pawnbrokers whilst other arches had to be emptied to carry out the refurbishment. 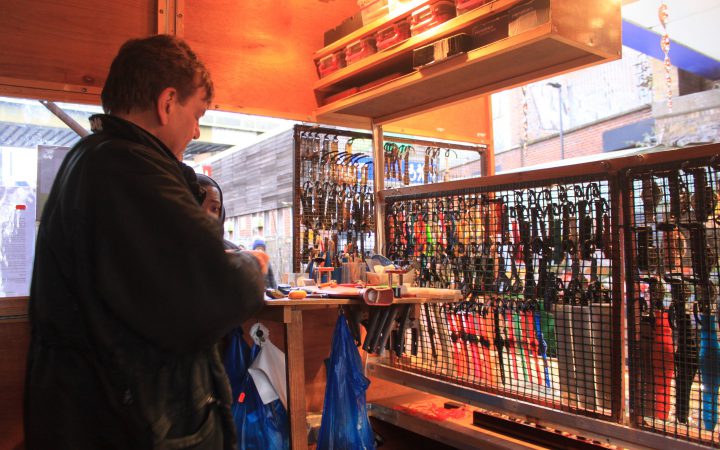 “There’s this utter contempt that the pawn shops have been allowed to continue trading while all of this is going on. They are being untouched by Network Rail,” said Stuart Horwood. “The traders who talk about it. They hate it with passion. I constantly get comments ‘I hate what they doing to the market.’”

“Most of the shops and the cafes were working hand-in-hand with the market, like two brothers that were growing up together and suddenly out of 150 businesses there are only around 30 left,” he said.

“I could remember sitting down at the table at the Future Brixton workshop, trying to imagine what the ‘2020 Brixton’ would look like and if I had realised back then that it wouldn’t look anything like it appear today. My life would have been a lot easier now.”

Some business owners told Artefact that they haven’t even been notified if they’re able to return to their units to continue trading.

Controversially, some believe these spaces are to be sold to multinational big chain companies that are presently settling in such as River Island, Starbucks and Costa.

Nevertheless, locals and campaigners hold a solid stance in their fight against the gentrification.

The failure to support the native community Lambeth Council ought to represent has given a knock-on-effect for unification in a petition Save Brixton Arches which more than 30,000 people have signed in protest at the authority’s intentions.

To date, the campaign hasn’t done much more than delivering a clear message; the battle still continues and from what it seems, there is a feeling that there may be a need to fight fire with fire.

“The real test of the council’s masterplan will be how successful it is in providing replacement business space for those moving from Pop Brixton and some of the railway arches,” in response to Artefact regarding the forthcoming changes, said Alan Piper, Secretary of Brixton Society.

“From past experience, we are sceptical.”