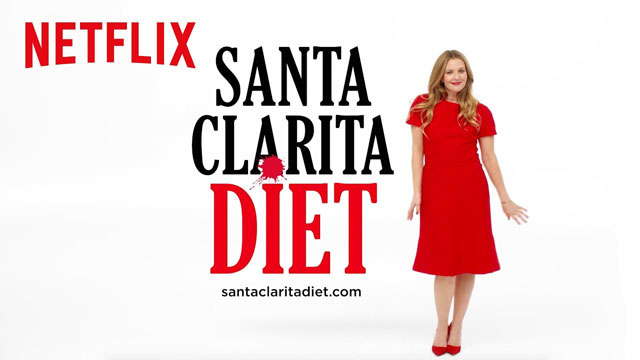 Zombie movies and television shows take us to a world where the undead eat the living and the ones who manage to escape need to run for the rest of their lives.

In its promotional Instagram videos, viewers got a peak at what the ‘diet’ consisted of when Drew Barrymore was seen snacking on human fingers as if they were McDonald’s French Fries.

Barrymore makes her TV debut as Sheila, a typical suburban mother, who tries to balance work and family life.

The story starts when she ‘dies’ and comes back to life as if nothing happened but the only problem is that she now has a deep craving for raw meat.

The show makes the undead seem human, except for the part about killing and eating other human beings

Her husband Joel (Timothy Olyphant), tries everything he can to figure out what is wrong with her while maintaining his sense of humour.

Once Sheila tastes fresh human meat she can’t eat anything else and the couple are faced with the question of whether or not they should kill people in order for her to stay alive.

They also try their best to keep the secret from their 16-year-old, who still manages to find out that her parents have become killers and her mother is a flesh-eating undead person and decides that it’s completely OK that her life is now anything but normal.

Barrymore and Olyphant make a good couple on screen and his cynicism complements her optimism.

The two show that although they have to murder people they can try and make it something good for the rest of the world by targeting criminals.

The show takes a comedic stance on zombies and makes the undead seem human, except for the part about killing and eating other human beings, of course.

The series was created by Victor Fresco who is known for writing My Name Is Earl and who has been nominated for an Emmy for his work on Mad About You.

You can watch the full first season on Netflix.