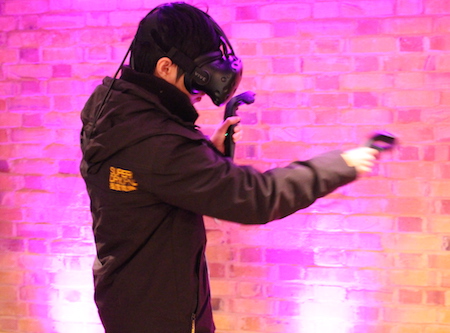 It all started in the 1960s with a headset called the  “Telesphere mask” – 56 years later, images are computer-generated and can be interacted with, wearing modern headsets and hand sensors.  It is also used to view films shot in 360 degrees, allowing people to choose where to look.

“VR technology, [has a] unique ability to simulate complex, real situations and contexts,” according to a report about the emotional and cognitive effect of immersion in film viewing by Frontiers in Psychology in 2015.

VR allows users to feel they are physically present or immersed in the digital space, even with unrealistic graphics. Facebook, Google, The New York Times, The Guardian and many others are investing in virtual reality.

“Investments between 2011 and 2015 have returned 128 per cent of all the money invested already,” according to the last report from Digi-Capital.

Since Facebook bought VR company Oculus in 2014, investments have proliferated – the industry is growing so fast that “in the next three years most homes will have some VR device,” according to VR developer Shaun Allan.

If you want to experience VR, you need a headset. If you choose the cardboard option or Google Daydream, you will also need a smartphone to clip to the front of it, but it will provide a sub-par experience.

High-end headsets like Oculus Rift, which cost £499, are connected to powerful computers that can run VR apps and games. You also need good headphones. If you want to interact you need hand controllers that will translate your gestures into the gestures of an avatar, or into tools in the virtual world.

People tend to be reticent when trying this technology for the first time. When you are immersed in a virtual world you move your arms around, unaware of what is happening around you.

“You tend to see people watching others but they won’t try it because they don’t want to look silly. We need to get past that and get more people on headsets,” Allan added. “It is key to choose a good game or film when trying VR it for the first time.”

In screen games, you know you are a character but you are somehow distanced from it – removing outside distractions can make VR a better playground.

Now you can be in the body of the protagonist. The game Batman: Arkham VR for PlayStation calls for character building and play acting.

The game has a similar length to a film, only that in the game you are the main character interacting with people and places as the story moves forward.

Video games proved to be not only good for battling villains, but also to mediate complex stories and educate. It can make you go to places without traveling.

News outlets like The Guardian and The New York Times are investing in this technology, with the potential to put the audience in dangerous places, in what are called Newsgames.

Latoya Peterson, the deputy editor for digital innovation at ESPN, told the last Global Editors Network (GEN) Summit that because the gaming community understands how to work with storytelling in games, they have been the main force pushing for these kinds of projects. 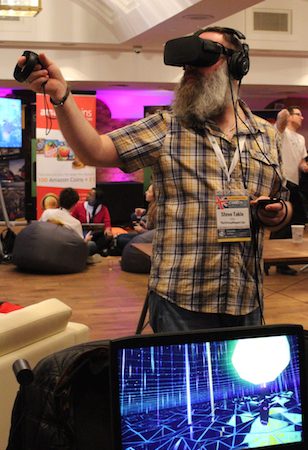 “Newsrooms really need to gain fluency in games and play,” starting by understanding how a game works, she said.

Newsgames can be “the secret sauce to a boring story,” according to Cherisse Datu, a journalist from American University who also led the event. An example of this is the game Fix the Deficit, from The New York Times.

VR films are also used to put the user in the place of a character in the story they would not normally choose to impersonate.

An example of this is UN’s Clouds Over Sidra, where a Syrian refugee girl walks the user around a refugee camp. You are surrounded by child refugees, and you observe their everyday life as if you are one of them.

“There isn’t a sector or an industry that VR and AR won’t touch on over the first few years,” said Allan.

In art, VR experience Dreams Of Dali from the Dali museum, allows the user to experience what it is to get inside of a famous Salvador Dali painting.

As the VR industry is at an experimental stage, there are many challenges to overcome. First of all, VR can make a user feel sick, as if their bodies are in conflict, a “natural response to an unnatural environment,” according to Dr Cyriel Diels, from Loughborough University. Fortunately, there are ways in which the makers of headsets can eliminate this.

Little children can’t go on VR headsets yet, but when it gets to the point where they try them, “they will never look at a screen again. Why would you look at a screen after you have been immersed?” said Allan.

VR manufacturers are setting age limits. This means that the minimum age to play VR Playstations like Sony is 12. Manufacturers are being cautious; the long-term effects are still unknown.

Headsets are not yet designed to be used for long periods of time. Safety guidelines advise users to take breaks every 30 minutes, even if they do not feel tired.

Those users who may feel too immersed are warned about sitting in virtual chairs to avoid falling to the floor, and asked not to have pets in the room, in case they make moves that can harm them when they are not aware of what is happening outside the VR experience.

There is a video on YouTube showing how a man playing a climbing game confuses the virtual reality world with the real one.

When it comes to safety in VR, there are “more questions than answers. […] Regulation is more likely to come from this part of the world than the US,” said David Hoppe, from Gamma Law at VR Connects 2017.

“This is just the start. After games, we’re going to make Oculus a platform for many other experiences. Imagine enjoying a court side seat at a game, studying in a classroom of students and teachers all over the world or consulting with a doctor face to face – just by putting on goggles in your home,” wrote Facebook’s Mark Zuckerberg in 2014.