In your average baby handbook, you might expect to find chapters on choosing a name, how to make the house more baby-friendly and how to deal with the inevitable onslaught of some serious sleep deprivation.

What you probably won’t find are any tips on what to do if your unborn child begins to coax you into becoming a knife-wielding serial killer.

This is the premise of Alice Lowe’s directorial debut Prevenge, a blood-drenched but highly amusing take on the slasher genre.

As well as writing and directing the film, Lowe played the lead role whilst seven months pregnant for anyone left wondering why the baby bump looks so convincing.

We meet her as Ruth – an isolated and lonesome expectant widower. Confused about the mysterious death of her partner, she glumly slinks off for scans and check-ups with a painfully smiley midwife (Jo Hartley) who patronisingly reassures her that everything is going to be ok.

“Baby knows what to do,” she says. “Baby will tell you what to do”.

But Ruth’s baby isn’t idly kicking about in the womb. With a creepy high-pitched voice like one of the twins from Stanley Kubrick’s The Shining, the demonic foetus cajoles her into killing at will.

On her murderous trail, she comes across a lecherous pet-shop owner (Dan Renton Skinner) and a sleazy man-child DJ (Tom Davis). Playing his cheesy tunes to an empty bar, he mistakes Ruth for a “fat bird” and is thrilled to get her back to his place for a one-night stand. After an Inbetweeners-style vomit kiss, he ends up on the receiving end of one of Ruth’s sharpened jabs.

Keeping a note of her latest gruesome outings in a twisted notebook, the distressed mum-to-be encounters a sceptical prospective employer (Katie Dickie) who stares questioningly at her belly before denying her the job.

The scene may descend into predictable violence, complete with a head being smashed into a meeting room glass table, but it raises a recurrent issue about the fears losing worth and identity that can plague women during pregnancy.

It’s an interesting and salient point that no member of the audience expects to be contemplating in a low-budget gore film – and it certainly is gore galore.

Big red puddles of 1980s style horror-movie blood splatters pour out onto an array of surfaces, throughout the film’s 90-minute runtime. 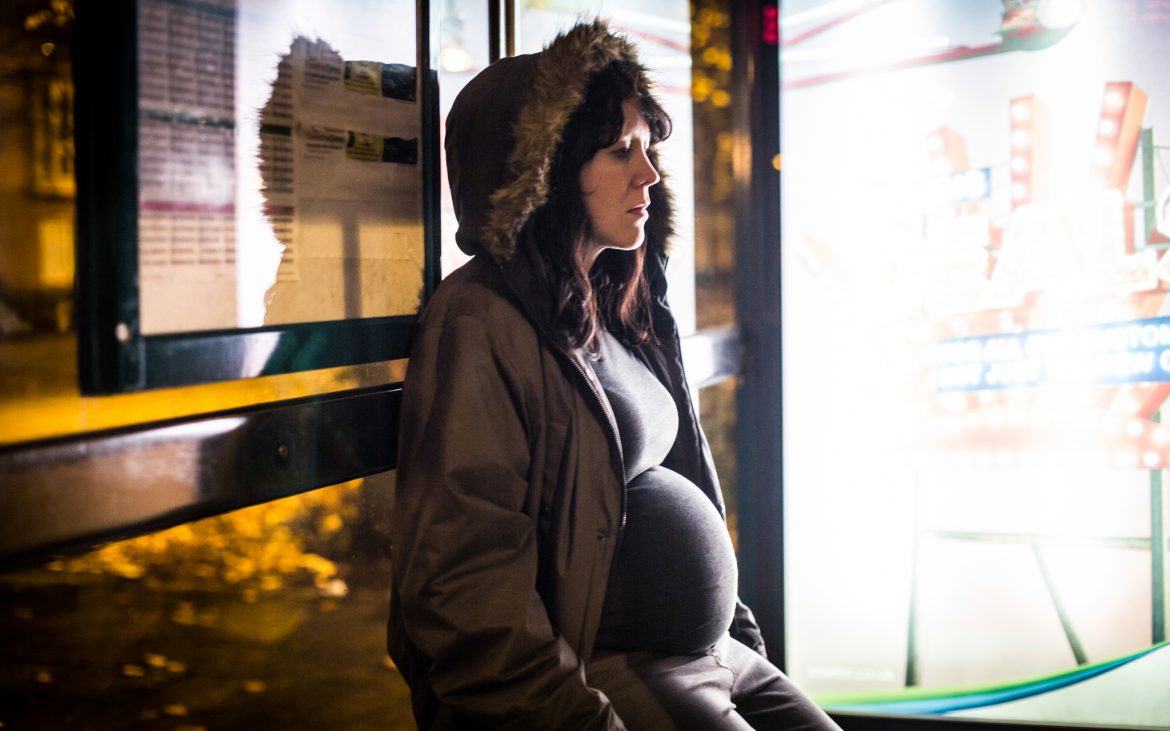 The gags range from the slapstick (Ruth lobbing a shot over her shoulder into the face of another bar dweller) to Ruth complaining about the tiresome internal squealings of her baby’s bloodthirsty impulses – “Mummy I want a PlayStation, Mummy I want you to kill that man.” Kids are so selfish these days.

In a previous interview for the film, Lowe cited Travis Bickle from Martin Scorsese’s Taxi Driver as a source for her character’s sense of vigilantism.

These are effectively captured with multiple shots showing Ruth stalking into the night alone, face emblazoned with Halloween make-up, weapon at her side, the resentment dripping off her in a hazy “me-against-society” style rage.

The actual revenge aspect of the “pregnant revenge” play on the words is unfortunately where the film slightly tails off, and as more about Ruth’s loss is revealed along the way, the killings become a tad formulaic.

It’s a shame that the film develops an ever-so-slightly limping conclusion, but this is easily forgivable and is a thoroughly worthwhile watch for those looking beyond the generic Oscar nominees to get their cinematic kicks.