Exhibition | Robots at the Science Museum

The Science Museum has a new exhibition about the making of more human-like robots – it covers the whole period of robotics from the basic beginnings of automatons to the imaginings of science fiction films, bringing us up to the very present.

I attended the London exhibition to find out what robots can do after a 500-year technological quest to make them interactive.

Robot used in the film Metropolis

The first exhibit that visitors see is a contemporary robot baby attached to a wall spreading his arms. There was also a religious element to a 16th Century automated monk on its left, able to lift an arm and bless.

The exhibition shows the clockwork mechanisms and automatons that were the first robots. There are robots made for famous films, like Metropolis and Terminator, and those from vintage black and white films.

Then there is an assembly area where robots can be seen in pieces and without their coverings. The exhibition leads to some of the most recent robots produced in 2016, like actor RoboThespian, which was made in Britain.

Regardless of the fascination of watching robots made to perform, it seems that in the future we will be surrounded by different kinds of robots, and developers want to make them look more human-like.

A study in 2005, by the Mitsubishi Electric Research Laboratories in the USA, said that people find “interactions more appropriate when engagement gestures are present [in a robot] than when they are not.”

The field is young, with some companies choosing to make a robot look “not too human” to avoid alarming the user. UK company Moley Robotics made a chef robot that imitates the moves of a real chef.

The company told Wired that the robot works as fast as a person not because it can’t work faster, but because it would be scary for people to see a robot chopping in high speed.

In the process of making robots look more human, there is the risk of a grotesque or creepy result, like robot Kaspar’s appearance in the exhibition.

It is the size of a baby with the face of a boy. Its eyes are sunken deep underneath a thick silicone skin. The cuts in the silicon to host its eyes is crudely done in one of the models, which is unsettling. 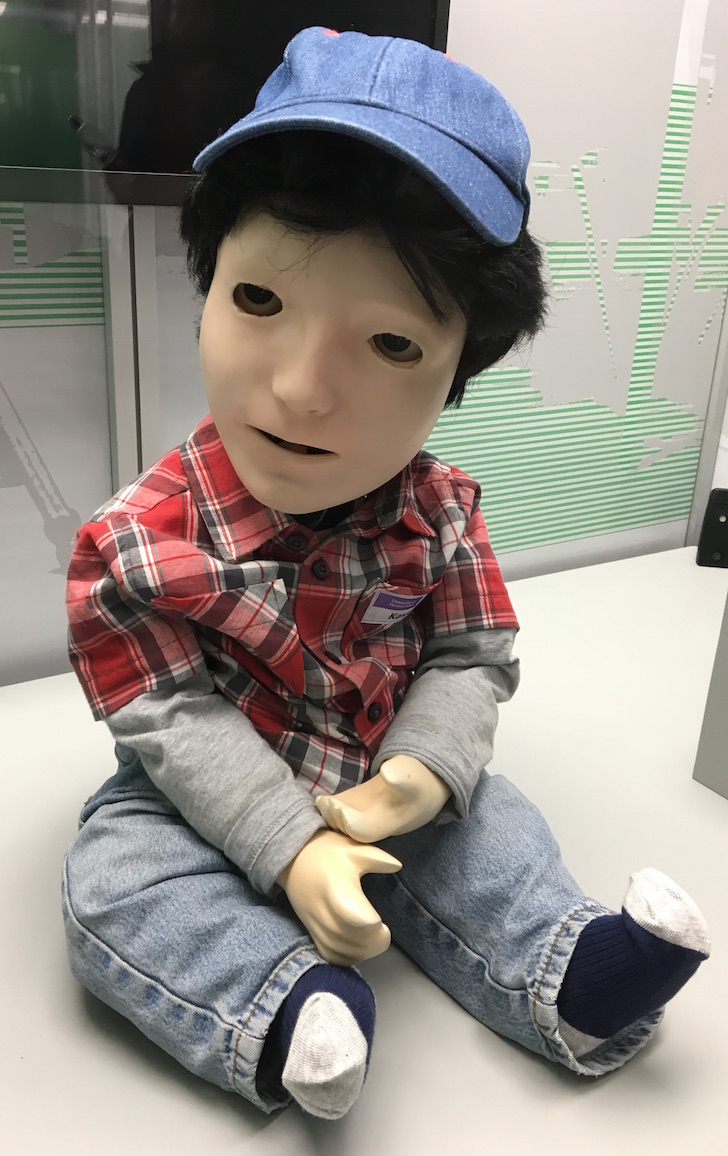 If experiments go well, people can be at ease in the presence of robots. Actroid robots, manufactured by Kokoro, have a sensory system that imitates the movements of the people in front of them.

“It is often said that the more human a robot looks, the more small differences make people feel uneasy. In our research, when we used this robot in the field, we check that it matches its surroundings and doesn’t look out of place,” said Yoshio Masumoto, from the Intelligence Systems Research Institute in Japan.

The closest robot to Actroids in the Science Museum exhibition is Kodomoroid, created in 2014.

This is a robot of an Asian girl with silicone skin, designed to act as a news reader in the Japanese National Museum of Emerging Science and Innovation in Japan.

The idea behind it was to test if automated robots could perform convincingly for a crowd. However, it still seems less than fully human and not entirely convincing.

Humanoid robots or “machine people” are already working in the Chinese catering industry – they are cheap compared to hiring human staff, costing less than £10.000 and they have about ten years of life. Many are automated cylinders or squares that carry drinks and food attached to their ‘arms’.

They have a head with a camera. Some are made to look female and pink, some male and blue. Some are dressed with an apron or a neck scarf. They circulate along magnetic tracks, deliver food and drink, and leave when they are tapped on their head. 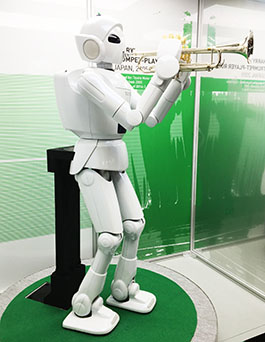 The machines can utter simple phrases or ask people to move out of their way. They add novelty and fun to a restaurant, but they can’t respond to orders or carry heavy dishes yet. There are also robot noodle slicers, that can be hired for about £4,000 a year.

Last year, China overtook Germany in the purchase of industrial robots, according to the International Federation of Robotics based in Germany. They are being used increasingly in China to do jobs that workers are reluctant to perform because they involve working in unpleasant conditions.

In 2014, the president said that China is going through a “robot revolution” that could help them export more manufactured goods, just as England did once during the Industrial Revolution.

The exhibition does not show the most impressive capabilities of some of the modern robots exhibited. Harry, the trumpet player robot by Toyota, did not actually play the trumpet during my visit. 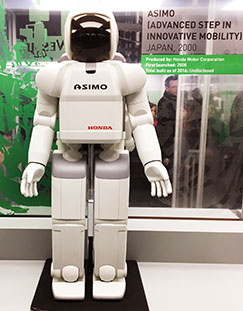 Asimo Robot in the Science Museum

The same was true of Asimo from Honda, a robot with a great agility, said to be the most advanced humanoid robot. In Japanese shows it greets people, it deals with obstacles and serves coffee, but in this exhibition it was in a fenced area that looked too small for it to move.

There was some very brief information about the robots, including a bullet list of what they can do with a debate box, with messages like: “Do robots need a conscience?” But, during my visit at least, the robot did not move at all.

Some robots had videos next to them showing some of their capabilities, but they were also turned off.  This was disappointing, compared with the way that they are displayed in other countries, interacting with the public, what they were designed to do.

For a country like the UK, that created pilotless aircraft Taranis and is aiming to try driverless cars, I would have expected a more interactive exhibition, with people being able to touch robots and interact with them.

This exhibition is, however, good for those who can’t travel to go to see robots in action in places like Tokyo, Osaka, Munich or San Francisco in the US.

The public can see at least their appearance and see them perform some simple tasks in this small exhibition.

British acting robot RoboThespian, that has his own YouTube channel, is designed to perform stand-up comedy.

It can deliver lines in over 40 languages and use facial recognition to guess the age and gender of people and “react” to its audience.

It was originally designed to help with the tedious task of exhibition guides of having to repeat the same speech on each tour. In the Robots exhibition it was repeating some lines and starting again when it finished.

When I sneezed, it made a comment on the cold weather. When I waved my hand, it delivered a greeting line. People talked to it. It was unable to respond, it kept repeating the previous lines. It can deliver a monologue but its capacity for interaction seems limited.

“It is true that humanlike robots fail. They fall, they lose the topic in conversation, misunderstand us, and they disappoint as much as they exhilarate us, but we can’t give up. Let a thousand robot flowers bloom,” wrote robot maker David Hanson in IEEE Spectrum.

The Robots exhibition is at the Science Museum in London until September 3, 2017.