A continuous fight of feminists against the gendered aggression over the past decades has been gaining momentum.

Despite this, many victims of gendered aggression including sexual assault, domestic violence and stalking, hitherto, report that their complaints are not taken seriously.

A central argument of social psychologists is that the media causes some of this normalisation of domestic violence; it desensitises people by portraying domestic violence as “not that bad”, causing people to have a skewed view of the morality of gendered offences.

Moreover, the widespread circulation of these beliefs can cause victims of domestic violence to doubt their own interpretation of their experiences, play down the significance of what has occurred or to behave in ways which make them more vulnerable to gendered aggression.

In Russia, the idiom “if he beats you, it means he loves you” has long been a humorous joke, but also a sign of what future wives should expect, as well as a depressing slogan illustrating what many see as a natural part of domestic life.

The Orthodox Church’s influence on the laws governing domestic morality has been blamed for a number of anti-gay laws in 2014, and the Orthodox Church is presently trying to decriminalise some forms of domestic violence, by giving a religious justification of the new civil legislation which described ‘battery’ as “an essential right given to parents by God.”

“In the traditional Russian family culture, relations between ‘fathers and sons’ are built upon the authority of parents’ power, mutual love and personal indispensability as the basis for children’s upbringing,” said Yelena Mizulina, one of the initiators of the new policy and author of a law that banned “gay propaganda” aimed at minors.

Many though consider this to be a step back into a medieval era and a license for violent behaviour by domestic tyrants, in a country where “40 per cent of grave domestic violence are committed in families”, which indicates that the renewed “conditions made for strong families to emerge” as stated by the State Duma (Russian legislative assembly) speaker Vyacheslav Volodin, will rather be followed by antagonist consequences.

Andrea Mathews, Licensed Professional Counsellor told Artefact that those who have previously adapted their lives to abnormal patterns of behaviour are more likely to sweep abnormality under the carpet in the future.

“The normalisation process does not happen ‘suddenly’ but slowly over time. We just slowly move to a place of nonresistance. That usually happens in an environment in which our resistance to the circumstances is met with such fierce opposition that we become hopeless to do anything about it,” she said.

“Since we cannot deal with the hopelessness, the mind just slowly begins to adjust to what is–even if what is is horribly abusive. This is, in part, how abused persons stay in abusive relationships. Over time and the entrapment of hopelessness the person adjusts to the abuse as if it were the only possible reality.

“Now what is horribly wrong to everyone else, just seems normal to the person enduring it. This is why the American people must keep fighting, resisting the current regime. Because if we don’t we are likely to normalise it.

“People who are more prone to normalisation are those who have previously normalised other abnormal things. Children who grow up in extremely dysfunctional homes have typically normalised the behaviour they see in their homes, and they are likely, thereby, to see other similar behaviour in the outside world as normal,” Matthews said. 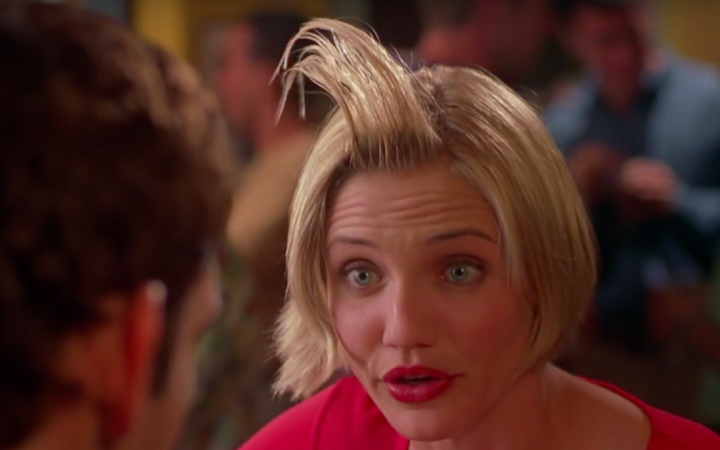 Ted meets Mary for the first time after a decade of being apart.

In the media, when it comes to most movie narratives hiring a personal investigator to track down a prom date from over a decade prior (as in There’s Something About Mary) or flying across the country to declare one’s undying devotion to a woman who has repeatedly made her lack of interest clear (just like in Management). In the real world such actions would be troubling.

“I did it because I never stopped thinking about you. And if I didn’t find you, I knew that my life would never, ever be good again.” In saying this Ted (Ben Stiller) proves his life-long devotion to Mary in There’s Something About Mary

In Hollywood, these grand romantic gestures are often framed as unequivocal signs of true love and that love ‘will conquer all.’

Real life is not fiction.

Research has been carried out into whether media depictions of this romanticised “chasing” behaviour can actually cause people to see stalking as a less serious crime than they otherwise would.

This has been echoed in the research I Did it Because I Never Stopped Loving You by Julia Lippman, Postdoctoral Teaching Fellow at University of Michigan, which examined in experimental conditions the effects of the media’s portrayal of persistent pursuit upon common beliefs about stalking.

She analysed the responses of 426 women to assertive romantic approaches after watching six recent films of no more than an hour-and-a-half, each featuring a plot involving a man chasing a woman.

Her findings showed that one way in which films affect beliefs about gendered aggression is by manipulating the viewer’s perception of the perpetrator. Making the “stalking” character more realistic and having the character travel long distances all were noted as causing viewers to perceive the stalking actions as more acceptable.

When women watched romantic comedies which depicted constant “chasing” such as Management and There’s Something About Mary, where the pursuer had acted more favourably and appropriately, the participants were more likely to normalise and accept “stalking” as just a zealous refusal to give up on love.

The opposite result came from films featuring frightening male aggressive behaviour (psychological thrillers such as Sleeping With the Enemy and Enough) leading to higher negative ratings towards the character who displayed a belligerent persistency towards their love interest. 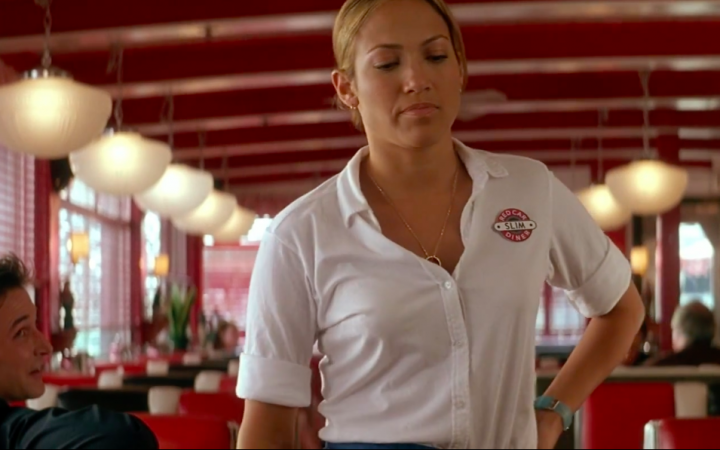 Mitch (left) tells Slim: “I’m a determined man. I was determined to have you, and I did” in Enough

“After watching excerpts from one of these six films, participants completed a series of survey measures, including one that assessed their endorsement of stalking myths,” Lippman said.

“Stalking myths are false or exaggerated beliefs about stalking that minimise its seriousness, which means that someone who more strongly endorses these tends to take stalking less seriously.”

Lippman said exposure to films that depicted persistent pursuit in a negative way made participants less likely to tolerate stalker-like males, while women who watched ‘rom-coms’ (romantic comedies) were more likely to accept such behaviour as normal.

“[Such movies] can encourage women to discount their instincts. This is a problem because research shows that instincts can serve as powerful cues to help keep us safe.”

“At their core, all these films are trading in the ‘love conquers all’ myth,” she added. “Even though, of course, it doesn’t. Love is great, but so is respect for other people.”

The research suggests the truth of Social Cognitive Theory, which promotes learning through observation, and corresponds with the function of film as a medium to indoctrinate to the viewer everything he is shown, directly or indirectly, as a human’s construction of reality is highly dependent on visual examination.
Individuals who are exposed to excessive media influence develop a tendency to adopt or imitate acquired attitudes, emotions, behaviour as well as new styles, modelling these behaviours and attitudes upon what they see in the media.
This also involves learning what not to do, via identification and interpretation. The audience feel like they can relate to a character through what has been acted out, particularly involving emotions such as episodes of stress from suffering, drama or crisis, as if the audience feel and understand them. They then mimic their actions.

Lidia Neykurs, marriage and family therapist at Zaoksky Spiritual University told Artefact that our brain is a like the Internet, as anything ever heard or seen can never be completely thrown out of our brain’s memory files.

“What we see on the TV screen, it’s a fast linear motion occurring at a frequency of 1200 oscillations per minute. The sequence of shots changes so quickly that this information goes out of consciousness,” she said.

“For some time the human brain analyzes the received information, but after a while it responds to it quite inadequately, it seeks to protect. Such change in the visible information exhausts the brain, and it tends to move in the alpha-wave mode, when the brain relaxes and refuses to accept anything critical.”

“This state of rest can be used to reduce our level of sensitivity and rejection of all, it desensitises to perceive abnormal information as normal.”