The faces behind the refugee crisis 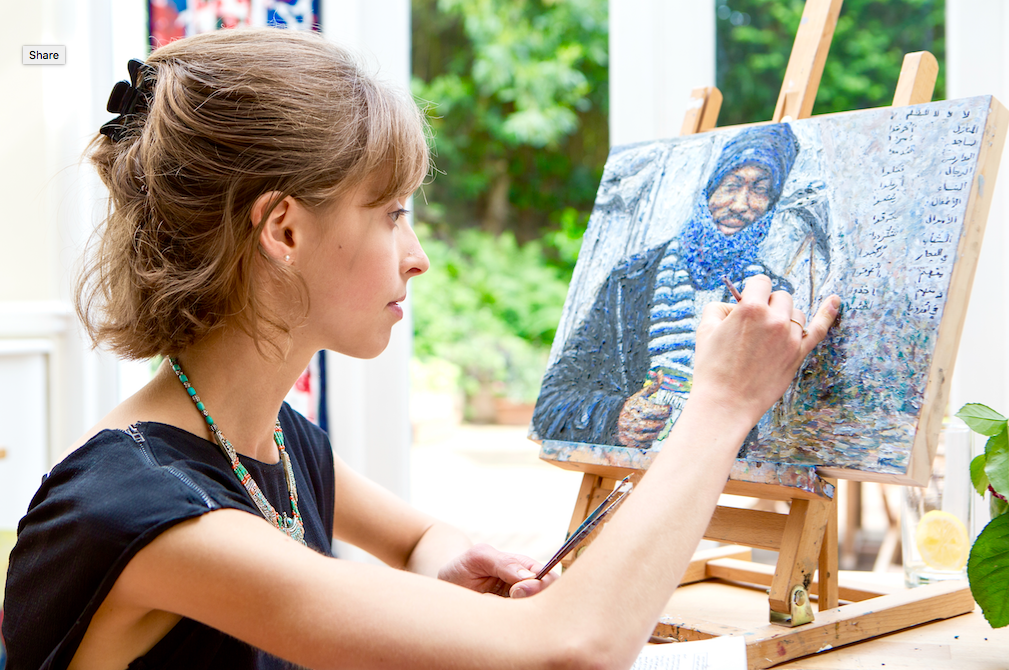 Hannah Rose Thomas is a 24-year-old British artist and recent graduate from Durham University where she studied Arabic and History.

Over the last three years, the artist has volunteered in Calais and refugee camps in Jordan where she organised art projects for refugees, coming face to face with the human reality of the humanitarian crisis.

Hannah has always had a longing to travel to far flung places to seek understanding for those whose lives and cultures are so different from ours in the West.

“Art is the way in which I communicate my experiences and share the stories of people I have met, to celebrate the diverse beauty of humanity” the artist explains.

“Portrait painting is normally for the elite and wealthy,” she says.

However, Hannah uses portrait painting to express her compassion for those in need and those who many would consider among the lowest in society.

Since Hannah left school, she has sold her paintings and received commissions to fund her travels to Africa and the Middle East.

At 18 her interest in the Middle East started when she travelled to Sudan and Iran, whilst she was a university student.

Whilst Hannah was studying, she also had the opportunity to study abroad in Jordan.

She remembers the experience: “I was confronted by the reality of the refugee crisis – there are over one million Syrian refugees in Jordan”.

“I wanted to somehow use my skills to help, so I contacted different charities and NGOs working with refugees and UNCHR (The United Nations High Commissioner for Refugees) they responded and asked me to take responsibility for an art project to be exhibited in Amman (capital city of Jordan) for World Refugee Day in 2014”.

Hannah’s idea was to create a number of tents that would be decorated by refugees in the camps.

The artist’s aim was to raise awareness for the plight of refugees, she explains. 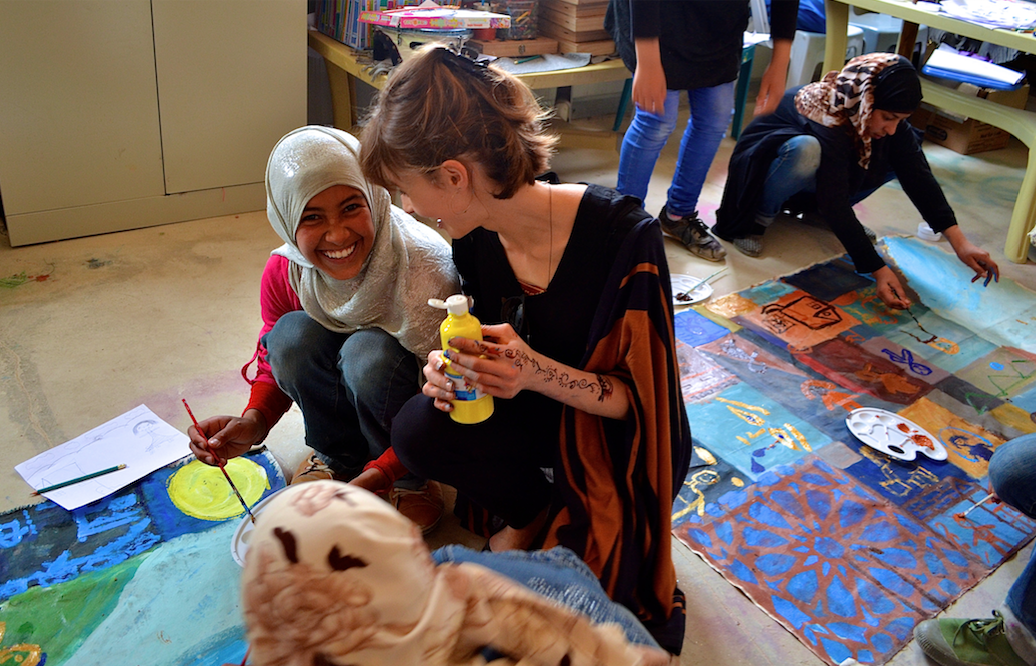 Each tent Hannah and the refugees created follows the themes of; ‘The Impact of War’, ‘Memories’ and ‘Hope’.

“The goal was to turn these symbols of loss and displacement into beautiful pieces of art”.

The three tents were first exhibited in Amman for World Refugee Day.

They have also been exhibited in Belgium, London, Durham, Paris and Geneva.

The artist, fluent in Arabic, uses her knowledge of the language, her passion for art and her compassion for the refugee crisis to reveal the human faces behind the crisis.

She hopes to humanise the individuals forced to flee their homes, whose personal stories are otherwise shrouded by statistics.

“We must remember that these individuals have been compelled to flee conflict; they are not to be dismissed as economic migrants or a terrorist threat”.

In the artist’s essay, The Human Face of The Refugee Crisis she explains that:

“During global challenges of this magnitude, it is easy to lose sight of the lives affected, on an understandable, human level.

“It’s easy to view these people solely as refugees, as men, women and children for whom life has forever been hopeless.

“Yet for all the trauma of their current status, these are lives just like yours and mine, defined by the same human experiences and hopes like parenthood, marriage, a career, and an education.” 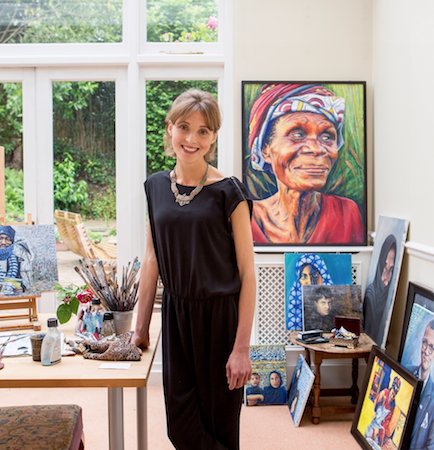 Although Hannah is not trained in art therapy, art projects such as these, have the potential to help refugees with processing and overcoming the traumas they have faced.

The deputy of UNICEF Jordan explains: “With the conflict in Syria now in its sixth year, children have seen and been exposed to horrible atrocities.

“Art is an important form of self-expression and for many children in Za’atari (a refugee camp) it is an outlet to express the horrors they have witnessed.”

Hannah believes “free and safe spaces are important for children who might feel trapped by their trauma”.

In April 2016, Hannah returned to Jordan to organise an art project with Syrian refugees living in Azraq and Za’atari refugee camps.

The Za’atari refugee camp, six miles east of the city of Mafraq in Joran is home to approximately 83,000 refugees.

The camp first opened in 2012 to host Syrians fleeing the Syrian civil war that erupted in 2011.

Whilst Hannah was in Za’atari camp, refugees painted canvases as a way of expressing their experience of war.

Hannah explains that the first canvas “was an abstract chaos of splashes of red paint, dark colours and drawings of tanks, soldiers, dead bodies and destroyed homes”.

This was only a small glimpse of the traumas they have faced.

The second canvas was a “vibrant expression of their memories of Syria, inspired by Islamic geometric and floral designs”, she describes.

The art project then moved on to Azraq refugee camp, close to the Iraqi border where two canvases were painted, reflecting the daily lives of the children in the refugee camp.

“My life has been enriched and deeply touched by the children I have met in the refugee camps and I have loved to see their joy when we have all been covered in paint creating art together”, the artist expresses.

The artist hopes that her art will “express something of the importance of standing in another’s shoes and to seek understand and not to fear those who are different from us.”

“Nothing is more important than empathy for another human being’s suffering. We have to feel compassion for one another if we are going to survive with dignity.”

Hannah is currently doing her MA at the Prince’s School of Traditional Arts in London. She is also raising funds for her next art project in Kurdistan, to assist with the rehabilitation of abducted young women from the Yazidi community.

For more information on Hannah’s projects and her work visit: www.hannahrosethomas.com