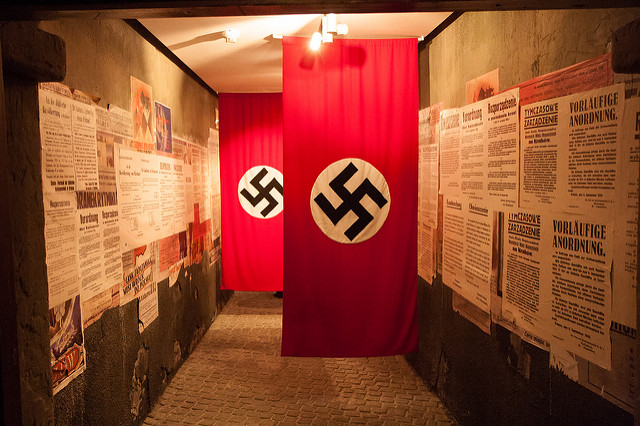 Hitler shot himself in the head with a 7.65mm Walther Police Pistol on the afternoon of 30th April 1945. Although the Nazi regime was dwindling well before his death, it is believed that the suicide marked the official end of the Third Reich.

Many authors, however, have created multiple parallel worlds since WWII that explore the different possible outcomes that could have occurred had the Nazis won the War.

This “dystopian fiction” genre specific to the regime have received large audiences worldwide and the reason why is confusing. It raises the question: Why would anyone like to imagine a world where most people would be oppressed?

Tim Kirk, Professor of European History at Newcastle University explains that it is all linked with our psychology; we build our imaginations from the foundations of what we know and using major events such as the Second World War made stories more intense due to its realistic nature.

“Creating alternative worlds to ours have been present in our literature for centuries,” Kirk told Artefact.

The Man in the High Castle, written by Phillip K. Dick, is one of the most popular pieces of literature in the genre. Amazon even adapted the book into a show which received great reception with Rotten Tomatoes giving it a rating of 95 per cent.

The storyline imagines America in 1962 being divided and run by the Nazis and the Empire of Japan. The country is split between the two fascist states; Japan controlling the Pacific States and the Nazis having authorisation over the eastern coast, separated by a buffer zone to prevent overlap – the Neutral Zone. 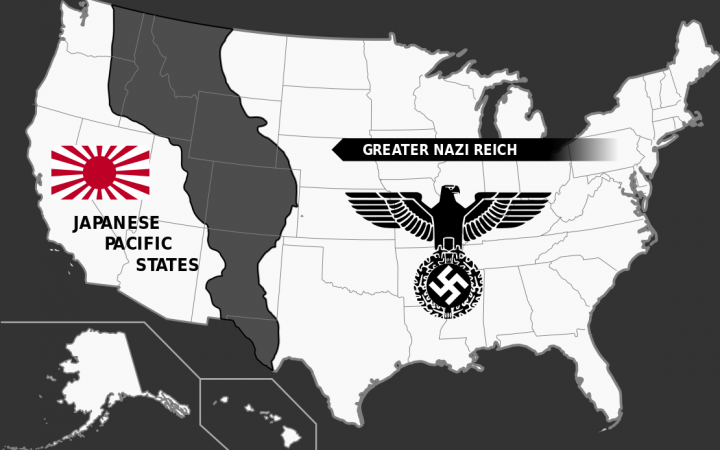 The turning point where reality branches away to this dystopia is in 1933. Instead of Guiseppe Zangara failing in his attempt of assassinating the president of the time, Franklin D. Roosevelt, he succeeds.

This gives the Nazis more time to develop an atomic bomb to destroy Washington DC thus eradicating the entire American government and commencing ground invasions in collaboration with Japan.

Naturally, both states were not satisfied with sharing the country and secretly planned to take over the other. Many Nazi officials decided to create a plan to destroy the Japanese Empire with another, more advanced, atomic bomb.

However, Hitler opposed this idea and demanded his commanders not to attack.

Soon after, the tensions rose to a suffocating level until the Nazis became aware of the atomic weapons the Japanese were now handling. This resulted in the Nazis ceasing their planned attack to prevent the destruction of their own land.

The book is called The Grasshopper Lies Heavy and due to its depiction of what the world would be like if the Nazis had actually lost the war it was consequently banned but incited numerous resistance forces in both the Pacific and Eastern states.

SS-GB, by Len Deighton, is another popular dystopian model, adapted for television by the BBC. In contrast to The Man in the High Castle, SS-GB is set in an occupied Britain in 1941.

The Nazis landed near Ashford, Kent and gradually gained control of surrounding cities. The British army delays further advancements of the Germans until a Royal Navy ship escapes from Harwich, Essex.

The ship contains all of Britain’s valuable material that the country did not want the Nazis to get their hands on. Many believed that Churchill and King George VI were also on board but the book says they were imprisoned by the Germans.

In the course of time, Churchill was tried and executed under the commands of the court of Berlin.

It wasn’t until the Nazis had finally conquered London that the whole country was now under Hitler’s rule.

The book being set nine months after that invasion, and British sentiment towards the Nazis is mixed with many characters expressing an “us vs them” sentiment.

The main character is Superintendent Douglas Archer. He works for Criminal Investigation department of the Metropolitan Police in London.

In the book, he begins a routine investigation into the death of an unidentified man, but becomes involved in a battle between the British resistance, who encourage the unoccupied Americans to help them, and the SS, the Nazi paramilitary organisation.

In an attempt to save Britain, Archer becomes more invested in the cause of the resistance and aids them in helping to smuggle the King to America to act as their figurehead.

While this is all going on the Nazis are hard at work developing an atomic bomb in collaboration with British scientists.

Archer locates the main suspect of his investigation in a prisoner-of-war camp and discovers that the suspect is the brother of the murdered victim and is also a member of the resistance. The brother has been put in the camp for stealing research on the atomic bomb and hiding it from the Nazis.

Archer is not a hero in SS-GB. He has collaborated with the Nazis since the invasion but has also helped the opposing side. This ultimately makes the book more realistic as it is more about doing what you can to ensure you survive in dire circumstances.

One book in the same genre that stands out from the rest is Swastika Night by Katherine Burdekin.

It is one of the few if not the only book that isn’t considered an alternative “history” piece of literature but a futuristic one. This is due to the fact that it was published in 1937 right before the start of the Second World War, making it seem more like an unfulfilled prophecy.

Hitler is a seen as a god who is illustrated as being tall, blonde and blue-eyed

It was also credited as being a revolutionary feminist piece of literature that was ahead of its time for its plot.

The story is based on a British man, Alfred, living in a world ruled by the Japanese and the Nazis. As a follower of the religion, Hitlerism, Alfred embarks on a pilgrimage to Germany.

In the book, Hitler is a seen as a god who is illustrated as being tall, blonde and blue-eyed. Alfred then discovers through secret writings and images that Hitler was, in fact, a short, stodgy brunet.

With this newfound information, he proceeds to attempt to aid the women of Germany who were treated like breeding cattle and returns to Britain to lead an uprising.

Professor Tim Kirk details how Swastika Night was also representative of who Katherine Burdekin was. “She could be described as a radical lesbian feminist and that can be seen in the book where it focuses on the oppression of women and the pederastic nature of the Nazis. There was also no mention of Jews”.

Kirk states that the reason why so many of these alternative history books seem so accurate is because of the authors themselves.

Phillip K. Dick conducted thorough research on the Nazis before he started to create The Man in the High Castle. He noted numerous books as inspirations such as the diaries of Joseph Goebbels, Reich Minister of Propaganda for Nazi Germany.

When speaking of his attempts to create a sequel, Dick detailed that in order to do that he had to once again research about what the Nazis had done and thought it to be “too horrible, too awful” to do it again. He said that if he did consider it he’d need someone who would have the “stomach for it” to endure the details he’d uncovered about the regime.

“Nazi Germany would definitely have not lasted for a thousand years. There were too many different voices clamouring to be heard and Hitler was a paranoid and weak dictator.”

“There were lots of ways to approach this dystopian world but with all the planning that the Nazis did economically and socially, it was a matter of piecing those ideas together to create a timeline that could have happened,” Kirk expands.

When asked about what he thought would have happened had the Nazis won, he said that it was difficult to pinpoint but we can use other empires and European History as templates. He also notes Fatherland, a novel by Robert Harris as most likely to be an accurate portrayal of how Nazi Germany would have functioned.

“There was a point in the war that it seemed as though Britain was inevitably going to lose and it was just a question of when we were going to surrender”. Had Britain surrendered, Kirk believes, that the UK would be on good terms with the Reich and Churchill would have been executed.

“Churchill wasn’t the kind of guys to surrender. However, the Royal family would have definitely escaped as did many Monarchs did over the centuries,” Kirk contends.

Kirk believes that the world would have been more conservative and would take much longer for gender and race equality to reach the level that we’re at now. Nonetheless, the Soviet Union would have been more progressive as they continued to expand their communist beliefs.

“Nazi Germany would definitely have not lasted for a thousand years. There were too many different voices clamouring to be heard and Hitler was a paranoid and weak dictator.”

A model to refer to would be how the Soviet Union collapsed in 1991. Occupying a large area of land under one entity would result in numerous resistance groups undermining the central government that would most likely be headquartered in Berlin.

The sudden surge of Nazi-related shows and films such as SS-GB has been criticised by Stuart Jeffries from The Guardian as Brexit Propaganda, enforcing eurosceptic attitudes. “SS-GB may seem to be counterfactual history but it serves, too, as allegory of the all-too-real German domination Theresa May will trigger Article 50 to escape,” Jeffries writes.

Kirk also speculates that it also has to do with WWII being the last crucial accomplishment of “Britain as an empire” so literatures that imagine Britain in its imperial state, no matter what the circumstances are, encourage a subtle sense of nationalism.

The alternative history of the Nazi regime is nothing more but a fantasy but strikes a nerve with many because of the likelihood these stories could have truly happened compared to other fictional books.

These kinds of literature remind us of the detrimental effects of fascism at a large scale. As Syreeta McFadden states:  They give us narratives of “worst-case scenarios as a warning to change our ways”.