Type “are foxes dangerous” into an internet search engine and the answers you get are likely to include the terms “highly adaptable, timid and generally not aggressive”.

The RSPCA, the BBC and various fox websites all tend to describe foxes as animals that pose no threat to humans.

However, after observing them roaming around Tottenham I can confirm that urban foxes seem to be getting very brave.

I’m not the only one. This is what other residents told me:

“I was walking towards them, I thought they would run off but instead like five of them ran towards me so, I ran back into my car,” Dee-Dee, a gap year student told me.

Another witness was Niyi, a music video and film director who said: “I was trying to get into my car and the fox would not move I had to nudge it with my foot.”

John, a 27-year-old entrepreneur agrees: “This isn’t funny anymore, they see me and start running after me.”

“Listen, I parked up my car and two of them came running over, it’s like they were expecting me to feed them, they’re too comfortable,” said Andrew, a rail engineer from Finsbury Park.

My own investigations have been focused on a particular group of foxes who live around Downhills, an area in Tottenham, North London, and how their characters seem to be changing as they become more and more used to human behaviour.

[pullquote align=”right”]“This isn’t funny anymore, they see me and start running after me.”[/pullquote]Between the social services office on Downhills Way and the cul-de-sac behind it, there is an area of abandoned land that has for years been gated off by a cheap rusted net fence.

With a half knocked-down house, overgrown hedges and random planks of wood, this particular group of foxes were given a free mortgage and have not moved since. I’ve come to know them as the ‘Descendants of Anthony’, after a fox who was named Anthony by a friend of mine after she was surprised at how long he stared at her.

Over the past six years of observing the foxes based in Downhills I never once was scared by them; rather they just annoyed me for making a mess across the area.

The truth is I seemed to scare them, they always ran off whenever I walked towards them and never got too close. But those days have gone, and a new era of fox behaviour has put me on guard.

I noticed changes when I was sure Anthony’s grandchildren knew who I was. Rather than skirt off, they would just stand and stare at me while I spoke on the phone to my mother after a long day at work.

I never cared but I did start questioning how familiar they would become with me and whether or not I liked the idea of them getting too close.

I’d read reports of a fox that bit off a child’s finger in 2013 and the story of the young lady who was jogging to her house when a fox clenched onto her leggings and refused to let go.

But as the months passed and the seasons changed I began to see these cider coloured creatures sitting on top of people’s cars and brushing past my neighbour’s shopping as she struggled to manage the weight of the items she bought.

I even watched the Downhill gang try to rush another neighbour’s cat, and now that poor cat seems to be on guard too. I always am having to watch that cat defend itself from the foxes from my kitchen window. 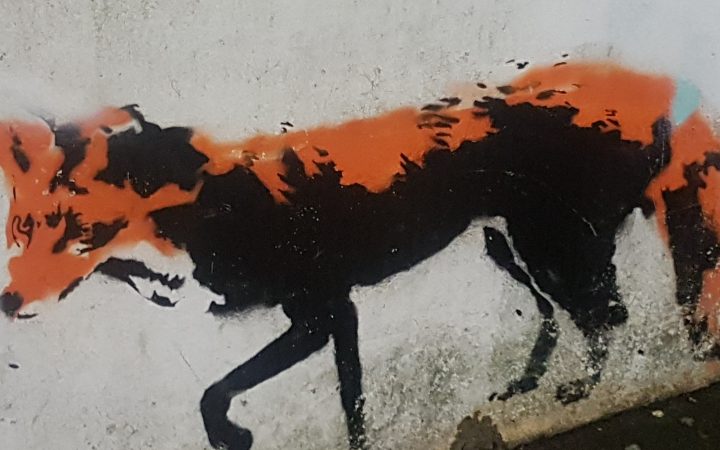 Fox Art Graffiti on Langham Road Near Down Hills way

Dee-Dee, a friend of mine who keeps me company every now and then to catch up with life while sipping on a Tetley brew, visited me about six weeks ago and nearly knocked down my door in the process.

He claimed that as he drove into the cul-de-sac and got out his car, one of Anthony’s offspring approached him from the left, made some sort of noise and in less than a second about five foxes lined up in front of him.

He said he went forward thinking the foxes would move but instead they growled at him which attracted more foxes from under the rusty fence.

In a state of panic, he ran as fast as he could to the right of the foxes and they began to chase him but stopped at the bottom of the stairs that lead to my front door and sat there staring at him.

Another friend John, who’s from Ghana, who came to the UK when he was 11 years old and still sings African primary school songs from time to time, always complains about rodents and creatures. I believe it’s an African thing. In some parts of the mother land dogs are considered a pest: to John, foxes are simply vermin.

Just five days after the Dee-Dee incident John phoned me. He was running down the cul-de-sac screaming “Open the fucking door” because foxes were chasing him down the road. Again, the foxes didn’t chase John up the stairs that lead to my front door, they stopped the chase at the bottom of the stairs.

It is safe to say that after that encounter, for the first time, I was slightly scared but still brave enough to go back out there with John, however I took a pink broom I bought in Poundland three years ago, an empty Nigerian Guinness bottle I had on the side and told John to walk with some Woly shoe spray and a lighter so that if the foxes approached him he could make a big flame and hopefully scare them off.

As we walked along, the first fox appeared and I just chased it like a mad woman and it ran off. But when I left John to come back home, it re-appeared with other foxes. Maybe it’s because they knew me they did not chase me but they did cluster together so I just threw the Guinness bottle at them and they ran under that rusty fence. But this time I was actually shaken.

On another occasion I was stranded outside my house for 45 minutes because a fox was sitting happily outside my door. I was exhausted, it was about 2:00am and all I wanted to do was get home. But as I was a walking up the stairs a fox was looking at me while relaxing on my door mat.

It did not move. I went to the recycling bins and picked up an empty gallon container and threw it at the fox hoping it would run away but it just refused to move.

I phoned the police because I didn’t want to risk getting bitten. The police refused to come but gave me the RSPCA helpline number. They also suggested that the fox may be injured or dying and that’s why it did not move.

After having been on hold to the RSPCA for about six minutes listening to ‘on hold’ music a lady picked up and I explained everything to her. She agreed the fox could be ill or injured and told me that she was going to call a team out to help me.

I was sitting outside on the phone to my cousin, it was raining and it was cold – my neighbour even came out and asked me if I was locked out and I explained the situation. Even she was amazed that the fox would not move when she was poking it with an umbrella. Luckily her brother came to save the day.

He protected himself by wearing several pairs of trousers and coats and forcefully nudged the fox down the stairs.

To our surprise the fox was not injured at all. It did not grunt or fight back. It walked down the stairs very comfortably to meet its friend that was chilling on the grass.

It seems urban foxes are becoming very familiar with humans and in some cases even chasing humans, and this idea that foxes are timid is clearly changing and animal organisations need to look into these new behaviour patterns because, after all foxes are wild animals and this could potentially be dangerous.