In Great Britain and Northern Ireland, we are lucky enough to enjoy the political freedom of living in a democracy, albeit an apparent bi-partisan one.

This means that, although there are other parties, the leader of either the Conservative and Unionist Party or the Labour Party will be asked by Her Majesty to form a government. The parties represent a right or left wing approach and have always appealed to juxtaposing socio-economic groups within our, increasingly divided, country.

The Tories have historically relied on middle and upper-class white voters. While Labour’s grass root support comes from the working class, young people and students. Both parties have enjoyed lengthy stays in power since 1979, when Margaret Thatcher won the election to usher in 18 years of Tory rule, only to be followed by 13 years of Labour.

One thing that has remained constant during this time is the support for Labour from full-time students. No more so than in the most recent snap general election called by Theresa May.

Labour’s Jeremy Corbyn, with the promise of abolishing tuition fees and creating a socialist paradise, became adorned with respect from students. His rallies were often drowned out by a cacophony of noise from his supporters all chanting one mantra: “Oh, Jer-e-my Cor-byn”.

A poll carried out by YouGov after the election revealed 64 per cent of students supported the major left-wing party. But what about the rest? Perhaps shocking to some, this was broken down into 19 per cent for the Tories; almost 1 in 5. So where are the student Tories? Why wasn’t a manifesto designed to appeal to the under-represented, good enough for them? And why isn’t this number higher?

[pullquote align=”right”]“People who admit they voted Tory, it’s almost social suicide.”[/pullquote]So why is it Labour has such an affiliation with students? After all, it was a Labour government that introduced tuition fees by passing the Teaching and Higher Education Act of 1998.

Artefact spoke to one Tory voter about this symbiotic political association. Maxim Cook is a 19-year-old student at Chelsea College of Arts. He lives in a modestly-sized three bedroom flat with a garden in Clapham, an affluent part of south-west London, that he shares with two peers from his course.

He continues to reference Labour, whose leader is 68, and would be over the age of receiving his state pension. “Labour doesn’t necessarily have young people, and Corbyn isn’t getting any younger. But, some of the MPs are young, and I think it’s the whole thing about looking towards the future. Some of their policies that I don’t agree with are very anti-young people; I think they forget there is a younger generation.”

Sam Ancliff is the campaigns director at the independent centre-right youth organisation ‘Activate’, but he is not your stereotypical Tory. He was raised in council housing and currently resides in Nottinghamshire, has lived through a brief spell of homelessness and currently claims job seekers allowance.

When asked about Labour’s association with students, Ancliff told us: “Two factors to it really. The main one is communication, we have done a lot of good things for young people, but we never talk to anyone about it. As a party, there hasn’t been any real effort to change our communication methods.

“We put a ridiculous amount of money into leaflets and newspaper adverts in The Sun, but those aren’t going to reach younger people. Until recently, there hasn’t been any effort by the party to use social media or to try and make presentations or speeches at universities or colleges. There’s been no effort to try and cultivate that and to educate them about conservatism, which has given Labour free reign.” 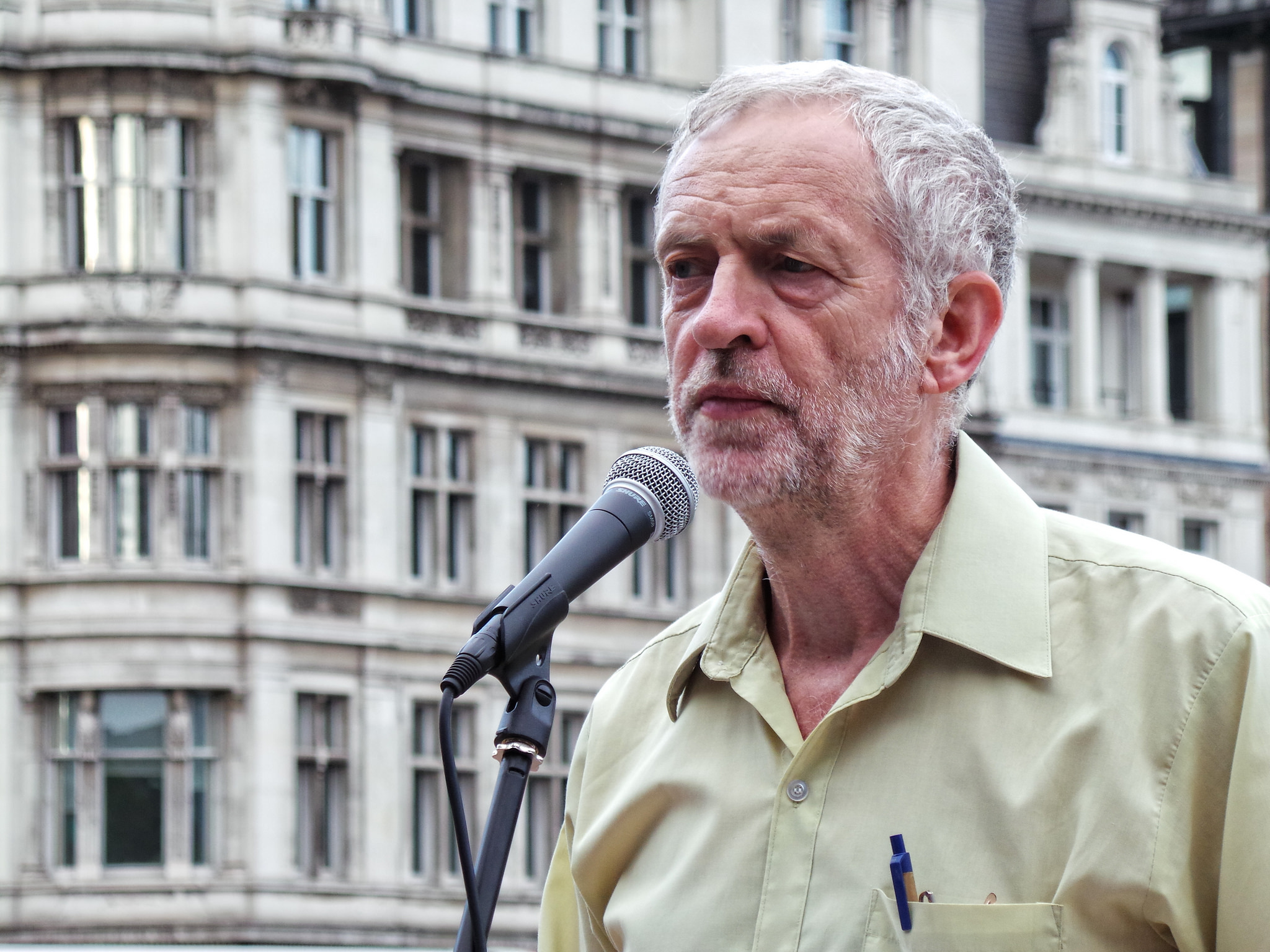 Corbyn is popular among young voters, despite his age [Flickr:Garry Knight]

The subject of tuition fees was at the forefront of this election; the Tories planned to further increase tuition by £250, bringing the total to £9,250, while Corbyn promised to abolish the whole scheme altogether.

One would be forgiven if they were to draw similarities between this abolition, and the failed proposal by the Liberal Democrats to prevent any increase, during the coalition with David Cameron of 2010.

We asked Cook about why this part of the manifesto didn’t interest him and why he wasn’t perturbed about the increase. “That won’t affect me, that £250, so I’m not really bothered about that. Everyone else who is younger can worry about that. I don’t think he would’ve gone through with it; I think its all these false promises. He can’t learn to lead his own party. I don’t see why it was such a main point of his campaign.”

On this point, Ancliff disagrees, believing the policy would’ve been passed. However, he added: “I don’t think it would’ve been as seamless as they hoped. The estimated costs of doing it were £42 billion yet when I went through the Labour manifesto they only allocated about £8 billion.

“That money was going to have to come from somewhere; it’s come out recently Labour was looking at cutting the income tax free threshold down to £6,000 again. That would cost everyday people £1,200 more a year. I think they would’ve done it; I don’t think people would’ve been happy with how they did it.”

Cook was born and raised in the Somerset constituency of Wells, a seat that has been Tory all but three times since 1885. We asked about whether one’s environment as a child plays a role in their political ideologies in adulthood: “I think it’s tradition, my family does, it’s what I was brought up on. But I also think there is something about personal image. If you say you voted Tory, it gives you some sort of power over people, but only in your mind and not theirs.”

We raised this sense of secretive grandeur with Ancliff, who believes this isn’t just an individual principle, but a party-wide one, however fruitless it may be: “Each side always feels superior to the other, and it’s not the case, we are all the bloody same. There’s no need for people to feel superior to each other because we all want the same thing, we just want a different way of getting it.”

However, Tory pride was a topic frequently brought up by Ancliff who sees it as one way they will gain more votes from young people. “One of the things I’ve been doing is contacting universities and colleges, to get me in to speak to the politics class. So we can actually have people standing up and saying, ‘I’m a Conservative, and I’m proud of it’, the more people do that, the less that stigma will apply.

“There are a lot of young conservatives out there, but they are hiding right now. It’s not a case of breaking the stigma, we just need to encourage people to be proud about being a Conservative. To make it something cool again.”

[pullquote align=”right”]“I think if they had more young people in the party, then it could help.”[/pullquote]This attempt might be met with resistance however as, from his studies at UAL, Cook’s own experiences have reiterated the statistic that a majority of students swing to the left. “At Chelsea, besides one, they all voted Labour. I got really belittled by it. They were quite horrible; always asking ‘why, why, why?’ I don’t have to justify myself to anyone. I’ll obviously stand up for why and say what stuff I agreed with them on. People who admit they voted Tory, it’s almost social suicide.”

A rather macabre hyperbole, but one we tried to follow up all the same, even more given that this negative image within the education system is one of Activate’s objectives. “The message isn’t going to be ‘vote Conservative because I’m telling you to’. It’s going to be a this is why it’s important to go out and vote, and you never know it might backfire completely. I think the important message is why your right to vote is so important and why you need to make an educated vote.”

In April of this year, Theresa May defied her own words and called a snap general election. At this point, some pollsters had the Tories at a 20 point lead over Labour. A party that was trying to recover from a fresh leadership contest after post-Brexit infighting caused a vote of no confidence against Corbyn. Whats more, the party was rife with claims of deep rooted antisemitism. It was predicted to be the biggest Tory majority since the Thatcher landslide of 1983.

In the six weeks that followed, May’s lead in the polls diminished. Failures to appear at televised debates, awkward interviews and a manifesto that included the so-called ‘dementia tax’, an apparent blow to the mature Tory supporter, meant for an erratic campaign. What was supposed to be strong and stable was replaced by weak and wobbly.

On the left, however, Labour leader Jeremy Corbyn was running an exemplary socialist campaign, one that appealed to the exact minorities and demographics the Tories had neglected over the decades – students, renters and the worker’s unions. Ancliff attributes the failings of the Tories among students simply down to, “we had nothing to offer them, it was Labour’s monopoly.”

The Conservative Party Press Office was contacted with an inquiry into party membership among young people; so far they have not responded to the request.