Is there a gun culture in the UK?

Gun crime impacts people all over the world. So, what happens when you have the toughest gun control laws, but gun crime is still an issue?

It is an incredibly rational and natural feeling – the desire to protect.

The United States is known for having one of the deadliest gun crime rates in the world and with mass shootings occurring on such a frequent level, continuous media coverage would be almost entirely impossible.

Often, we use America as a ‘worst case scenario’ and an ‘avoid at all costs’ when discussing gun crime. However, looking at gun crime on a ‘smaller scale’, in the UK for example, allows us to make note of the similarities and differences between the two cultures.

‘The right to bear arms’ is one of the fundamental purposes for allowing the distribution of guns and active gun ownership in the United States. The right to be able to defend yourself, your family, your home, your possessions and everybody you love.

Licensed guns are legal after all; you have gone through all the correct security procedural routes in order to safely and rightfully own a gun. When purchasing a gun in stores, all you need is your name, your age, your date of birth, your social security number (optional), citizenship and race. 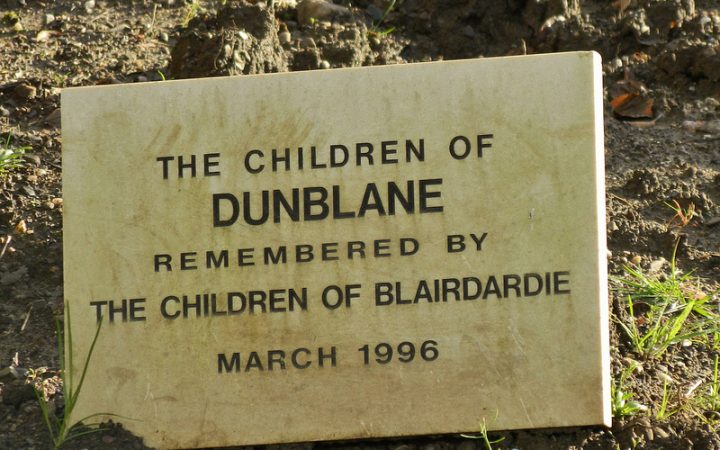 The massacre at Dunblane proved a turning point in the UK [Flickr:Michelle O’Connell]

The form will also ask you questions relating to your past; are you a criminal? Have you been admitted to a mental institute? Are you a previous drug abuser? And finally, the store runs an FBI  background check, (only takes a few minutes) and the process is complete – you can make your way home, gun in hand.

Guns can also be purchased at gun shows which take place almost every weekend in the US. Although at gun shows, you do not need to undergo a background check in order to buy a gun. Anybody can purchase a gun and be on their way.

Time and time again studies have shown that even legal guns can end up in ‘the wrong hands’ – therefore it would be exceptionally naïve to ignore the harsh realities that are a product of a complex and diverse gun culture.

The heated gun debate in America is never-ending, and the laws remain the same despite the constant string of horrific events which are a result of gun violence.

America is known for having a bloody history surrounding gun violence, with catastrophic events such as the shootings in Columbine, Colorado, Orlando, and more recently Las Vegas. These are moments that always cause an emotional response around the world.

Gun crime in the US has become disturbingly frequent, and guns have become the third leading cause of death for children in the US; a chilling statistic.

Gun laws in the UK are entirely different: The Firearms Amendment (No.2) Act 1997 is the second act which restricted and prohibited the legal possession of guns in the UK.

It is illegal to have possession of hand guns, semi-automatics, pump-action and non-rim-fire rifle guns. A law which was set in place after horrific massacres took place in the UK.

Although the laws against guns in the UK have had an arguably positive long-term impact, gun crime is unfortunately still prominent within the UK.

So what can be considered the next logical step? The psychology behind guns, the motivation, influence and drive that forces individuals to possess guns, and eventually pull the trigger?

Gun crime in the UK has been evident for many years despite the tough laws set in place to prevent this. Fire arms are creeping their way onto our streets and there are a number of different reasons that these guns are being distributed illegally, and legally.

Although the extent of American gun culture is on an entirely different calibre compared to the gun culture within the UK, we cannot deny its existence. 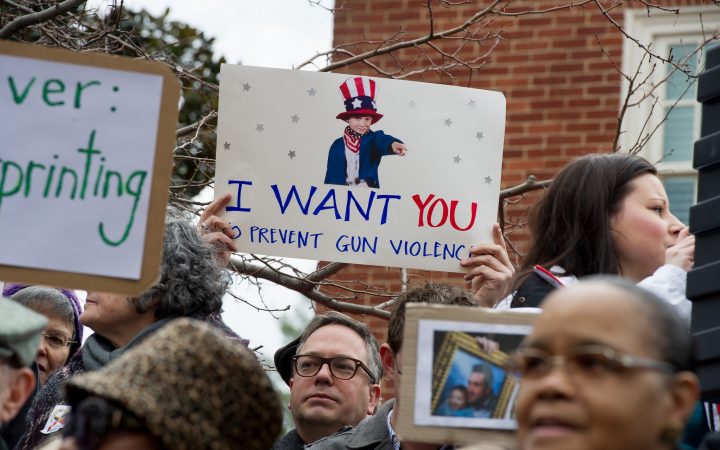 Rally against gun violence in the U.S. [Flickr: MarylandGovPics]

The gun laws in the UK do not stop gun culture from polluting our society. It is an incredibly complicated topic, from competitive gun sports, to the gun crime that is a consequence of gang culture. The intricacies are endless.

The fact that the laws are tighter in the UK certainly maintains a certain degree of control, however as reports have shown this can only be exercised to a certain extent.

The majority of these disastrous and horrific crimes continue to take place, which is proof that gun crime is also very prominent in the UK, despite the effort to adjust the laws.

Our stringent laws have proved to reduce the crime rates overtime, but is just simply isn’t enough.

Crimes involving firearms are continuously being reported, despite the notion that tight laws are keeping this prominent gun issue under control.

After the Dunblane massacre in 1996 which took place in the UK, one of the deadliest and most tragic mass shootings to date, gun control debates were overwhelming; which lead to two new laws being passed in order to ban the right of gun ownership.

After firing 105 shots, he killed 16 school children, including their teacher, wounded 15 children and eventually shot and killed himself. The emotional impact of the shooting was overwhelming; the innocence and vulnerability of the victims too much to comprehend.

There was overpowering debate and the impact it had on Great Britain as a society could not be ignored. Change was demanded, fast. The direct link between violence and gun control was identified, and the laws needed to be changed.

Unfortunately, the ban on gun ownership in the UK did not have an initial widespread impact, the positive effect of the laws were only identified on a long-term basis.

According to the UK Firearm Crime Statistics, Gun crime in the UK rose at a tremendous rate in the late 1990s and was at it’s peak in 2003/04 with 24,094 offences recorded.

Since then, the figures have dropped tremendously, although there is still a significant number of crimes reported involving firearms each year. 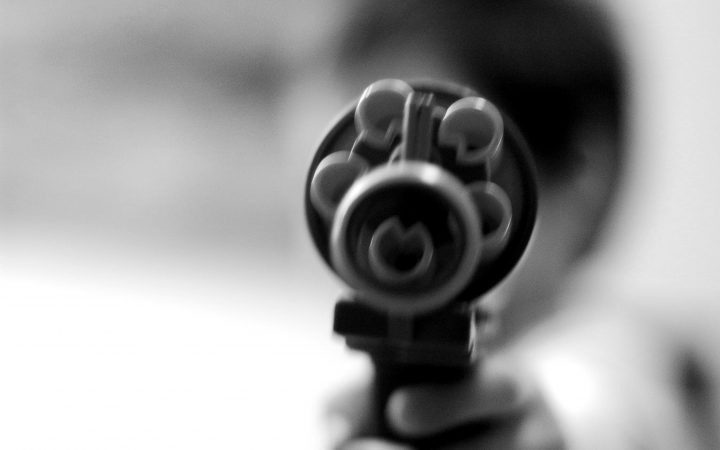 Gun crime in the UK rose in the late 1990s [Flickr: Gideon Tsang]

Crimes like this, which occur despite our rigorous laws, are still happening on a much too frequent level.

Twelve people were confirmed dead, and others were seriously injured, left fighting for their lives. Cumbria was on an official lockdown as police forces aimed to track down the killer. It was a vicious attack that shocked the entire nation. It left us questioning – how these things could still be happening?

Prime Minister at the time, David Cameron, promised to care for and assist those involved in the attack. “The government will do everything it possibly can to help the local community and those affected,” he said.

Cameron also pointed out that the laws in the UK were already some of the toughest in the world, and that “we shouldn’t make any knee-jerk reaction to think that there is some instant legislative or regulatory answer.” The laws set in place were considered fair and reasonable, and over time had reduced the amount of crime related to firearms, although these figures continue to change.

Cameron pointed out that the psychology behind guns is what desperately needed to be considered, as the laws are in place, the only rational solution is to look at why people are still producing their own guns, and obtaining guns illegally.

So, why are they needed? Cameron, referring to the motives behind a killer, then added, “You can’t legislate to stop a switch flicking in someone’s head and for this dreadful sort of action to take place.”

Legislation can only do so much to prevent crime: our efforts need to desperately shift in order to understand why these crimes are still taking place.

Unfortunately, the reality is that illegal and legal guns remain in circulation, whilst some of these guns are used ‘appropriately’ and abide by the strict laws, others are obtained illegally and are a direct threat to our society.

Heart-breaking attacks are still a worrying and dangerous problem for our communities. It was recently reported that a middle-aged man was shot and killed in Enfield on August 23, 2017. Less than a month later it was reported that two boys were shot in broad daylight in East London; both were left with life-changing and possibly life-threatening injuries.

The strict laws that are in place inevitably makes it harder, but clearly not impossible, for an untrustworthy individual to get their hands on these deadly weapons. These gun related crimes that occur on this particular level are commonly associated with gang culture, an unfortunate product of growing up around violence. 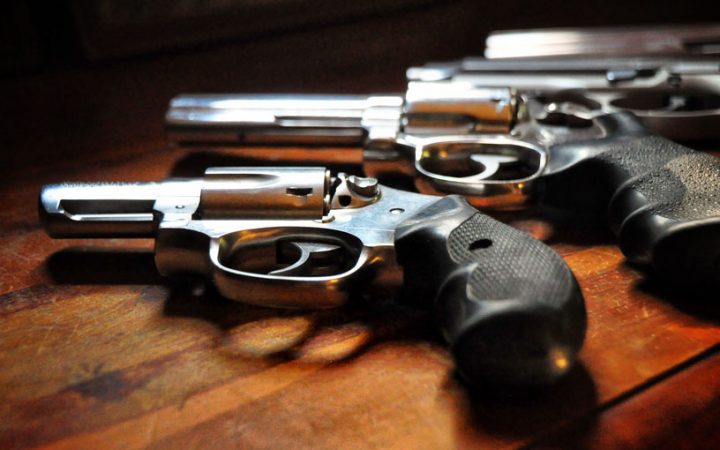 Strict laws make it harder, but not impossible, to get hold of guns [Flickr: Rod Waddington]

Licensed guns in the UK still trickle their way through the grapevine, ending up in the hands of a potentially violent individual.

Peter Squires, Professor of Criminology and Public Policy at the University of Brighton comments on the harsh realities of gun distribution in the UK: “The vast majority of guns start out legally produced, the trick is working out when, why and how they slip into illegality. If there were no legal guns, a source of criminal supply would be stocked up, but ingenious criminals find a way,” he told us.

“A few years back, it looked like thefts of guns, from their legal owners, were running at around 800 a year in the UK,” he added.

There is an overwhelming amount of evidence to suggest that there is still a gun problem prominent and alive in the UK, and despite the progress that we have made over the years, a significant amount of crime involving firearms is still being reported.

Laws within the UK have had a positive impact in minimizing gun culture and gun crime by preventing it from spiraling out of control, but the problems rest with the motives behind gun crime and the way in which our culture desensitizes this enormous issue.

Peter Squires also comments on the fact that the most common reason for owning a gun is protection: “Young people are constantly presented with a view of how dangerous life in the city is. Survey after survey has found young people to explain their weapon carriage in terms of ‘protection’ – but it is also likely to get them arrested/convicted. The phrase ‘better to be judged by 12 than carried by six’ – makes the point.”

Individuals who carry guns illegally and for ‘protection’ are very much aware of the consequences they may face, however for many it is a life or death situation.

Violent upbringings and the desensitising of violence in our daily consumption is an incredibly common factor which leads individuals to think violently and act in violent ways.

The issue is preventing this, and aiding those who feel threatened and are essentially at risk of being exposed to violence. The unfortunate reality is that laws do not stop bad things from happening, they can only minimise their frequency.

Criminals may always find a way to obtain these deadly weapons; and efforts need to focus on the psychology behind guns, the purposes, motives and influences that lead an individual down a dark road and forcing our society into a never ending cycle of violence.

It is evident that the UK have a certain level of sensible control over guns, but how can we begin to understand what goes on in the mind of a killer?