Hundreds of people head there and join a queue, patiently waiting to be given a number. Finally, Thursday comes around, and after days of anticipation you can finally walk into a shop!

All of that just to get hold of an item of clothing?

How shopping has changed. If it’s big streetwear brands you desire, this is what you now need to be prepared to go through as a consumer.

‘Copping’, otherwise known as purchasing a highly desired item is an art and requires a lot of time and patience.

Supreme is arguably one of the biggest streetwear brands in the world right now and requires customers to go through this lengthy process to get hold of their items. 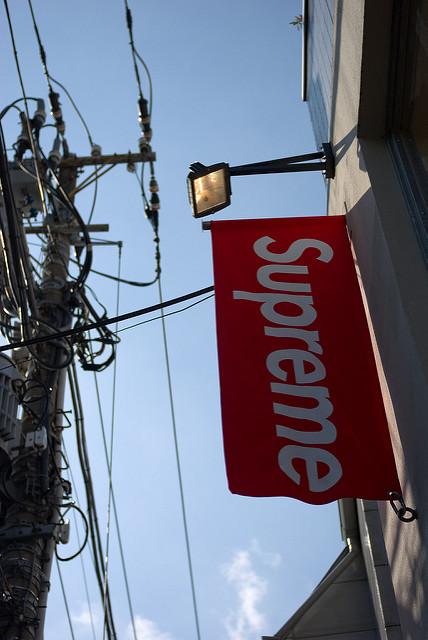 The brand, which was founded in 1994, only has 11 stores worldwide, and only one of those is in the UK, in London. Other Supreme stores are based in Paris, Japan, where there are six, and the US, which has three.

Every store goes through the same level of craziness every time the company brings out new stock. “Drop day” is always on a Thursday. This means new stock will always be for sale on a Thursday whether it is just solely a Supreme drop or a collaboration with another brand.

In some cases, the streets have been filled the night before with streetwear lovers queuing up ready for the next morning so they could get the clothes they desired. However, this is now being stopped and there is a much more complex method to get into the store for that Thursday morning drop.

Frequent streetwear buyer, Connor Hill, has given Artefact a detailed insight into the requirements needed to buy an item at the Supreme store on those crazy Thursday mornings. Apparently it’s not as simple as walking in the shop, picking up your desired item, paying and leaving.

“If you want to go into the store on a Thursday (drop day) you have to sign up to a mailing list, then on Monday at 10am a location is sent out telling you where the sign up is being held,” he said.

The 22-year-old has been buying from streetwear brands for a while now and has seen the growth in demand as brands such as Supreme and Palace have exploded in popularity in the last two years or so.

“You go to the sign up and then wait in a queue till you get to the the guy doing the sign up. You have to give him your ID and he will take your name down, then a random generator gives you a place in the queue for the drop day – the place in the queue will be between one and 400,” Hill explains.

The sign ups in London this season have been held at Bay 66 skate park or the Oval Space.

“You then get told to go to the Supreme shop on Thursday at an allocated time slot and you join the queue in the position the generator gave you,” Hill says.

If you do head to the Supreme store first thing on a Thursday morning, the street will more than likely been flooded by a large amount of ‘hypebeasts’ – whether you’re in the US, Japan or London, these streetwear enthusiasts can range from about 11 years-old upwards and all will be desperate to get their items. 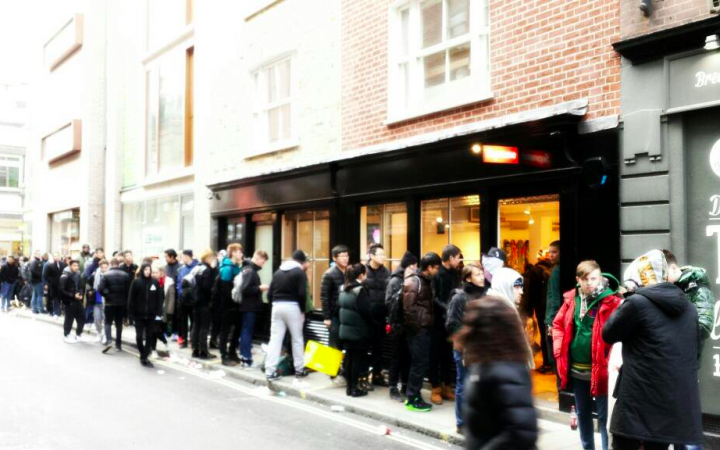 If you don’t fancy the mailing list to queueing business, you can always buy your Supreme items online but it is still “manic”, says Hill. “Stuff online still sells out in seconds so it is in no way the easier method. A good example is the Stone Island Supreme drop from a few weeks ago.”

Looking at the statistics from this particular drop, items such as the Lamy Cover Stampato Puffy Jacket and the S/S Top were selling out in as little as eight seconds. With stock running out that quickly, buyers definitely need to know what they are doing in order to get what they want.

“To cop online you either have to be really lucky or you have to have a bot that will check out for you in seconds. Most of the time online you’ll be lucky enough to get one item only let alone any more,” Hill tells us.

There is obviously a reason as to why shopping for the major streetwear brand is such a hassle. Since being established in New York in 1994, Supreme has been part of some famous collaborations, including work with The North Face, Louis Vuitton, Nike and Comme Des Garçons amongst others.

These collaborations have such an intense build up with frequent leaks before drop days to allow consumers to get a sneak peek at what’s to come. Supreme alone is an expensive brand but when a big collaboration comes around, people will pay a lot of money for an item of clothing or a pair of shoes.

However, Supreme is no longer about copping an item just for your own personal use. Many consumers of the brand now buy the items just to sell them on secondary markets to make a profit (and a big one at that).

“You’ve got your basic resell places such as eBay and Depop. You’ve also got Facebook communities and groups such as The Basement and Supreme Talk UK/EU which tend to be a lot friendlier and prices tend to be a lot fairer – although buying a t shirt that retailed at $34 but now resells for $1200 isn’t exactly fair”. Hill also has experience in buying stock being resold.

Even if you decide to buy from someone who is reselling items there is a chance of getting scammed, which is a common occurrence. People selling items and not posting them to the buyer, or people selling fake items for the price of the real item are examples of such scams.

However, there are ways to make sure you are safe before spending hundreds of pounds – such as buying through trusted sellers or through someone you have direct contact with.

It is fair to say that copping items for worldwide streetwear brands is pretty much down to luck or being super quick to sign up/press the checkout button. To anyone not used to the ‘hypebeast world’ it seems like a crazy concept, but it is becoming so popular it will undoubtedly become even harder to get hold of Supreme stock and other big names in the future.