A life in the day: Aryana Sayeed 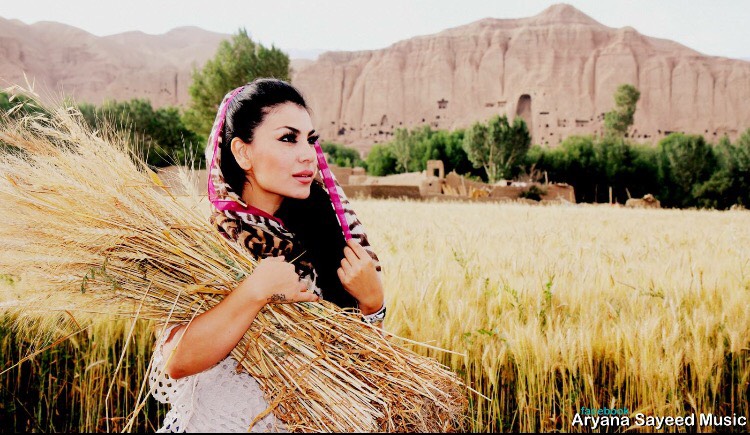 Born in Kabul, Afghanistan, Aryana Sayeed, 32, grew up travelling in many different countries and now lives in London, UK. She attended East Berkshire College where she was a student of Business Studies and shortly after decided to pursue a career in music.

In 2008, she rose to fame with her single Masha’Allah’, which made her the first Afghan artist to have their song played on international TV. Over the years, she has spent much of her time in Afghanistan trying to bring hope to the lives of the people there, especially women.

She gave Artefact a snapshot of her days in Afghanistan and in London, and how life for women differs in the two countries:

“In Afghanistan, I’m usually up early as I normally have a lot of commitments that need to be done. I have a cup of coffee every morning before I start my day. It makes me feel more alert and attentive. It gets me through the day. Without having it, I would feel like I have lost something.

I will begin the day with my music commitments. I will be busy filming for certain TV shows like Afghan Star, as one of the judges of the show, or making a special guest appearance on some special TV programme as well as performing concerts and attending events.

When I am not busy with my music-related things, I am very much involved in my humanitarian work and will often be visiting orphans and children. As a Women’s Rights Activist, I visit Afghan women, try to hear out their problems and provide them guidance if possible. Life for women here is very difficult, they do not really have a voice of their own.

I spend as much time as possible with some of these children, orphans and women to whose life I can bring a moment of joy. I absolutely adore children. Most importantly, I believe it is our duty to help each other, especially those who are influential and has the ability to make a difference. From time to time, I am privileged to assist some misfortunate families in need. It is really fulfilling.

For lunch or dinner, I enjoy eating almost anything as we have the most delicious food here in Afghanistan. My favourite to eat within Afghan food is ‘Shola’ then ‘Borani Bademjan’, known as Afghan Sticky Rice and Afghan Egg Plant dish. I absolutely love ‘Shola’ and would never get tired of eating it. In fruit, I enjoy having a mango. It is one of my favourites.  Our fruits are extremely delicious – they are natural and organic.

What with being a female singer in Afghanistan, I do not go out a lot and pretty much cannot. I simply do not have the freedom to do the same as an average individual. In Afghanistan, a woman who challenges the norm and carries out certain initiatives like fighting for women’s rights and voice out major issues is in great risk of danger. Even when I attend TV shows I mostly avoid going outside the set.

I am in my hotel room a lot of the time and I am usually busy with my future projects. I will be working on making new songs and compositions to empower the women of Afghanistan as I intend to use music for a cause. Either that or go on social media and interact with my beloved fans through my Facebook page – preferably go live.

I also try to think of ways in which I can make the situation of Afghanistan better for my people, especially for the women. The ladies here have to go through so much anguish and agony just to even go for a simple walk. 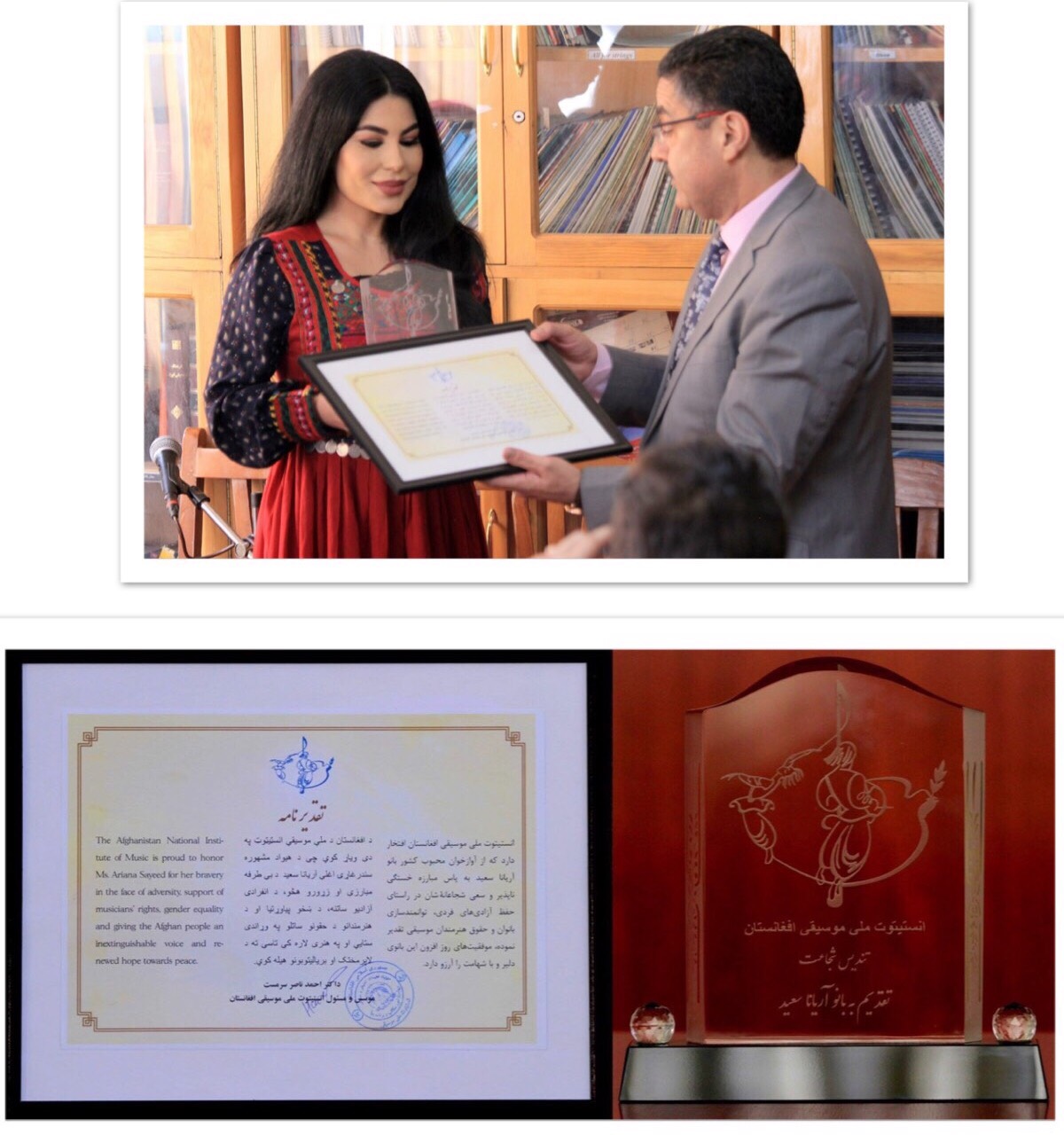 Aryana Sayeed receiving the ‘Bravery Award’ in Afghanistan given by the Ministry of Education and the National Institute of Music.

Back in London, I normally go shopping, enjoy a nice meal at a restaurant and go to the movies. At home, I usually cook for my beloved mother and go around for some walks. I love to have a stroll in the open air and have a moment to myself.

When I do roam around outside it’s for very exceptional purposes. I often go shopping to buy clothes for any reality TV shows or concerts that I’m a part of. I generally design my dresses myself then get them custom made by the talented tailors in Afghanistan.

I occasionally prefer to wear our own traditional clothes when attending reality TV shows or concerts. We have some of the most beautiful and most colourful attires, especially for the ladies. Maybe now and again I’ll be working on filming a new music video as Afghanistan has some beautiful locations.

I am extra cautious when I’m outside and I fully cover myself as I have some hardcore enemies in the form of extremists. But even that does not help at times – people still manage to somehow recognise me – they gather for photos and just want to introduce themselves. I believe the biggest fan base I have on this planet is Afghanistan! There are literally millions of people showing so much love!

Generally, I go around Kabul in a normal vehicle but after my recent movement – performing in the ‘Afghanistan Independence Day’ concert I literally had to go around in a bulletproof armoured car with bodyguards. All because I was receiving serious major death threats from many oppositionists on the day of the event.

Many extreme mindset individuals just do not favour the artistic and cultural programs to take place in the country, particularly when a female takes part. I honestly thought that I would never stand on stage and sing again.

It was a major blessing to be honoured with a ‘Bravery’ award given by an official Government entity – Ministry of Education and National Institue of Music after all the extreme intimidations, particularly during the historical concert on August 19. I felt really honoured.

Many extreme mindset individuals tried to stop the Afghanistan Independence Day event but failed. It is probably the most valuable award of my entire artistic career. It definitely is something that gives me hope for a better future for Afghanistan. I acknowledge it as a step forward towards a better life for the women of the country.

By nightfall, I tend to be exhausted as I normally come from the TV sets having filmed shows like Afghan Star or having finished performing a concert. Before sleeping, I might upload some photos on my social media page, mostly Facebook. It is usually photos that have been taken from various events of the day, for example, concerts or TV shows. My fans love it and I often get asked about my clothes.

I manage to go to bed in the late hours of the night and usually think about how I can push myself to take things to the next level as well as what can I do to bring a big change in the lives of Afghan women. Particularly now when I have achieved major recognition and appreciation for all that I do in Afghanistan especially in the music field. Life for me here in Afghanistan is empowering and fulfilling regardless of it being a challenge.”