Why change is nothing new at The Guardian 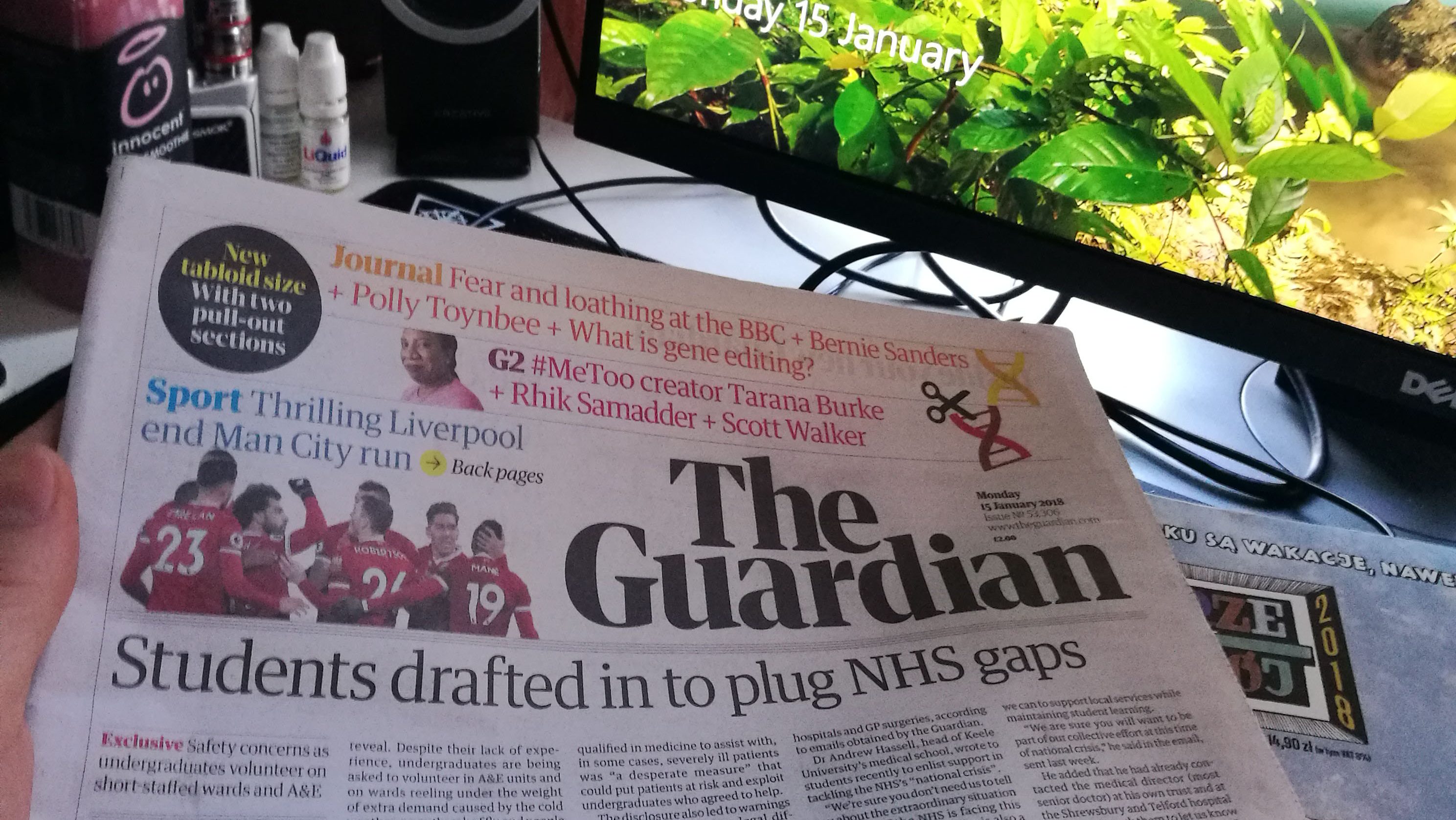 Seemingly, everyone from top newsrooms to your local newsagent is either surprised or baffled by The Guardian’s new attire.

By changing to a tabloid format, dropping the blue strip and changing the logo font, the editor of the paper, Katherine Viner, seeks to reinvigorate the sales of a now less expensive daily, while also saving money.

This is not the first time The Guardian has changed its form so drastically. Here’s how it looked in the past. 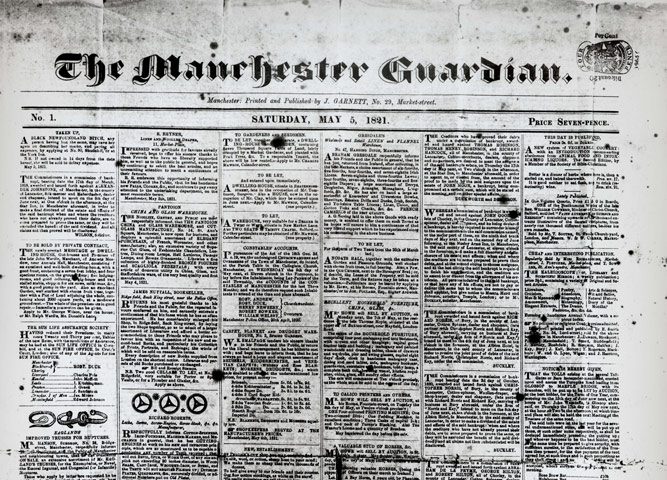 Cover to the first edition of The Manchester Guardian – May 5, 1821 [Wikimedia Commons]

The Manchester Guardian was launched in 1821, and was a very different paper compared to the modern one. Liberal, yet casting the views and influence of a group of wealthy individuals, it was criticised by more radical Mancunian newspapers of the day.

Created by a cotton merchant John Edward Taylor, it passed into hands of Taylor’s son, who died childlessly. The then-editor C.P. Scott acquired the paper from the Taylor estate in 1907, and his 57 year-long editorship projected the Manchester Guardian to national recognition. 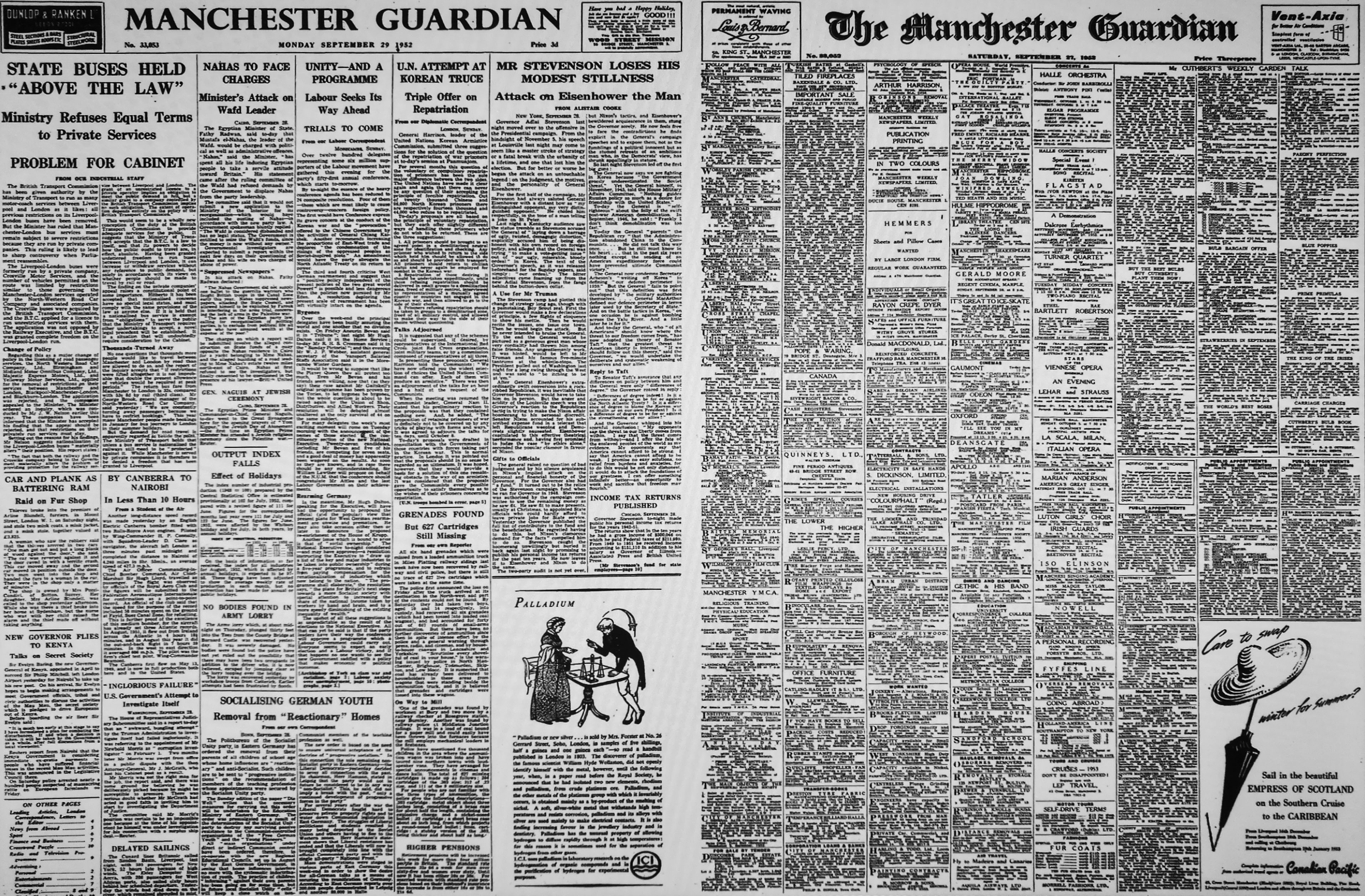 On the left, The Guardian after the 1952 redesign. On the right, the initial version [Bartosz Kielak]

The major change arrived in 1952. Before that the Guardian’s front page was reserved for classified advertising. The common perception was that front page news should be left to tabloids, not to widely respected newspapers like the Manchester Guardian.

The refurbished front page, topped with a new masthead (logo), featured a limited amount of advertising alongside the lead stories of the day. The technology, however, had not changed, the paper was still printed with an old-fashioned hot metal typesetting in Manchester and distributed from there.

This technology was prone to spelling errors, earning the newspaper a nickname The Grauniad. Changes were overdue but nonetheless welcomed by the readership. Some people though voiced similar complaints to those heard today, one letter said: “I cannot see why you have changed the traditional lettering of the title. The old printing of the title was unusual, distinctive, and very attractive. The new one is utterly commonplace.“ 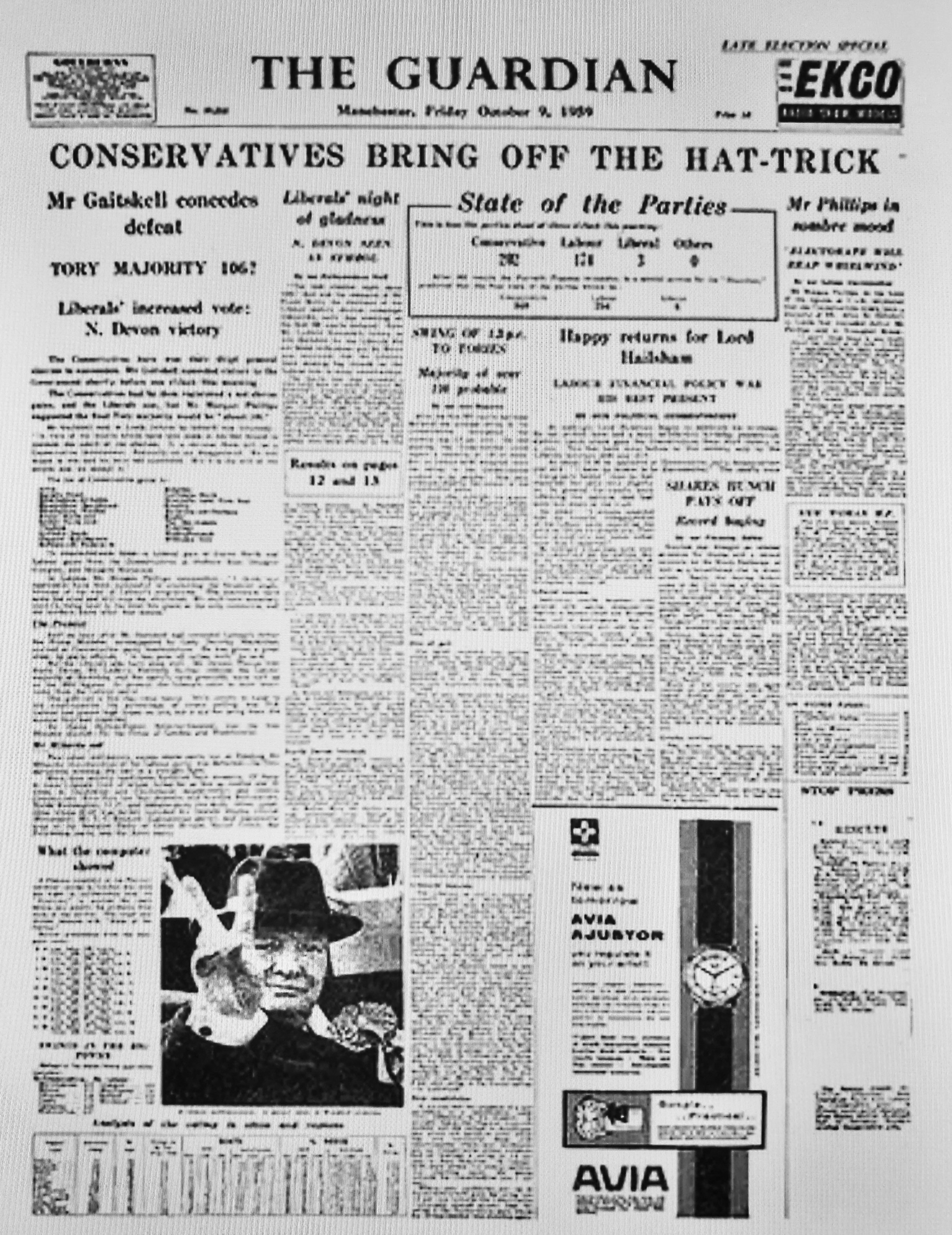 What a shock to this reader seven year later when the paper dropped “Manchester” part of the masthead, in 1959, with a move to London to follow.

It was also that year that Conservatives have claimed their third electoral victory in a row, but at least the Nobel Peace Prize went to the Labour party member, Philip Noel-Baker.

The following years were marked by poor revenues, which The Guardian weathered only thanks to a steady performance of its sister paper, the Manchester Evening News.

The situation was desperate, and even a merger with The Times was considered for a while. Initially targeted to a middle-class reader, the newspaper has consolidated its centre-left stance in the 70s and 80s. 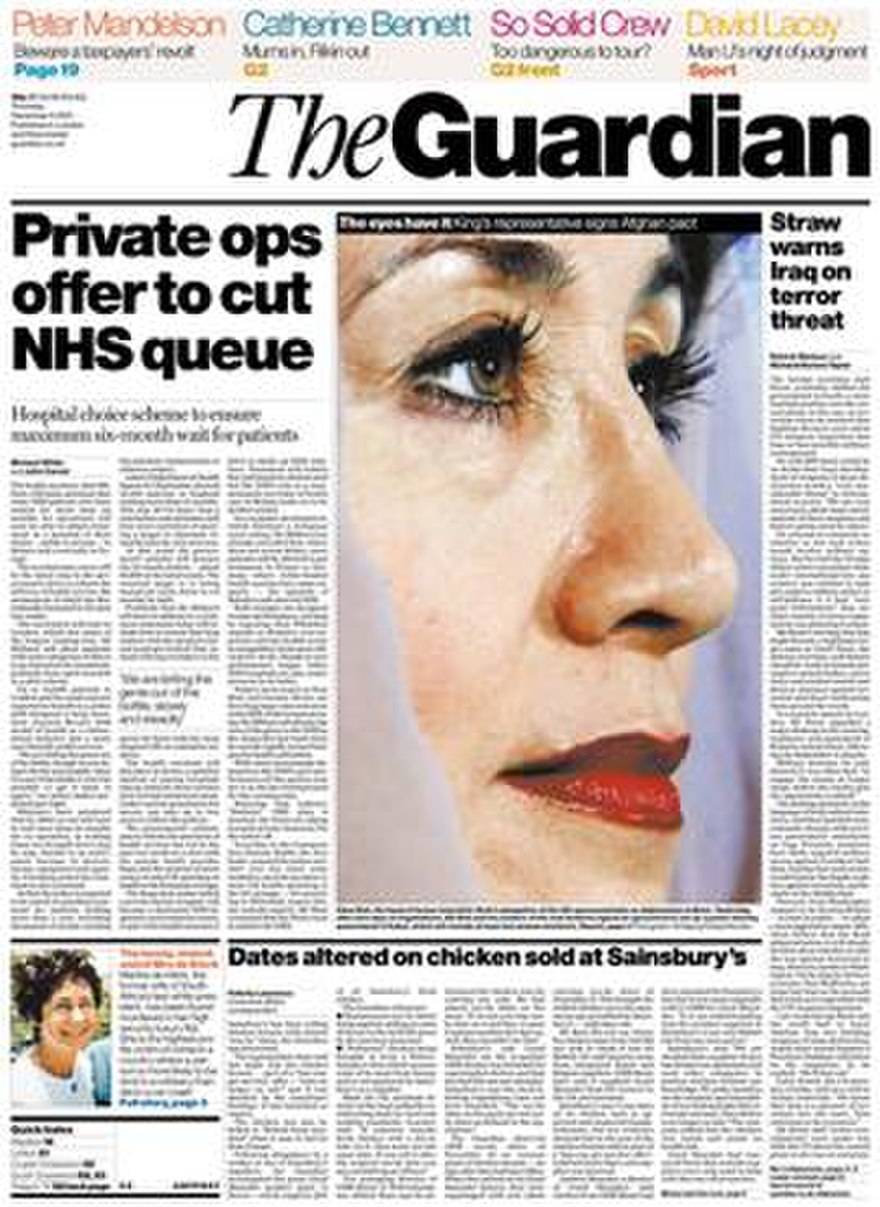 The Guardian’s front page in 2001, featuring the design launched in 1988 [Wikimedia Commons]

Under Peter Preston, a long-time editor of The Guardian, who passed away at the start of 2018, the paper faced many challenges, the biggest arising in 1986 with the launch of a new competitor, The Independent.

This challenge, in turn, re-invigorated the market, leading to a full redesign of The Guardian.

A Helvetica font was used in the new masthead, the second most notorious use of the font in the UK history after Brexit referendum Remain side government’s leaflets.

Still, no blue strips adorned the top of the front page. One other innovation under Preston was a G2 weekday supplement, printed in a tabloid format. Other newspapers followed suit.

As Alan Rusbridger, The Guardian’s editor between 1995-2015, was quoted saying: “Within months, both the Independent and the Times had launched their own versions, and newspapers across Europe started springing up with sections branded R2 or C2 or M2 or whatever.” 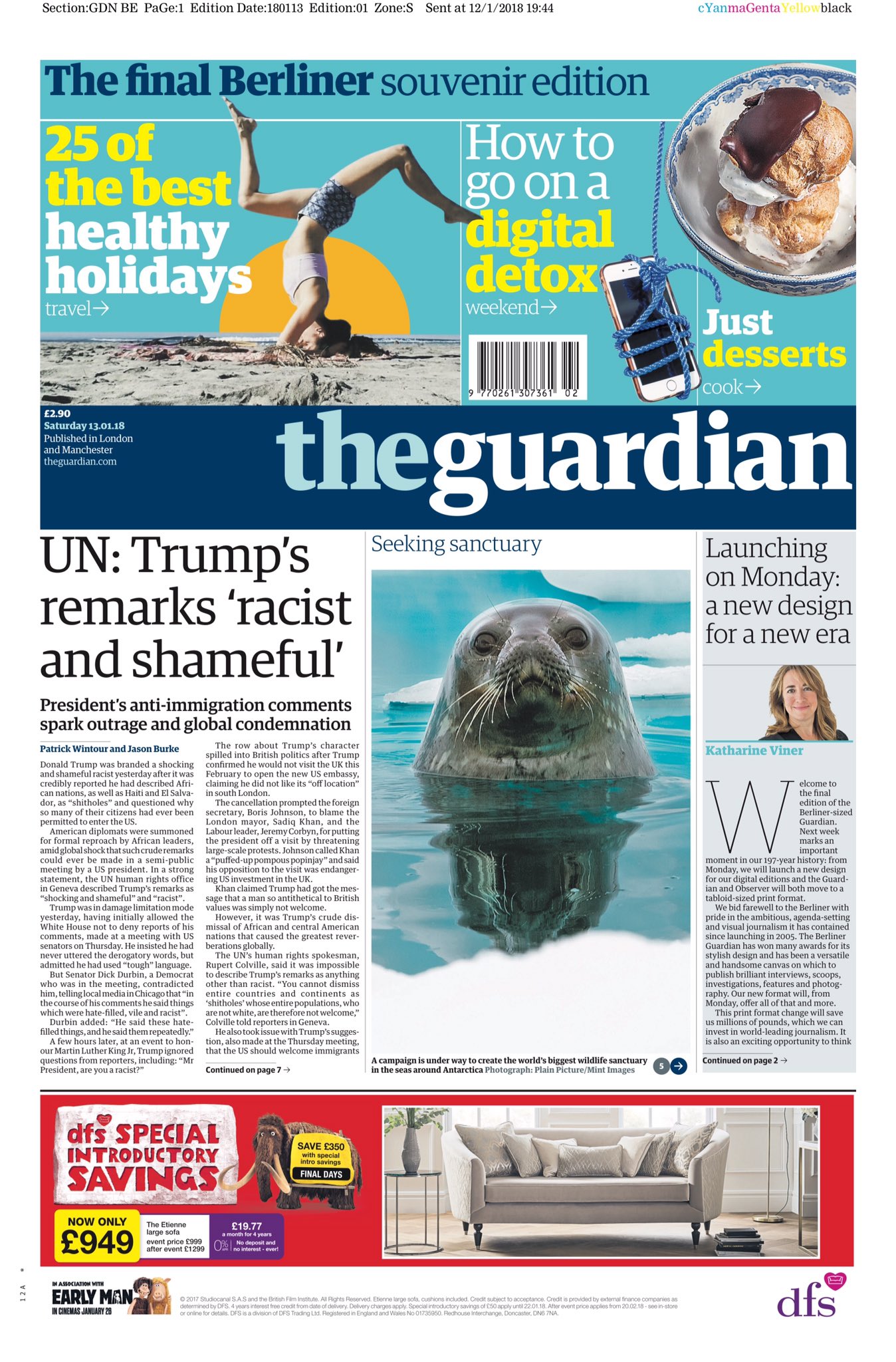 Ten years into Rusbridger’s editorship, in 2005, The Guardian has relaunched in a Berliner format, which is smaller than a broadsheet but bigger than a tabloid, at a cost of £80 million pounds.

The transition took 18 months of preparation. It was the first time a British national newspaper would print in a mid-sized format. A whole new set of over 200 fonts was commissioned from Paul Barnes and Christian Schwartz, including the Guardian Egyptian, and an iconic blue strip made it into the background of the all-lowercase logo.

In 2006, The Guardian was awarded a title of the best-designed newspaper in the world. Unfortunately, the now-global internet access was consistently undercutting the advertising revenues, something The Guardian just made another move to deal with. Sadly, this was followed by 300 staff losing their jobs in the next three years.

Within 12 years the Berliner format was gone as well, and on January 15, 2018, The Guardian relaunched as a tabloid with a new masthead and a new design.

“The masthead has a renewed strength and confidence to represent the Guardian’s place and mission in these challenging times,” wrote Katherine Viner explaining the move.

If we were to dig deeper into that, on the 10th anniversary of the launch of G2 in 2002, Peter Preston asked rhetorically “Why did ‘tabloid’ mean ‘downmarket’ here?” He added: “It didn’t in France (Le Monde and Libération) or Spain (El País) or Italy (La Repubblica) or even America (Newsday). Serious papers could make good use of smaller page sizes.”

Perhaps, like the 1952 change of the front page that liberated it from excess advertising, the 2018 redesign was long overdue, and crucially, long time in making. How the readers will respond to the new, punchy masthead and zingy orange links on the website – time will tell.

I, for one, can’t yet get used to my browser tabs’ bar missing the lowercase ‘g’ on a blue background.

Why change is nothing new at The Guardian

In conversation with | Alan Rusbridger