Art as a mode of expression is not a concept that is new. In fact, since the very origins of art itself we can pin down self expression as the greatest muse of all.

Whether your art form is visual or audible, being able to portray your thoughts in a way that comes naturally to you is something special. Not only can it be satisfying, but uplifting for those who are able to be on the receiving end of said expression.

This form of expression also plays a crucial role in the way in which we understand and unpick important topics. Identity is one of these topics. PIECES is a body of work devised by an all-female cast who set out to solidify their own identities through expressive arts – namely moving image, dance and spoken words

The piece was performed in the Ravensfield Theatre, a small and intimate space. Benches similar to the ones that can be found in any primary school sports hall were placed round the edges to form a square.

In the centre of the square was the stage, where each of the 14 artists were to perform. The piece was comprised of 12 mini performances, a mixture of solo and group. 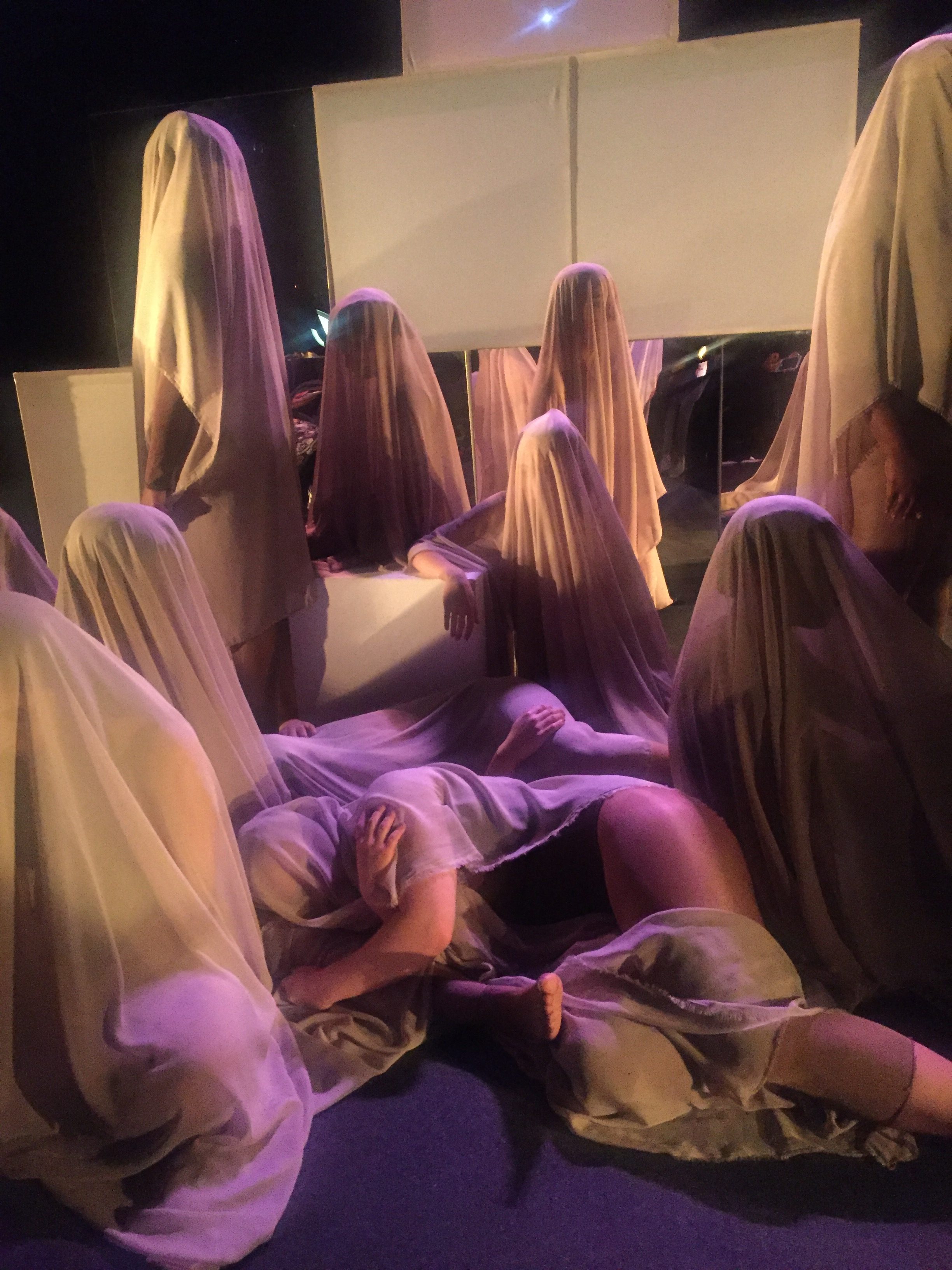 The performance illustrates the importance of identity, without it we all begin to resemble one another [Denieka Lafayette]

PIECES began with all of the actresses covered over and frozen in one spot as depicted in the image above. Next, one-by-one they took to centre stage to portray life experiences that they believed had important in forming their identity.

Identity is something specific to every individual; so as you can imagine each expression was very different. The majority of the cast chose to use words to tell their story of self. Monologues as well as spoken word we’re performed by several of the females. Whilst others relied on anecdotes and pre recorded interviews portrayed via projector.

Self-perception, sexuality, religion and mental health were the main themes that arose during the performance. Self perception in particular, seemed to be a reoccurring theme within several of the individual performances.

Although the majority of PIECES was made up of dialogue, there were two parts within the performance where dance and role play were embedded.

Role play was used to act out some scenes which for most of the crowd were incredibly hard hitting. One of the actresses re-enacted the brutality of the sex work trade, dragging her body across the floor and even causing burns from the friction between her body and the carpet.

Rope was used to fasten her wrists together and another piece in her mouth, preventing her from speaking. This was an emotional moment. Many of the crowd members winced, but seemed unable to actually stop themselves from watching.

Dance was used by three members of the cast. A dance that they performed together three times, at the start, mid point and end of the performance. In the closing dance, the speed of the movements became faster and far less rigid, as if to represent the freedom of the women as they had expressed themselves and told their stories.

PIECES was a fantastically orchestrated piece of art. Crafted organically. So organically in fact that many of the emotions evoked within me whilst watching can till be remembered vividly as I reflect.

It made a number of points: Everything shown to the audience was personal to someone; that level of honesty form the cast was incredibly touching. Additionally, the intimacy of the venue added greatly to the atmosphere. It was up close and personal, reflecting the impact of the deep themes raised in the piece.

Words alone are often an over looked art form; as people seem to expect more extravagant expressions of self these days. However, PIECES was largely reliant on words to carry each narrative and this simplicity was extremely effective.

I had a chance to speak to one of the cast members Taja at the end. Click the link following to hear her personal thoughts on self expression and her own experiences:

PIECES was a stripped back, true and relatable story. Art like this emphasises the importance of self expression. Not only as a measure of self healing, but also as a way to heal others.