FakeApp is a new application that can create AI generated material such as accurate facial reconstructions and then apply them to a video or other moving image.

Whilst Adobe’s Photoshop and other programmes have been able to produce fake, yet extremely convincing still images for years, the realistic doctoring of moving images has been limited to those with a phenomenal budget or professional CGI teams – until now.

In simple terms, FakeApp works by using thousands of images and videos of the person’s face a user is trying to fake, in order to build an AI generated model that can then be applied to a video of the user’s choice. FakeApp’s creator, an anonymous Reddit user, says “FakeApp is a desktop tool for creating DeepFakes”

DeepFakes is the term used by its community for the resulting edited videos.

Some of DeepFakes content is created for comedic purposes – when FakeApp was made available in January 2018, a spout of videos surfaced online replacing characters from popular films with the legendary Nicholas Cage; one even replaces Cris Crocker in the 2007 viral video “Leave Britney Alone” with the Hollywood star.

US President Donald Trump has also received the DeepFake treatment, with his face being transferred to the body of Dr Evil from the Austin Powers films. Whilst President Trump would likely shrug such images off as “DeepFake news”, and the appearance of Nicholas Cage in all of your favourite films is clearly jovial, the realism of some of the videos is quite incredible – which is where a problem arises. 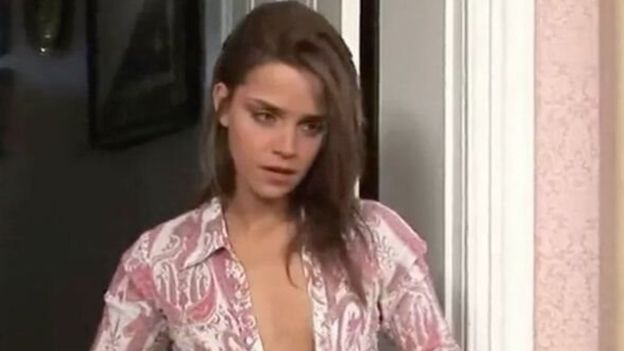 Celebrities such as Emma Watson, have had their faces convincingly edited into pornographic material [Reddit:Anon]

Whilst the quality of the application of the celebrity’s face varies, the right body shape and skin tone can make some pornographic DeepFakes incredibly convincing. Currently, the process of creating a five minute video on FakeApp can take hours if not days, but as the software becomes more popular, that time will surely decrease.

Other websites, including Gfycat and Twitter, who usually allow hardcore pornographic material on their platforms, have also said they will remove DeepFake content as the videos breach their terms of service agreements.

Aside from the clear immorality of creating a pornographic video depicting a person who has never consented to being in such material, the widespread creation of DeepFakes, and the use of FakeApp could set a worrying precedent for the future of such computer technology.

As if the internet wasn’t already constantly awash with hoaxes and full of people ready to believe them, in a few years time there is the possibility of not being able to distinguish between what is legitimate video evidence and what is a DeepFake.

As the progression of the software to an automated “one-click” system took only a month, the possibilities of FakeApp are ominously endless. Videos could be created that deceive governments and cause conflicts and innocent people could be accused of illegal acts.

To put it briefly – fake news could be about to get a whole lot more convincing.

By Sophie Patrick
7 Mins read
An in depth look at and personal accounts of the effect that Ticketmaster had on Taylor Sift’s “The Eras” tour, and what has happened since the fateful presale.
Life

By Trinity Francis
5 Mins read
How to find time for and afford work experience and how to make yourself stand out from the crowd.
21st-century trends

By Maheshwari Vickyraj
6 Mins read
Is the sad girl subculture still relevant in 2022?